While the nearly 800 recent campaign ads mentioning energy or climate come from a fairly even split of Democratic- and Republican-affiliated advertising outfits, the specifics of their rhetoric paint differing pictures of the parties’ priorities. Those coming from left of center are more likely to mention climate change and renewables, while those from the right are more likely to mention fossil fuels, according to a database of television ads that have aired since the spring.

The GOP has demonstrated a willingness to spend more per ad, investing an average of $177,454 versus the Democrats’ $114,394, per an analysis of the data provided exclusively to Morning Consult by Advertising Analytics LLC.

It spans April 9 — the day after Sen. Bernie Sanders (I-Vt.), Democratic presidential candidate Joe Biden’s last major primary rival, dropped out of the presidential race — through Oct. 21, and covers both state and nationwide races. In that period, 768 total advertisements have run that reference energy- or climate-related topics, exactly half of which have come from Democratic operations, 40 percent from Republican and 10 percent from independent companies or organizations. 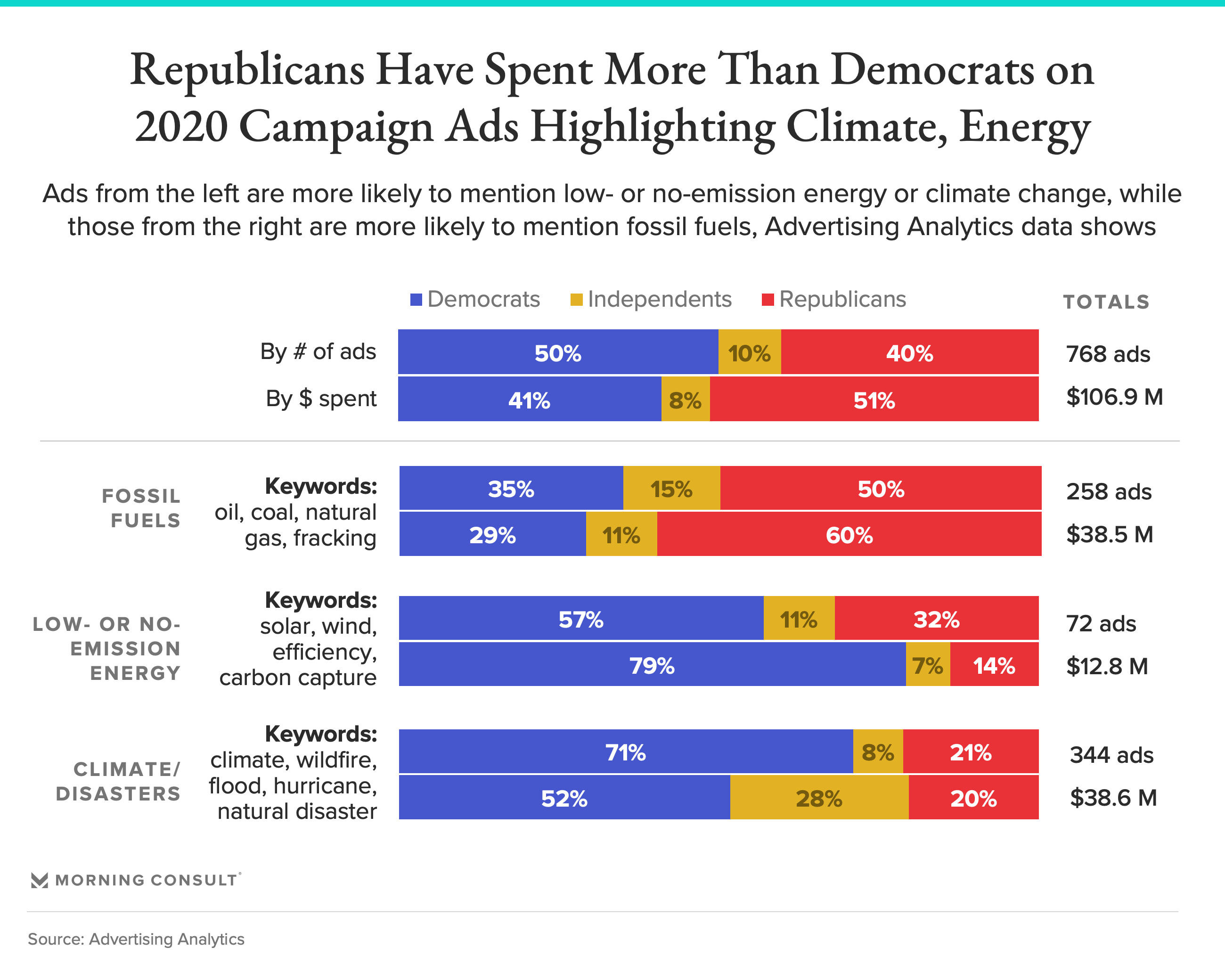 Language that referenced climate change and natural disasters — specifically keywords such as “climate,” “wildfires” and “floods” — appeared in 244 ads from Democratic advertisers, 73 ads from Republicans and 27 ads from independent establishments. In total, these climate-related ads have cost $38.6 million.

A preponderance of the left-backed climate ads came from the Biden for President operation, many of which push the former vice president’s Build Back Better plan: Small businesses “will purchase clean energy technologies to fight climate change, enhance national security. We have to invest in what the jobs and technologies of tomorrow are going to be,” he narrates, framing the pandemic as an opportunity to rebuild.

More of the ads mentioning fossil fuels such as “oil,” “coal” and “natural gas” came from Republican outfits (129) than Democratic (90), with the right investing more than twice as much in these advertisements, to the tune of $23 million to $11.3 million. The Democratic ads are more likely to refer to “Big Oil” or otherwise imply that the industry has corporate ties, while those from Republicans describe the fossil fuel sector as one meriting government support: “Jim is a coal man; he truly cares about coal miners and protecting our jobs,” says one ad for West Virginia Gov. Jim Justice’s re-election campaign.

Related: For Decades, the GOP Has Fought Against Climate Action. ‘Eco-Right’ Groups Are Working to Change the Conversation

Conversely, Democrats dominated the ads mentioning renewable energy, energy efficiency and carbon capture and storage: technologies that are proving to be an increasingly large part of the energy transition to no- or low-emission sources. On these ads, the left spent $10.2 million to the right’s $1.8 million.

Meanwhile, ads for Republican-backed candidates were far more likely than Democratic ones to mention the Green New Deal, casting aspersions on the 14-page progressive policy platform that has yet to become an actual bill but has already figured into the partisan tug of war on energy policy. But aside from co-sponsor Sen. Ed Markey (D-Mass.) and a few others, most Democrats have avoided touting the platform as a part of their campaigns, perhaps worrying it remains too vague or that the public has too many misconceptions about it. Democrats spent $719,559 in total on their nine Green New Deal-related ads. 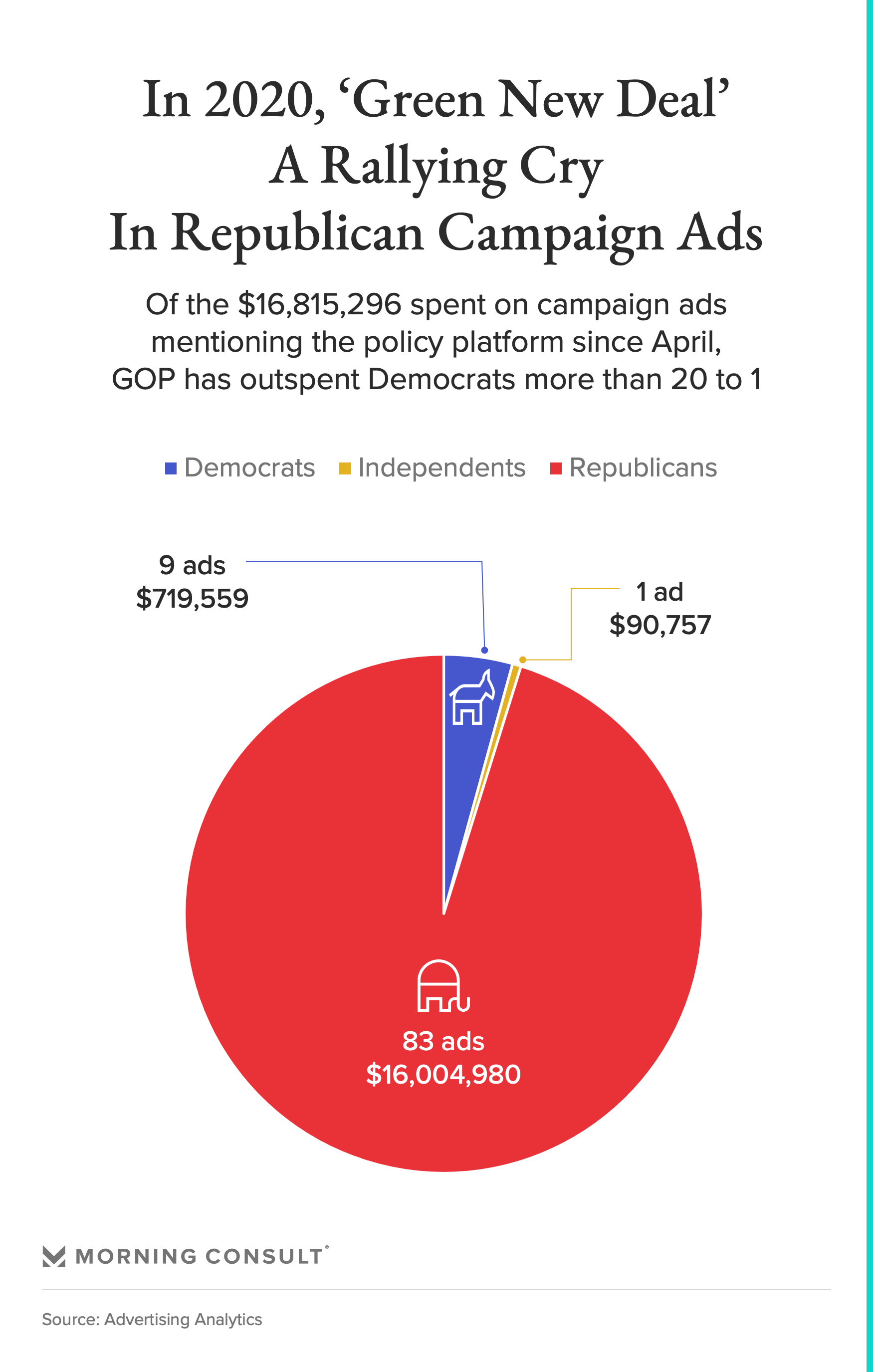 However, Republicans have seized upon the broad potential scope of the platform in their appeals to voters in 2020, with their $16 million accounting for 95 percent of the total dollars spent on ads mentioning the Green New Deal.

And the only energy- or climate-referencing advertisement directly from the Trump for President group was another that referenced the platform. In a campaign that only aired 19 times in total, the narrator says that “Joe Biden is pledging to spend trillions of your dollars on the job-killing Green New Deal” — which Biden has never explicitly backed, though it bears some similarities to the energy tenets of his Build Back Better campaign.

The ads with Republican origins are also likely to couch the platform with words like “extreme,” “radical,” “socialist” or even “communist.”

For instance, a Senate Leadership Fund advertisement countering Jon Ossoff (D) in his increasingly competitive run for the Georgia Senate seat against incumbent Sen. David Perdue (R) says the Democrat has “praised the authors of the Socialist Green New Deal, which would raise electric bills, costing us thousands more” (citing a February 2019 study by the conservative Heritage Foundation).

Nearly a third (225) of the ads have come since Oct. 1, as the campaigns make their cases with extra vigor in the last full month of the race.