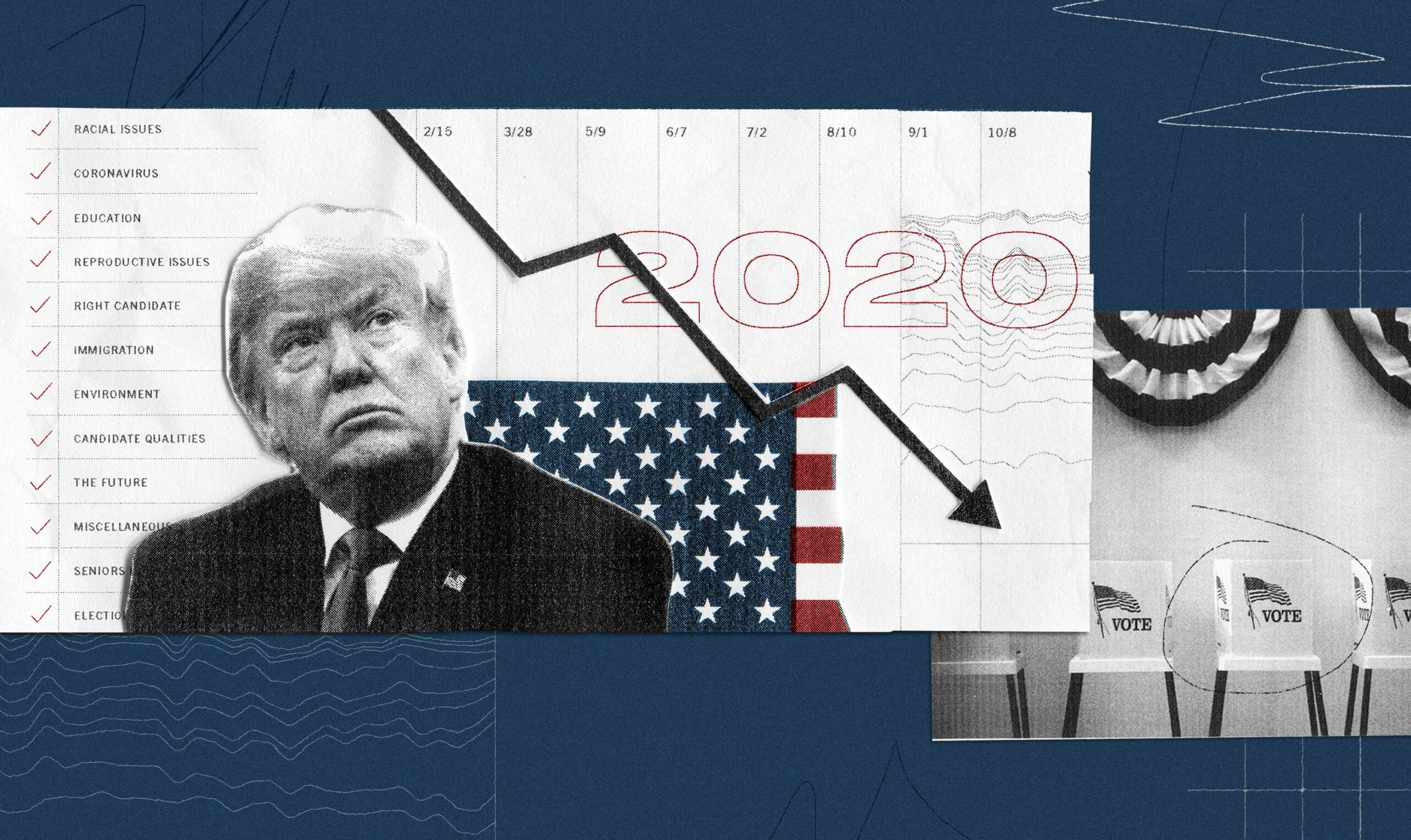 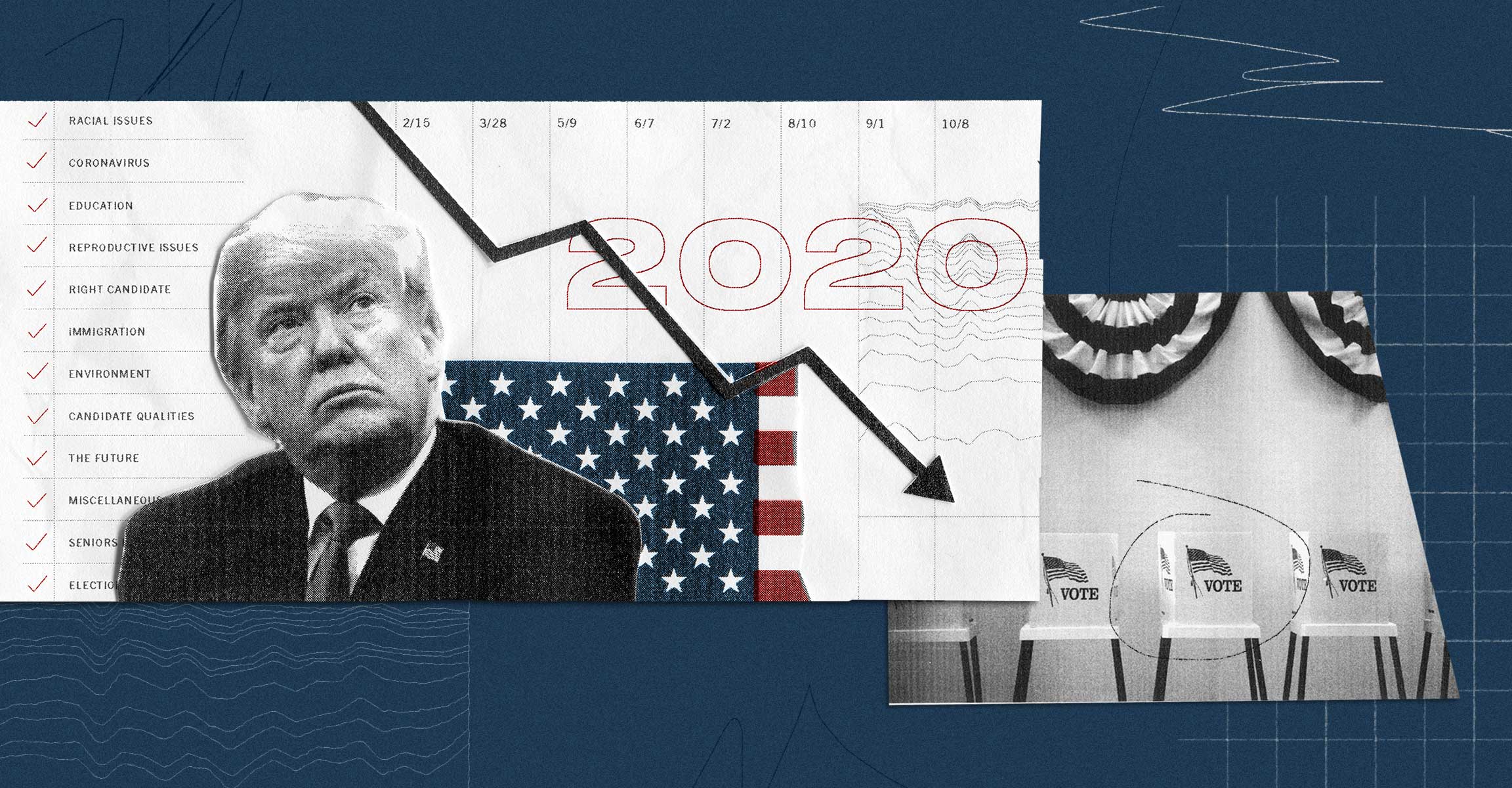 In the American Public’s Eyes, 2020 Has Been About Trump — to His Detriment

The 2020 presidential election was largely going to be about President Donald Trump. Now, a new analysis of more than 70,000 open-ended survey responses, conducted over the course of one of the most tumultuous years in modern U.S. history, underscores this truth and reveals how much of the public’s animosity for the president has taken precedence over everyday issues.

Understanding exactly why people vote the way that they do is a complicated and imprecise discipline. Survey respondents could be echoing campaign promises back to pollsters, for example, or be unaware of the factors that shape their decisions. Providing a blank space, as opposed to predetermined categories from which poll respondents choose, can render more organic feedback into how and why Americans are picking which candidate to vote for.

In 34 weeks this year, Morning Consult gave roughly 2,200 U.S. adults a blank space to answer this question: “Specifically, what is the one main issue you are concerned about when casting your vote for the 2020 presidential election?” 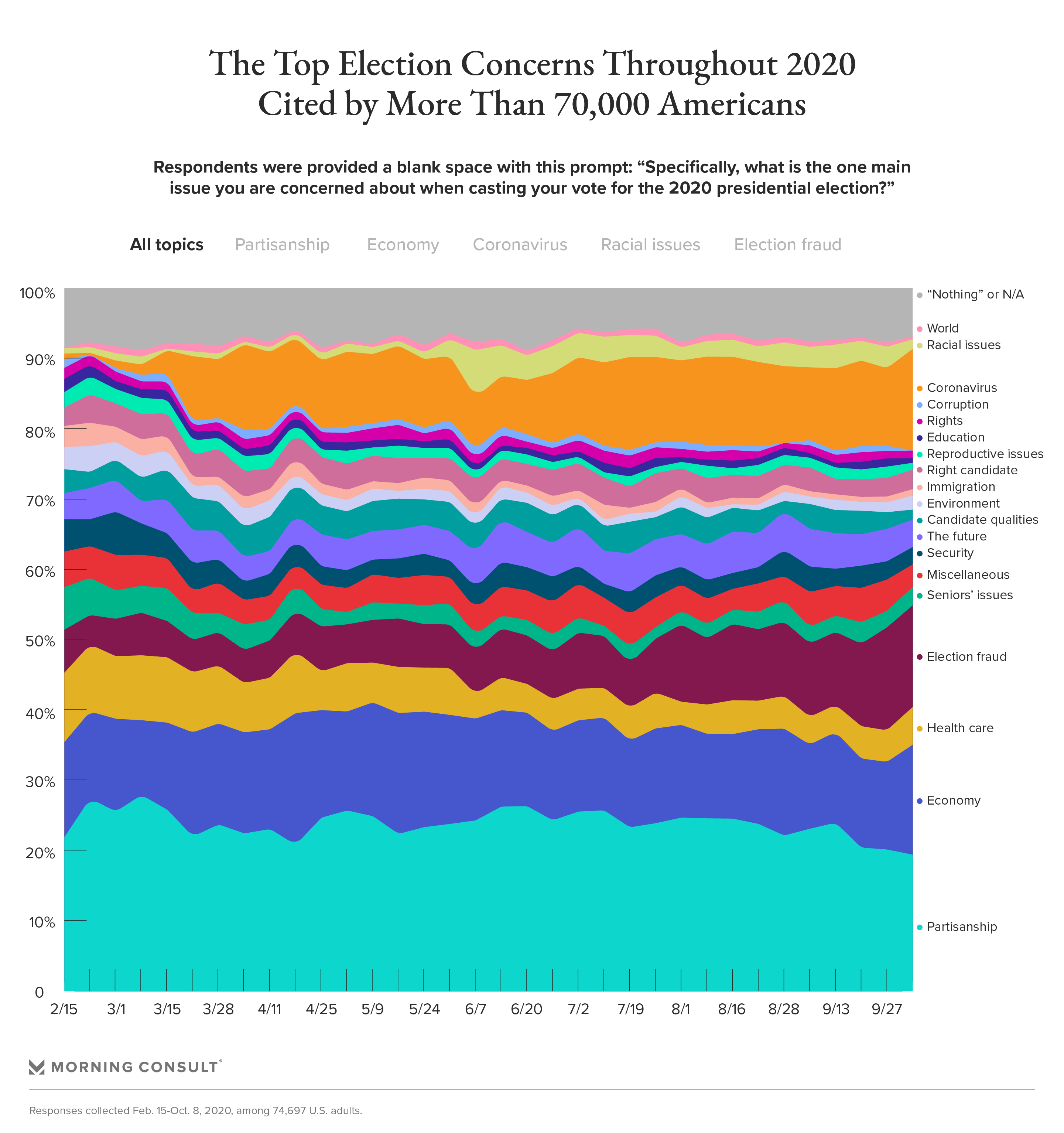 The results, analyzed in part by Morning Consult’s new machine-learning technology, reveal that respondents most commonly wrote something partisan, be it about a political party, an ideology or a candidate. Specifically, they wrote about one person: “Trump” appeared in roughly 14 percent of all responses, more than any other word.

That stands in contrast to the first iteration of this open-ended analysis in January — before the Democratic presidential primary kicked off in earnest with the Iowa caucuses — when the share of top election concerns categorized as “partisan” — ranked behind the economy, security issues, health care and seniors’ issues such as Medicare and Social Security. 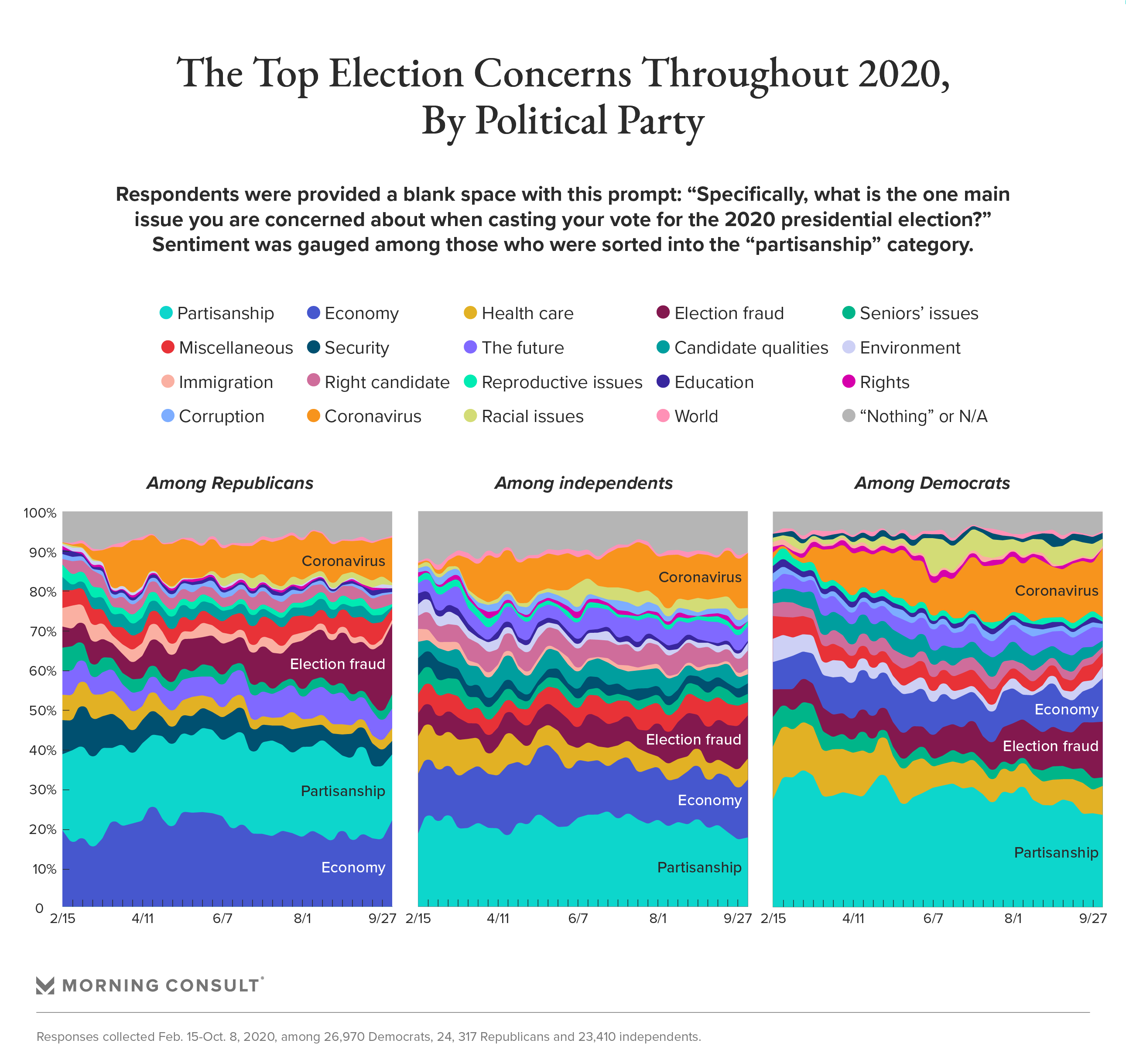 The partisan focus endured throughout the project’s Feb. 15-Oct. 8 fielding period. As the country underwent historic health and economic turmoil caused by the coronavirus pandemic and faced a national reckoning on racial bias in the justice system, “get Trump out of office” was a common refrain.

Matt Grossman, director of Michigan State University’s Institute for Public Policy and Social Research, said during any re-election campaign, voters are mostly assessing the incumbent president’s record, but this year stands out because while voters often lean into issue-based stances for explaining their vote choice, these survey respondents were more candid about the partisan motivations driving their decisions.

“I would say it’s less typical that voters would be so upfront about their partisan considerations,” he said.

While it isn’t unusual for this much focus to be on the sitting president, Steven Webster, an associate professor in Indiana University’s political science department who specializes in political behavior and public opinion, said Trump’s polarizing and often unpopular approach to leadership is abnormal. 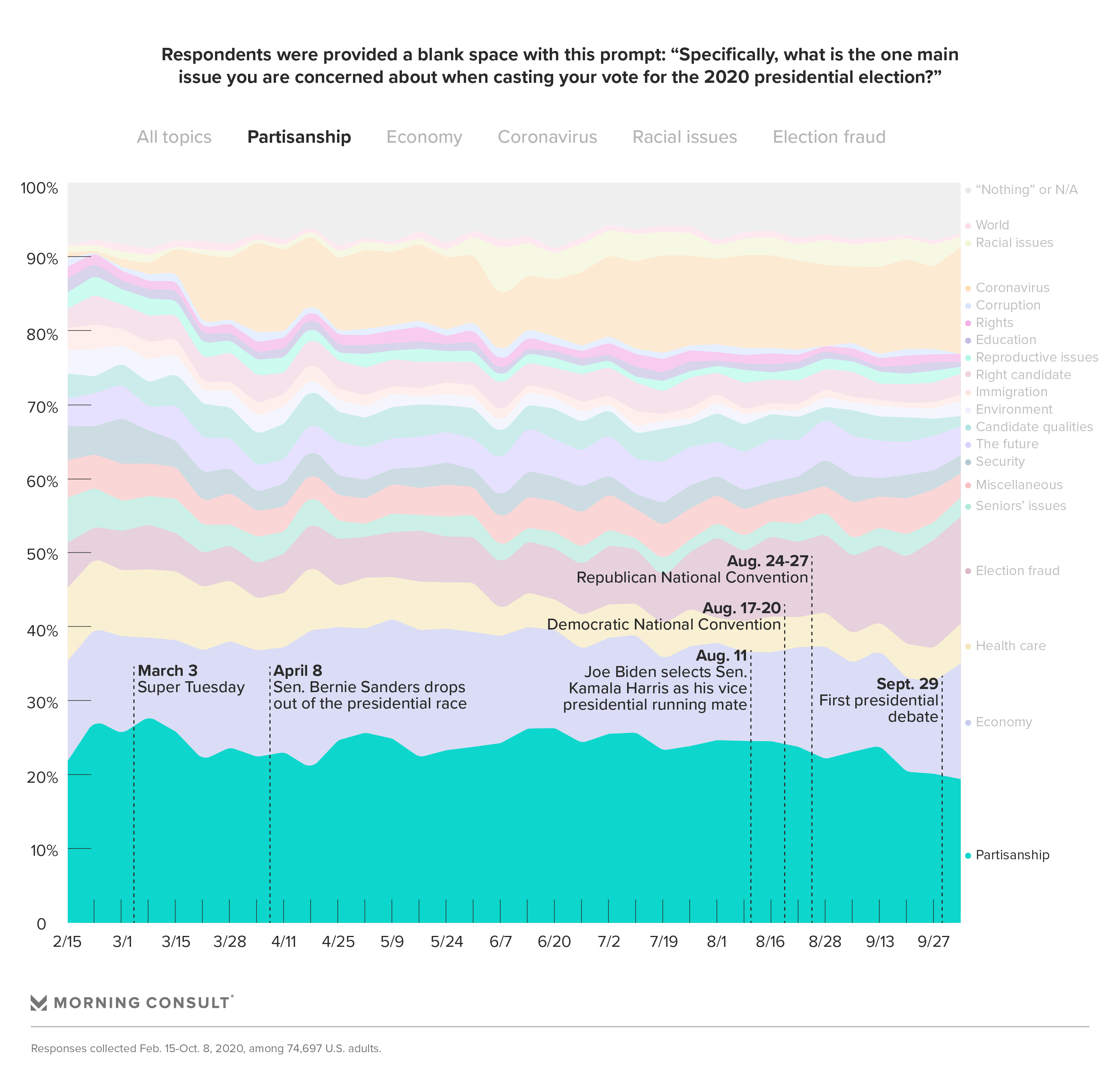 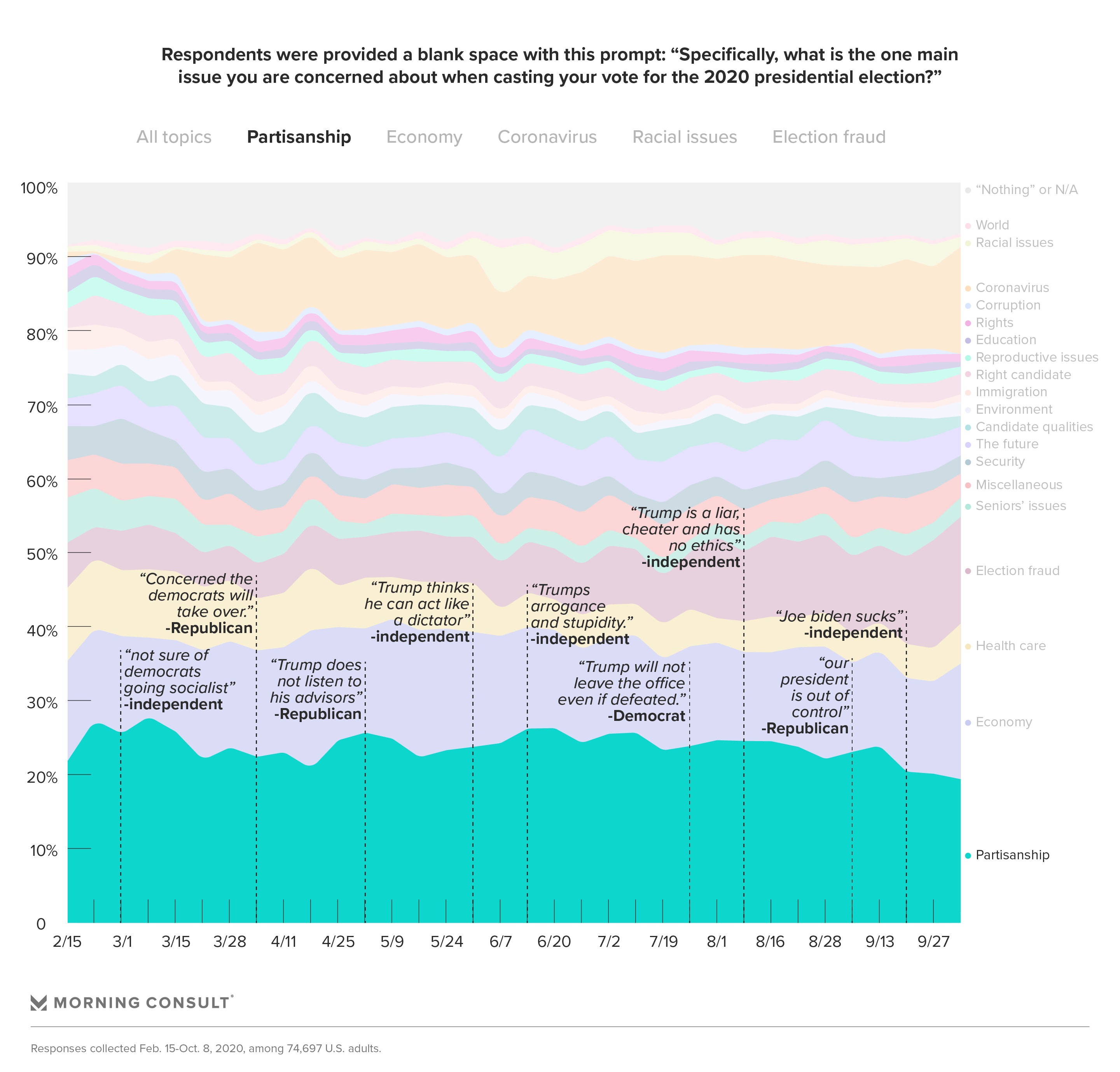 “For better or for worse, he sort of sucks up the oxygen in the room,” said Webster. “It’s really hard to even think about politics these days without thinking about Trump.” 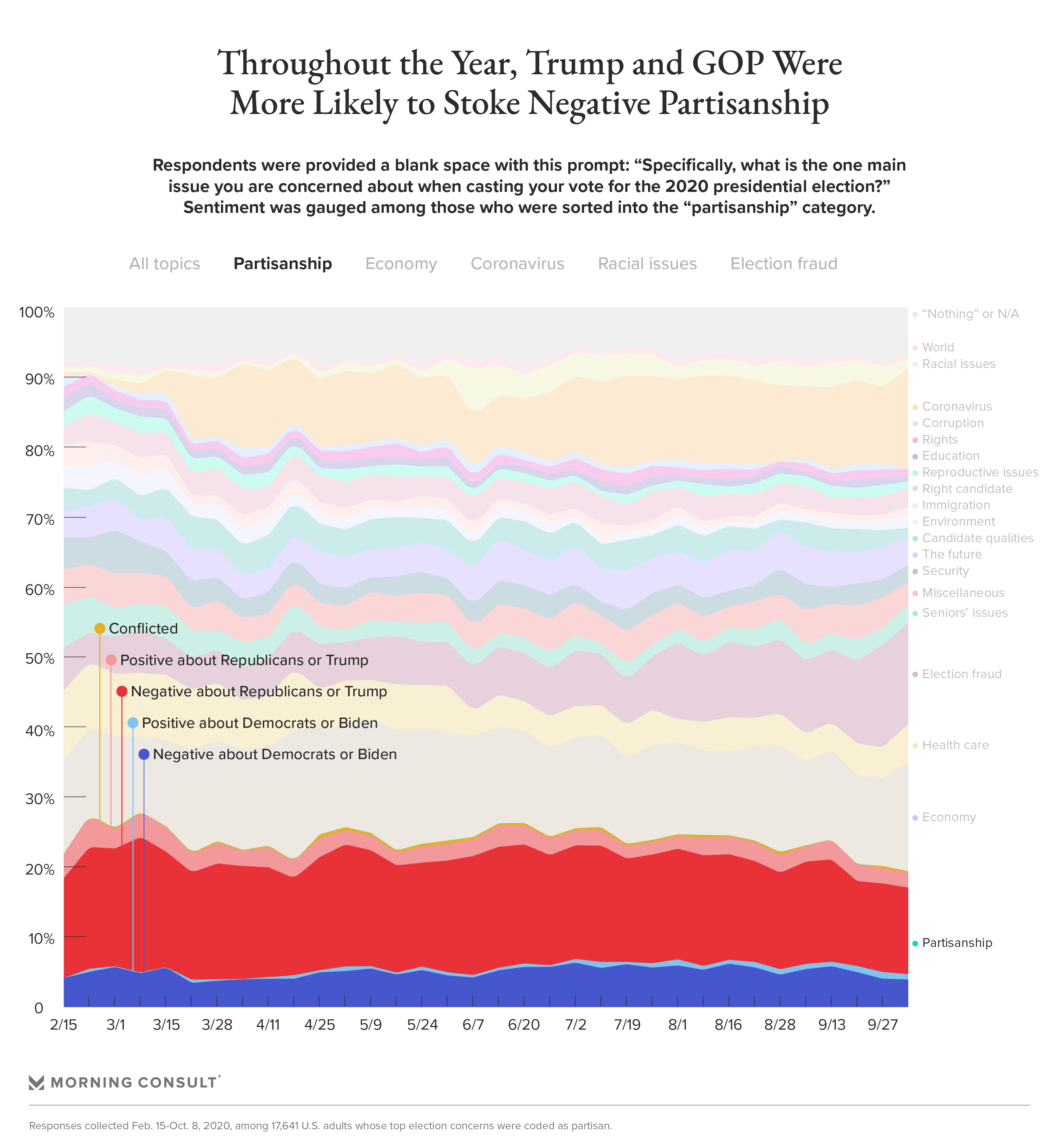 Of those Americans whose top concern was related to partisanship, most were critical of the president, according to Morning Consult’s new technology that gauged whether sentiment expressed by 74,697 respondents was positive or negative.

Taken together, those discrepancies — fairly steady week over week — reflect the extent to which the 2020 contest has been framed around Trump.

Biden, a white man with relatively moderate positions who frequently yearns in stump speeches for a return to an older political era of bipartisanship and civility, was a safe choice for Democrats. Sens. Elizabeth Warren of Massachusetts and Bernie Sanders of Vermont — Biden’s more liberal and combative rivals from the Democratic presidential primary — would have elicited a harsher reaction from respondents, Webster said.

“If one of these two candidates had gotten the nomination, the election would be more of a choice than a referendum,” he said, noting Biden’s popularity with independents and some disaffected Republicans. 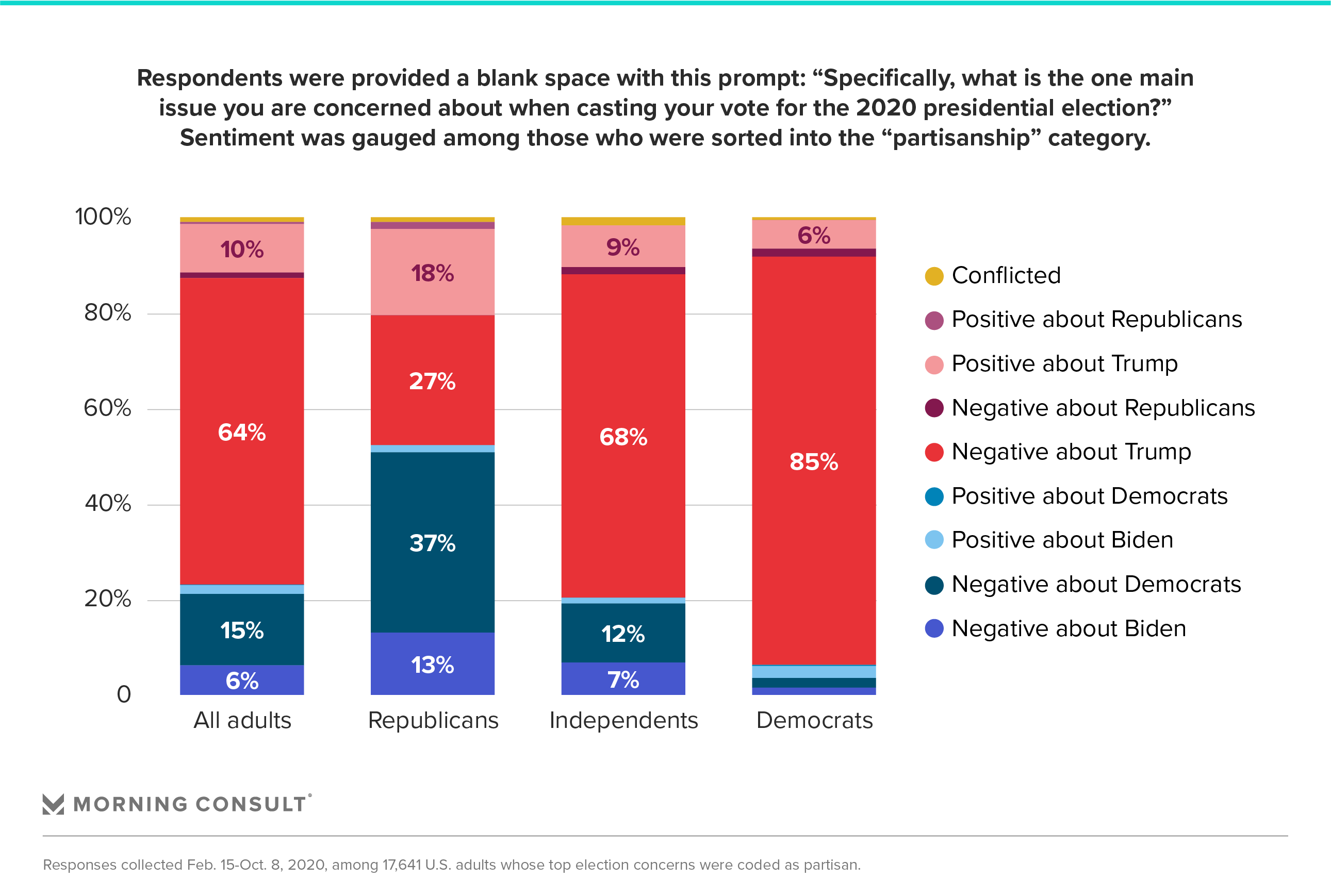 The increasingly polarized nature of the electorate has made independent voters a more critical swing group. Similar to findings from the broader sample of Americans, independents who wrote something about partisanship were far more likely to say something negative about Trump (68 percent) than they were about Biden (7 percent).

Republicans were more than twice as likely as Democrats to bad-mouth the opposing party: 37 percent of Republicans said something bad about Democrats or socialism in their responses, while 17 percent of Democrats wrote a negative note about the GOP. 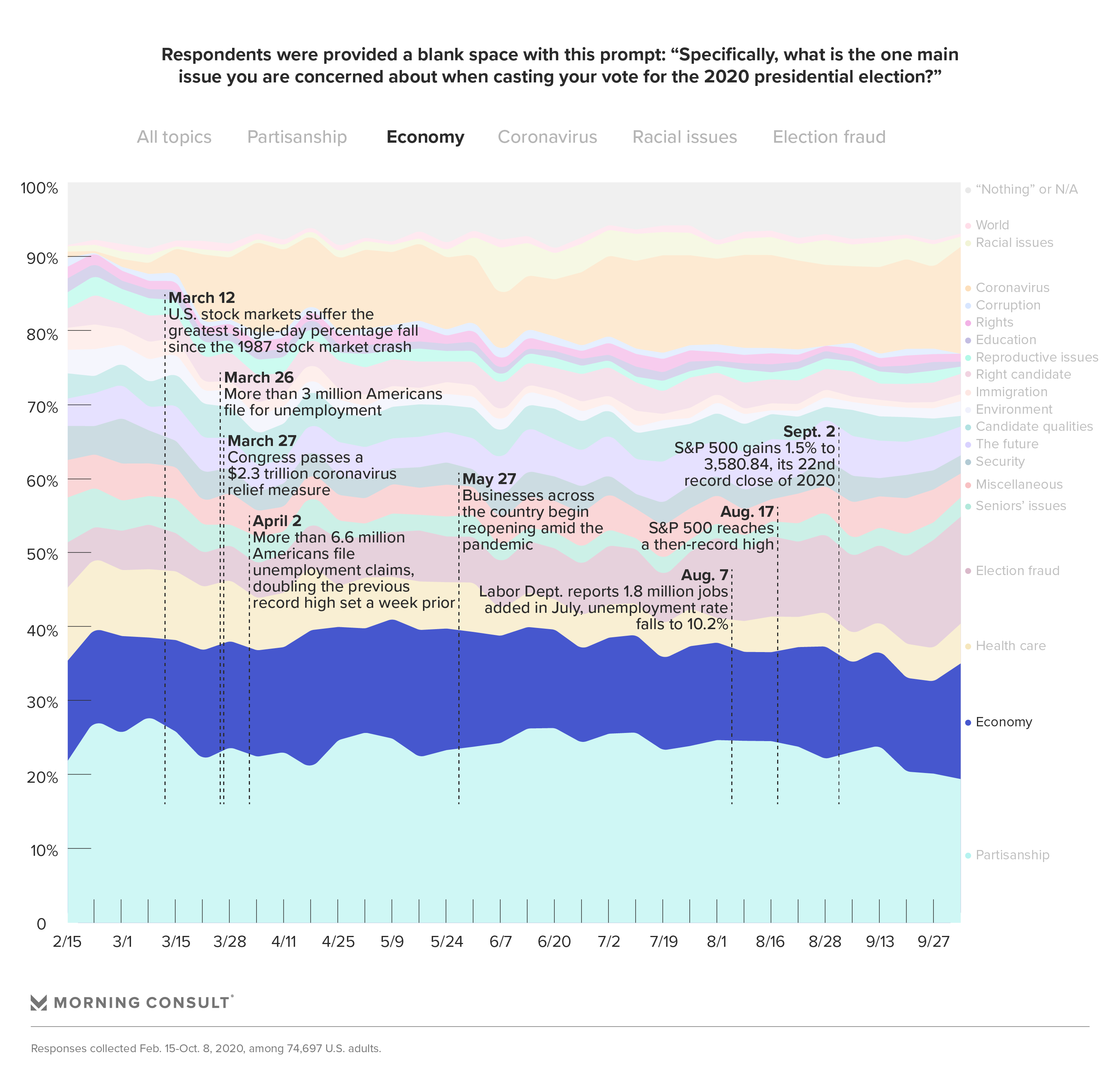 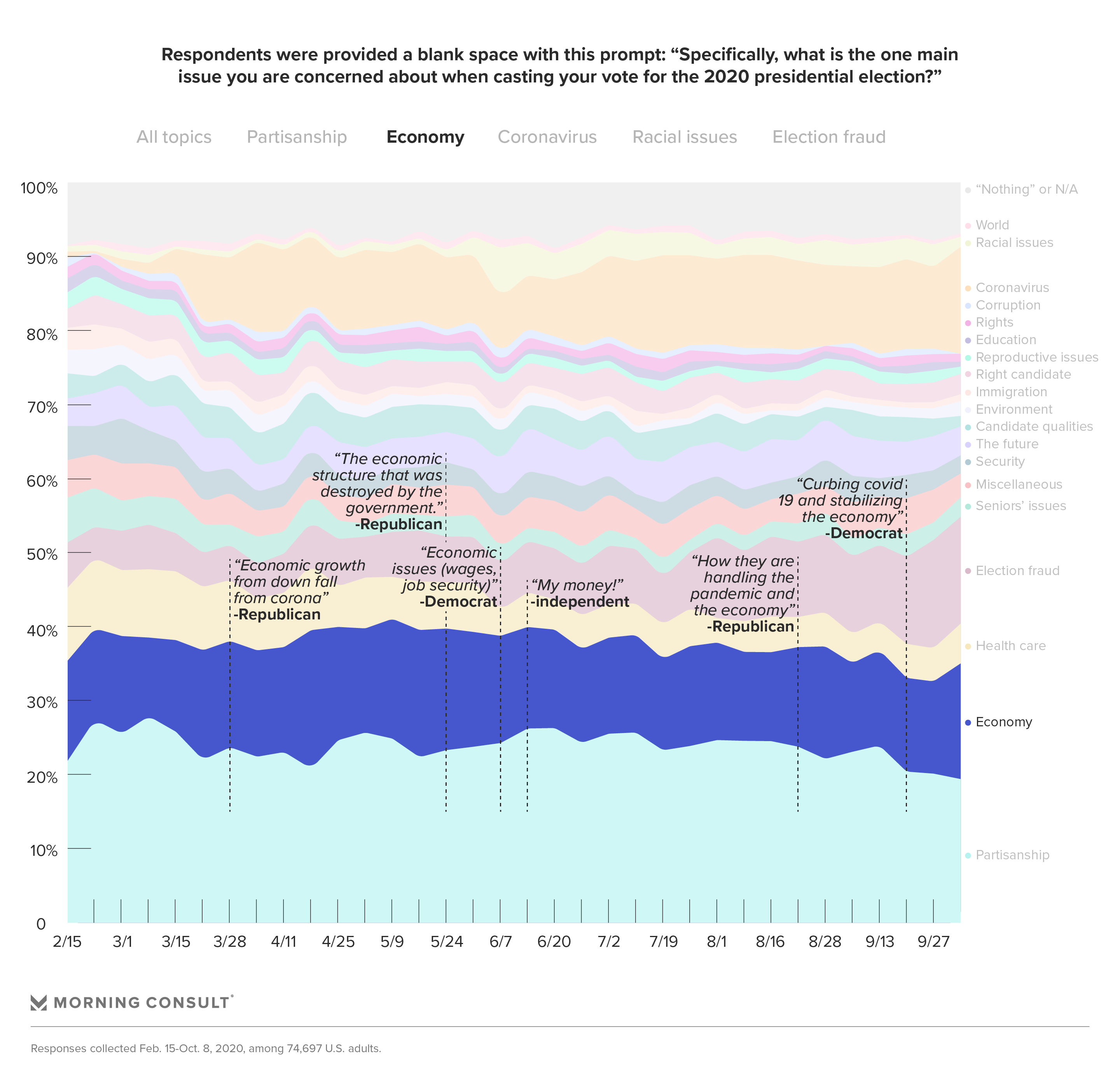 While economic concerns took a back seat to those of the partisan variety from February onward, fears about finances were still the second-most-cited issue, the open-ended analysis found, as the pandemic wreaked havoc on the U.S. economy, triggering a record number of unemployment filings.

Expressing worry about the economy was especially acute among Republicans, who were about as likely to name economic issues — such as jobs, unemployment and wages — as they were to voice “partisanship” concerns. Twenty-one percent of Republicans on average named the economy as their top concern in 2020, while 20 percent on average said something nakedly partisan. (The economy ranked second for independents for most of the year, and fourth for Democrats.) 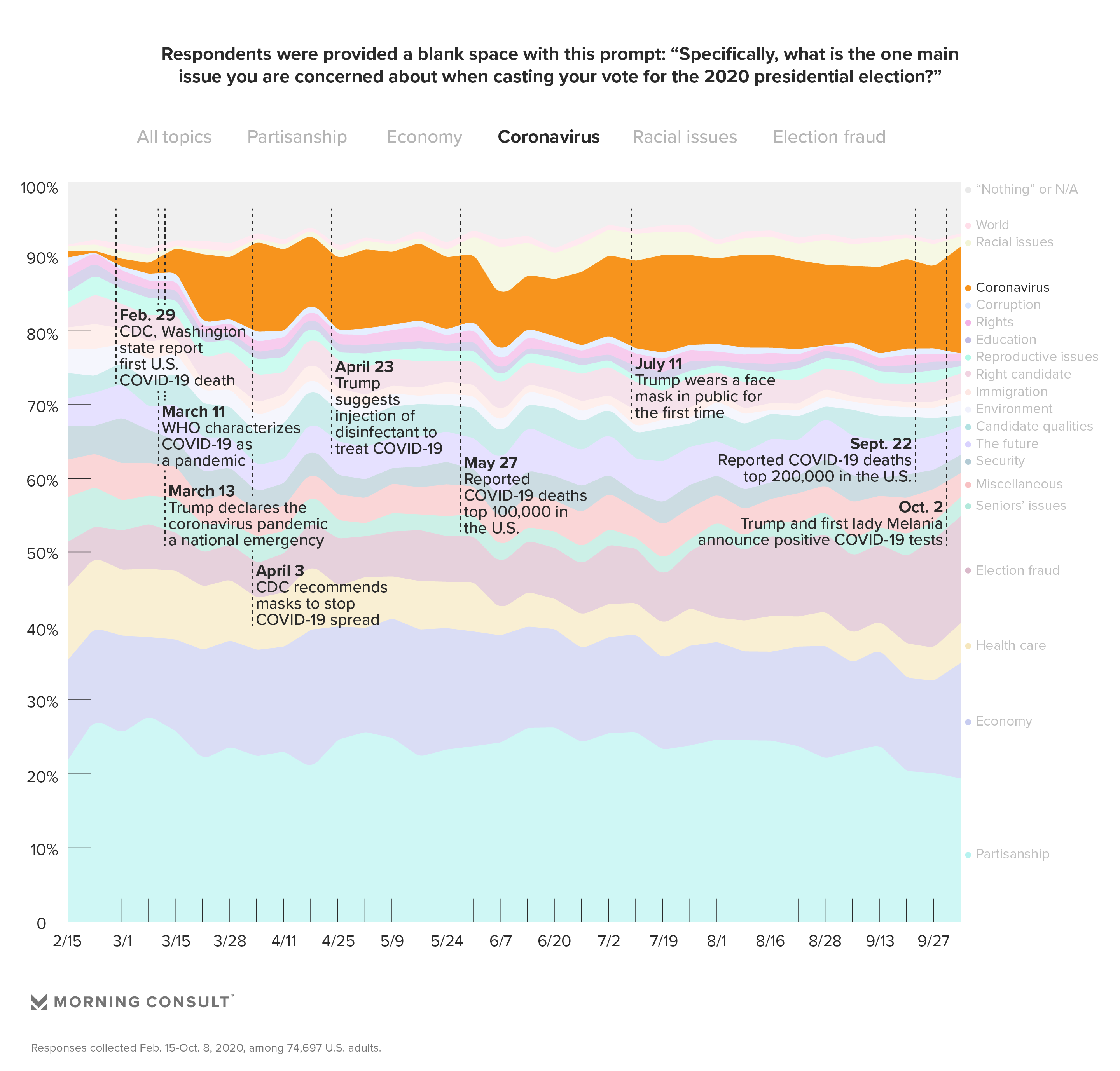 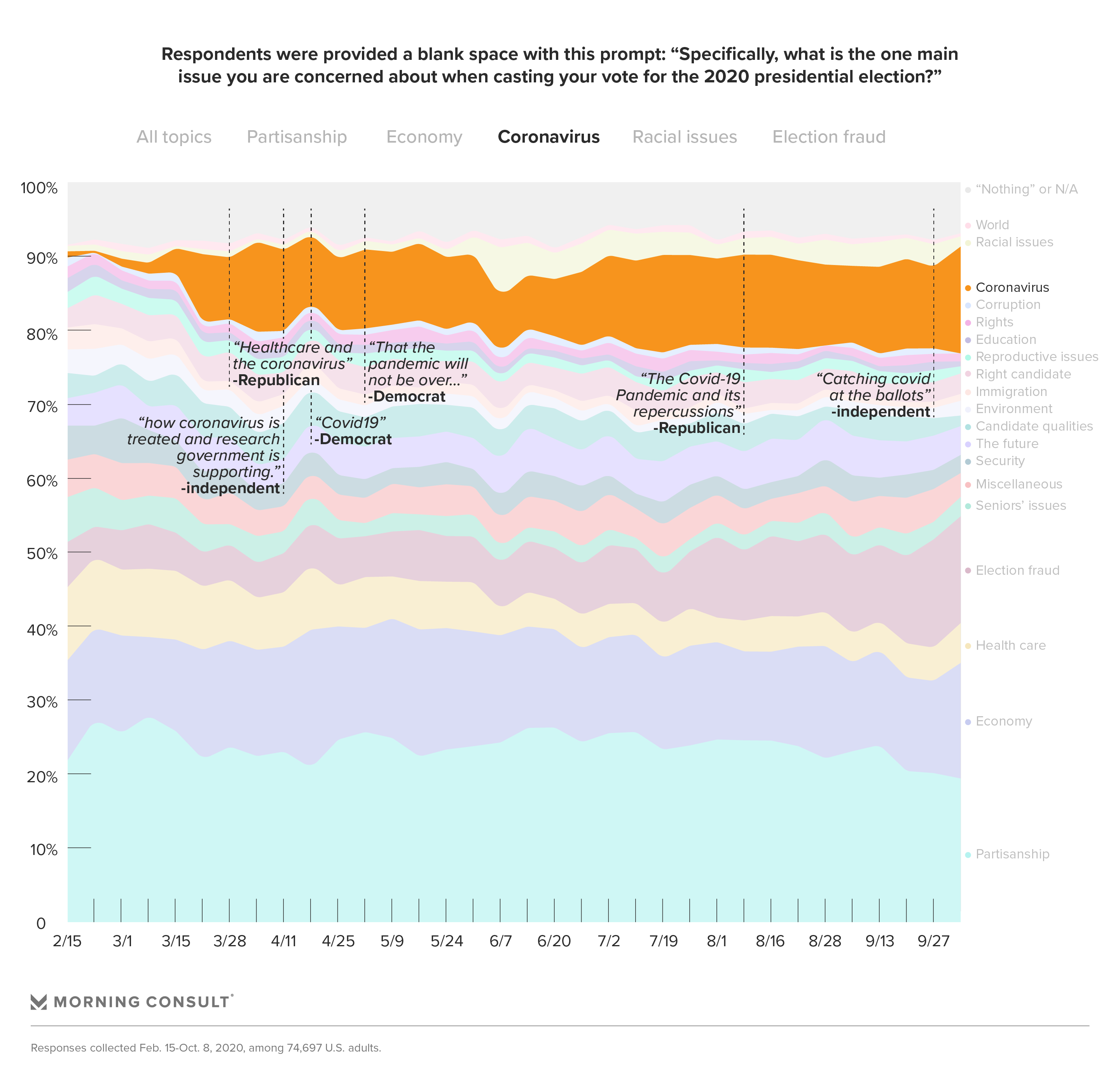 The polling also shows how the pandemic increasingly registered as a voting concern as it spread across the country, despite Trump’s downplaying of the virus’ seriousness or his insistence that it will soon disappear.

COVID-19 was barely a blip on Americans’ radar when the polling began in February, but as of early October, which saw the disease’s death toll exceed 200,000 Americans, the category made up 14 percent of responses, a high. As U.S. confirmed cases began to climb in April, respondents of every political stripe experienced a roughly similar uptick in concern about COVID-19.

Republicans’ concern over coronavirus spiked in April, but as some Republican leaders lobbied to reopen businesses despite the health risks while many Democratic governors imposed stay-at-home mandates regardless of the harm to the economy, the share of Republicans who named the virus as a concern dropped before peaking again in mid- to late July as a second surge of confirmed cases hit the country. Meanwhile, the number of Democrats and independents who have expressed concern about the pandemic continues to rise. 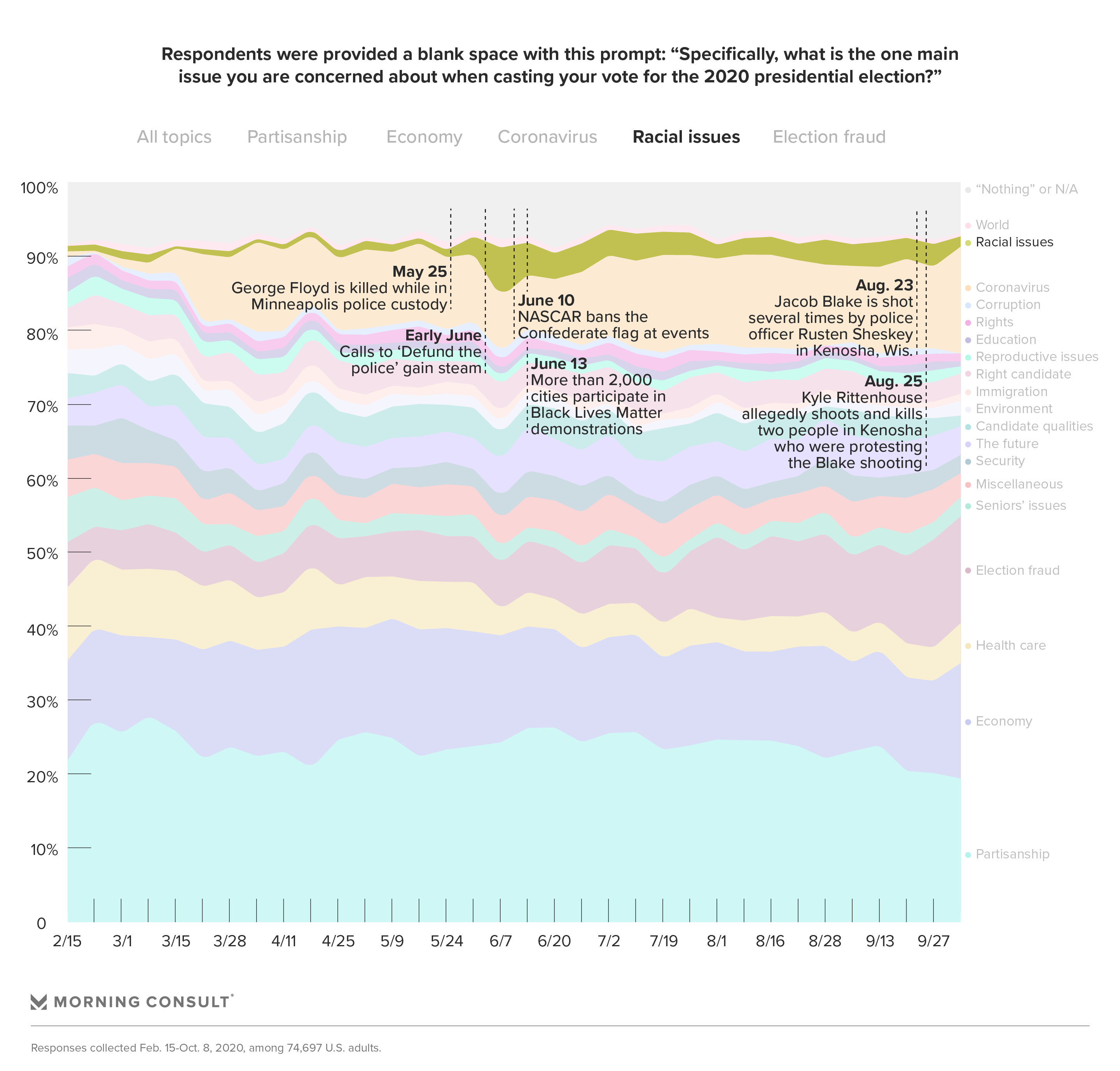 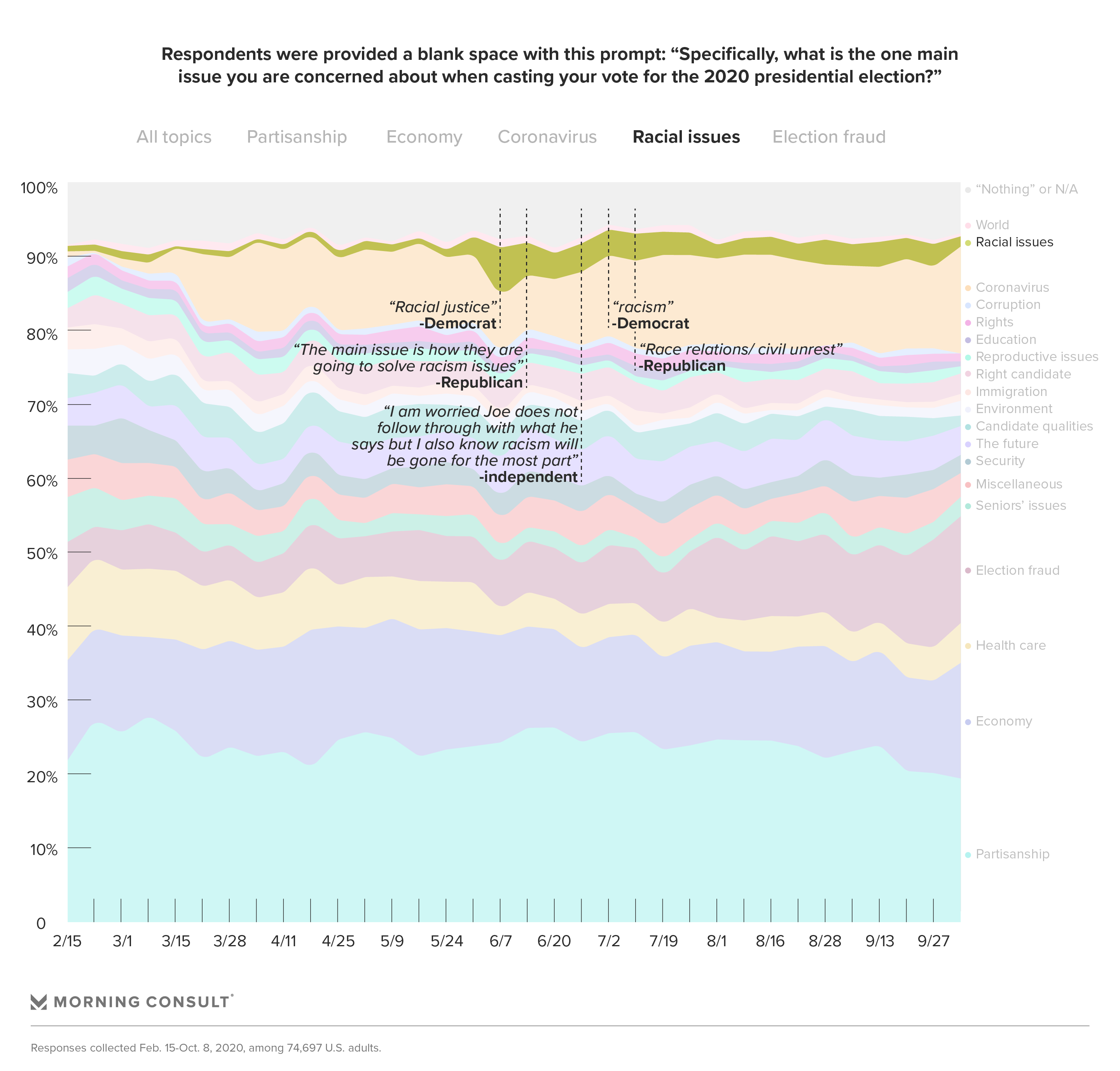 This year was also defined by the resurgent Black Lives Matter movement that followed the Minneapolis police killing of George Floyd on May 25. In early June, as protests of the killing unfolded across the country, respondents — especially Democrats — began to start citing racial issues as their top concern.

But as time and headlines shifted, so did the public’s attention. Concerns about the pandemic and integrity of the election quickly replaced those of institutional racism. (Open-ended responses Morning Consult collected around the time of the Black Lives Matter resurgence shows Americans were outraged by Floyd’s death, but concern stopped there.)

The latest poll shows that 1 percent of survey respondents named something categorized as a  racial issue, compared to its high of 7 percent in June. 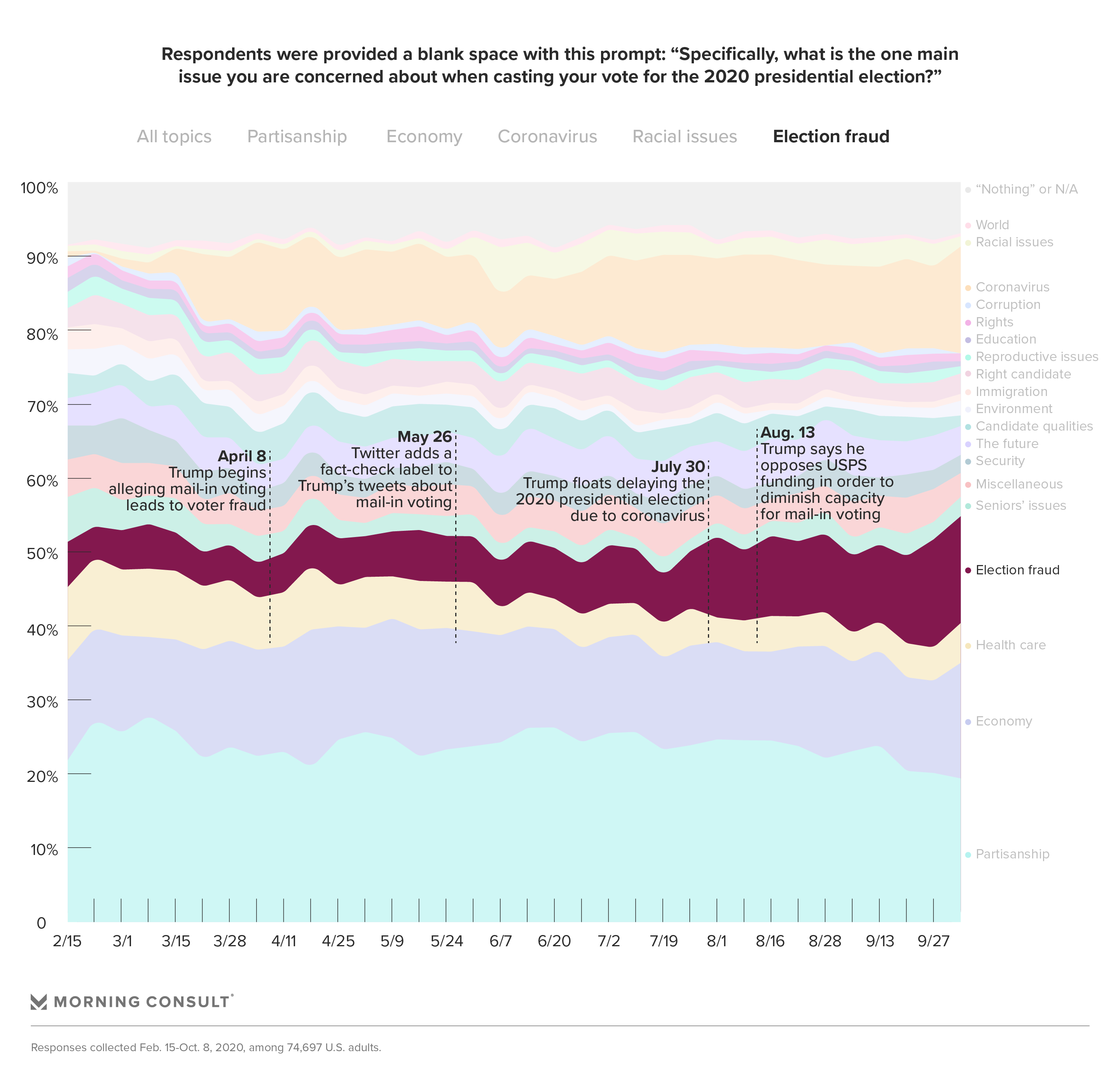 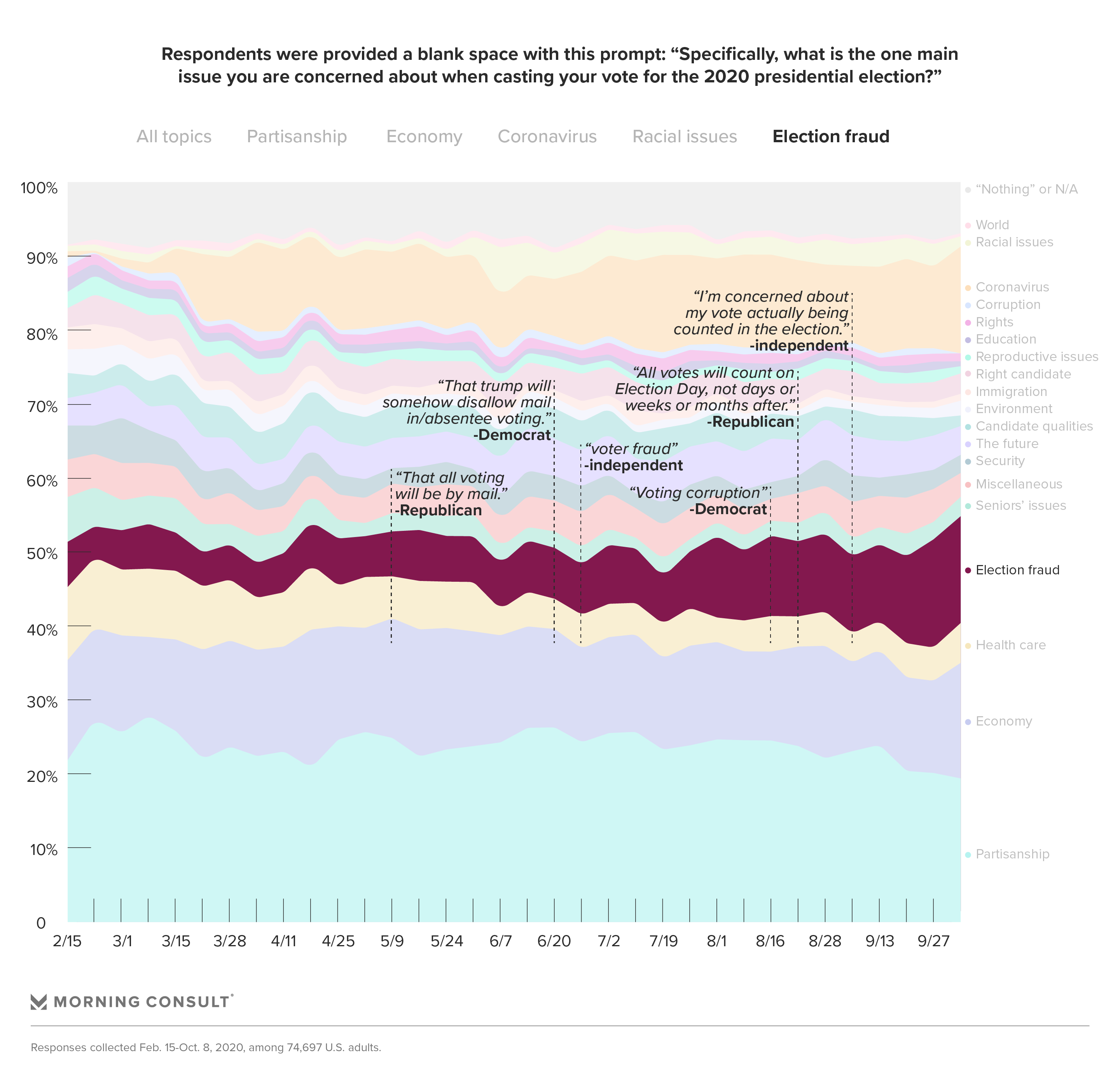 The fracturing of the country along partisan lines has also contributed to an imperiling of trust in the country’s most basic democratic processes, with 40 percent of voters saying in a Morning Consult/Politico poll earlier this month that the 2016 election was neither freely nor fairly decided, compared with 10 percent who said the same of the 2012 and 2008 elections.

Open-ended responses gathered in 2020 indicate an increase in alarm over the accuracy and legitimacy of this year’s election, driven chiefly by pandemic-inspired uncertainty on voting methods, Trump’s own rhetoric and concerns about presidential abuse of power for personal political gain.

On the rhetorical front, the president has repeatedly raised without evidence allegations that mail-in voting will lead to widespread voter fraud as states began taking steps to provide voters with alternatives to in-person voting amid the pandemic. By late July — when Morning Consult’s open-ended responses reflected the public’s increasing concerns over election fraud or accuracy — reports about a dramatic slowdown in mail delivery at the U.S. Postal Service led to widespread alarm that mailed-in ballots would not reach election officials in time.

Like economic issues, concerns of this nature were not confined to one side of the aisle: On average, 9 percent of Republicans every week said something about the logistics of the election, along with 7 percent of both independents and Democrats.

Methodology: The analysis in this article leverages custom Natural Language Processing (NLP) tools that Morning Consult data scientists built to analyze, visualize and distill meaning from open-ended survey responses. The approach leverages machine learning models that “understand” the semantic and syntactic meaning of words, are aware of grammatical structures in sentences, and are mindful of most misspellings. The tool’s design includes a “human-in-the-loop” element that allows Morning Consult journalists and data scientists to combine their domain expertise with recommendations from NLP models. When the analysis is complete, the tool maps survey respondents to a number of response categories, which compose the basis for the analysis in this article.

Finance Health Washington
Do NOT follow this link or you will be banned from the site!