Net perception of commissioner’s handling of the pandemic increased fourfold

Commissioner of Baseball Rob Manfred attends Game Two of the National League Division Series between the San Diego Padres and the Los Angeles Dodgers at Globe Life Field on October 07, 2020 in Arlington, Texas. In a Morning Consult poll earlier this month, 45 percent of self-identified sports fans said Manfred has done a good job handling the pandemic and adapting plans for the 2020 MLB season, while 17 percent of fans were critical of his performance. (Ronald Martinez/Getty Images)
By Alex Silverman

MLB Commissioner Rob Manfred appeared visibly shaken by the chorus of boos he heard while presenting the Los Angeles Dodgers with their World Series championship trophy Tuesday night at Globe Life Field in Arlington, Texas. But while it’s been a difficult year for Manfred, from the Astros scandal to brutal labor negotiations, new data shows sports fans largely approve of how he has handled league business amid the coronavirus pandemic. 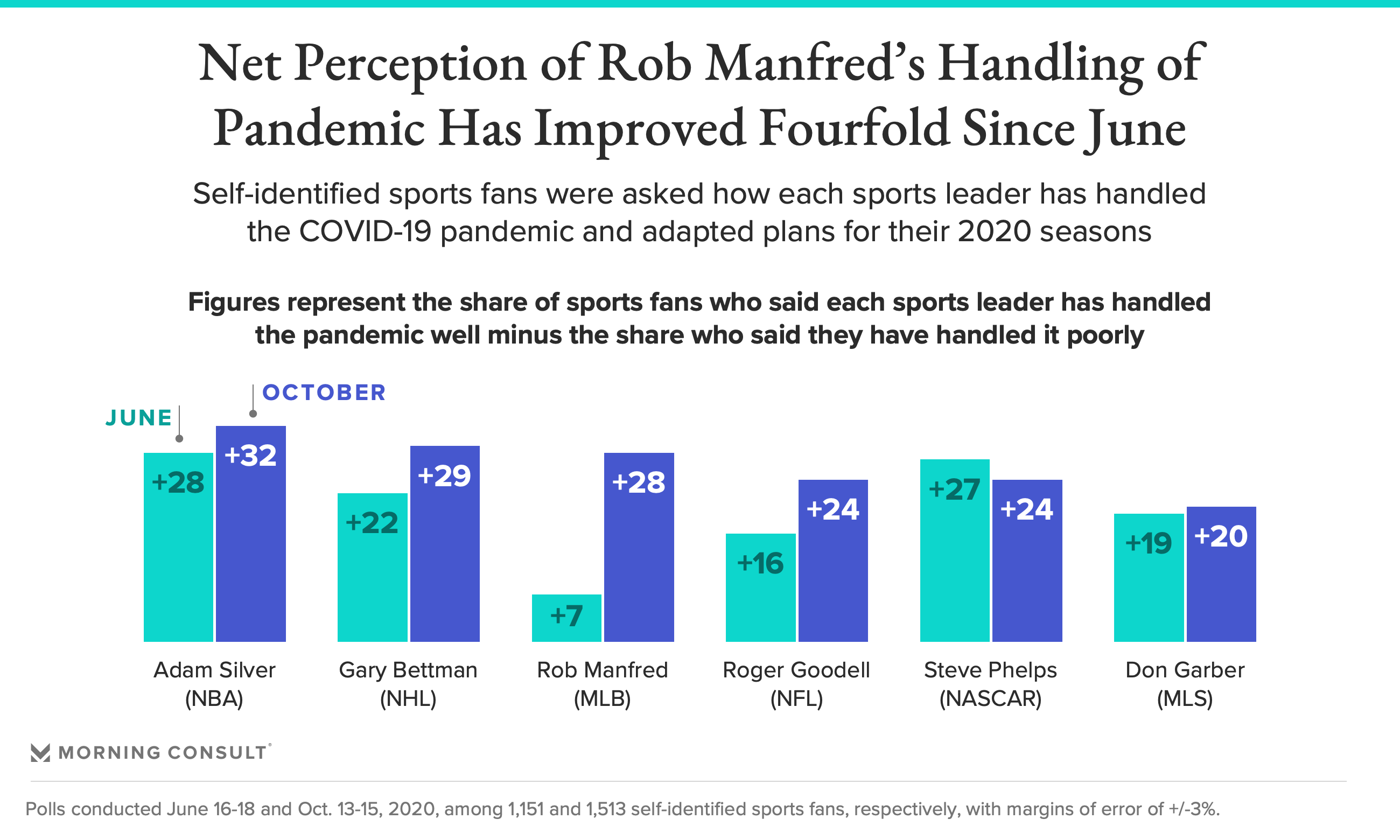 In a Morning Consult poll earlier this month, 45 percent of self-identified sports fans said Manfred has done a good job handling the pandemic and adapting plans for the 2020 MLB season, while 17 percent of fans were critical of his performance. That puts the net sentiment toward Manfred’s performance — the share of respondents with a positive opinion minus the share with a negative opinion — at 28 percentage points.

Net sentiment toward Manfred’s handling of the pandemic increased fourfold since June, when 30 percent of fans said he was doing well and 23 percent said he was doing poorly. At that time, MLB and its players’ union were in the throes of a contentious boardroom battle over how players would be compensated for playing a reduced number of games without fans in attendance. MLB fans were more likely to blame Manfred and the MLB owners for the impasse than to say the players were at fault.

The shortened MLB season got off to a chaotic start with the Miami Marlins experiencing a coronavirus outbreak within the first few days, but the league ultimately managed to finish its regular season on Sept. 27 as slated with all teams completing their 60-game schedules. The expanded 16-team postseason went off without a hitch up until the final night of the World Series, when Dodgers third baseman Justin Turner became the first player to test positive.

While Manfred ranked last among the six major U.S. sports leaders included in the June survey in net sentiment, he moved up to third earlier this month, behind only NBA Commissioner Adam Silver (32 points) and NHL Commissioner Gary Bettman (29 points). NFL Commissioner Roger Goodell (24 points) saw net views of his COVID-19 handling jump by 8 points in the recent survey, moving from fifth place to a fourth-place tie with NASCAR President Steve Phelps. MLS Commissioner Don Garber fell from fourth to sixth despite a 1-point increase in his score.

Manfred has held the top job in baseball since taking over for Bud Selig in 2015 and received a five-year contract extension in 2018 through the 2024 season. A TMZ report earlier this year said his annual salary was rumored to be around $11 million before he agreed to take a 35 percent pay cut amid the pandemic.

Those who identified as avid sports fans picked Bettman as their top performer among the six leaders, with Silver and Manfred tied for second.