Throughout the Trump Years, Renewables Sector Has Employed Nearly Three Times as Many People as Fossil Fuels Industry

Pandemic has led to lost jobs in both sectors, but clean energy is faring worse

Over the course of this election season, energy in the United States has been debated through the lens of jobs, both lost and gained. President Donald Trump frequently mentions the hydraulic fracturing industry in swing states like Pennsylvania and the jobs that could be lost if his challenger institutes a fracking ban (which Democratic nominee Joe Biden has unequivocally stated he has no plans to do).

Meanwhile, perhaps in response to the myth that climate action means a net loss for jobs, Biden’s own energy and climate plan is couched in the language of job growth in renewables and other sectors.

But data collected by BW Research Partnership Inc. and shared exclusively with Morning Consult indicates that Trump’s picture of robust oil and gas employment threatened by the Democrats’ insistence on transitioning to renewables is not consistent with actual job figures. Since the president took office, the renewables sector has employed nearly three times as many people as the fossil fuels sector; in 2019, they had 3.36 million and 1.19 million workers, respectively.

And between 2016 and 2019, the renewables sector added more than double the jobs that fossil fuels did, increasing its total workforce by roughly 207,000 people, mostly in energy efficiency. In contrast, the fossil fuels sector added some 98,000 jobs. 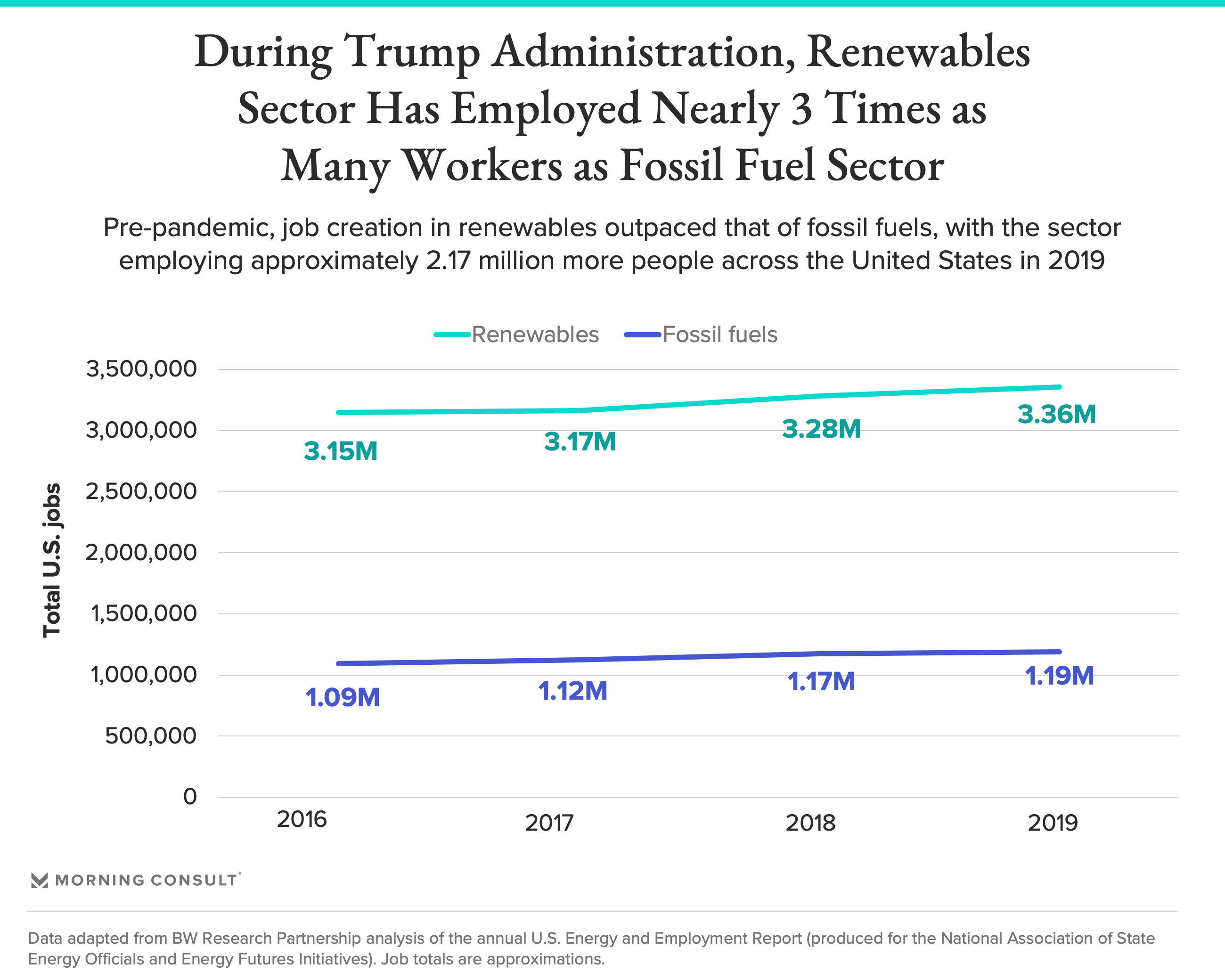 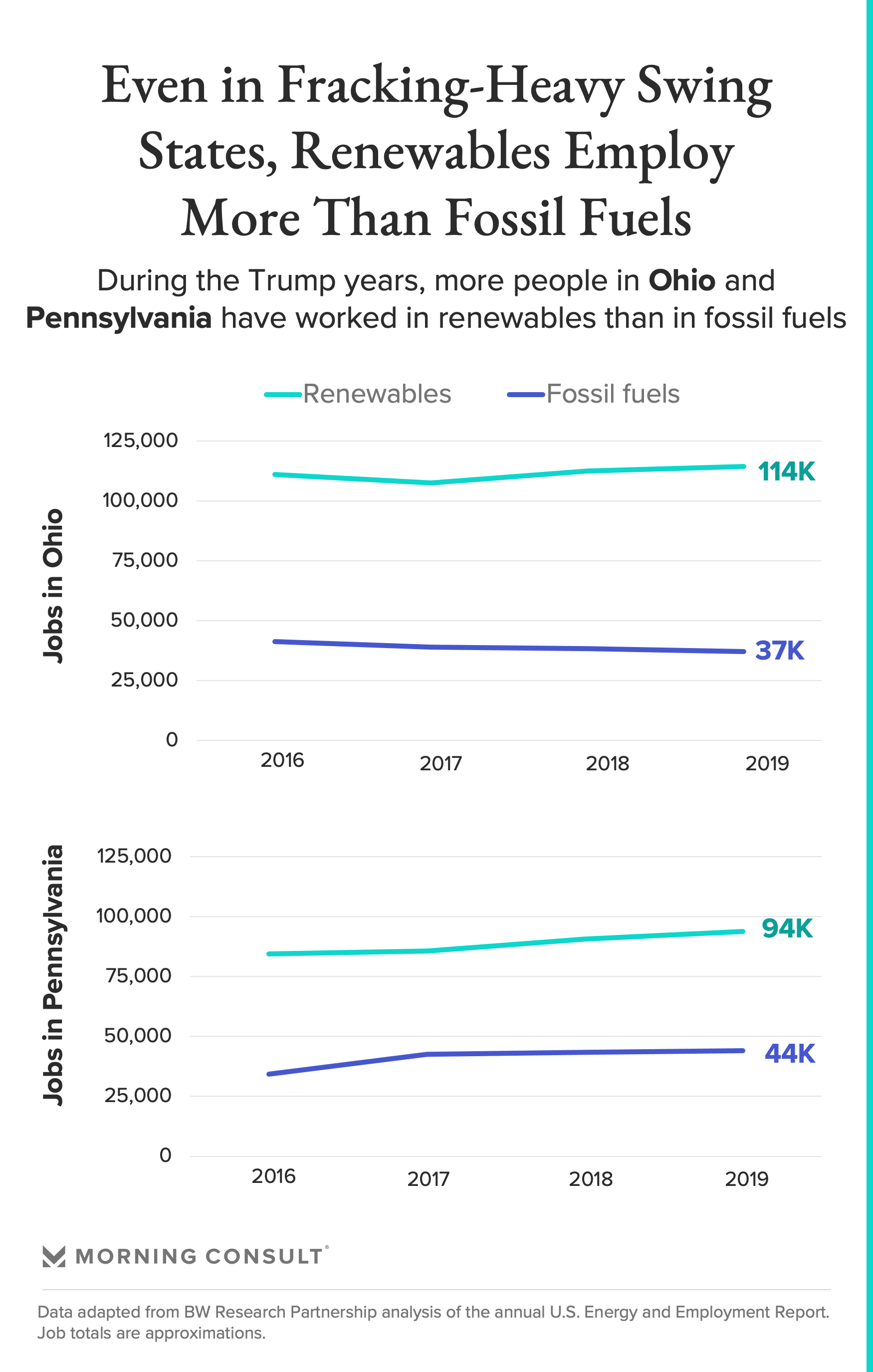 Even in states where Trump routinely touts fracking as a crucial part of the economy, the renewables sector is a much larger employer. In Ohio, renewables employed roughly 114,000 people to fossil fuels’ 37,000 by the end of last year. And in Pennsylvania — which has seen heavy attention from both candidates in the last days of the race, especially in its gas-producing western region — renewables employment outpaced that of fossil fuels by some 50,000 jobs: 94,000 to 44,000.

Texas, however, is an example of a state where oil and gas still reign. The Lone Star State has long been both a Republican stronghold and the headquarters of the U.S. oil industry, and fossil fuels employment still edges out renewables by more than 100,000 jobs (roughly 349,000 to 241,000). But this year, things are beginning to change in both respects.

As of Oct. 22, Morning Consult polling finds that Texas’ presidential race is within the margin of error, and on Friday, the state surpassed its total 2016 vote count with four days left until Election Day. Texas is also seeing steady growth in renewables; its clean energy sector is second only to California’s in terms of how many people it employs.

As of the end of 2019, there were just seven other states where fossil fuels employment still bested that of renewables, including Alaska (by around 9,000 jobs), Louisiana (by around 48,000 jobs), Oklahoma (by around 47,000 jobs) and Wyoming (by around 14,000 jobs). Aside from Texas, all of these states are projected to be easy wins for Trump on Election Day. 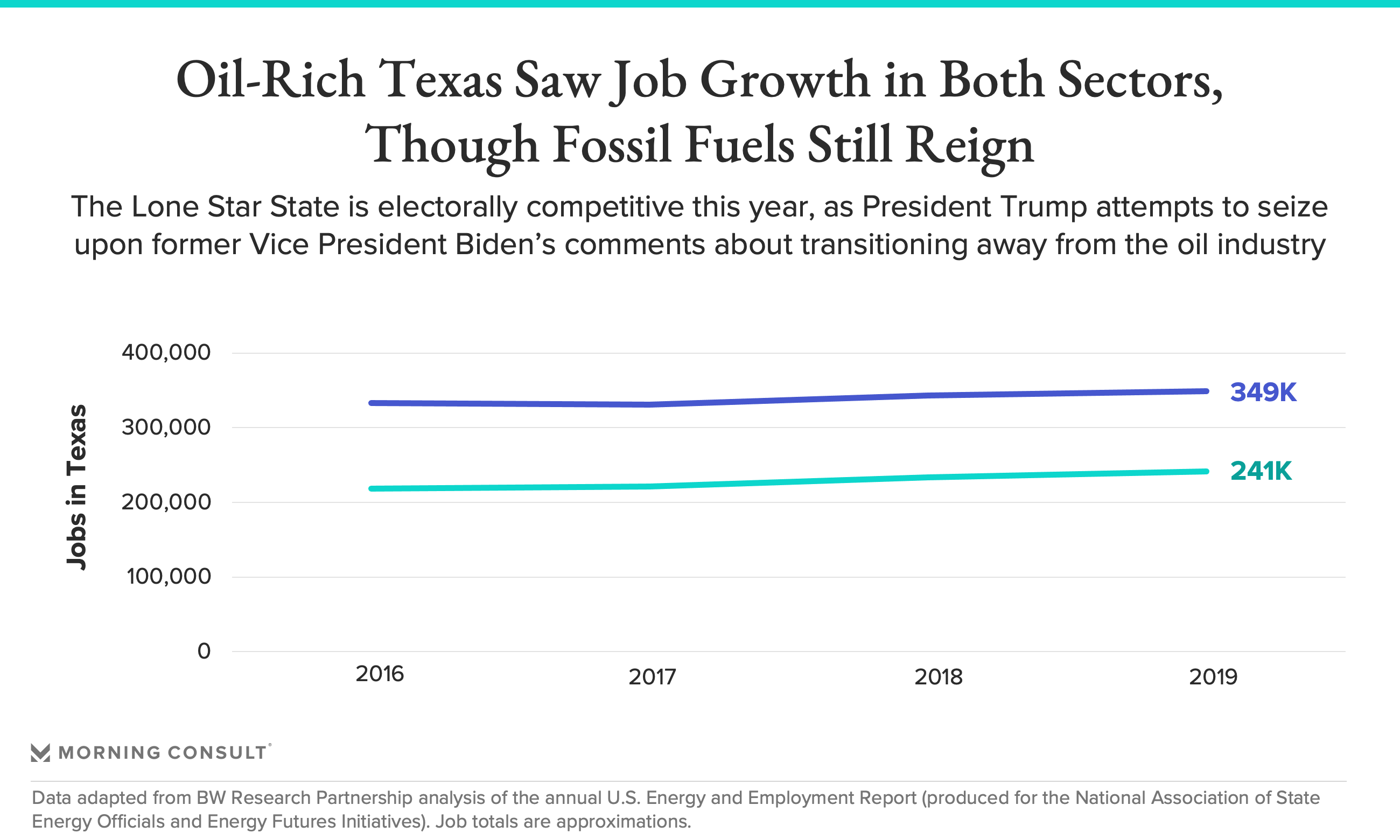 Of course, this 2016-19 dynamic of steady growth in both renewables and fossil fuels was complicated by the arrival of the coronavirus. Both the renewables sector and the fossil fuels sector have suffered as a consequence, though according to the latest data, the former faces a larger deficit.

While the renewables workforce was expected to grow by 5.3 percent in 2020, BW Research found that amid the pandemic, it has instead shrunk by 13.8 percent, leaving 477,862 workers out of a job as of September.

Deloitte Insights, meanwhile, compiled a similar assessment of job losses for the oil, gas and chemicals industry, finding that about 107,000 workers were laid off between March and August of 2020. (The two analyses were conducted using different methodologies, making it an imperfect comparison of the sectors; however, these job losses would imply an approximately 9 percent drop since the BW Research employment numbers for the end of 2019.)

“Such large-scale layoffs, coupled with the heightening cyclicality in employment, are challenging the industry’s reputation as a reliable employer,” the Deloitte report’s authors wrote in early October.

In contrast, most projections see the renewables sector expanding in the coming decades as the United States and world more broadly moves to decarbonize, even given the pandemic-related setbacks. While things remain precarious, experts say the sector has the potential for a major bounceback, especially if Biden is elected and enacts his proposed clean energy investments.

Meanwhile, low oil prices and industry instability has precipitated a series of mergers and acquisitions as the fossil fuels sector attempts to weather the pandemic and associated chaos. And as renewables grow increasingly competitive and attractive to consumers, it is unclear if a similar renaissance is in the cards for the oil and gas sector.