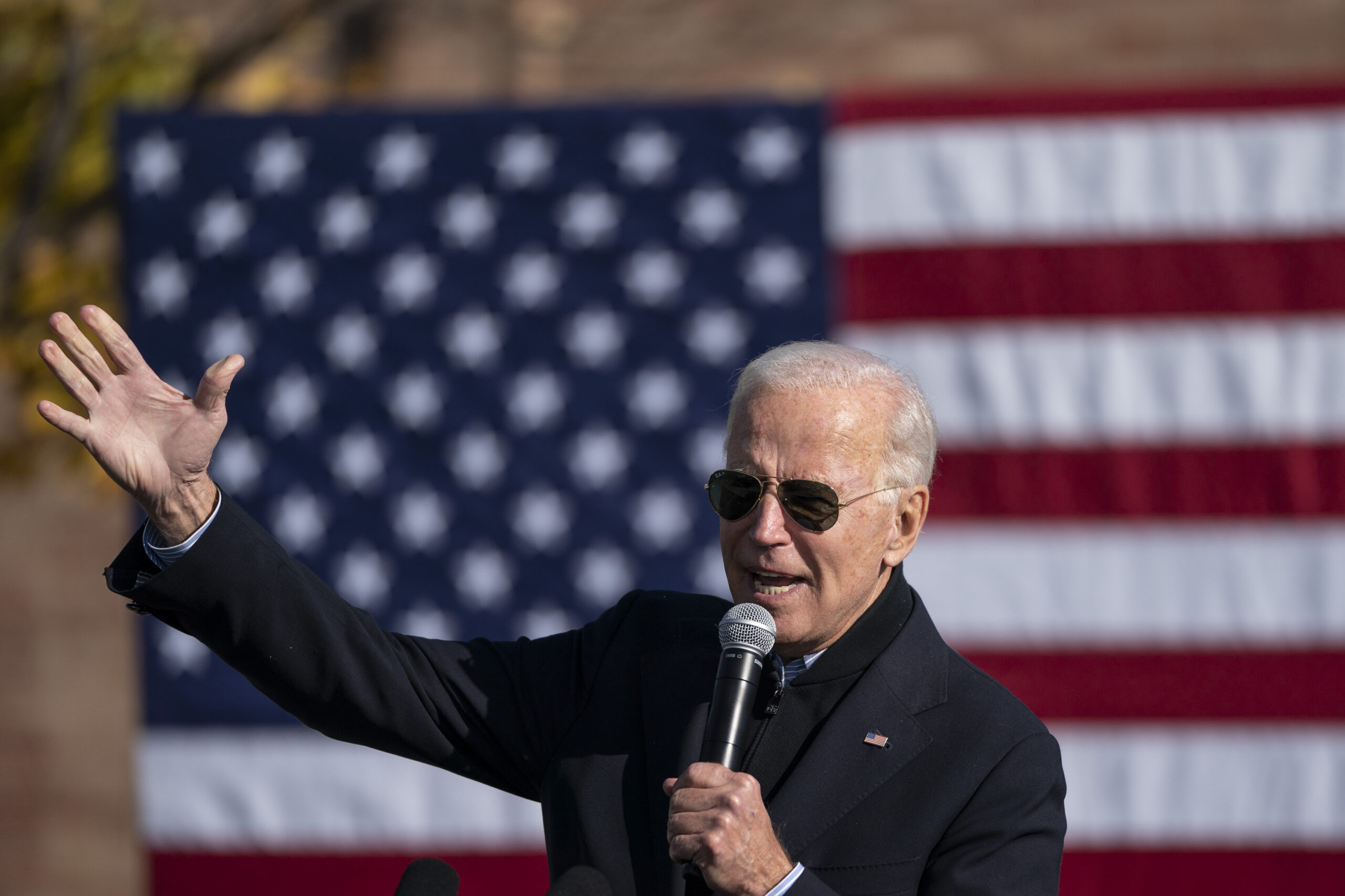 With less than 48 hours until the polls open on Election Day, Democratic presidential nominee Joe Biden looks set to overperform his party’s 2016 margins at the top of the ticket, raising doubts about President Donald Trump’s chances of securing a second term in office.

In Morning Consult’s final national poll of the 2020 presidential campaign, the former vice president leads the Republican incumbent 52 percent to 44 percent, among 14,633 likely voters nationwide. That compares favorably with Democratic nominee Hillary Clinton’s standing against Trump four years ago, when she led by 3 percentage points in the last Morning Consult poll of the cycle, finished 2.1 points ahead nationally and lost the Electoral College by 77 votes.

If the United States elected presidents via national popular vote, Clinton would have won — but it doesn’t, and just like in 2016, Trump retains an Electoral College advantage relative to his standing nationwide.

That advantage has limits, however: A September projection from Nate Silver of FiveThirtyEight estimated that a 4- to 5-point popular vote victory gives Biden an 89 percent chance of the presidency, an estimate that ticked up to 99 percent with a 6- to 7-point margin. Biden’s latest margin of 8 points, which tracks with FiveThirtyEight’s average of presidential polling, leaves the president in an exceptionally perilous place going into Election Day.

Four years after Democrats found themselves locked out of Washington’s levers of government, a comparison of 2016 exit data and the latest polling shows their improved fortunes are largely down to Biden’s appeal among older and white voters, many of whom were repelled by Clinton. 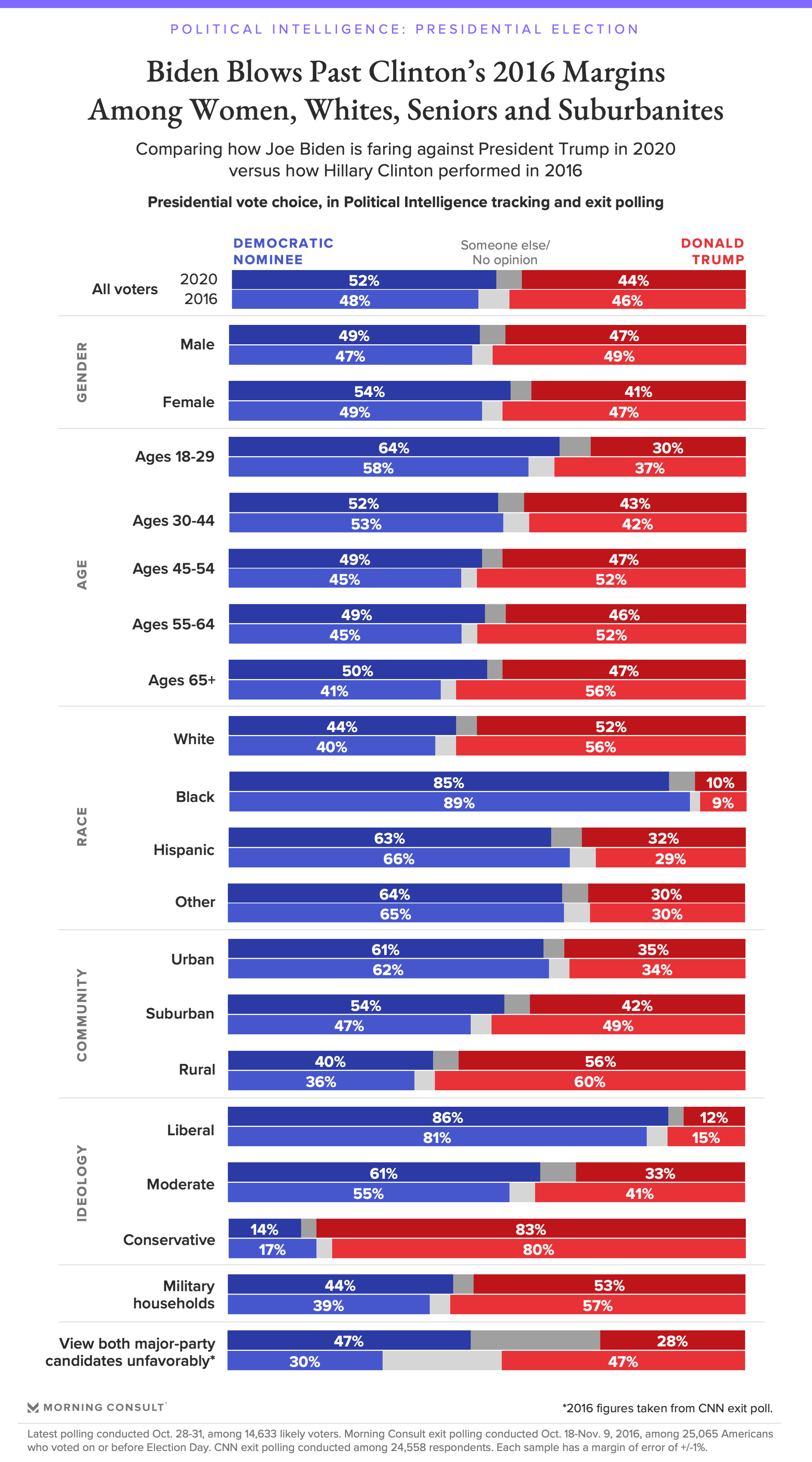 While whites backed Trump over Clinton by a 16-point margin (56 percent to 40 percent) four years ago, Biden trails the president by only 8 points (44 percent to 52 percent) with the group, an improvement that has helped the challenger compensate for his relative weakness among voters of color.

Older voters’ desertion of Trump has been even more stark: Though 56 percent of Americans ages 65 or older backed the president in his first presidential campaign, 47 percent say they will do so again this year, and more (50 percent) say they’re voting for Biden.

That’s not to say that it’s exclusively older voters who are giving Biden better margins this time around. The 77-year-old statesman’s lack of clout with younger voters during the Democratic primary does not appear to have carried over to the general race. Trump trails Biden by 34 points among those ages 18-29, while he trailed Clinton by 21 points with that group.

Women, the largest voting bloc in America, are also set to once again play a decisive role in determining the country’s commander in chief. After narrowly backing America’s first female presidential candidate over Trump by 2 points in 2016, per Morning Consult’s exits, women favor Biden by a 13-point margin now.

The country’s suburbs have increasingly been a source of strength for Democrats during the Trump presidency, fueling their House takeover in the midterm congressional elections two years ago. Biden’s margins continue that trend as well, with Trump staring down a 12-point deficit after narrowly besting Clinton in the last presidential contest.

Many of these voters tend to be women and also to identify as moderate or independent. Biden has made additional strides with these latter two voting blocs, doubling Clinton’s 14-point edge among moderates four years ago and leading Trump — who won independents by 9 points in 2016 — among the swing group by 10.

While underperforming Clinton among urban voters, Biden does slightly better among rural voters, which is another example — along with his standing by racial and generational demographics — of a shift that may prove crucial in a number of battleground states.

And though Biden has grown increasingly popular during the general-election campaign, he can also point to an edge among voters who don’t like him or his opponent, marking another big swing for Democrats from four years ago. While Trump won this group, the so-called haters, by 17 points over Clinton, Biden has a 19-point edge heading into Election Day.