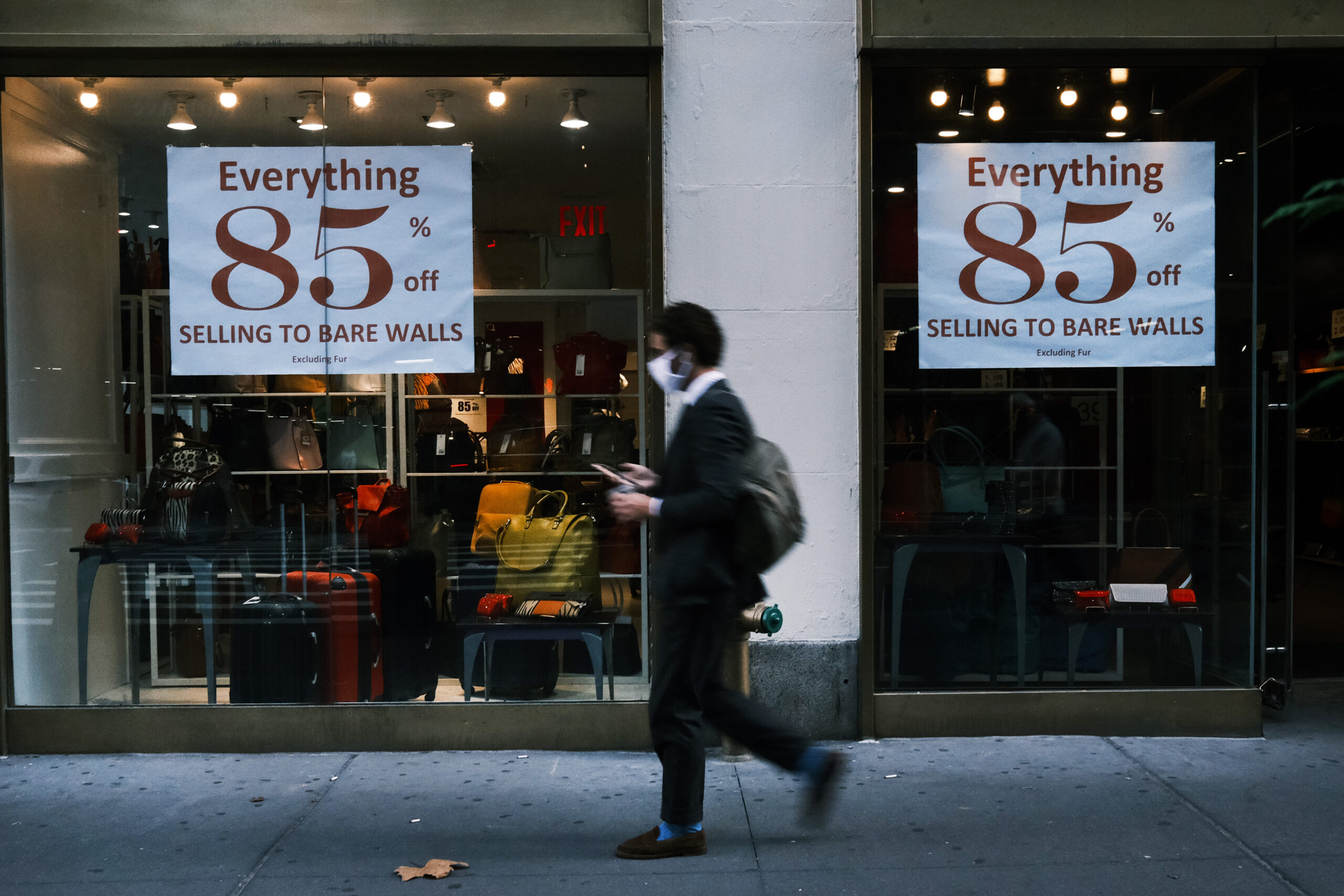 A New York City business promotes a huge sale on Oct. 15, 2020. A high share of employed workers said in October that they expect to suffer a loss of employment income in the next month, according to Morning Consult data. (Spencer Platt/Getty Images)
By John Leer

Morning Consult survey data in October shows that a persistently high share of American adults lost pay or income over the course of the month. This finding is consistent with the high volume of weekly initial unemployment insurance claims over the past five weeks. However, Morning Consult’s data provides additional insight into the distribution of pay and income losses across the income spectrum.

The share of Americans living in households with annual incomes over $100,000 who reported losing pay or income rose from 11.5 percent to 14.2 percent from Oct. 3-Oct. 31, reversing the downward trend over the prior 23 weeks. 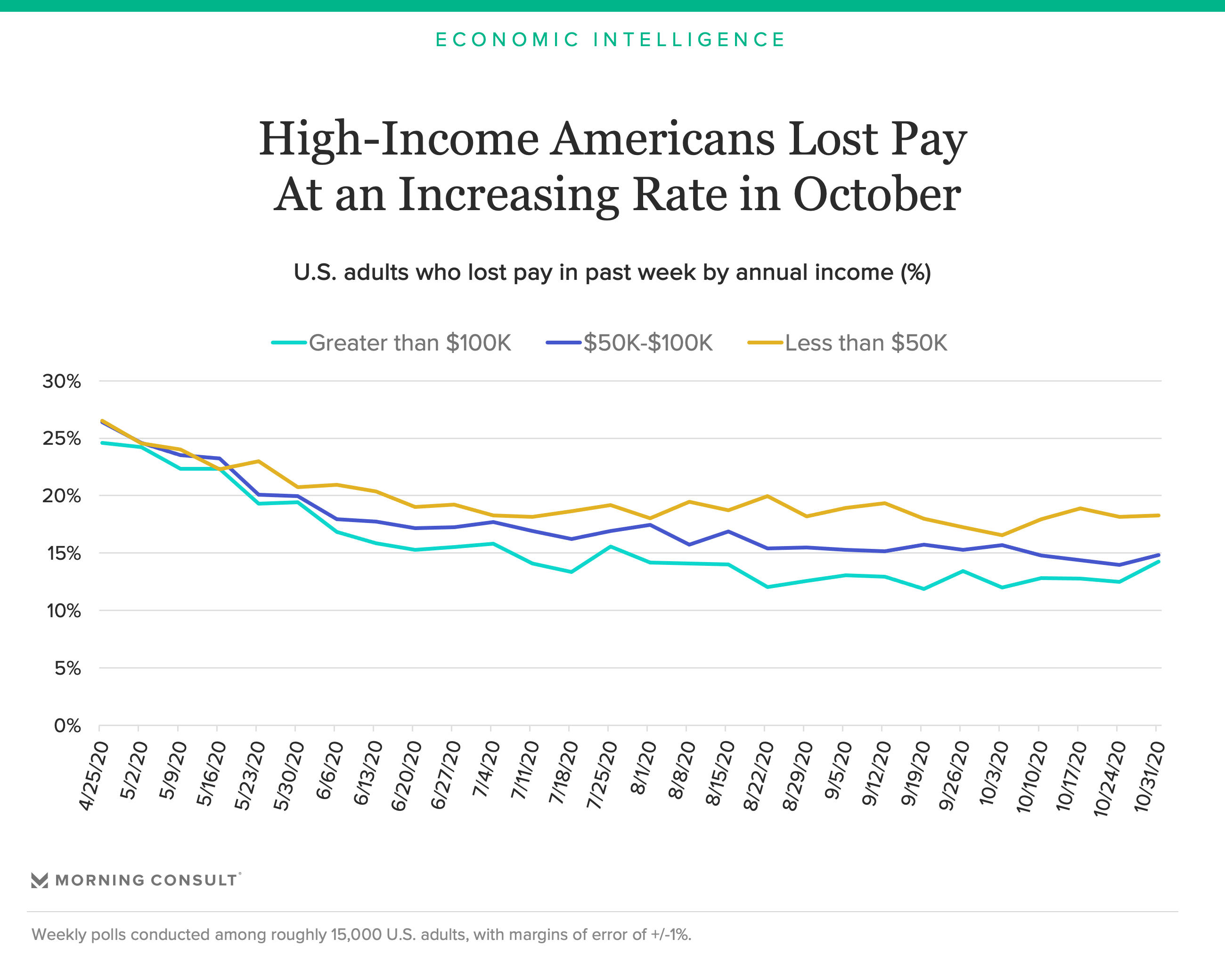 Employment outcomes remain extremely uneven across the income spectrum. Low-income Americans remain disproportionately negatively affected by the slowdown in the economy, with 18.3 percent of Americans with annual household incomes under $50,000 experiencing a loss of pay or income during the week ending Oct. 31, 4.1 percentage points higher than high-income Americans.

Prolonged and elevated income losses among lower-income Americans increases the likelihood that weaknesses in households’ balance sheets will drive delinquencies and defaults, particularly because low-income households have less in savings.

Looking ahead, the employment outlook through the remainder of the year is growing increasingly bleak. Unemployed workers have grown increasingly pessimistic about their chances of returning to work for their prior employers. As of October, 41 percent of laid-off or furloughed workers do not expect to be rehired by their prior employers, 7 percentage points higher than in September.

The increase in October marks a six-month upward trend, meaning that unemployed and furloughed workers have grown increasingly pessimistic regarding the likelihood of returning to work for their prior employers.

At the same time, a high share of employed workers expects to suffer a loss of employment income sometime within this month. The number ticked up in October from 19 percent to 20 percent. If demand for labor were strengthening, expectations of future losses of employment income would continue to fall. However, they have remained essentially unchanged since July, indicating that a sizable share of workers remain on edge. 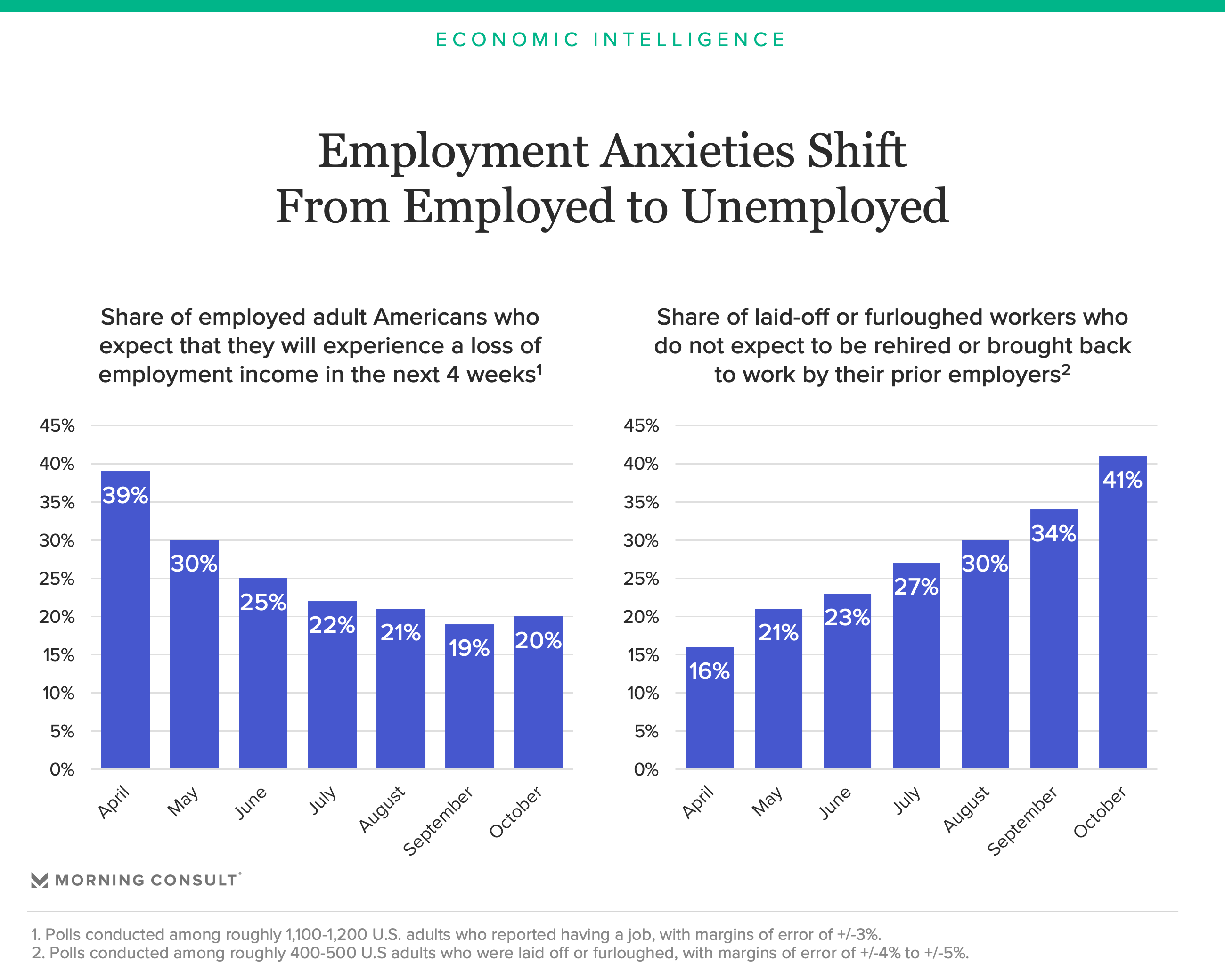 These two data sets indicate that the economic recovery is poised to further weaken through the remainder of the year. Consumer spending is likely to suffer as a growing share of high-income Americans experience a loss of income. Additionally, anxieties about job security among employed Americans are likely to drive up the savings rate, acting as an additional headwind to consumption. Finally, the less likely it becomes that unemployed Americans return to work for their prior employers, the harder it becomes for them to find employment, increasing the likelihood of long-term unemployment scarring.

The findings in this analysis are based on two separate data sets proprietary to Morning Consult. The first is a weekly online employment survey asking Americans if they experienced a loss of pay or income in the past seven days. Weekly survey responses run from the week ending April 25 to Oct. 31, and weekly sample size ranges from 28,000 to 13,000 adult respondents per week. Responses were weighted to match age, gender, educational attainment and region. The margins of error are 1 percentage point.

The second data set consists of seven separate monthly Morning Consult surveys using similar questions to produce monthly trends. The first survey was conducted April 28-29, the second May 19-21, the third June 16-18, the fourth July 23-25, the fifth Aug. 21-22, the sixth Sept. 24-26, and the seventh Oct. 21-22. All seven surveys relied on a representative sample of 2,200 U.S. adults, weighted to match age, gender, educational attainment and region. Each of the surveys’ margins of error is 2 percentage points.