Trump Stuck to His 2016 Playbook. Ultimately, It Did Not Work

2020 hurtled from one crisis to another, with Joe Biden’s polling lead widening during the summer 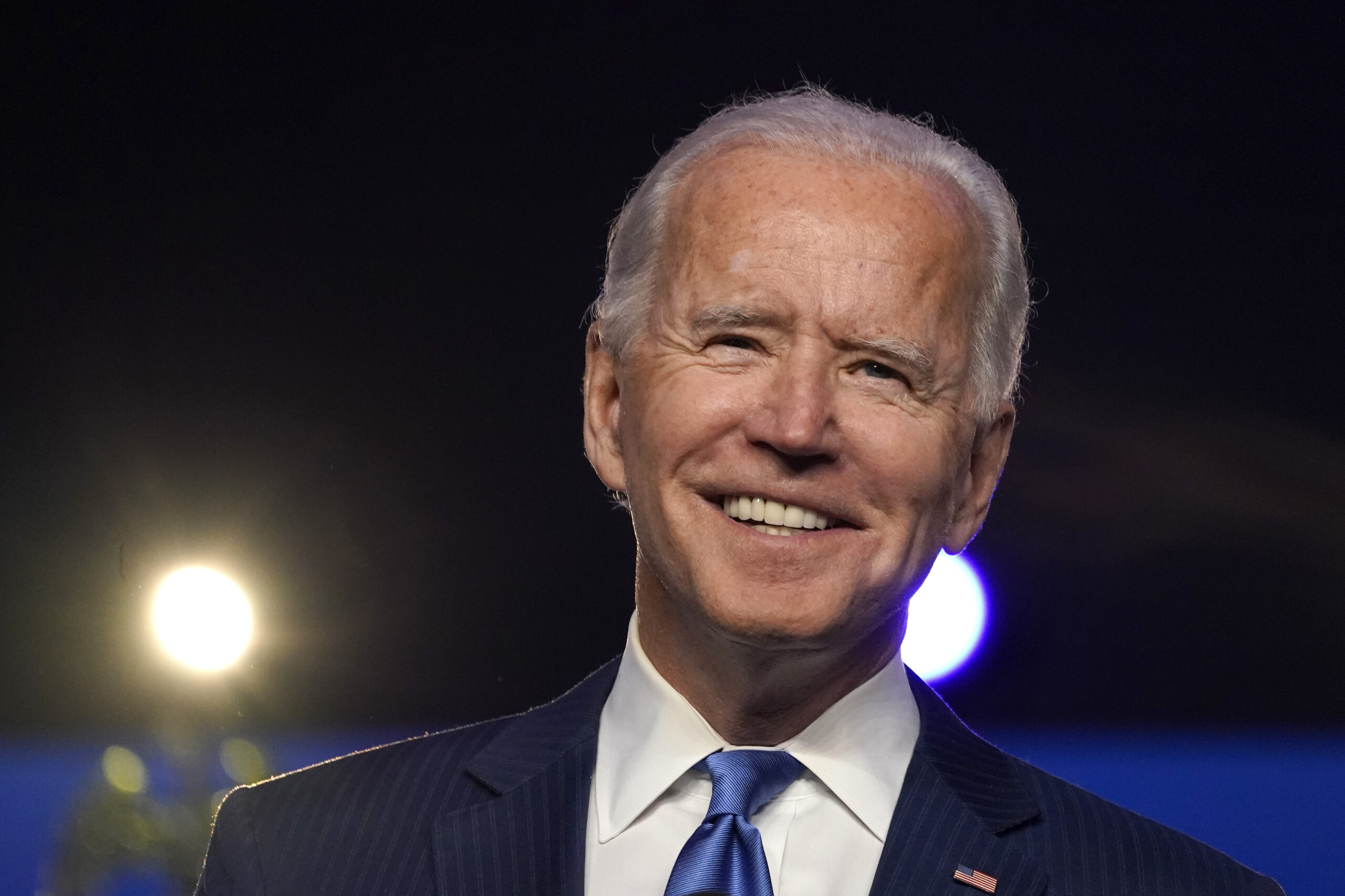 President-elect Joe Biden addresses the nation at the Chase Center on Friday in Wilmington, Del., one night before the race was called by media outlets. While Morning Consult polling showed a remarkably stable race throughout 2020, the tipping-point moment of the campaign may have come in the summer, when the Democratic nominee's lead widened amid a rise in COVID-19 cases and civil unrest. (Drew Angerer/Getty Images)
By Eli Yokley

President Donald Trump’s push for re-election, which began on paper the day of his inauguration, sought to replicate the conditions that brought the unpopular political outsider into office four years ago on the back of a victory over Democratic nominee Hillary Clinton, energizing his core supporters with a base-first strategy and railing against U.S. institutions that he said had failed Americans.

But 2020 was not 2016, and former Vice President Joe Biden — a moderate, inoffensive elder party statesman who evoked nostalgia for the years of Barack Obama’s presidency — was not Clinton. He wasn’t from the liberal wing of the Democratic Party like Sens. Bernie Sanders (I-Vt.) or Elizabeth Warren (D-Mass.), whom he defeated in the primary, either. As a result, this year’s presidential race was evaluated by voters as more of a referendum than a choice, something underlined by Morning Consult exit polling, which showed nearly half (44 percent) of Biden voters saying their vote was more about Trump than their own candidate.

In a tumultuous year blighted by a pandemic and civil unrest over racial injustice, that was enough to doom Trump, who became the first presidential incumbent to lose re-election in nearly 30 years. Fueled largely by gains among whites, women and independents in the suburbs of battleground states and historic levels of turnout in reliable, urban Democratic strongholds, Biden held all of the states carried by Clinton four years ago, and flipped Arizona, Michigan, Nebraska’s 2nd Congressional District, Pennsylvania and Wisconsin en route to 290 Electoral College votes, securing the The Grand Canyon State for the Democrats for the first time since 1996.

At the time news organizations called the race, Biden was leading in Georgia, setting up the prospect for the first Democratic presidential victory there since 1992, and a 306 electoral vote haul — the same amount garnered by Trump four years ago.

The president-elect – who declared a “mandate for action” on the pandemic, climate change, the economy and systemic racism on Friday night, when the race’s result was becoming clear – issued a statement Saturday calling on the country to “put the anger and the harsh rhetoric behind us and come together as a nation,” even as Trump said he was “rushing to falsely pose as the winner” and vowed to fight him in court.

“It’s time for America to unite. And to heal,” Biden said.

The twists and turns of an unrelenting year — the dawn of the pandemic, the summer protests, the party conventions or the president’s diagnosis — had a cumulative effect on public sentiment, and the summertime unrest appeared to solidify Biden’s lead. But Morning Consult Political Intelligence tracking nationwide chronicled a remarkably stable contest, even going back before 2020.

In November 2017, when the Delaware Democrat’s book tour sparked talk of a potential presidential run, he led Trump by 11 percentage points among registered voters in a Morning Consult/Politico poll. His standing at the time — which came after voters soured on the president following his firing of former Federal Bureau of Investigation Director James Comey, an unsuccessful push to repeal the Affordable Care Act and amid negative sentiment about the direction of the country after Trump’s response to an August 2017 white nationalist rally in Charlottesville, Va. — was roughly in line with how a generic Democrat performed against the president.

As Biden prepared to launch his bid in April 2019, Morning Consult polling of registered voters showed him with an 8-point lead over Trump, helping to fuel the “electability” argument he and his supporters would hammer home in the Democratic nominating contest. Supplementing Biden’s pitch was his early popularity compared with other Democratic candidates in several key battlegrounds that the party lost in 2016. 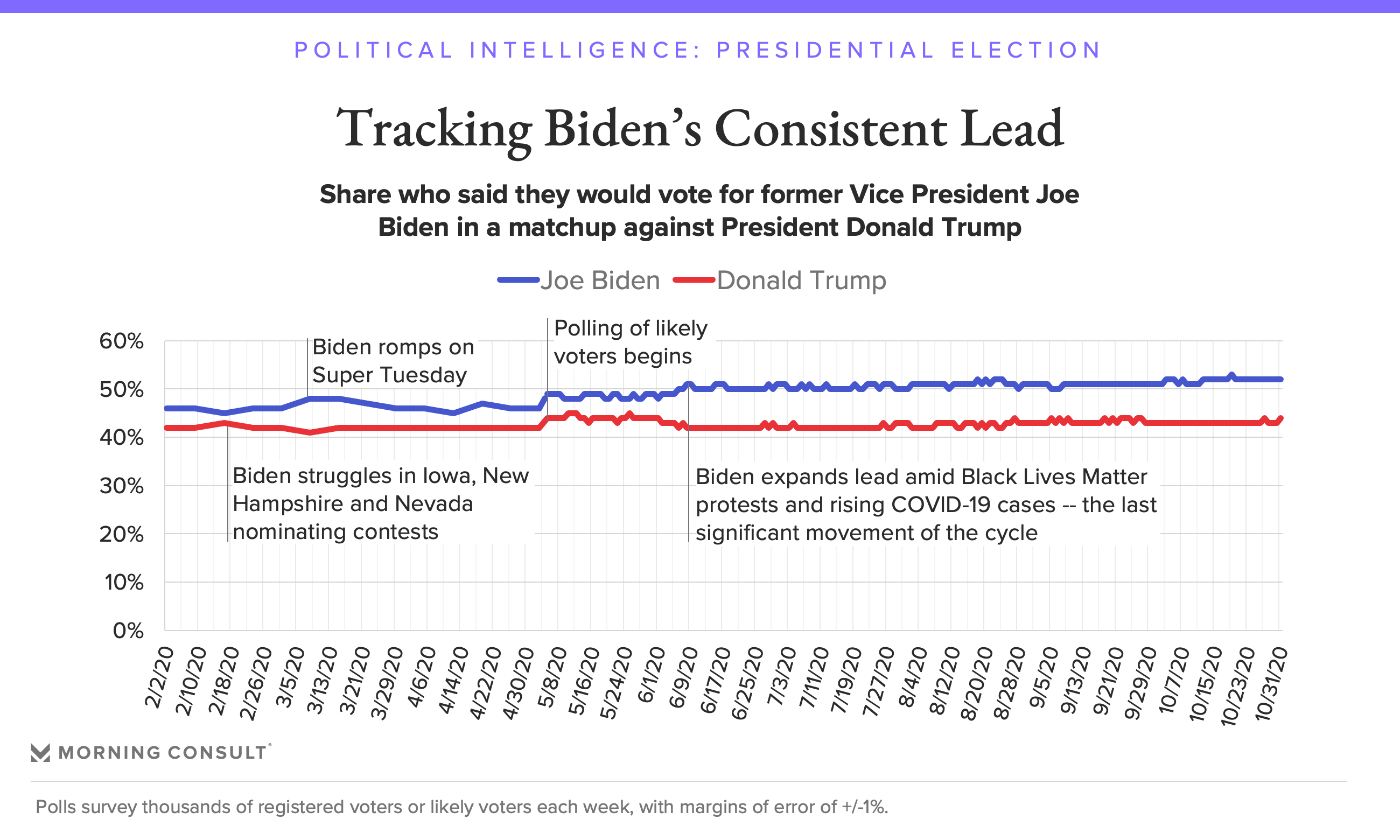 In the Democratic primary, Biden continued to lead Trump in national polling, but his standing reached its nadir, especially among older and Black voters, after his early losses in Iowa, New Hampshire and Nevada. But then Biden made a comeback: He trounced his rivals in South Carolina, home to a large share of Black primary voters who fueled his primary bid, before two of his challengers — Sen. Amy Klobuchar of Minnesota and Pete Buttigieg of Indiana — dropped out of  the race and immediately endorsed his bid in the runup to Super Tuesday. He decisively won those March 3 contests, effectively ending the campaigns of moderate billionaire Michael Bloomberg and Warren.

Over the course of 12 days from the end of February to the beginning of March, Biden’s first-choice support among Democratic primary voters tripled, from 19 percent to 57 percent. The numbers quashed Sanders’ last stand against him, and brought the larger swath of the electorate — driven by renewed support among older and Black voters — back to Biden.

Though Sanders stayed in the race, Biden virtually solidified his status as the presumptive Democratic nominee in early March, just as the country screeched to a halt amid the pandemic and Trump declared COVID-19 a national emergency. The pandemic closed America’s doors of commerce, stalling the economic progress the president was counting on to carry him to re-election, leading to historic levels of unemployment and upending the traditional rhythm of an election year. But that’s not to say COVID-19 necessarily doomed the president. 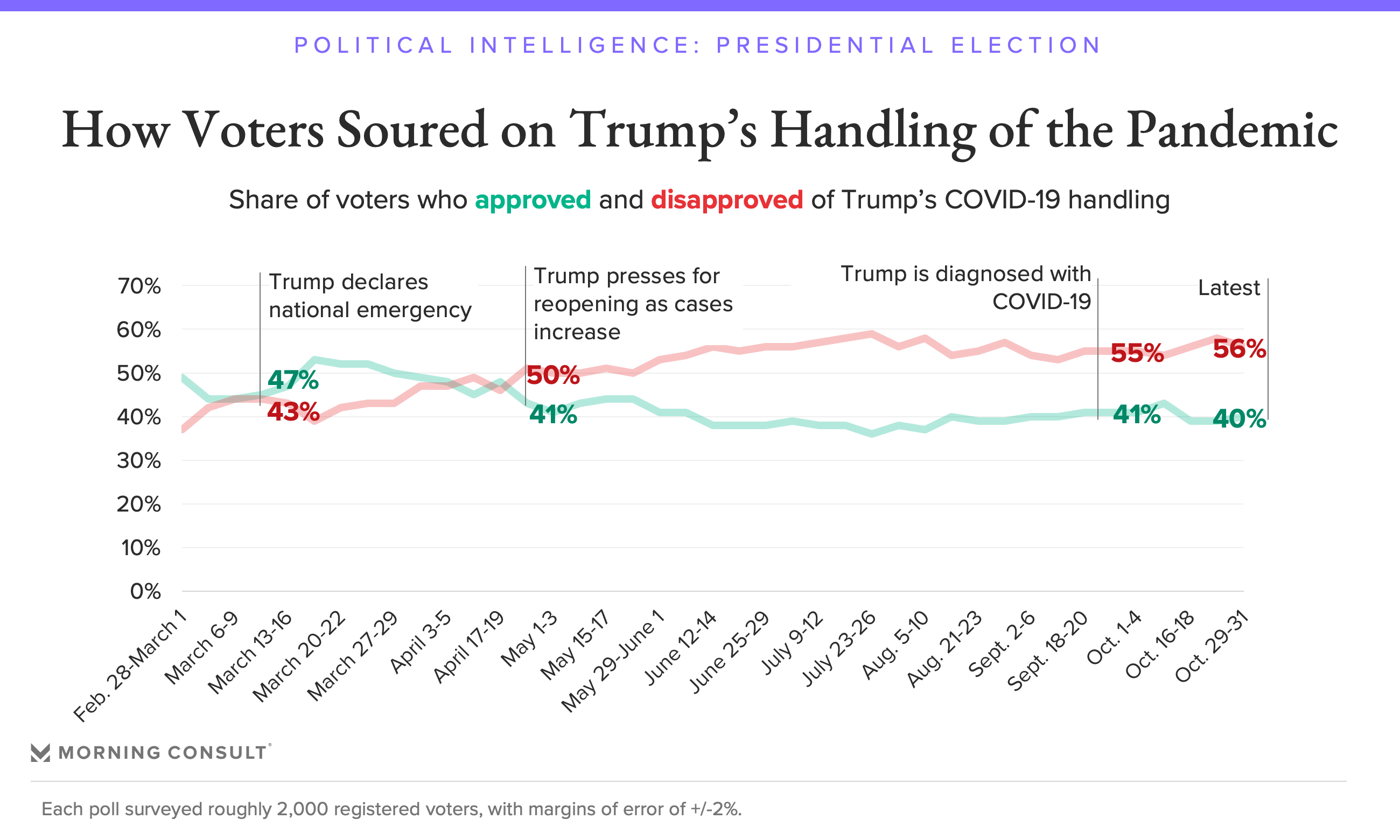 At the beginning of the pandemic, when voters were starting to take it seriously and responding to Trump’s actions and rhetoric, they generally approved of Trump’s handling of the outbreak. But disapproval of Trump’s pandemic handling began to increase as the number of cases rose in April and amid his push to reopen the country — and that sentiment has remained high since a summertime surge that began in early June.

In the pandemic’s early days, Trump held back from the campaign trail, replacing his rallies with often lengthy televised visits to a White House podium. While the nightly briefings presented an opportunity to respond to America’s coronavirus fears, Trump commonly wound up on the defensive — criticizing the health officials and Democratic governors in places where cases were spiking, blaming China and contradicting his advisers such as Dr. Anthony Fauci, whom polling has consistently found voters trust over the president on the pandemic.

In those first few months, Biden’s campaign was relegated to the basement and porch at his home in Delaware. Biden’s efforts to remain socially distanced amid the virus became an attack line against the Democrat, but they also served as a means for him to contrast the two candidates’ approaches to the spreading pathogen throughout the campaign.

By summertime, the state of the country was looking more dire to voters. There was more chaos in the form of social upheaval after the Minneapolis police killing of George Floyd prompted Americans in small towns and big cities to pour into the streets to protest the deaths of Black Americans at the hands of police officers. The twin crises — in which voters saw surging coronavirus case counts alongside images of unrest in America’s cities — led to the worst voter sentiment about the trajectory of the country since just after Trump’s victory in November 2016, according to Morning Consult/Politico polling of registered voters, and the numbers have not recovered.

At a time when his campaign was being criticized for staying off the physical campaign trail, Biden used the divisive moment to pivot to an appeal for unity, hearkening back to the theme of his campaign — which he credited to the 2017 Charlottesville protests — to “restore the soul of America.” Polling showed Biden was consistently ranked as the best leader to unite the country.

Trump, on the other hand, used the moment to play into voters’ fears, replacing his previous bogeymen — violent migrants or Islamist extremists — with the new specters of “antifa” and rioters. He launched into a spate of law-and-order messaging, encapsulated by a photo opportunity near a church outside the White House where Black Lives Matter demonstrators had just been cleared by police who disbursed tear gas in the air.

Trump took that message to the Republican National Convention in August, declaring “no one will be safe” if Biden was elected. But the former vice president — who condemned violence during street protests while aligning himself with the overall Black Lives Matter movement — maintained an advantage over Trump on the issue of public safety that he held throughout the campaign, holding on to support from women and suburbanites even as the president was trying to capture their vote.

At the Democratic National Convention a week earlier, Biden used the platform to reintroduce himself to the American public, shore up his own image and promise to “build back better.” While it resulted in no significant change in his polling lead against Trump, the event had a sustained impact on voters’ perceptions of him, pushing his favorability rating above water through Election Day. 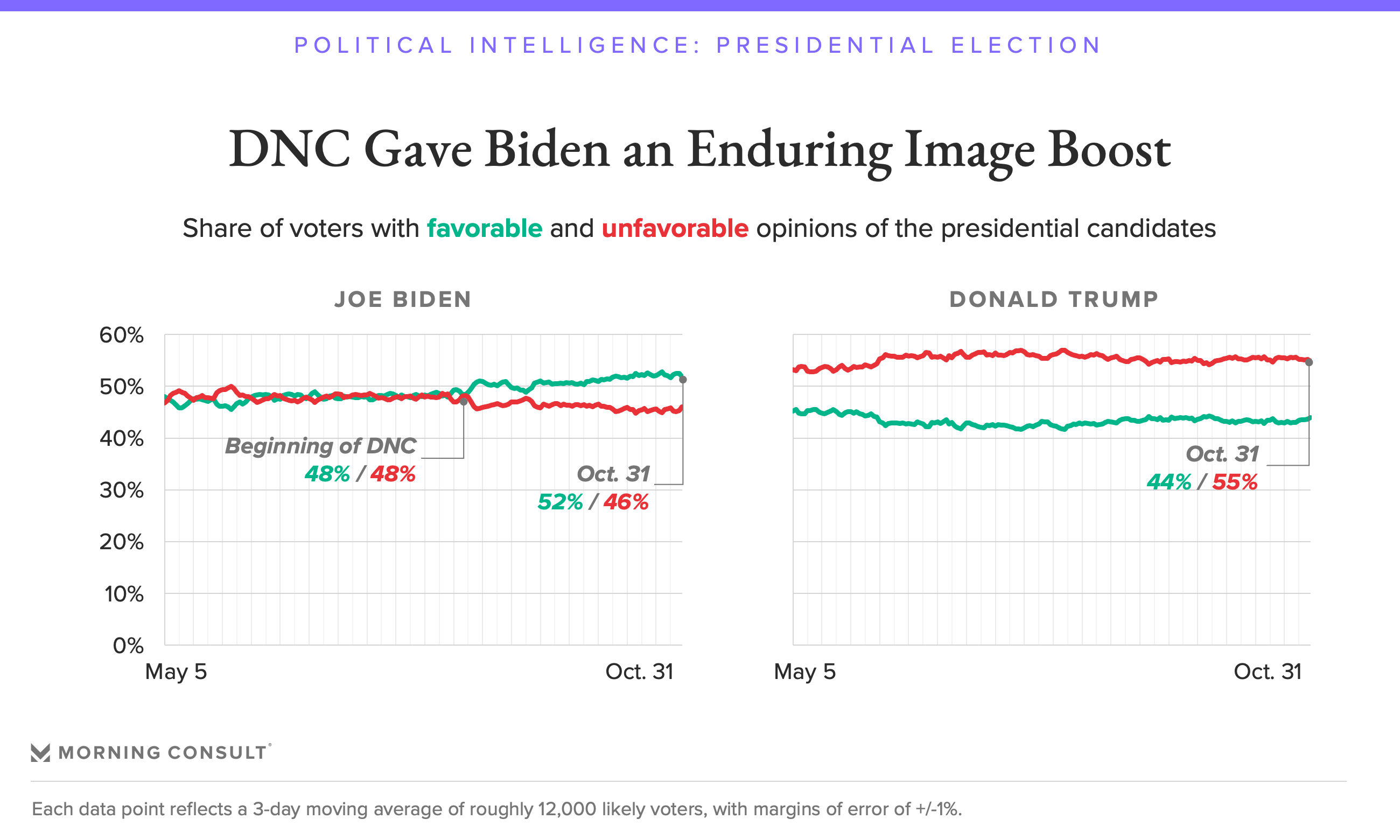 The favorability boost helped mitigate the attacks from the president and his allies as the campaign heated up that fall: The GOP launched messaging aimed at convincing voters that Biden, age 77, was mentally unfit for office (which voters did not buy) and that Biden’s supposed lack of mental acuity made him vulnerable to manipulation by the Democratic Party’s left wing after he selected Sen. Kamala Harris — a California senator with a liberal voting record — as his running mate.

None of that resonated with the overall electorate.

While voters perceived Biden as more liberal after he secured the nomination than before, Morning Consult polling after Biden’s selection of Harris and after the vice presidential debates found voters ranked both Biden and Harris as more moderate than Trump or Vice President Mike Pence. The two Democrats also ranked closer to the average voter’s definition of an ideal candidate in multiple surveys.

Along with the failed attack lines, Trump caught no slack heading into the campaign’s final month. His first debate performance was widely criticized due to his persistent interruptions of both his opponent and the moderator, while his selection of Judge Amy Coney Barrett to replace Justice Ruth Bader Ginsburg on the Supreme Court following her September death — a popular move that had the potential to excite conservatives — was quickly overshadowed by news that he had contracted COVID-19. Trump gained no sympathy bump in favorability or campaign support after the news and his subsequent hospitalization, and polling showed voters largely blamed Trump’s own laissez-faire attitude toward the virus for his diagnosis.

As he revved up his schedule of campaign rallies in October, Trump continued to downplay an uptick in cases, ceding ground to Biden on voters’ most pressing concern. An Oct. 23-25 Morning Consult/Politico poll found 49 percent of voters trusted Biden to handle the pandemic, compared with 35 percent who said Trump. 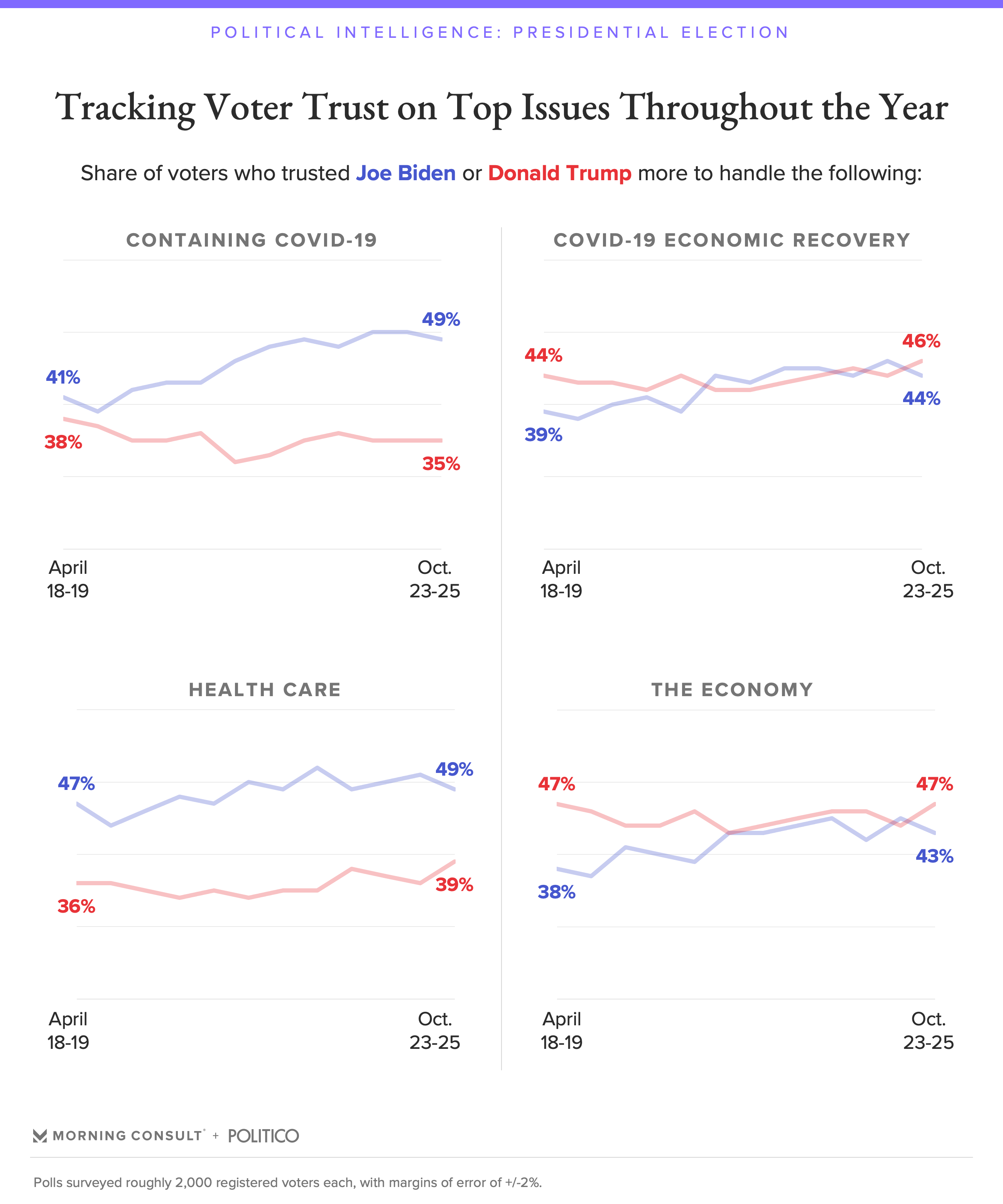 The coronavirus overshadowed his talk from the stump about the economy and jobs, an issue where he ended the campaign with an advantage — particularly among Republican voters — over Biden, albeit a smaller lead than when the campaign began. But by the end of the campaign, there were very few undecided voters left to be swayed by any messaging: A week before the election, Morning Consult polling found that 3 percent of voters hadn’t made up their minds, compared to 11 percent at the same point in 2016.

At a rally in Wisconsin the night before Election Day, Trump seemed to acknowledge the reality that the race was a referendum on him alone.

“This isn’t about,” he said before stopping himself. “Yeah, it is about me, I guess, when you think about it.”