For Independent Podcasters, Recurring Membership Payments Can Lead to Profitability 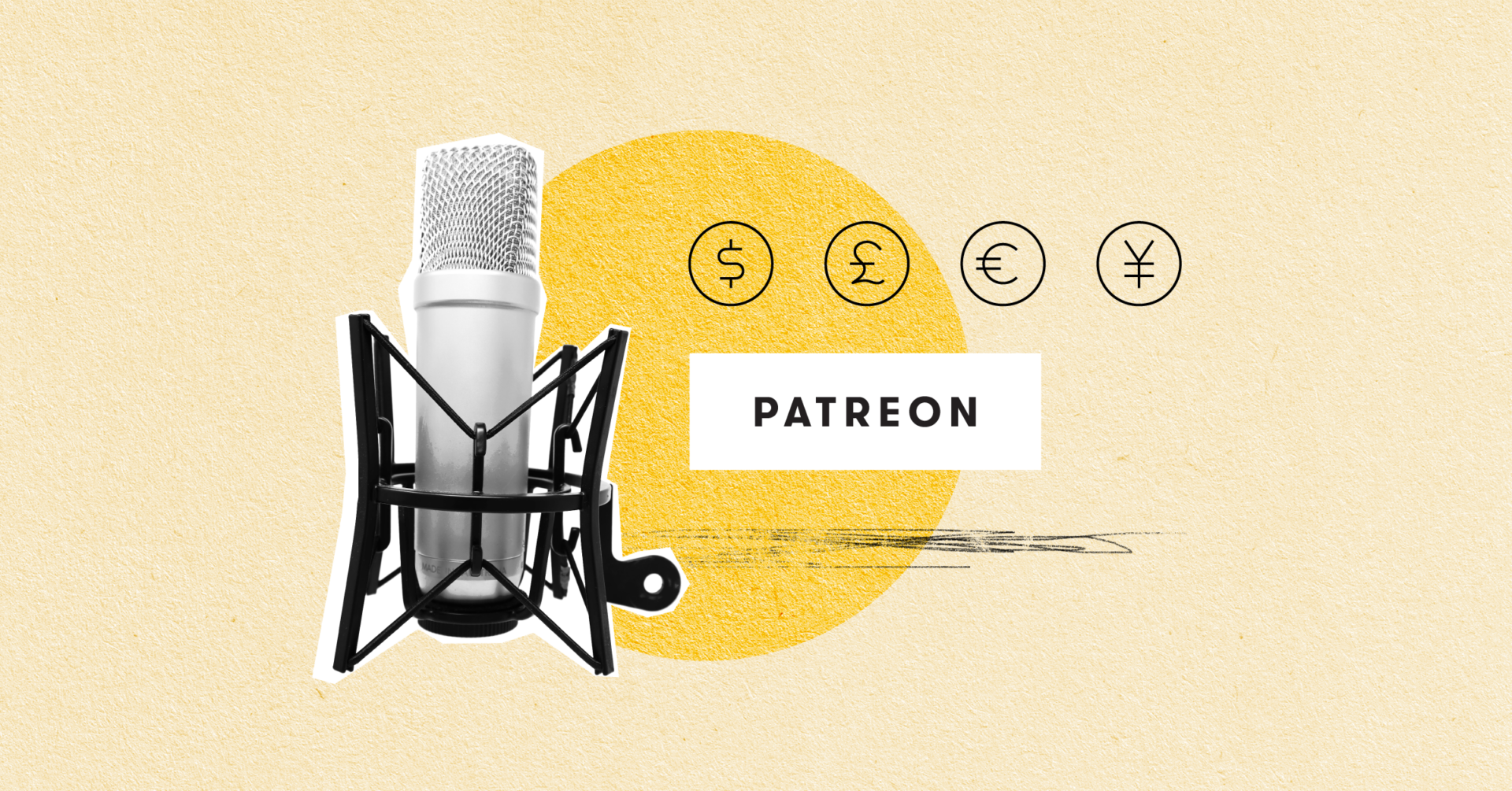 As podcasting works its way into the mainstream, major media and tech companies such as Spotify Technology SA now come to mind when people think of the medium. But there’s still a large part of the industry made up of independent creators unaffiliated with major brands, advertisers or venture capitalists. To generate revenue, many of them turn to membership platform Patreon.

That move is likely as good a bet as joining the walled garden world of subscription podcast platforms, according to polling from Morning Consult. 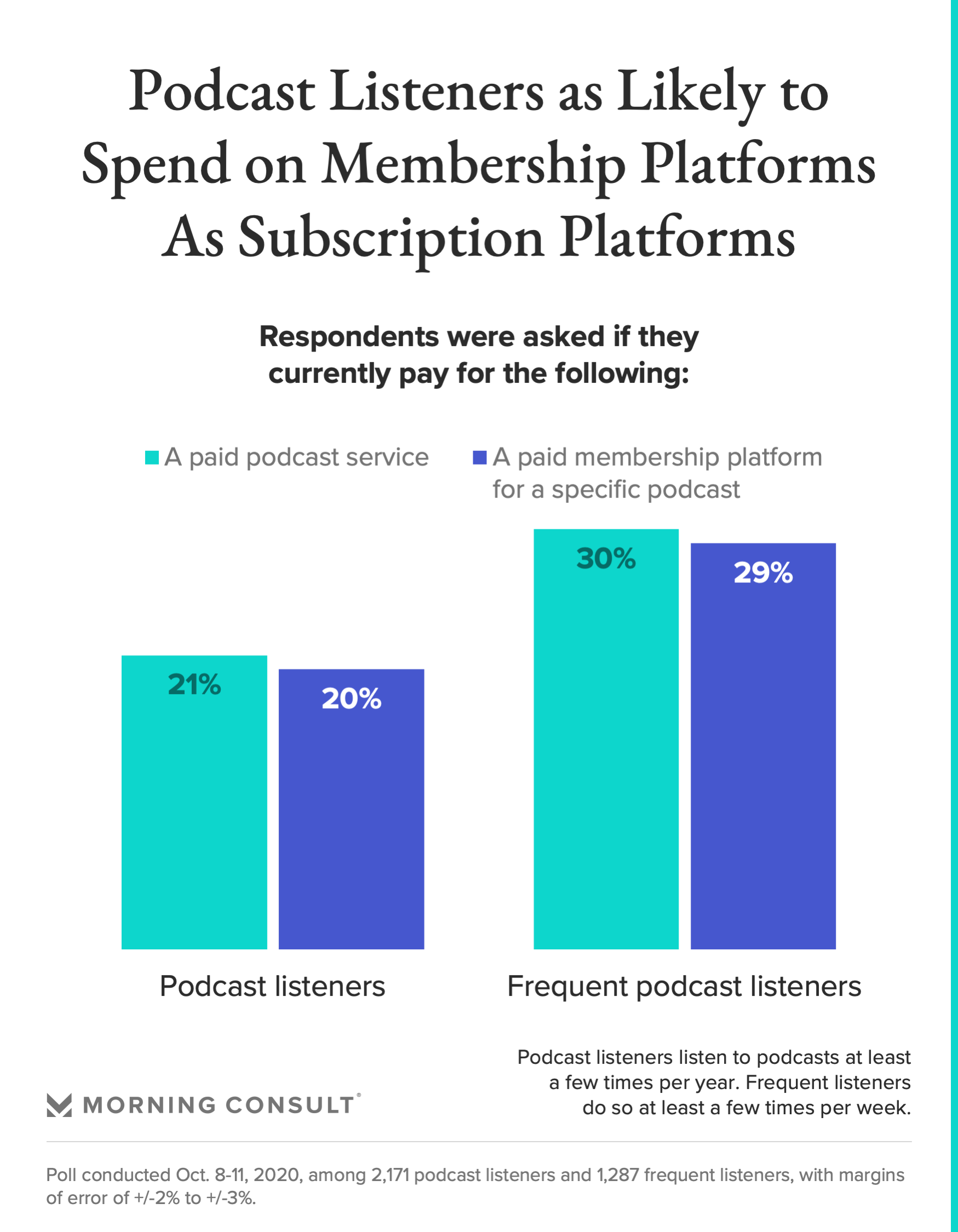 While 21 percent of podcast listeners said they subscribe to a paid podcast platform such as Luminary, another 20 percent said they pay for podcasts through a subscription-based platform such as Patreon, according to the Morning Consult survey, conducted Oct. 8-11 among 2,171 U.S. adults who indicated they listen to podcasts at least a few times a year. That difference falls within the 2 percentage-point margin of error.

Frequent podcast listeners, whom Morning Consult defines as listening to podcasts at least a few times a week, are also just as likely to pay for their favorite shows through a membership platform for a specific podcast as they are through subscription services.

Amanda McLoughlin built her podcast company, Multitude, in 2018, partially by relying on revenue generated through Patreon, a platform that allows people to make regular contributions to their favorite content creators. In exchange, patrons get access to offerings such as bonus episodes, live shows, merchandise and exclusive chat rooms.

That strategy worked for McLoughlin’s own podcast “Spirits,” which she said turned a profit by its third month of operation in 2016 thanks to Patreon. It also worked for the seven active member shows in the Multitude collective, most of which also make more than half of their revenue through Patreon, with the remainder coming in via ads, merchandise and, when possible, live shows, which are typical revenue streams for podcasters.

Patreon in particular is popular among podcasters, who make up the third largest category on the site, after musicians and visual artists, according to the company. Over the past three years, the podcasting vertical has grown five times in terms of revenue and number of creators.

That revenue allows McLoughlin to run the entire collective full time without selling any of her intellectual property to major networks to make money.

But through Patreon, podcasters can make money on their own without all the red tape. While it’s true most major companies are more interested in inking deals with celebrity podcasters as opposed to independent creators, Patreon could still pose a threat to those hoping to generate revenue through subscriptions.

Being part of a collective also helps smaller shows connect with advertisers more easily by teaming up to provide audiences at scale. Multitude shows range from 5,000 to 100,000 downloads per episode, McLoughlin said, totaling more than 2 million downloads per month, including episodes from back catalogue.

In an ecosystem that relies very little on visuals to aid with discovery, it can be difficult to grow an audience, never mind one dedicated enough to pay for one show in particular. But podcasters on Patreon show that even niche shows can succeed.

McLoughlin’s show “Spirits,” for instance, which focuses on mythology, legends and folklore, has almost 400 patrons donating anywhere from $1 to $25 per week.

“Companies are risk-averse, and they don’t want to invest in anything too unique or different,” she said. “Patreon and direct audience support provide a stability that corporate acquisitions or VC funding can’t.”