The North Pole Is Going Digital in the Age of COVID

The pandemic has pushed shopping malls closer to obsolescence, but store Santas are unfazed 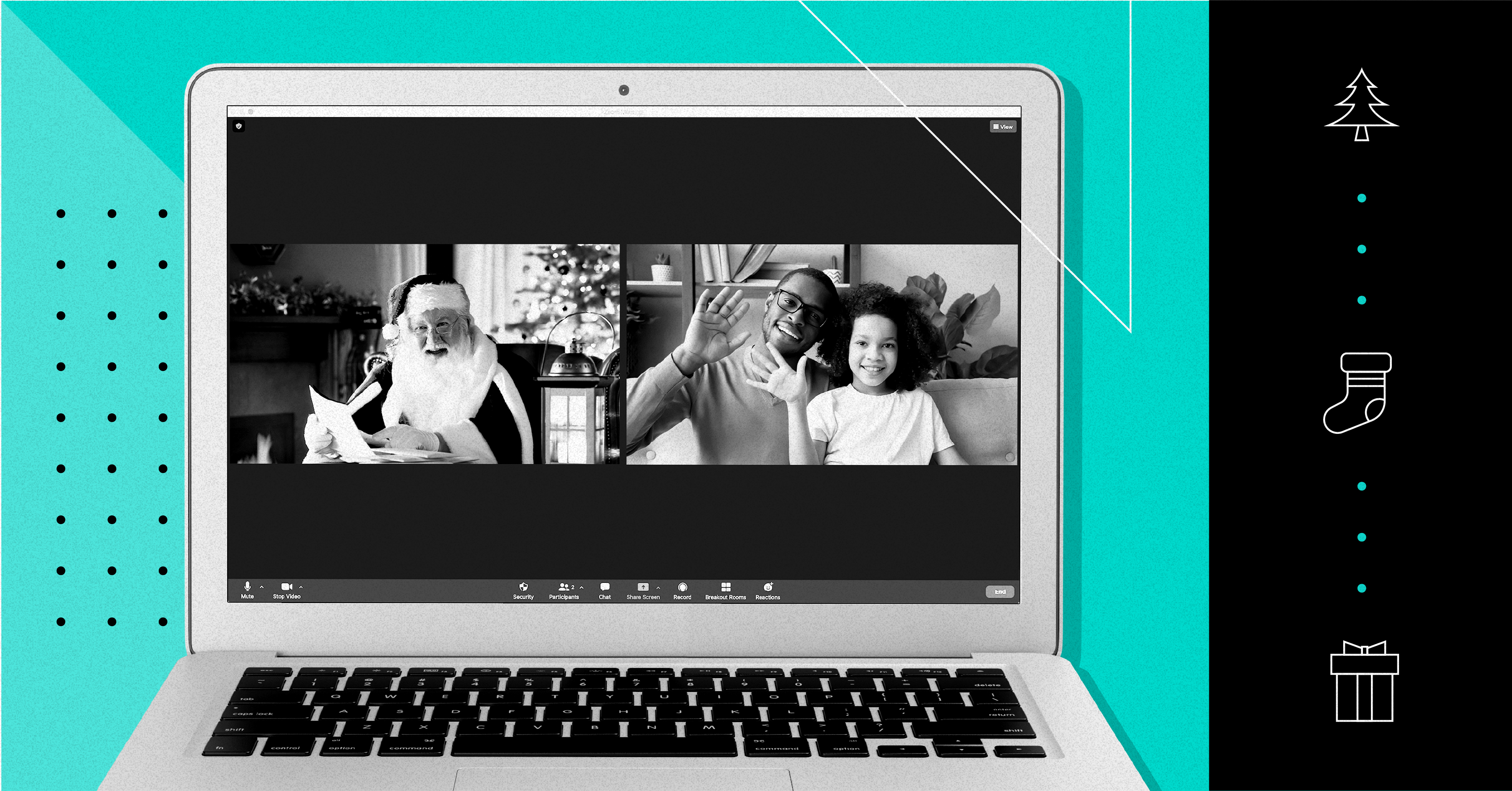 A new poll finds that 38 percent of parents typically bring their children to visit with Santa; this year, that share is down to 27 percent. (Getty Images / Morning Consult Illustration by Samantha Elbouez)
By Alyssa Meyers

Stephen Arnold is no stranger to frequent, close-quarters social interactions with people he’s just met. As a professional Santa Claus performer for a decade, now serving as the president and chief executive of the world’s largest Santa membership organization, Arnold typically sees hundreds of children each Christmas season, as they get up close and personal to inspect his beard and rattle off their wishlists.

This year, Arnold’s version of Santa as part of IBRBS — previously referred to as the “International Brotherhood of Real Bearded Santas” until it started including Mrs. Clauses in 2016 — will be less easily accessible. At his local botanic garden in Memphis, Tenn., Arnold will be installed in a massive sleigh that puts his head eight and a half feet above the ground, comfortably out of reach of children, but within frame for photos.

At St. Jude Children’s Research Hospital, he plans to light their Christmas tree this year from inside of a 12-by-12 pop-up tent snowglobe, complete with lights and a “snow-like” material surrounding the base.

“Dearly, I want to hug the kids back, but it’s just not the year to do that,” Arnold said. “But people aren’t abandoning Santa; they’re just asking how we can be creative and keep him coming.”

Shopping malls, long the holiday domain of Santas, likely aren’t the answer. Foot traffic was on the decline even before the pandemic, and this year, 35 percent of Americans said they plan to shop less at malls than usual, according to Morning Consult analysis.

Related: How COVID-19 Is Changing the Holiday Shopping Season

But across the board, Santa performers seem calm — jolly, even — about the outlook for 2020. That’s because amid the ongoing global pandemic, they have successfully convinced families to book virtual visits to the North Pole this season, something that new polling shows is a growing — albeit not universally popular — practice.

At first, things were looking bleak, said Mitch Allen, head elf at HireSanta, a company that connects consumers with Santa performers for hire. During the second quarter, new inquiries about visits with Santa were down 90 percent year over year. But as of mid-to-late September, they were down only 20 percent. That’s thanks to an increase in bookings for both in-person and virtual visits.

“There’s going to be a substantial amount of work to be done virtually,” Allen said. “For the Santas that are a little tech savvy, they’ll be able to have a pretty similar year in terms of hours worked.” 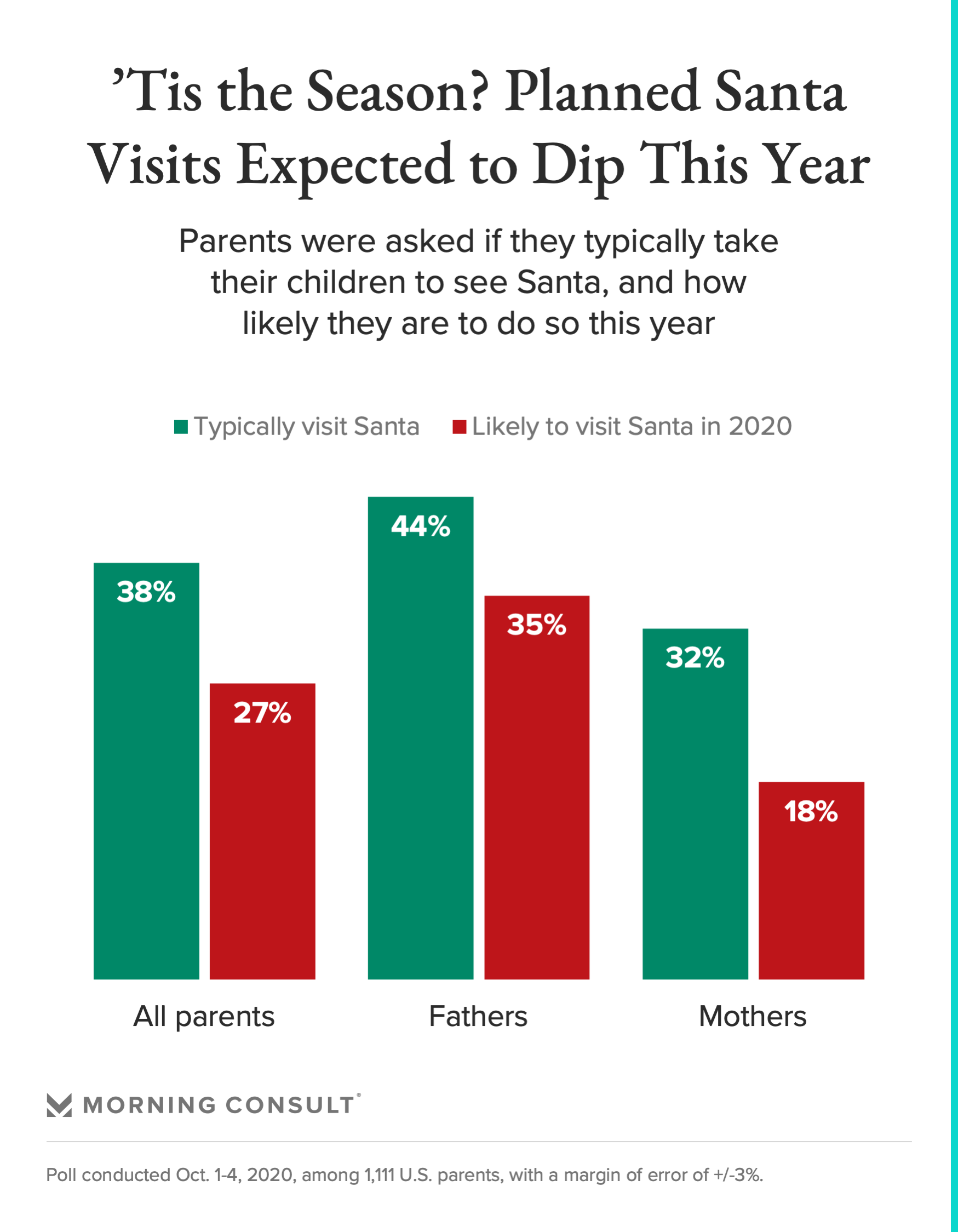 Dads, more so than moms, are dedicated to keeping the tradition alive this year: Men were twice as likely as women to say they’re planning to bring their children to see Santa. The survey of 1,111 U.S parents, conducted Oct. 1-4, 2020, holds a margin of error of 3 percentage points.

HireSanta, which places performers in retail settings, corporate parties and at-home visits, is offering a mix of in-person and virtual Santa experiences to customers this year. Virtual visits were first offered during the 2017 holiday season, and Allen said demand for Santas via screen rose significantly this year.

The company, which gained fame on the ABC show “Shark Tank,” charges retail clients about $50 to $150 per hour to book Santas for in-person visits, depending on factors such as performance specifications, with prices rising to as high as $395 per hour on Christmas Eve. Virtual visits for individual families start at $59, with a more affordable option for pre-recorded messages at $39. HireSanta said it’s unclear if this year’s revenue will match that of a typical holiday season.

GigSalad, a third-party platform used to book entertainers, said it saw 358 requests for Santas in the first four days of November, compared to 449 requests during the same four days last year, a slight-but-expected dip. Most of this year’s requests have been for in-person appearances, the company said.

While some retailers are betting there will still be interest in seeing Santa in person, many of the Santas themselves aren’t taking the risk.

“For the most part I’m sitting out this season,” said Ed Taylor, a Santa performer who also runs the Worldwide Santa Claus Network, a group with more than 3,000 members that’s akin to a trade organization. Taylor, who first put on the red-and-white suit in 2003, is turning down major sources of income this year for the sake of social distancing.

In 2011, Taylor took a job with Microsoft Corp. when the tech giant wanted pictures of Santa to demo new photo software. The next year, he started doing TV shows and commercials, including ads for Fiat Chrysler Automobiles NV, Reddi-wip, Band-Aid and Kohl’s Corp.

He also typically does volunteer work for hospitals, works with the Make-A-Wish Foundation and makes appearances at high-profile company parties, parades and tree lightings. Taylor doesn’t plan to participate in any of those activities this year, relying instead on virtual visits, although he said he might make an exception if he can book a gig with a major brand that doesn’t require him to travel far from home.

Santa performers do fairly well in terms of income, Taylor said, noting that some volunteer and accept tips, while those looking for an annual salary can bring in up to $60,000. Seventy to 80 percent of Santas make less than $10,000 per year, he added, with the bulk of them pulling in around $4,000 to $7,000 per season.

Hundreds of performers, including about 100 Mrs. Claus performers, have signed on this year with JingleRing, a startup founded in April designed to provide virtual Santa experiences to families around the world.

That includes Bill and Laura Hoglund, a “Claus couple” who have been performing as Santa and Mrs. Claus for seven years and typically make appearances at various businesses and organizations around Westchester, Ill., during the holiday season.

From Nov. 14 through early January, the Hoglunds said they’ve scheduled more than 200 hours worth of virtual calls through JingleRing, more hours than they would typically put in for in-person visits, with the post-Christmas calls serving as “gratitude visits” for parents encouraging their children to say “thank you” to Santa.

Virtual meetings provide other benefits, as well. JingleRing Chief Executive Walt Geer said the company’s platform, which was developed in-house by a chief technology officer who worked on an early team responsible for building Microsoft Office, allows families to provide information about the number of children meeting with Santa, what language they speak, the names of their pets and stuffed animals and more.

Users can also choose Santas of different racial and religious backgrounds, and more than 200 of the performers have been trained to work with children with special needs.

Pre-recorded messages that last about two to three minutes cost $19.95, while live bookings start at $24.95 and increase depending on date and add-ins, such as additional performers and book readings. 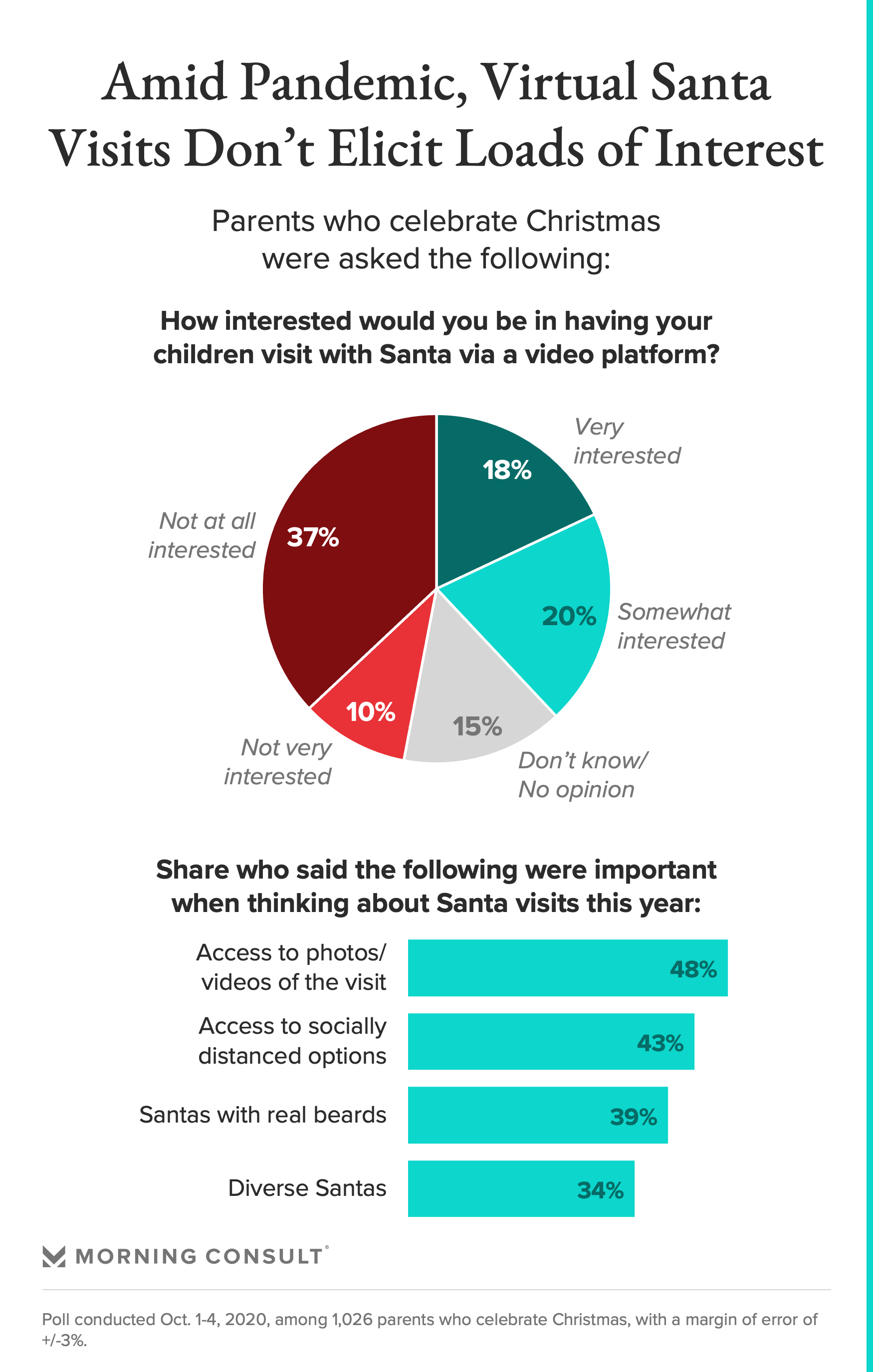 Pre-sales launched Nov. 1 and regular bookings opened Nov. 5. Geer said he has so far been pleased with interest, but declined to go into further detail about sales numbers. Brands are also betting on the platform, with industry leaders including Brookfield Properties and Bass Pro Shops using JingleRing to provide virtual experiences to customers who don’t feel comfortable seeing Santa in person.

For Santa performers, JingleRing and other more mainstream platforms such as Zoom or Skype are an attractive alternative to in-person visits, especially since many of the performers are part of at-risk groups for contracting the coronavirus.

But among many tradition-loving parents, there could be some trepidation to adoption this Christmas. Thirty-eight percent of parents who celebrate the holiday expressed interest in having their children visit with Santa through a virtual platform this year. With Santas opting out of malls, however, parents might have to adjust anyway.

“I don’t necessarily want to be at an open event with anyone this year, not so much for my own safety, but when you’re talking about seeing so many kids, then what I’m doing is not safe for anybody,” said Dee Sinclair, who started The Real Black Santa, a full-service Santa company based in Atlanta.

Geer, of JingleRing, is betting the virtual Santa trend will take off this year and long into the future.

“We think there’s going to be really high demand for this sort of thing,” said Geer, whose company PictureU, separate from JingleRing, has seen over 30 million people visit with its on-premise retail Santas since 2008. “I think there’s going to be a certain amount of people who still want to see Santa at the mall, but millions of more who will love the more intimate experience.”