Digital-Native Gen Zers Have Yet to Fully Embrace Podcasts. Networks Have a Plan to Fix That: Influencers

32% of Generation Z classify themselves as regular podcast listeners

For a generation that’s always online, relatively few Gen Zers regularly tune into podcasts. But as the podcast ecosystem grows, many players in the industry are working to attract the up-and-coming generation by putting their favorite social media stars behind the mic.

Thirty-two percent of Gen Z classified themselves as regular podcast listeners, according to a Morning Consult survey conducted Aug. 21-23 among 1,000 Gen Zers between the ages of 13 and 23. That’s a smaller share than the 49 percent of the 4,400 U.S. adults surveyed in an Oct. 8-11 poll who indicated that they listen to podcasts at least a few times a year. 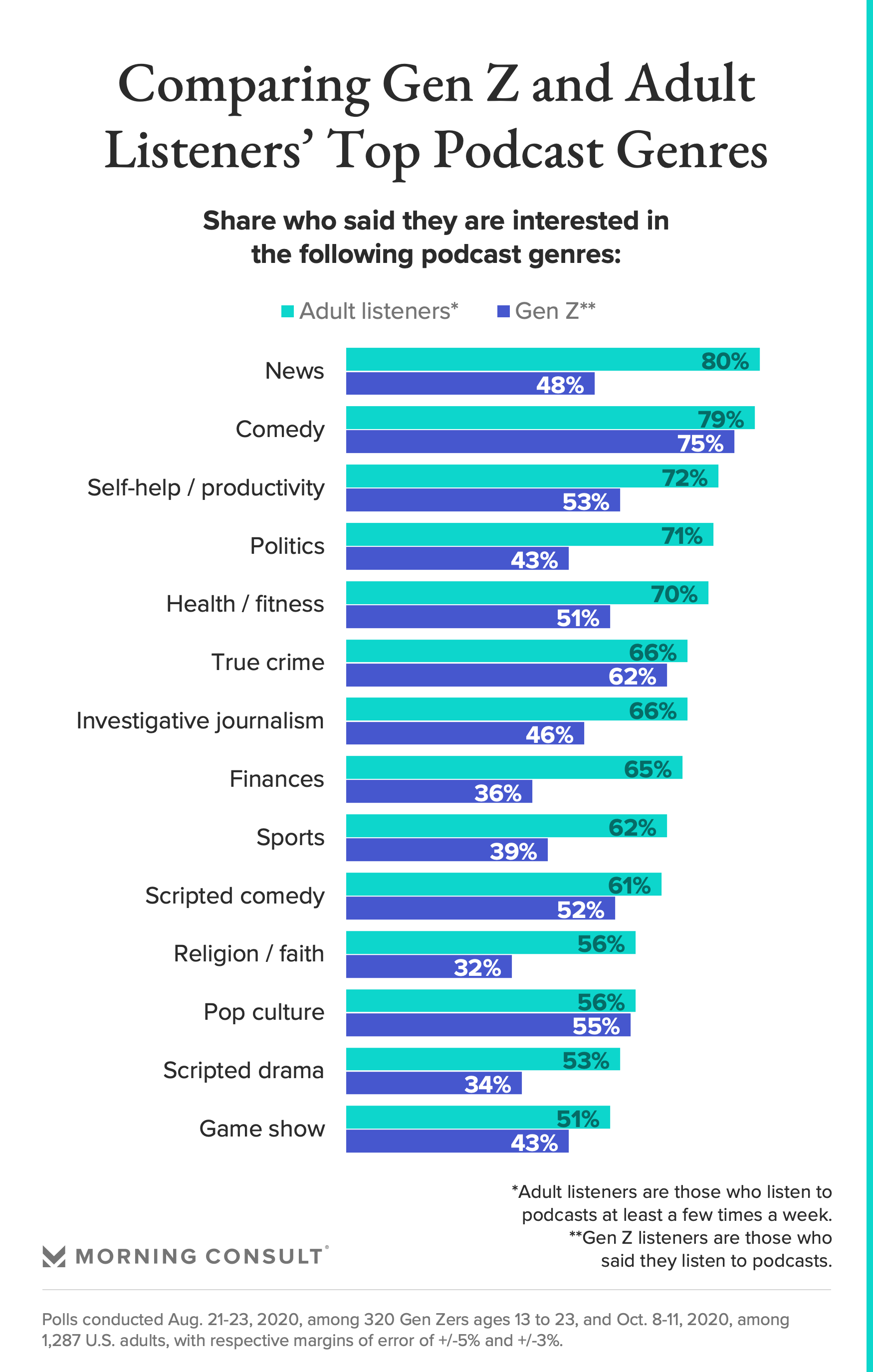 Gen Zers are most likely to be fans of comedy podcasts, with 75 percent of young listeners saying they are interested in the genre, a view shared by nearly 4 in 5 percent of frequent adult listeners — categorized in the October survey as those who said they listen to podcasts at least a few times a week. Gen Z listeners also showed interest in true crime (62 percent) and pop culture (55 percent) podcasts, while adults who are frequent listeners favored news (80 percent) and self-help or productivity podcasts (72 percent).

The frequent listener subsample among all adults has a 3-point margin of error.

While news podcasts are more popular among all adults than they are among Gen Zers, younger audiences are showing more interest in the genre, especially since the election, said Chris Corcoran, chief content officer at podcast company Cadence13. The Entercom Communications Corp. division started out developing and monetizing shows for other networks, but now creates its own original content, including a network dedicated to some of the podcast hosts Gen Z likes best: influencers.

“We’re seeing a huge increase in Gen Z audiences,” he said. “Because these stars are coming into the space, they’re bringing their fans with them.”

Comedy podcasts represent another genre that has been on the rise, said Russell Weissman, vice president of marketing and audience for All Things Comedy, a top comedy podcast network founded in 2012 by comedians Bill Burr and Al Madrigal.

Comedians were early adopters in the podcasts space, giving the genre a leg up over more emerging categories, but Weissman said the network experienced a “consistent climb” in listeners throughout the lockdown period at the start of the coronavirus pandemic.

Weissman attributed that success in part to the typical style of an All Things Comedy show: unscripted, personality-driven content that’s easily accessible and easy to discuss. That’s a format familiar to most influencers as well.

“Our engagement from fans has become stronger and louder, because they’re looking for that community-based activity,” he said.

Both Cadence13 and All Things Comedy promote their shows and encourage engagement by stepping outside the realm of audio to attract a wider audience, meeting Gen Z on familiar platforms such as YouTube and TikTok. Securing big-name influencers, and their even bigger followings, doesn’t hurt either.

“Their fans look at everything they do and are aware of that,” said Corcoran. “They’re going to have the built-in base already.”