Authors warn that without federal support, rising COVID-19 cases and traditionally slow hiring during season could lead to more layoffs

A new report shows that the clean energy industry continued to see slow job growth in October, but the authors raised concerns that the winter months could bring not just smaller gains in jobs but also a resumption of layoffs.

The report released Thursday from BW Research Partnership Inc. found the clean energy sector added 23,838 jobs last month, nearly double the increase from the 12,479 jobs gained in September, but the industry as a whole has yet to recover 454,024 positions lost since February as a result of the COVID-19 pandemic’s impact on the U.S. energy sector.

October marked the fourth consecutive month that clean energy employment gained back less than 1 percent of renewable employees who were laid off during the pandemic, according to the report, which is part of an ongoing project documenting the impact of the pandemic on the sector’s employment, co-commissioned by Environmental Entrepreneurs (E2), E4TheFuture and the American Council on Renewable Energy. 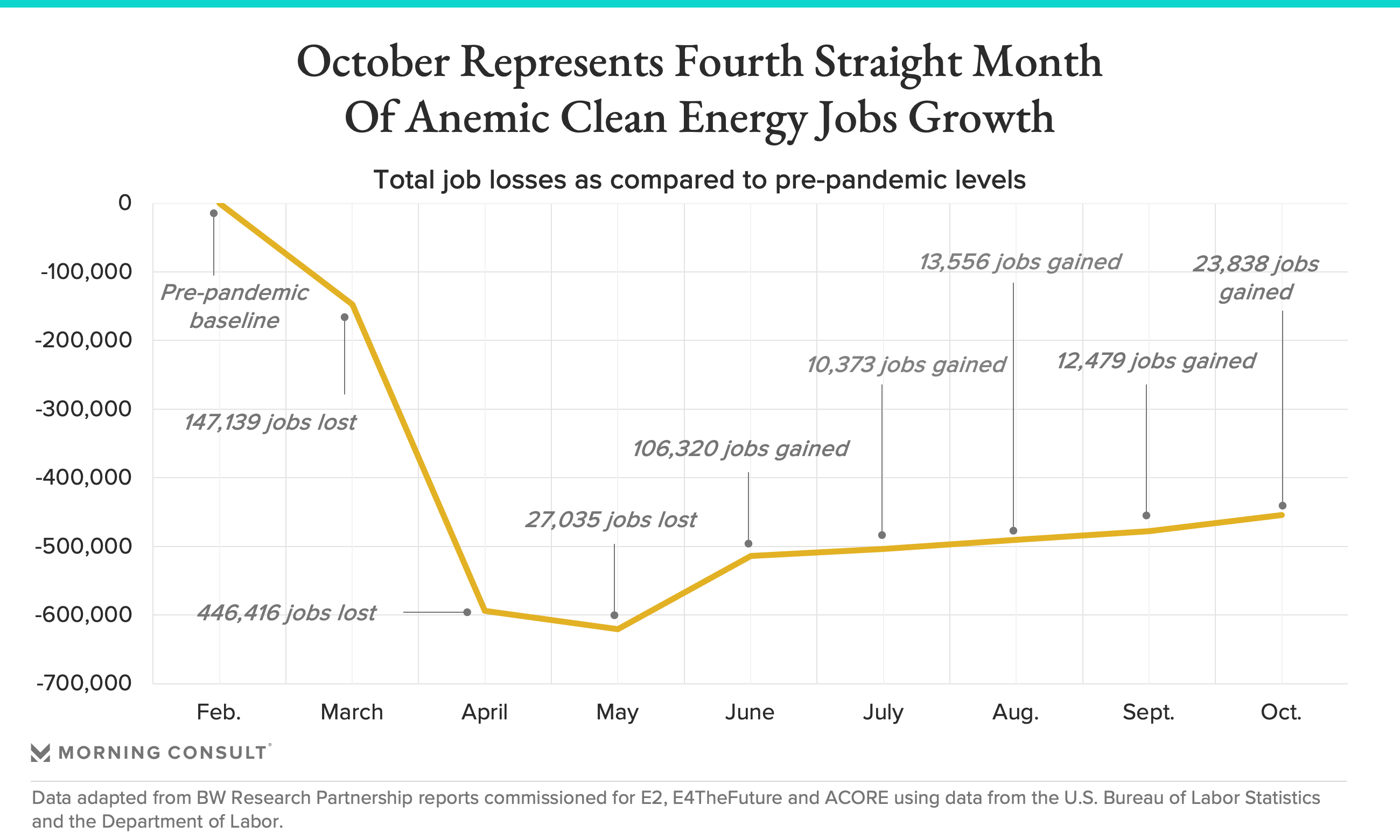 The authors also noted that if the clean energy sector continues job growth at its current rate, it would take over 18 months for the industry to bounce back to pre-pandemic employment levels. In addition, the sector would need until 2023 to hit its projected 2020 job growth rate of 5.3 percent that was forecast before the pandemic.

The authors also warned that the gains the clean energy sector has made could be in peril in the coming months, when hiring in the winter tends to slow down in general and when COVID-19 cases are expected to increase across the United States.

While most states have not indicated whether they will institute lockdowns, the economic shutdown earlier in the pandemic played a role in the loss of more than 620,000 jobs for the clean energy sector between March and May.

Potential job losses could be exacerbated without intervention from the federal government, the report said, especially since previous financial aid from earlier stimulus programs has dwindled. Senate Majority Leader Mitch McConnell (R-Ky.) said shortly after the election that Congress should pass a stimulus package before the end of this year, but previous negotiations on such a deal between House Speaker Nancy Pelosi (D-Calif.) and Treasury Secretary Steven Mnuchin have failed.

Gregory Wetstone, president and chief executive of the American Council on Renewable Energy, said in a news release that Congress could also help by offering temporary refundability for renewable tax credits and a delay in the scheduled phaseout of existing credits.