What the Public Wants From Its CEOs in 2020

Being open-minded, accountable, communicative, fair, positive and having integrity were the most cited characteristics

With the role of chief executive officer becoming more high profile over the past few years, the public is applying higher levels of scrutiny on who these business leaders are and how they lead.

Walmart Inc. CEO Doug McMillon elicited both public praise and criticism for wading into the gun debate in 2019, in part by limiting ammunition sales at the retailer’s more than 11,000 locations; Away CEO Steph Korey stepped down after a media investigation into her leadership at the luggage company she co-founded revealed abusive practices; and Tesla Inc. founder and CEO Elon Musk is a constant presence on Twitter, where his tweets often make company stock skyrocket or drop.

And this was all before the global pandemic and a national reckoning on racial issues.

Executives’ leadership style has become especially important in a tumultuous year such as 2020. A new survey from Morning Consult, in partnership with ASCEND, sought to explore the new rules of being a chief executive, including what characteristics employees say are the most important for leaders to have and how the coronavirus pandemic has influenced their views of their CEO.

What characteristics people want, and how that differs by gender

The public wants a leader who is open-minded and accountable, according to the Oct. 15-17 survey. Characteristics such as communicativeness, of which 46 percent of respondents selected as one of their “top five” characteristics vital for a top executive to have, are especially important during the COVID-19 era, when many Americans are doing the majority of their professional communication via computer screen.

Caroline Feeney, CEO of Individual Solutions for Prudential Financial Inc., said the two most important things she did during such a tumultuous year were maintaining a calm resolve and making an extra effort to communicate with employees at every level of the nationwide company.

“Personally, I struggled,” she said of the first few weeks of remote work. “I’m not an introvert — I’m an extrovert. And I just love that face-to-face energy.” 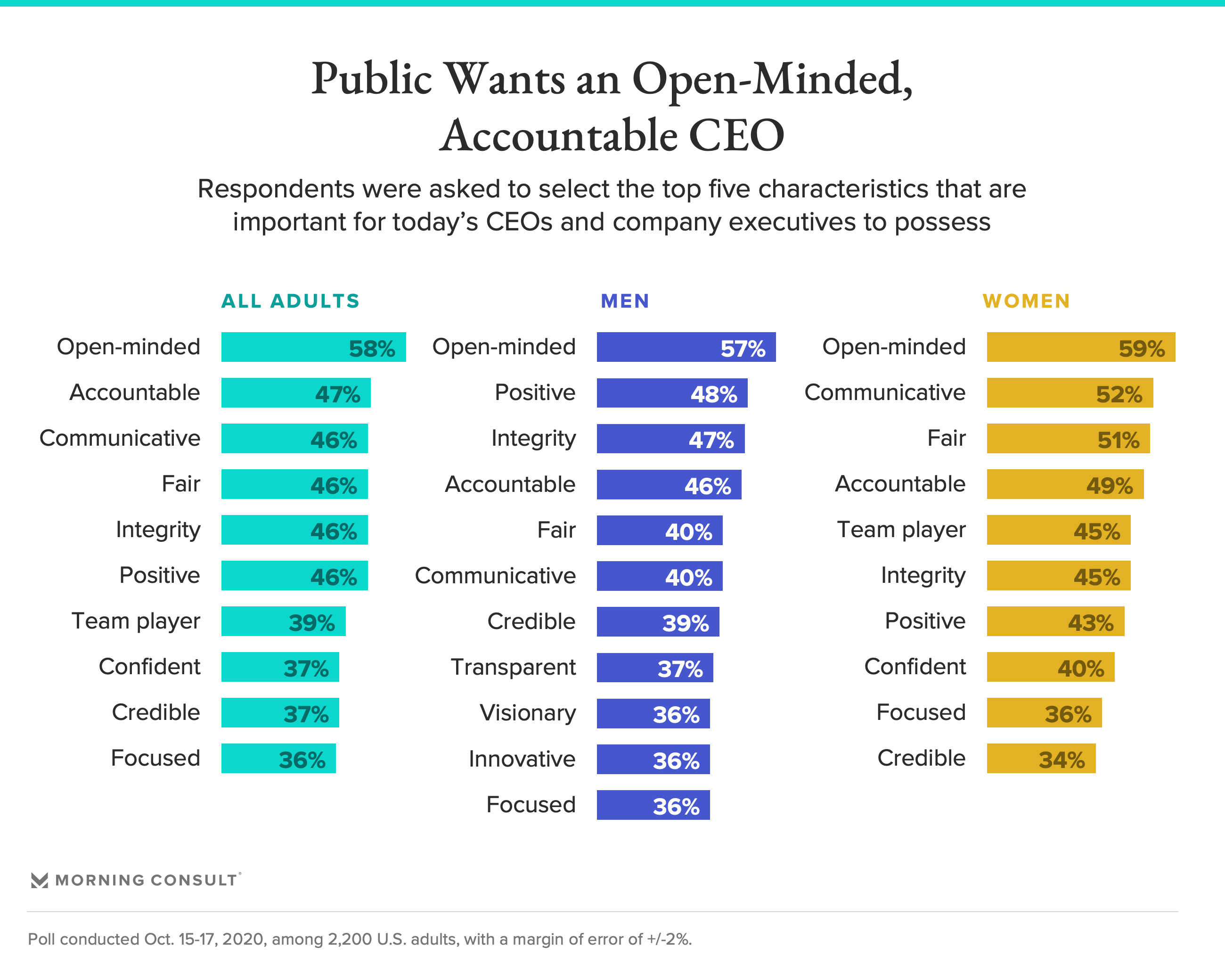 Respondents in the 2,200-person poll, which holds a margin of error of 2 percentage points, were more likely to attribute the list of 37 qualities to female leadership than male. 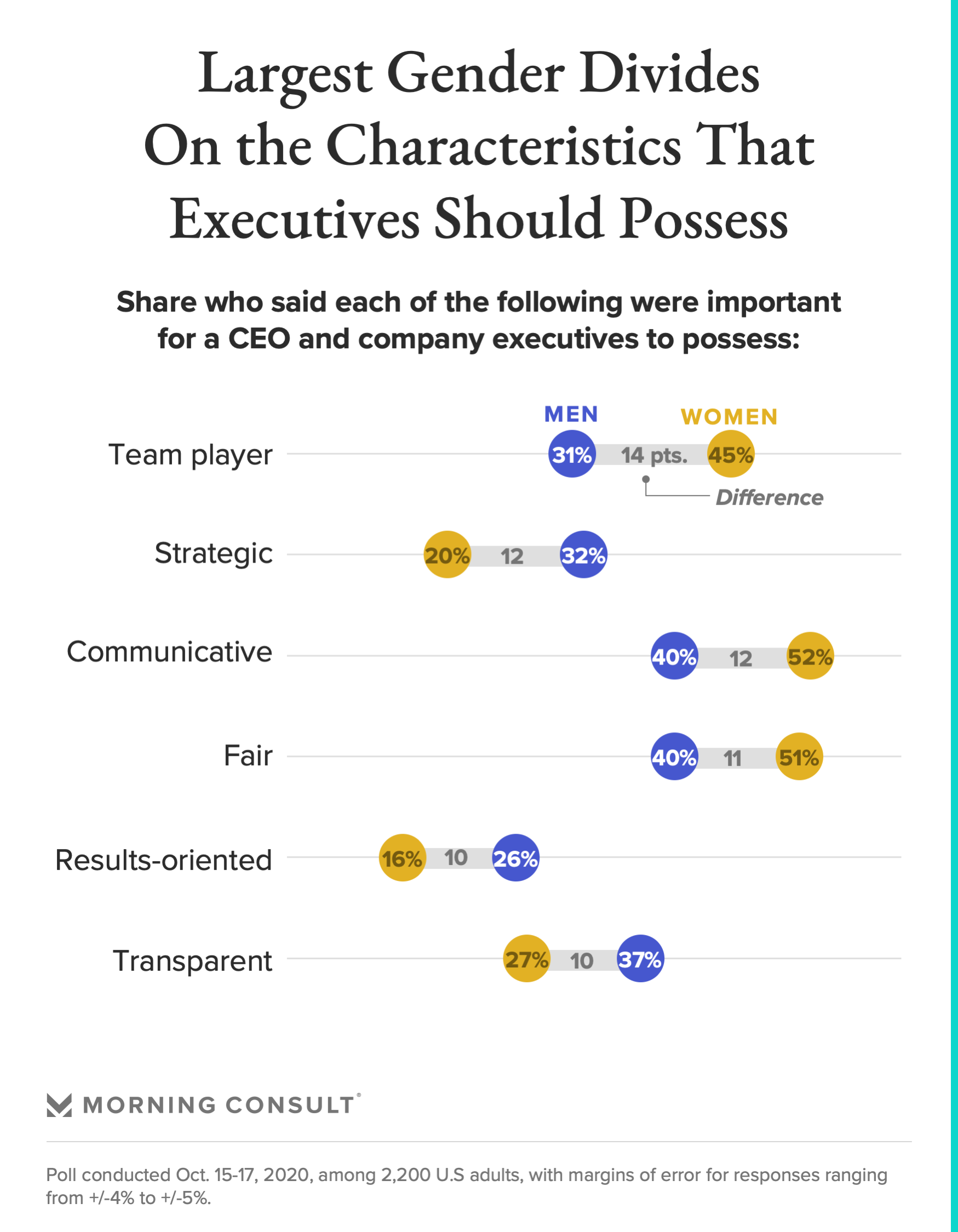 This tendency to ascribe gentler personality traits to women in business settings aligns with past research conducted on female executive leadership. A study published in September 2017 in the Strategic Management Journal found that firms that appoint a female CEO are more likely to “adopt a collaboration board chair orientation” because they view women as more conducive to this type of relationship compared to men.

Morning Consult compared how popular certain leadership traits were by how respondents gendered each characteristic. For example, transparency was the 12th most-cited characteristic that was desirable for leaders to have, and it’s a trait that is more commonly associated with how women lead (24 percent) compared with men (11 percent). 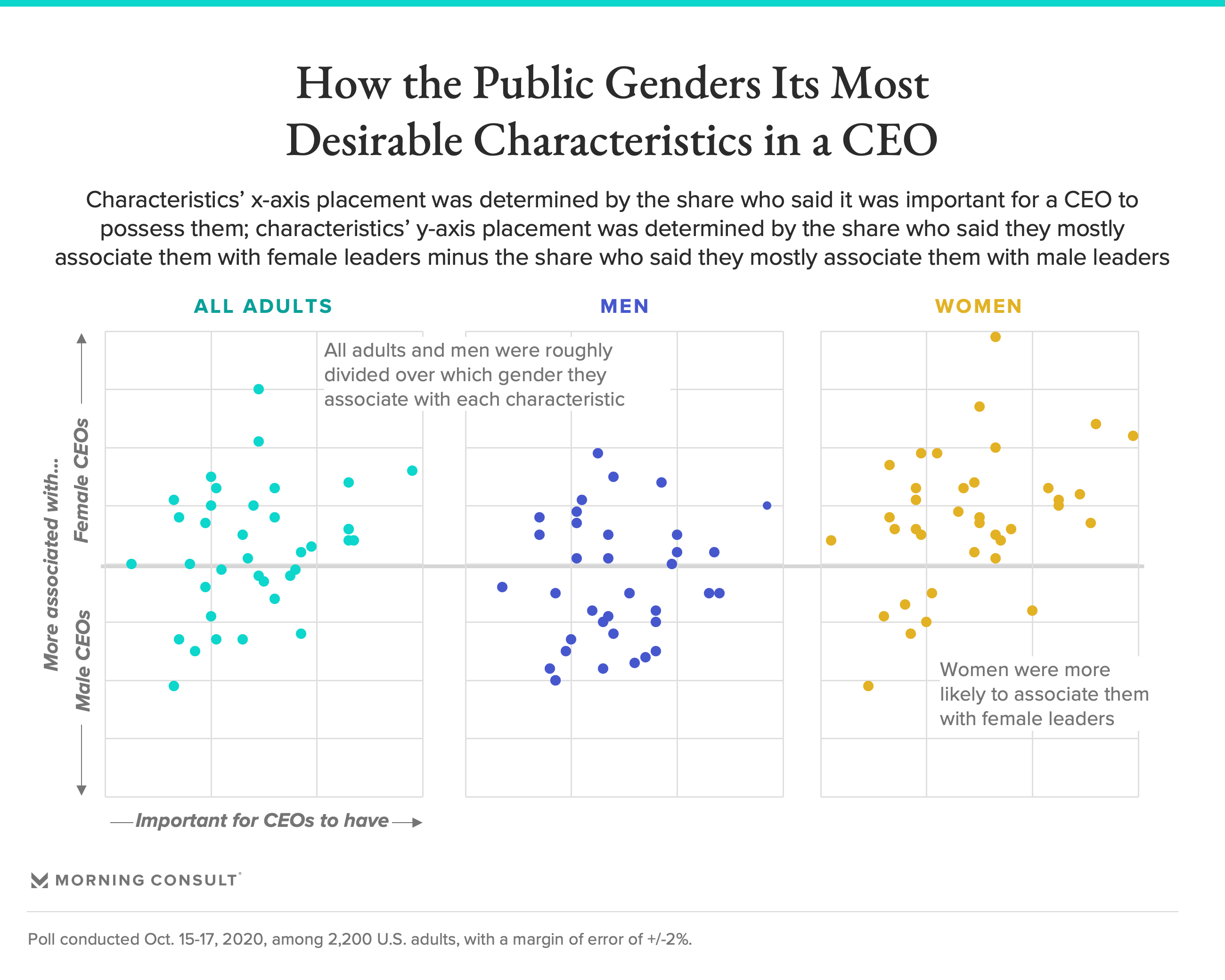 The data shows that women are ready to see themselves in top positions. Women overwhelmingly categorized their top leadership characteristics, such as “fair” and “integrity,” with female leaders, while men and the public overall were more of a mixed bag, according to Morning Consult analysis.

How COVID-19 has changed things

COVID-19 created unforeseeable obstacles for not just the average American worker but for those trying to lead them. According to the survey, those in the workforce are largely satisfied with the response of their CEO or management staff on a number of issues, such as helping workers adjust to remote working and navigating the global pandemic overall. 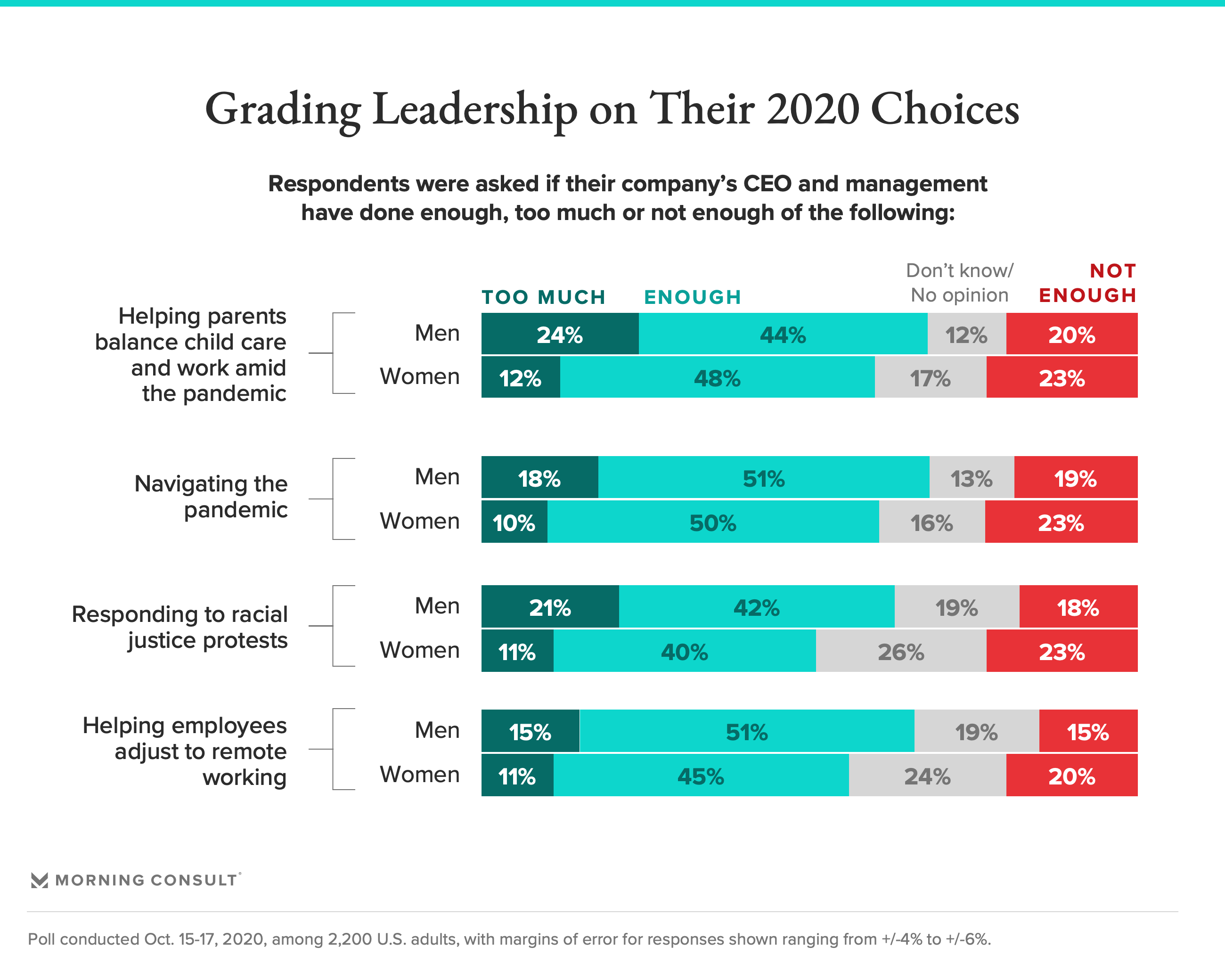 Corporations across the country are normalizing remote work, such as Facebook Inc., which is allowing thousands of employees to work from their homes permanently.

That said, notable gender divides emerged on a few questions. Men were twice as likely as women to say that CEOs are doing “too much” to help parents balance child care and work during the pandemic, a proportion that stays roughly true for how leaders have dealt with the pandemic overall.

View a PowerPoint presentation of these survey results, presented during the Nov. 16 webinar, “ASCEND 2020: Diversity and Inclusion & the Changing Values of Business Leadership.”