Republican senators are owning the high stakes of a potential Democratic Senate majority, while Ossoff and Warnock have separate approaches 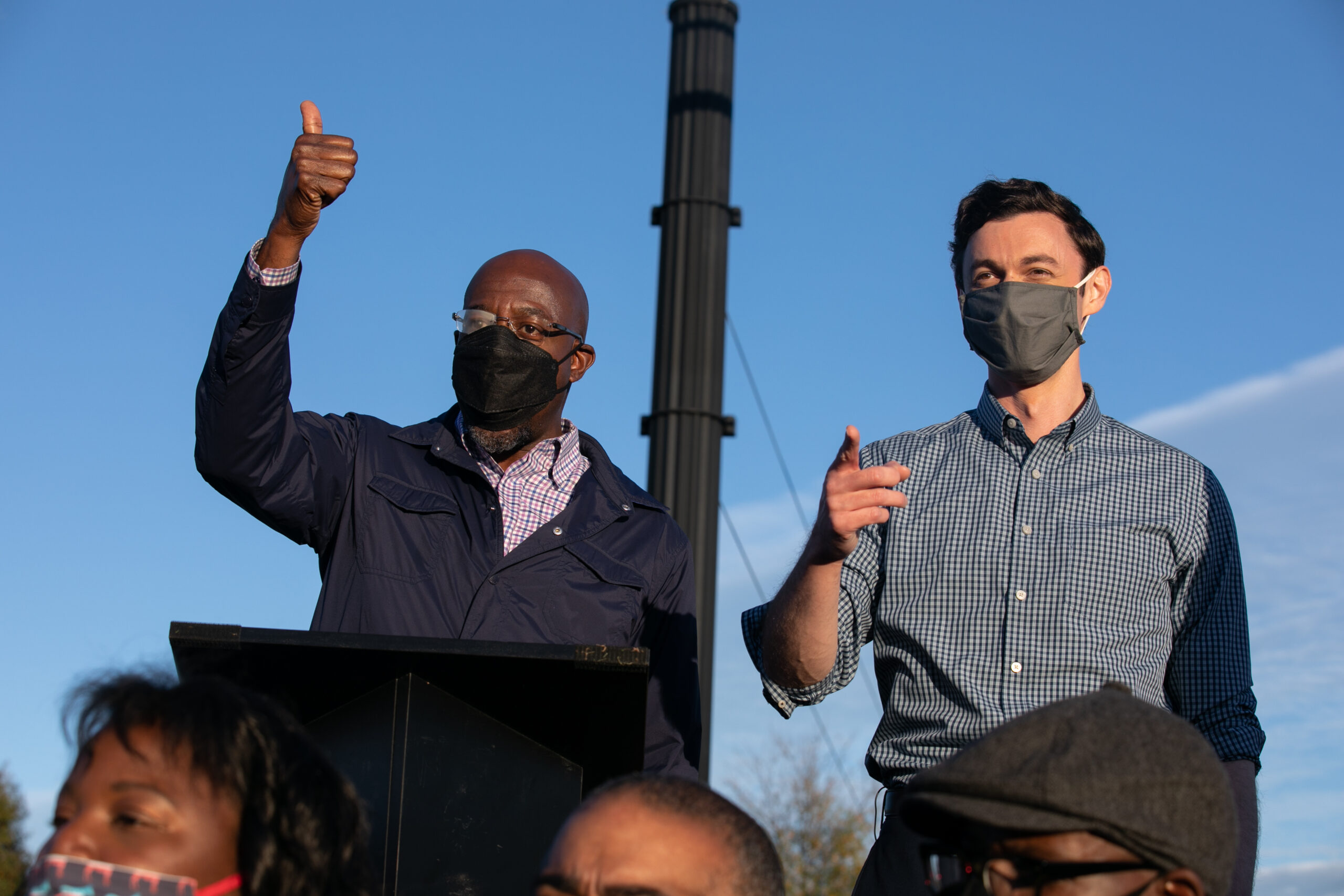 Democratic Senate candidates Jon Ossoff, right, and Raphael Warnock of Georgia hold a Sunday rally in Marietta, Ga. It was the first joint campaign event for the duo, who are taking more independent approaches to their races than Republican Sens. David Perdue and Kelly Loeffler, their respective opponents. (Jessica McGowan/Getty Images)
By Eli Yokley

This is the 12th in our “Majority Makers” series, a race-by-race look at the contests that will decide control of the Senate in 2021. See our previous dives on Georgia, Montana, Maine, Texas, Arizona, South Carolina, Colorado, North Carolina, Kansas, Michigan and Iowa.

The national implications of the January runoffs for the seats held by Republican Sens. David Perdue and Kelly Loeffler of Georgia are virtually unprecedented and clear: The outcome will decide whether President-elect Joe Biden arrives in Washington with a razor-thin Senate majority to help enact his agenda or a GOP-led chamber that could stymie it.

Perdue, Loeffler and their allies are emphasizing the fact that a Senate majority is on the line, driven by the belief that it will give them the upper hand on Jan. 5. But their respective Democratic opponents, Jon Ossoff and Raphael Warnock, have taken differing approaches to how they handle talk of their paired potential ascension in a state that proved purple this year for the first time in more than a decade.

Ossoff’s campaign is not shying away from the race’s gravity: During a recent campaign rally, the documentary filmmaker and former congressional staffer said Georgia will “decide the future of this republic” and “chart a course forward for this country.” He has repeatedly cast the contest as a crucial factor in Biden’s ability to deliver on his agenda when he takes office, arguing in a new television commercial that, unlike his opponent, he will work with the incoming president to tackle the pandemic and a damaged economy.

For Warnock, the messaging has been more subtle. While his campaign has used the national spotlight to raise money, the senior pastor at Atlanta’s Ebenezer Baptist Church tends to ignore the matter of Senate control in his pitch, focusing more on the kitchen-table impact on health care and wages and his own biography.

“As long as I’m centered on the concerns of Georgia families, which is the work I’ve done for years, the voters will continue to hear me and we’ll prevail come Jan. 5,” he said in a recent interview with MSNBC.

Though Ossoff and Warnock have lodged similar attacks against their respective Republican rivals, those different appeals to voters may help answer a key question facing the runoff, said former Columbus Mayor Teresa Tomlinson: Are the Democratic candidates “able to optimize each others’ voters?”

Tomlinson, a Democrat who lost to Ossoff in the Senate primary earlier this year, said Warnock has the ability to leverage his deep ties in political activism statewide, and particularly in the Black religious community, given his pastoral role. And she said Ossoff, who gained national prominence for his strong showing in the first competitive House special election of Donald Trump’s presidency, has helped to make inroads with voters in Atlanta’s growing suburbs — where Biden and the Democratic candidates performed well on Nov. 3, and where both Ossoff and Warnock remain popular ahead of the runoffs, according to a Nov. 8-9 survey conducted by Remington Research Group, a Republican firm.

On the other side, Republicans have aimed messages at both the party’s rural base and voters in those shifting suburbs, focusing strongly on what’s at stake in Washington. The pitch depends on acknowledging the reality that Trump will no longer be president come noon on Jan. 20, as well as getting voters who may have backed Democrats on Nov. 3 to believe that Biden’s party will succumb to its most liberal impulses.

Incoming National Republican Senate Committee Chairman Rick Scott (R-Fla.) has already begun airing a commercial in the state featuring a clip of Senate Minority Leader Chuck Schumer (D-N.Y.) — who would stand to effectively take control of the Senate if Ossoff and Warnock win — telling a crowd in New York, “we take Georgia, then we change America.”

It is on the airwaves alongside a new spot from Loeffler’s campaign that claims Warnock’s election “will give the radicals total control.” Perdue’s campaign has piggybacked on Loeffler’s attacks, calling Ossoff and Warnock running mates in one statement and saying “Georgians can’t trust either of them” in another. In an email, Perdue spokesman John Burke said Ossoff backs a “radical socialist agenda” and hopes to give “far-left Democrats complete control of our Senate.”

Warnock and Ossoff are presenting less of a package deal than their Republican rivals, though they have already joined hands on the runoff campaign trail and Ossoff has firmly aligned himself with the Atlanta pastor, telling Axios in a recent interview they’re running as a “team.” His spokeswoman, Miryam Lipper, said the attacks on socialism did not work when Ossoff appeared on the ballot in November.

“They can spend all the money they want to try their failed strategy again, but Georgians know the difference between these lies and the hard fact that their senators downplayed the coronavirus pandemic while lining their pockets, and have no plan to help unify the country and lead us forward out of this crisis,” she said.

Runoffs are not about persuasion, they’re about turnout. It’s not, ‘Let’s see who has the best ideas on health care.’

But in the runoff, the question of whether Ossoff and Warnock are indeed radical or untrustworthy is beside the point for Republicans. Jay Williams, a GOP strategist in the state, said the fear of giving Democrats total control of the legislative and executive branches of government is enough to motivate his party’s base to show up. The November showing for Biden, he said, was more about “animosity toward Trump to get him out than a belief” in the Democratic agenda, citing Ossoff’s underperformance compared to the top of the ticket in the head-to-head Senate race.

“Runoffs are not about persuasion, they’re about turnout,” he said. “It’s not, ‘Let’s see who has the best ideas on health care.’”

But Williams, whose work focuses on engaging voters online and by mail, said Republicans do face at least two hurdles: First, “it’s better for everybody to know now” if Trump is not going to be president “because it’s going to actually impact things.” Second, the early trajectory of Biden’s presidency as evidenced by the transition could make it harder to argue that the Democrats are radical, depending on his decisions.

At this early stage, two state polls — the Remington survey and another on behalf of Fox 5 Atlanta — show tight contests for both seats. Sean McElwee, a progressive pollster and activist, said Trump’s shadow over the race but absence from the ballot makes Republican enthusiasm something of an unknown, but Democrats still are in “uphill territory” given the perceptions of the national party in a state where the presidential contest was so close.

“It seems very clear to me that the party who benefits least from geography has the most to gain from de-nationalizing politics,” he said.