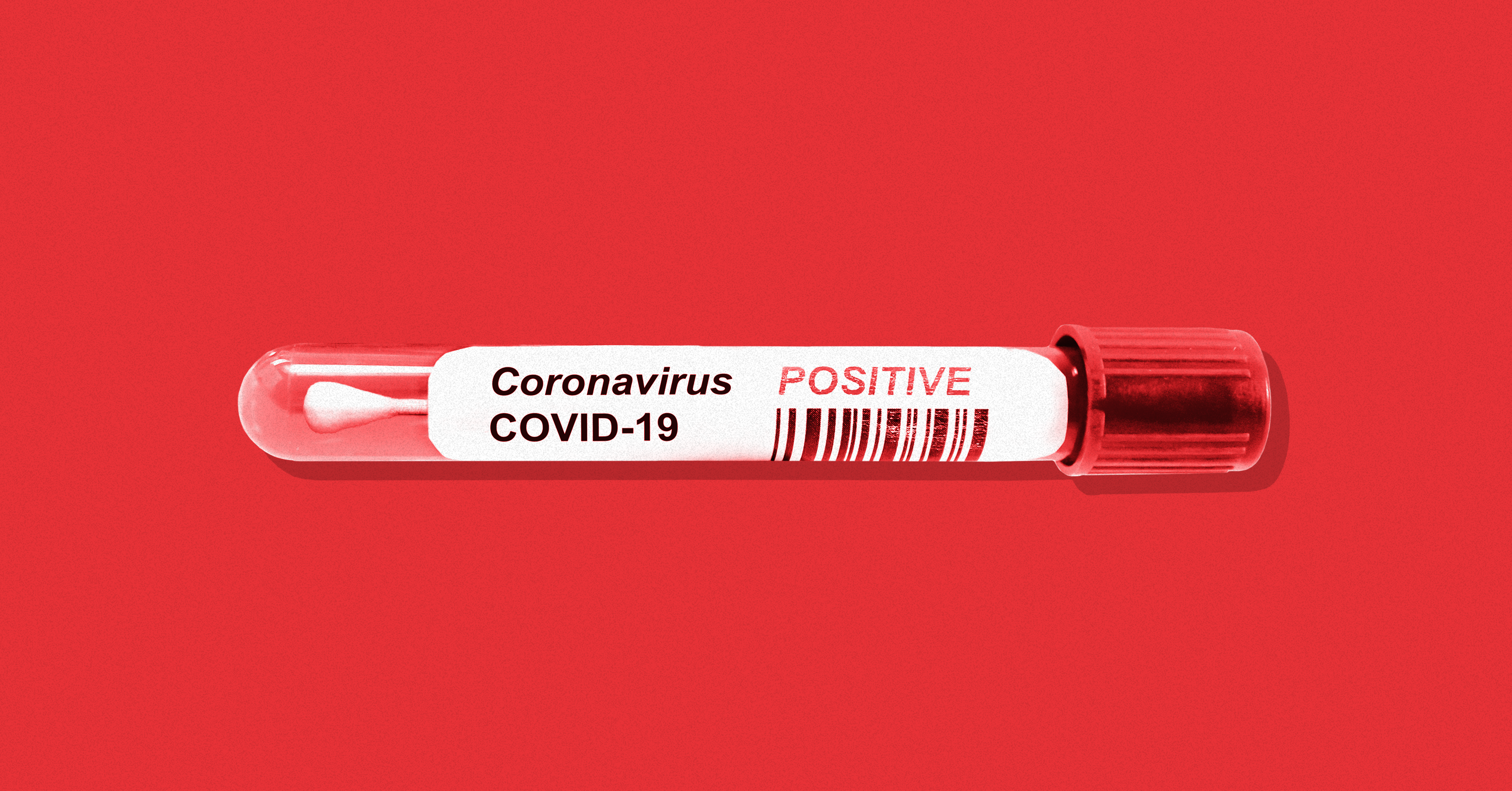 Hispanics are more likely than non-Hispanic white adults and adults overall to say someone close to them has been affected by COVID-19 but about as likely to say they’ve suffered financially, according to new Morning Consult polling.

Public health researchers said that while the diversity of Hispanic communities means there’s wide variation in their experiences during the pandemic, the findings track with other data that shows Latinos have been disproportionately affected by the virus. Since the survey was conducted Oct. 14-19, coronavirus cases have surged nationwide, and using data as of Nov. 10, the APM Research Lab estimates that Latinos, who make up about 19 percent of the U.S. population, are three times as likely as whites to die of COVID-19, despite being generally healthier on average.

“Not all Latinos in the United States are experiencing the pandemic the same way,” said Dr. Carlos Rodríguez-Díaz, a Latino health researcher at George Washington University. “There are clear differences among Spanish-speaking versus English-speaking Latinos, particularly in the Northeast and the Midwest.”

Data from the Centers for Disease Control and Prevention indicates that the share of U.S. COVID-19 deaths that were among Latinos was 26.4 percent in August, up from 16.3 percent in May, and that Latinos were the only group to see an increase in that period.

Hispanics were also more likely to say they are concerned about COVID-19 than adults overall, by a 7-point margin. 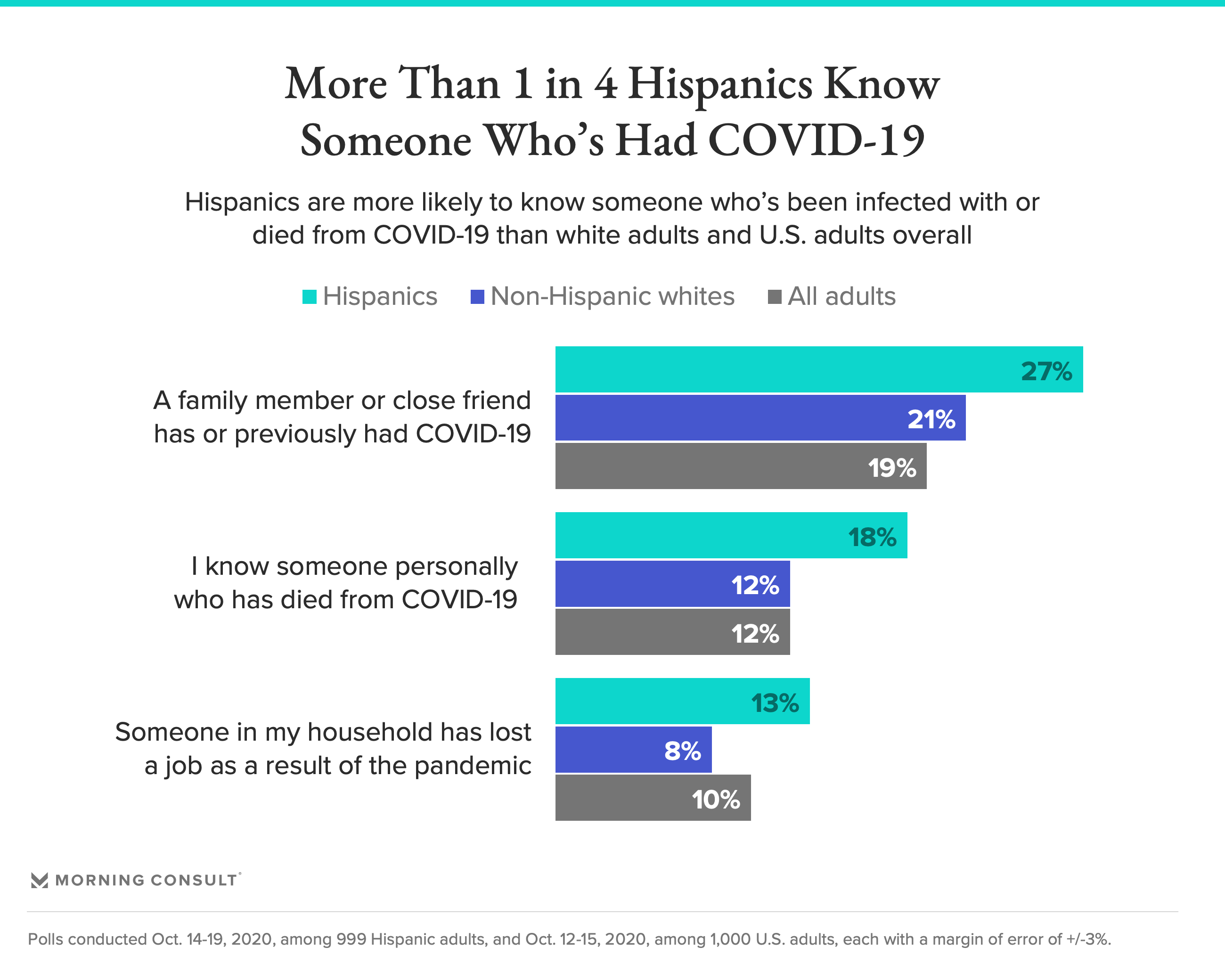 Dr. David Hayes-Bautista, director of the Center for the Study of Latino Health and Culture at UCLA’s medical school, said that despite the greater COVID-19 burden among Latinos, they also tend to have larger social networks, so there may be more degrees of separation between the person who got sick and the person who said they know them.

Meanwhile, 13 percent of Hispanics said someone in their household has lost a job because of the pandemic, and 41 percent said their personal financial situation has gotten worse, roughly on par with the rates among adults overall.

Even so, the economic impact may be worse for Latinos, who had a median household income of $56,113 in 2019, compared with a national median of $68,703, federal data shows. And despite the high U.S. unemployment rate, many Latinos never stopped working when bars, restaurants and schools closed this spring, Rodríguez-Díaz said, likely putting many workers at higher risk of contracting COVID-19 while on the job.

“The bottom line is that a lot of the essential work is done by Hispanics,” said Dr. Jane Delgado, president and chief executive of the National Alliance for Hispanic Health. “We also have larger families, and because of limited resources, the idea of social distancing may not be feasible” in some communities.

Hayes-Bautista said those findings were generally unsurprising given Latino households tend to spend less on health care than white households, and because they were already more likely to be uninsured before the pandemic. In the surveys, Hispanics, non-Hispanic whites and adults overall were equally likely to say they didn’t have health insurance to lose, at 15 percent each.

Even so, Rodríguez-Díaz noted that access to care for Latinos varies wildly across the country because “we don’t have a system that has been built to be culturally congruent to different groups, including Latinos.”

The poll also underscores the persistent problem of missing race and ethnicity information in COVID-19 infection and death data, Delgado said, as well as the importance of analyzing differences between immigrants and U.S.-born Latinos. While the survey asked about respondents’ families’ countries of origin and what language they spoke at home, sample sizes were too small to draw conclusions.

Immigrants in the country illegally may also be less likely to respond to a poll, Rodríguez-Díaz said.

“Aggregate data sort of misses the nuances, and it’s the nuances that drive the individual,” Delgado said. “You can average it out, but it’s not going to tell you about the person sitting in front of you.”