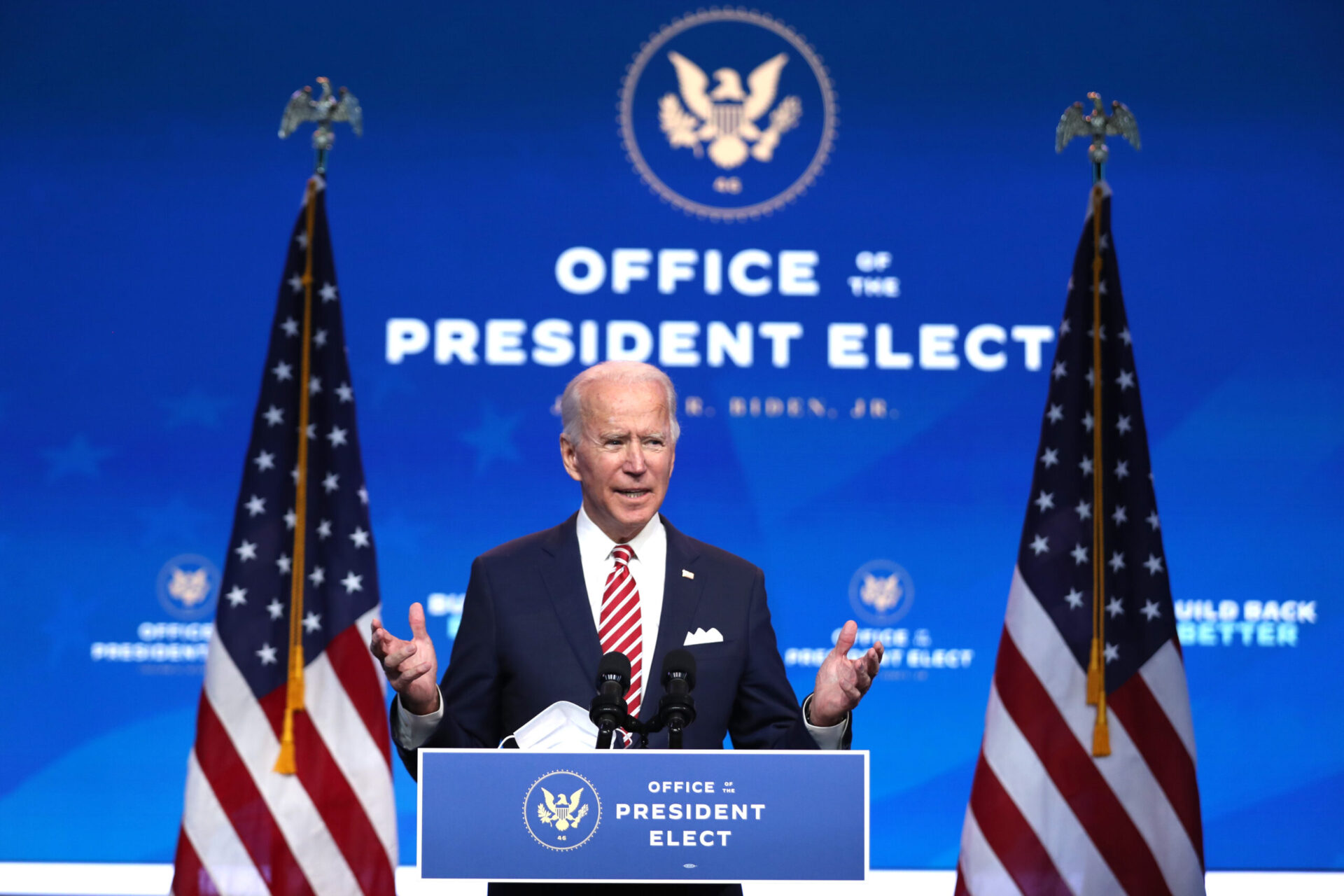 President-elect Joe Biden delivers remarks about the U.S. economy during a Monday news briefing at the Queen Theater in Wilmington, Del. Sixty percent of voters approve of how Biden's handling the transition, according to a new poll. (Joe Raedle/Getty Images)
By Eli Yokley

President-elect Joe Biden’s transition efforts have been hobbled as a result of President Donald Trump’s refusal to concede and the administration’s subsequent resistance to helping the Democrat prepare to enter the White House in January. But most voters feel good about the way America’s incoming leader is maneuvering the major task of setting up his pending presidency.

According to a new Morning Consult/Politico poll, 60 percent of voters said they approve of Biden’s handling of the transition, while 28 percent disapprove. Biden’s transition handling is backed by 91 percent of Democrats and 53 percent of independents, but opposed by 59 percent of GOP voters. 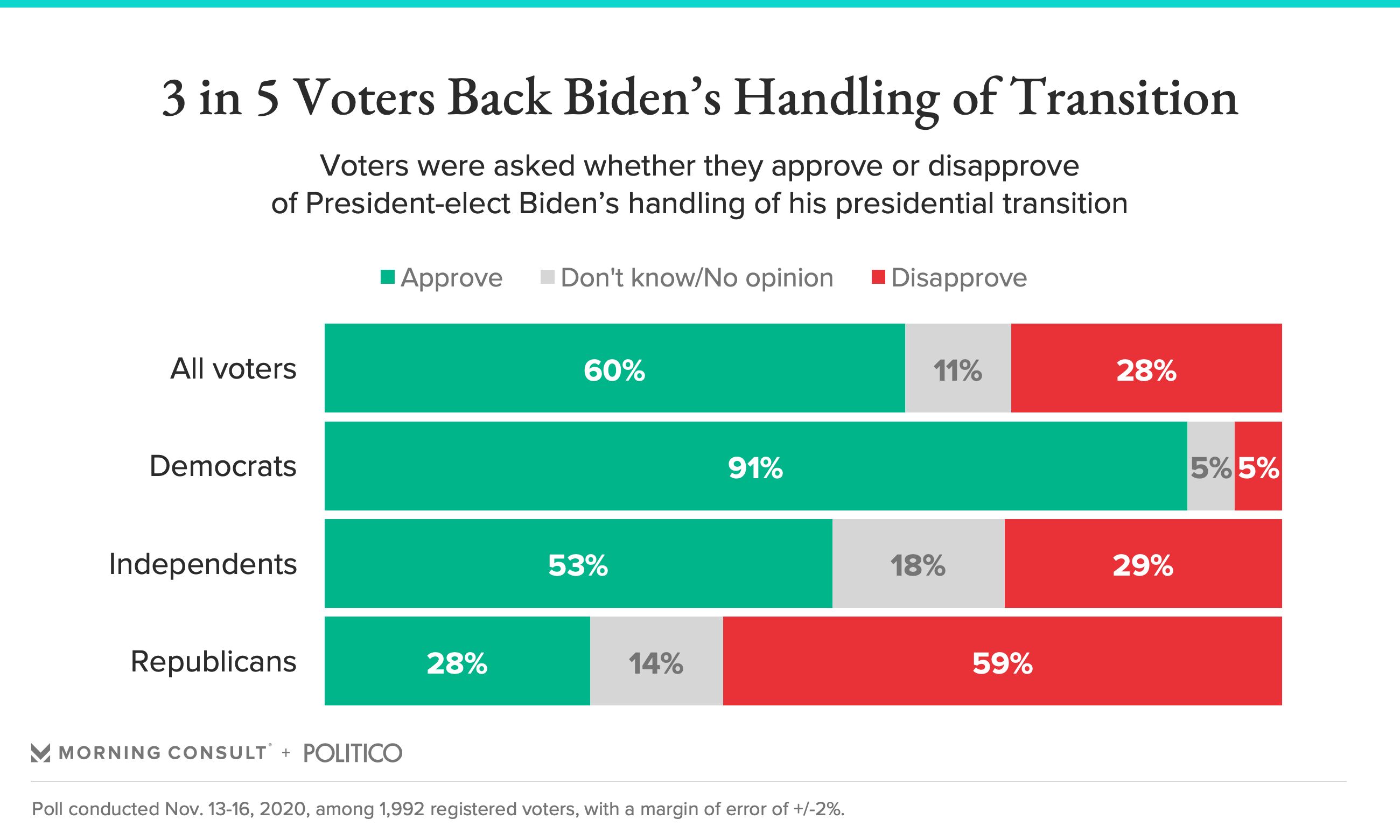 Overall, 41 percent of voters strongly approve of Biden’s transition handling, compared with 21 percent who strongly disapprove. The Nov. 13-16 survey of 1,992 registered voters has a margin of error of 2 percentage points.

The poll was conducted days after Biden declared victory and issued a unity call for the nation to “put the anger and the harsh rhetoric behind us,” and named a White House chief of staff, key transition officials and members of a coronavirus pandemic task group. Over the same time period, Trump and his allies waged a public-relations and legal campaign challenging Biden’s victory — called by all major media outlets on Nov. 7 — as the federal government’s General Services Administration withheld resources meant to facilitate the transition of power.

Sixty-two percent of voters said they’d seen, read or heard “a lot” about Trump’s refusal to concede his loss — making it one of the most salient news events of an eventful year, according to Morning Consult polling. That appears to be affecting views of the incumbent’s handling of the presidential transition. 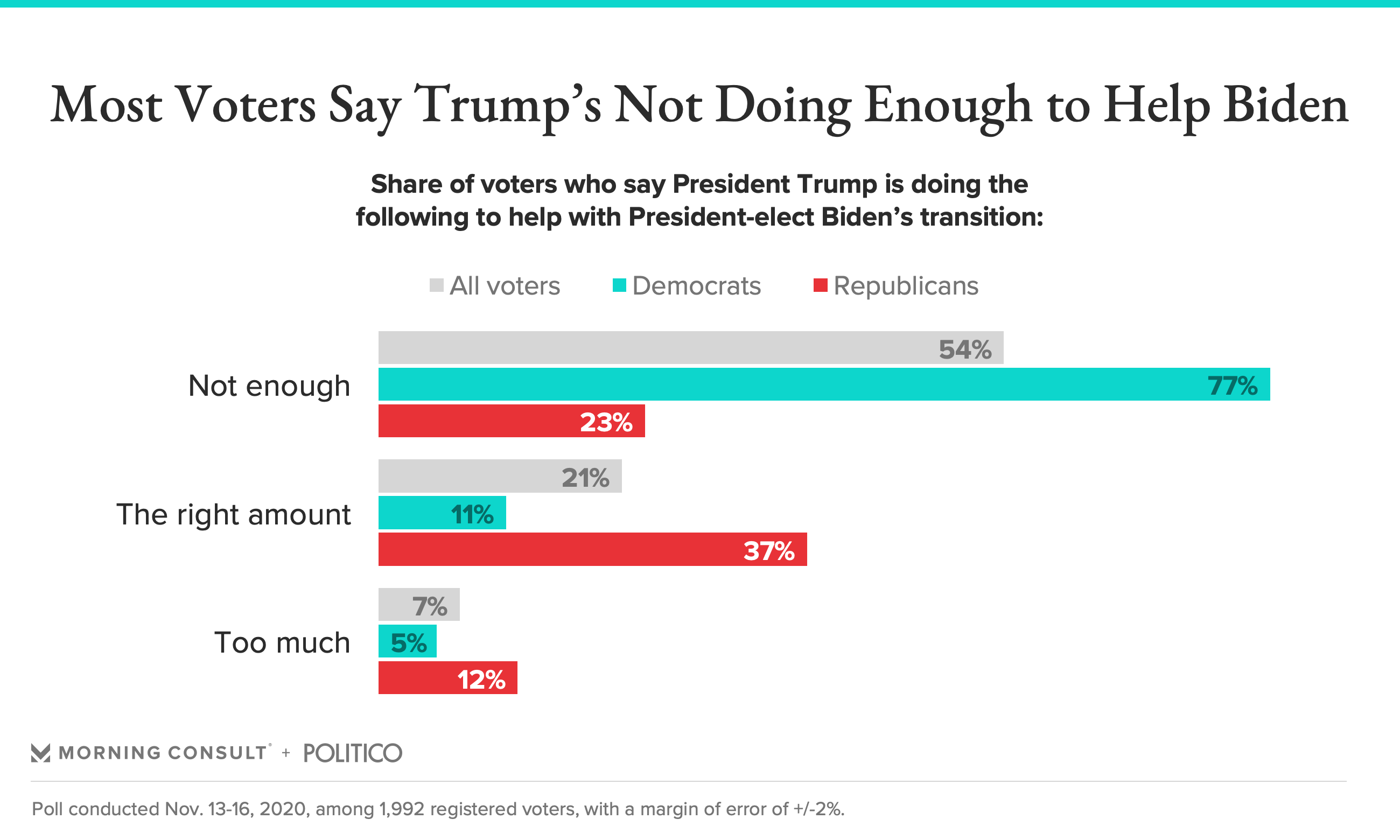 Fifty-four percent of voters said Trump is not doing enough to help Biden, including 77 percent of Democrats and 23 percent of Republicans, though a plurality of Republicans (37 percent) said the current president is “doing the right amount” to assist his successor. More than a quarter (28 percent) of GOP voters said they didn’t know or had no opinion — 10 points higher than the share of all voters who said the same.

Along with making it impossible for Biden to use official channels to communicate with foreign leaders and get a handle on the current state of affairs in a wide range of government agencies, experts have warned that the administration’s refusal to acknowledge defeat could make it more difficult for the president-elect to hit the ground running on a response to the pandemic — the top priority for voters in Biden’s first 100 days in office. 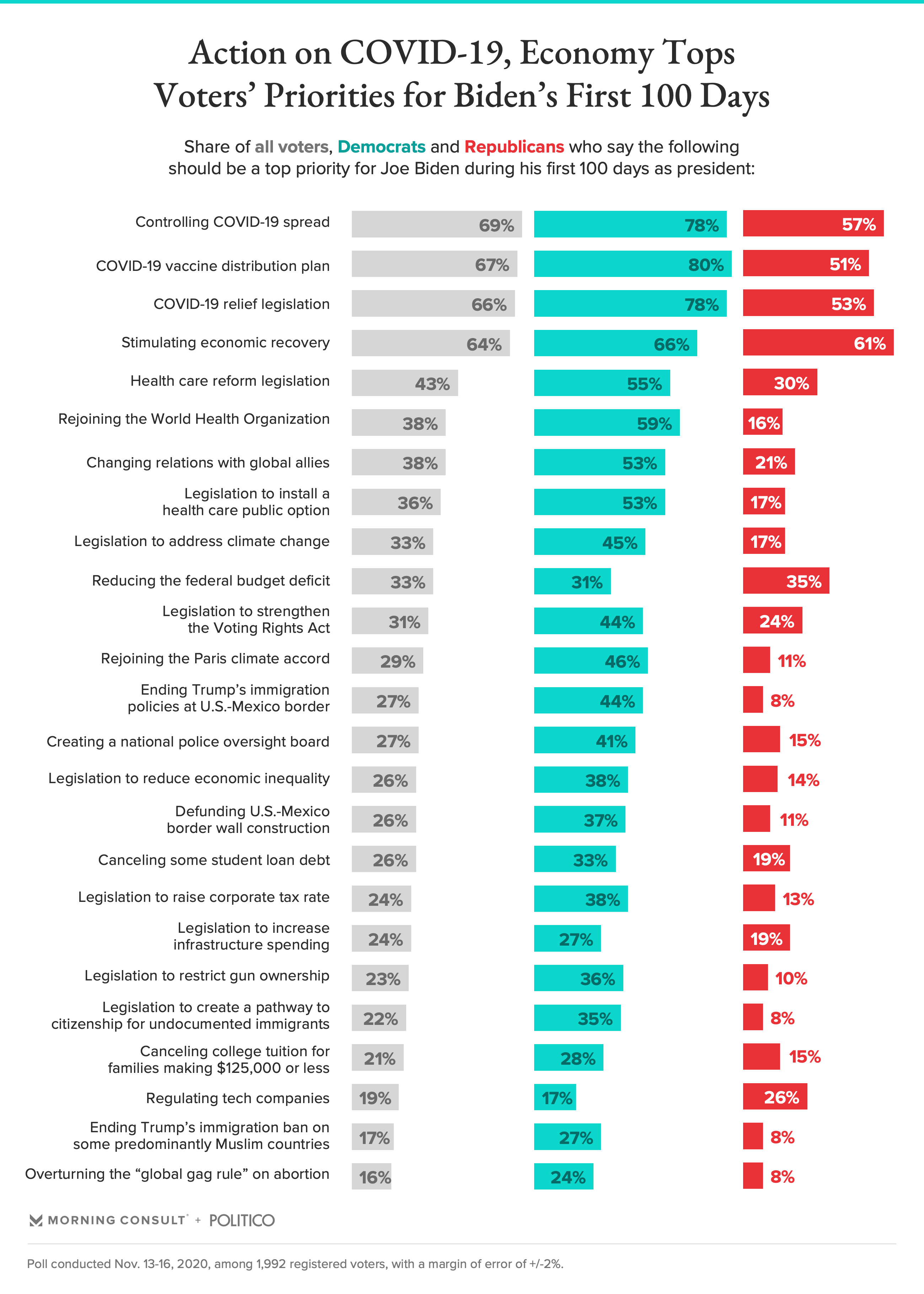 Among 25 potential early priorities for the incoming president, all voters, including top shares of Democrats and Republicans, were most likely to cite potential actions against the coronavirus — controlling its spread, installing a plan for distribution of any forthcoming vaccine, passing an aid package and advancing an economic recovery — as a “top priority” for a nascent Biden administration.

Other issues, such as a new approach to relationships with foreign allies or addressing climate change, rank near the middle of voters’ lists of top priorities, while immigration initiatives, such as legislation to create a pathway to citizenship for undocumented immigrants and the lifting of entry restrictions on people from some Muslim-majority countries, rank at or near the bottom.