Asian Americans Are Less Likely Than Public Overall to Know Someone With COVID-19. Their Mental Health Has Suffered Just the Same 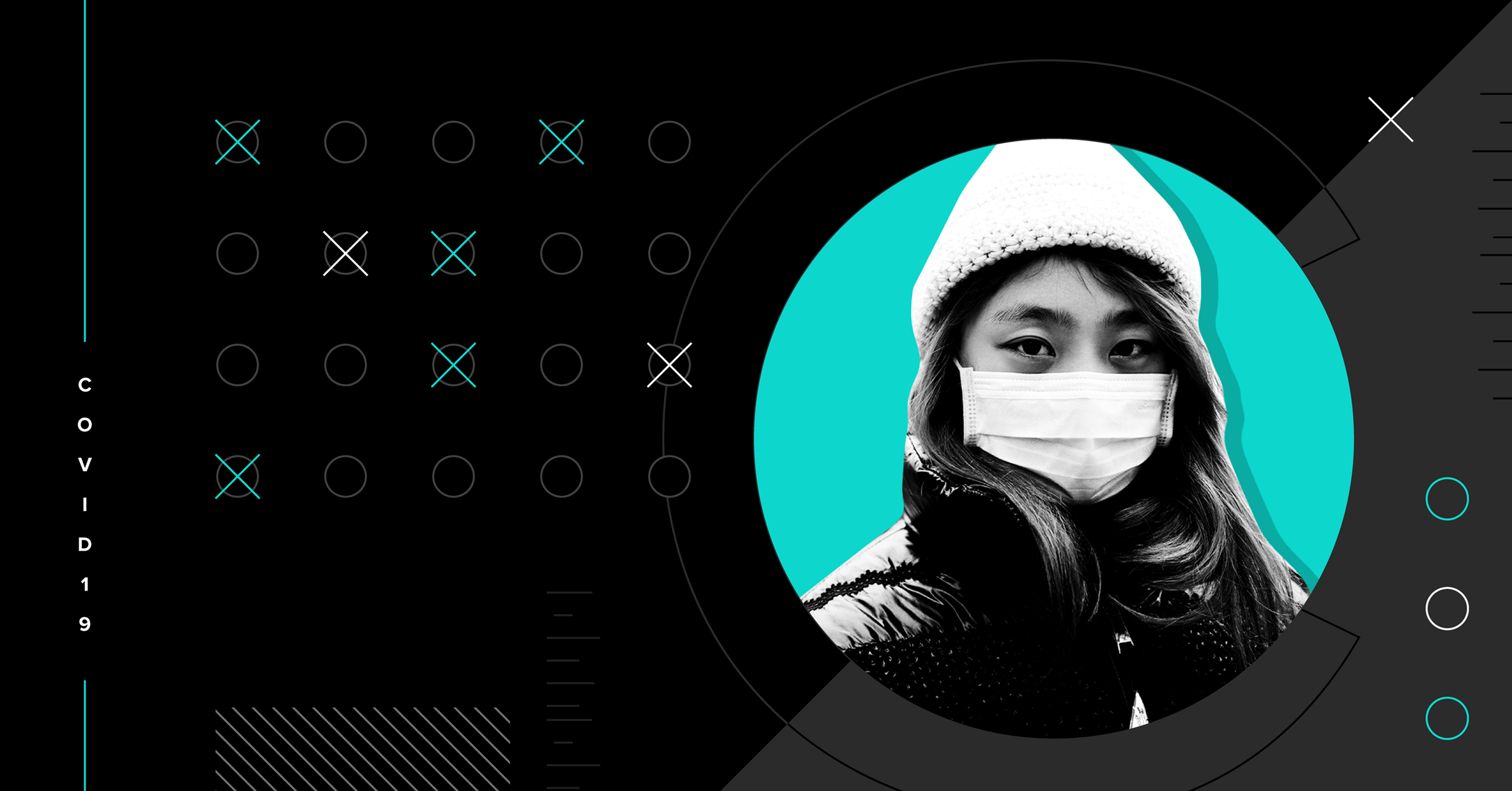 The data in this article is drawn from a poll of 1,000 Asian adults, gauging attitudes on a variety of social, political and economic issues.

More than a third of Asian Americans say their mental health has worsened during the pandemic, according to a new Morning Consult survey that indicates they are also significantly more likely than whites and adults overall to say they’re worried about COVID-19. 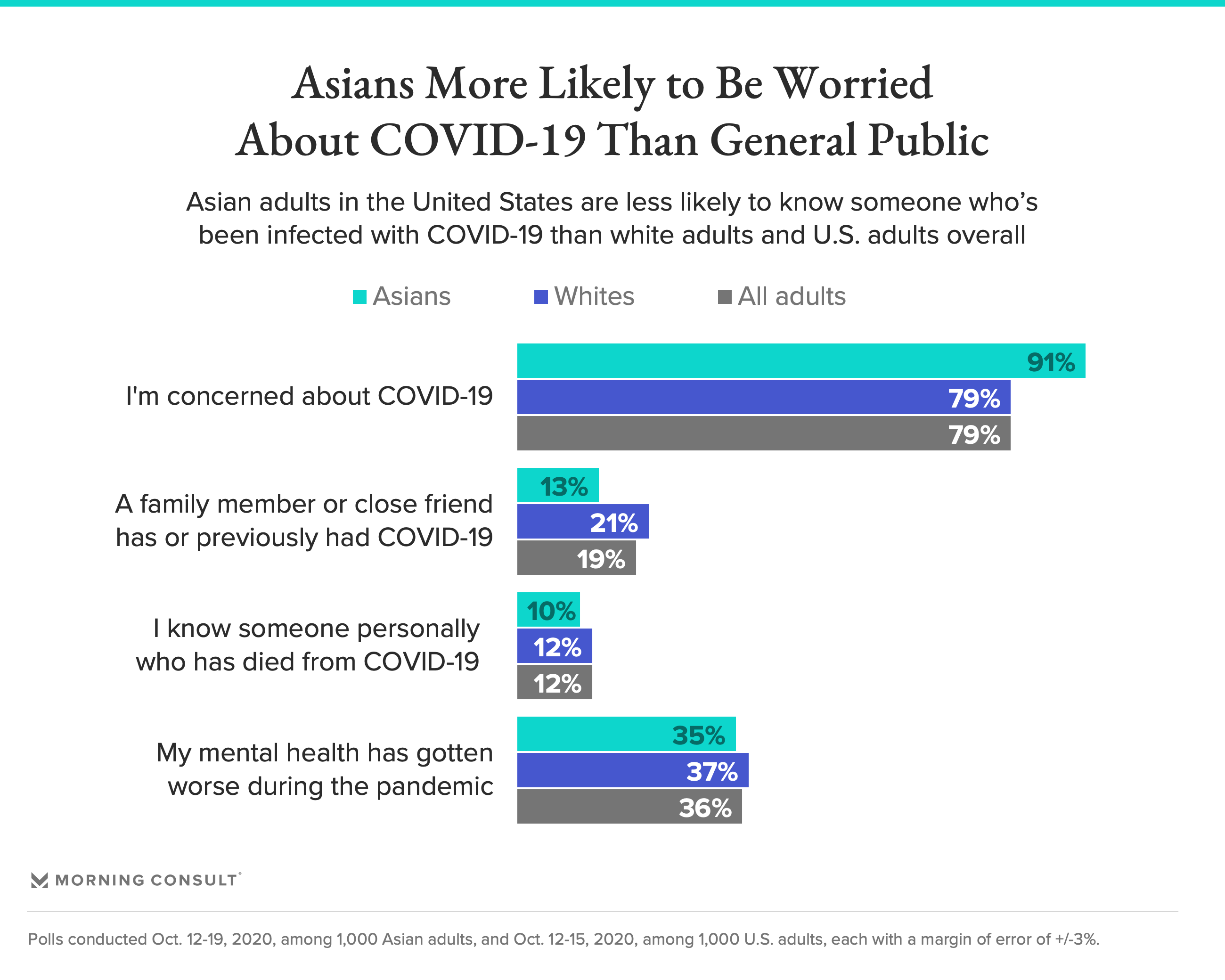 Overall, the surveys indicate that despite Asian Americans seeing a lower COVID-19 death rate than other racial and ethnic groups, these communities have been hit hard during the pandemic, according to health researchers, advocates and providers who highlighted the diversity of Asian communities in the United States and said despite some similar survey numbers, the driving forces of their health experiences may be vastly different from other groups.

For example, the share of adults who said their mental health has worsened during the pandemic was similar among Asian Americans, whites and adults overall, at around 35 percent. But for Asian Americans, mental health issues “tend to be under-diagnosed and under-discussed,” said Dr. Tung Nguyen, a professor of medicine at University of California, San Francisco, and director of the Asian American Research Center on Health.

“When you get a number where they look like the rest of the population, it actually makes me think that it’s a bigger problem than you’d think,” he said.

An uptick in anti-Asian racism could also be contributing to the increase in mental health issues during the pandemic, Nguyen said, fueled both by “federal messaging” and “some latent anti-Asian racism from before the COVID pandemic.”

Related: The Pandemic Has Hit Closer to Home for Hispanics Compared to the General Public

President Donald Trump’s repeated framing of the coronavirus as the “China virus,” the “Chinese virus” or the “kung flu” has, for example, prompted many people in the United States to blame Chinese Americans for the pandemic, according to an analysis from The Washington Post. Between March 19 and Oct. 7, there were 2,738 incidents of discrimination against Asian Americans and Pacific Islanders reported to Stop AAPI Hate, a group that launched early in the pandemic to document racism.

And people with family, friends or business connections overseas may also have a more nuanced view of how other countries have responded to the pandemic and how the United States has fallen short, said Juliet Choi, chief executive of the advocacy group Asian & Pacific Islander American Health Forum.

“A lot of us, our families still have close ties to countries in Asia,” Choi said, noting success in managing the virus in Taiwan and South Korea. “In those countries, the government plays such a big role. So I do think that’s influencing our psyche here in terms of COVID.”

The coronavirus has affected Asian Americans’ health in other ways, as well, though they were less likely than adults overall to say they’ve lost or did not have health coverage (17 percent to 25 percent) and about as likely to say they’ve delayed health care (32 percent to 35 percent) during the pandemic.

Some of the survey results may also be underestimates, advocates said, given the poll was conducted in English only and 34 percent of Asian Americans have limited proficiency in the language. Asians who don’t speak English well are less likely to have a regular checkup and more likely to report unmet health care needs and communication problems in medical settings.

“My primary hypothesis is things are just that much worse among those who don’t speak English well,” Nguyen said, particularly among older adults.

Other data suggests the pandemic’s toll on Asians has been underreported. Through July, for example, Asian Americans saw a level of excess deaths that was 35 percent higher than average over the past five years despite a death toll that was lower compared to other groups, according to an analysis from The Associated Press and The Marshall Project.

Choi noted that Asian Americans are overrepresented in the health care workforce and in the food supply chain industry, potentially putting them at higher risk of exposure to the virus. Asian-owned businesses are also overrepresented in sectors affected by the pandemic, including accommodations and food service, retail and education services.

And complicating the picture early on in the pandemic, “our community was not coming in to be tested,” said Dr. Kimberly Chang, a family medicine physician at Asian Health Services, a community health center in Oakland, Calif. “Particularly because of language access issues, the fear around getting sick and coming to the clinic” and “the rhetoric” against Asian Americans.

Even with these limitations, Nguyen said he thinks the survey may be among the largest examinations yet of Asian Americans’ health experiences during COVID-19. And Choi said it underscores the importance of gathering more granular data to fully understand how the COVID-19 pandemic is affecting a broad swath of Asian communities across the country.

“Our community is so diverse,” Choi said. “If folks are not collecting the data about our communities, at the federal, state and local levels, it is really hard to determine how we’re faring.”