12% of respondents want increased representation across all genres 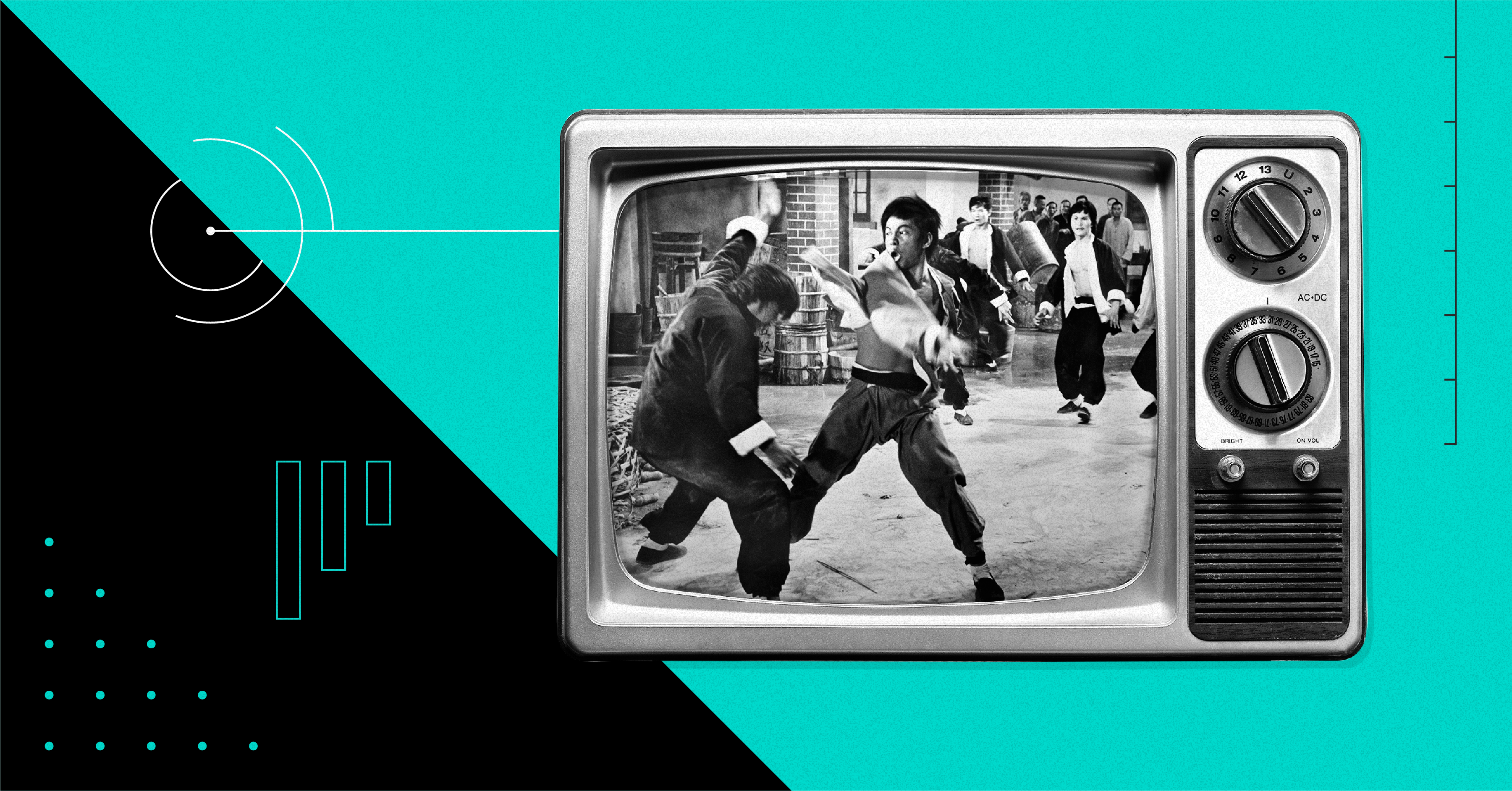 A new Morning Consult poll found that 31 percent of U.S. adults who identify as Asian said they would like to see increased representation in action or adventure films. (Getty Images / Morning Consult Illustration by Sara Wickersham)
By Sarah Shevenock

Try to remember the last Asian character you saw in a movie. Were they wearing glasses or acting timid? Speaking with an exaggerated accent? Were they doing karate?

It’s true there have been some watershed moments for Asian representation on the big screen in recent years. August 2018 was heralded as “Asian August” due to the success of films such as “Crazy Rich Asians” and Netflix Inc.’s “To All the Boys I’ve Loved Before,” and in 2020, “Parasite” took home Best Picture at the Academy Awards. But U.S. films are still more likely to cast Asians in stereotypical ways, if at all. And as more Asian stories make their way to the big screen, new Morning Consult data shows which representations Asian-American audiences want eliminated. 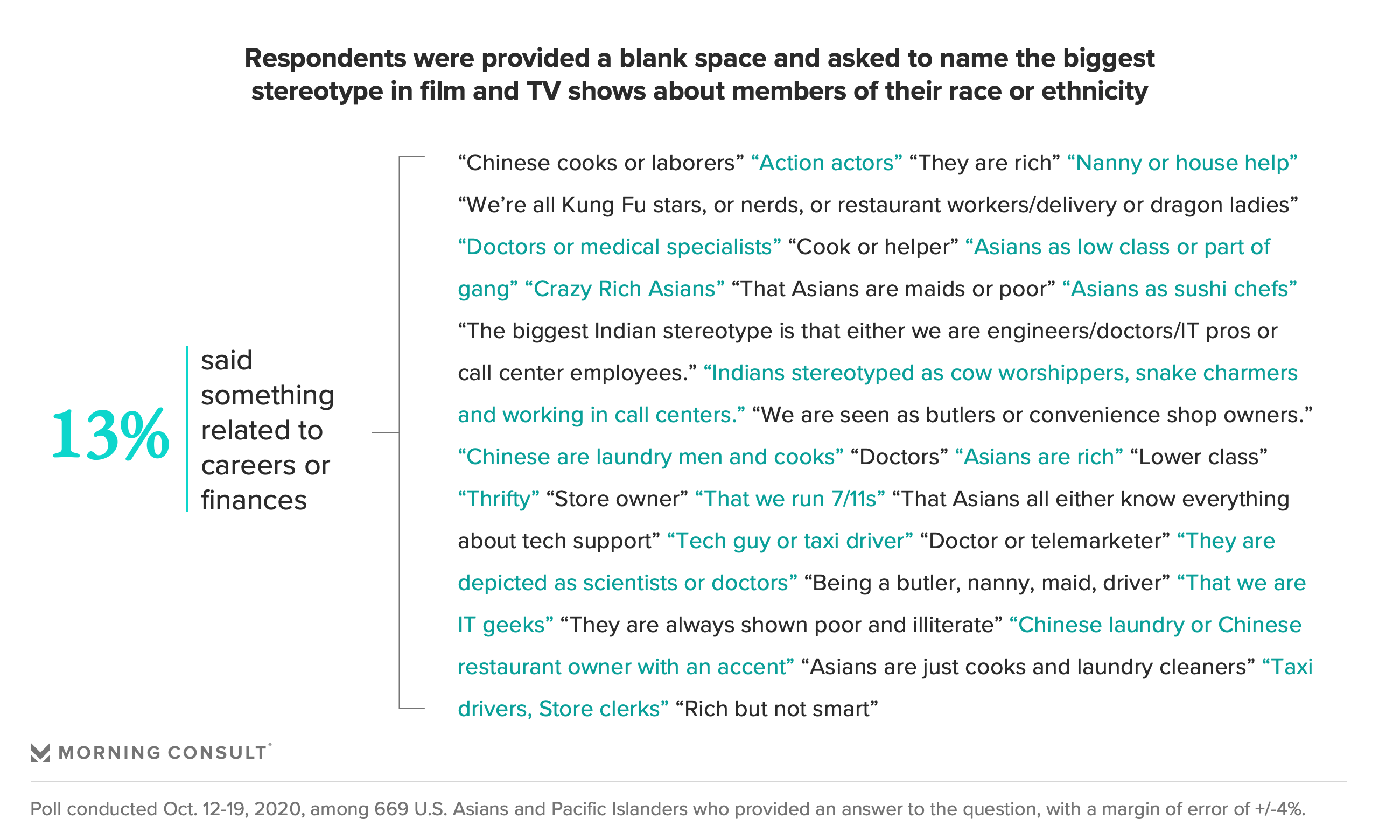 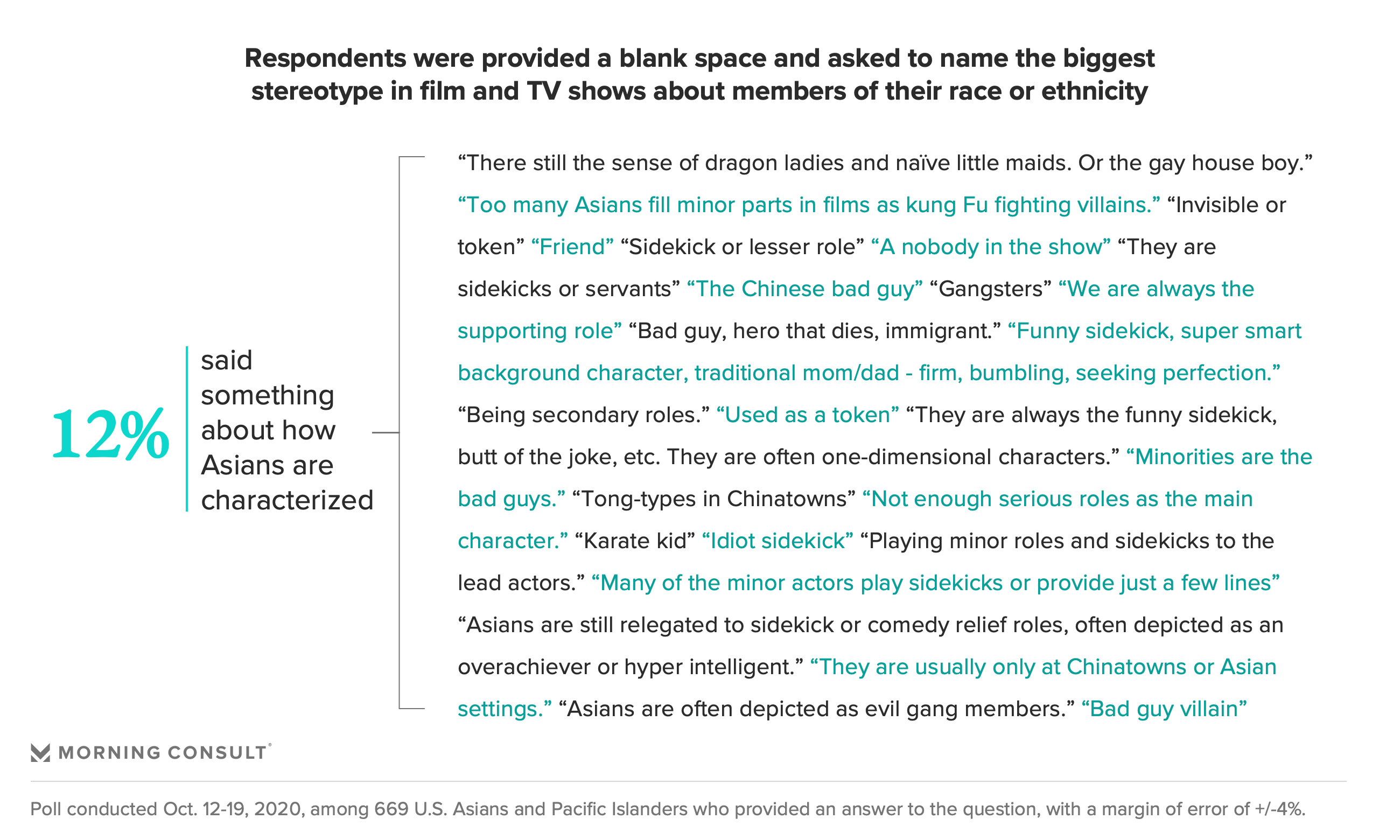 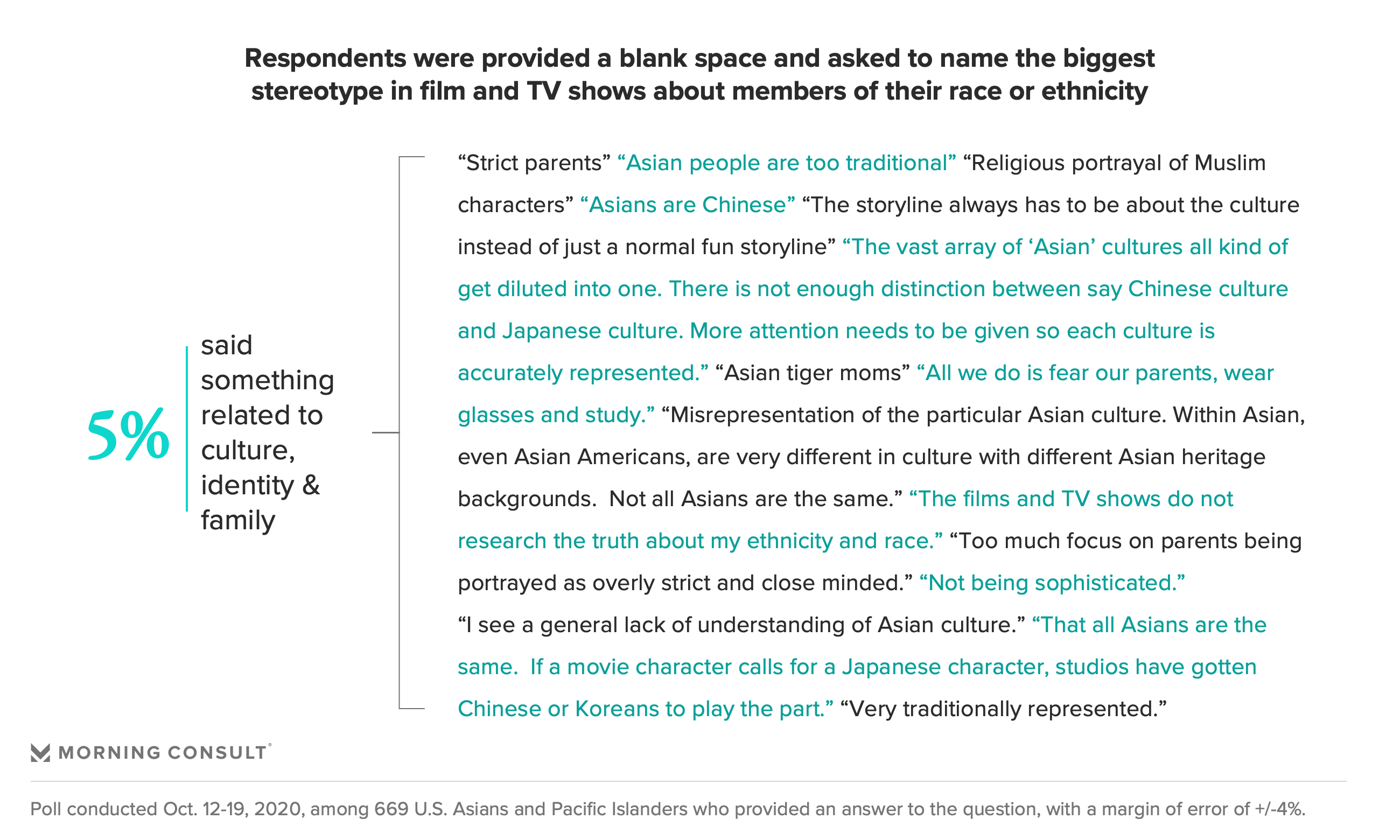 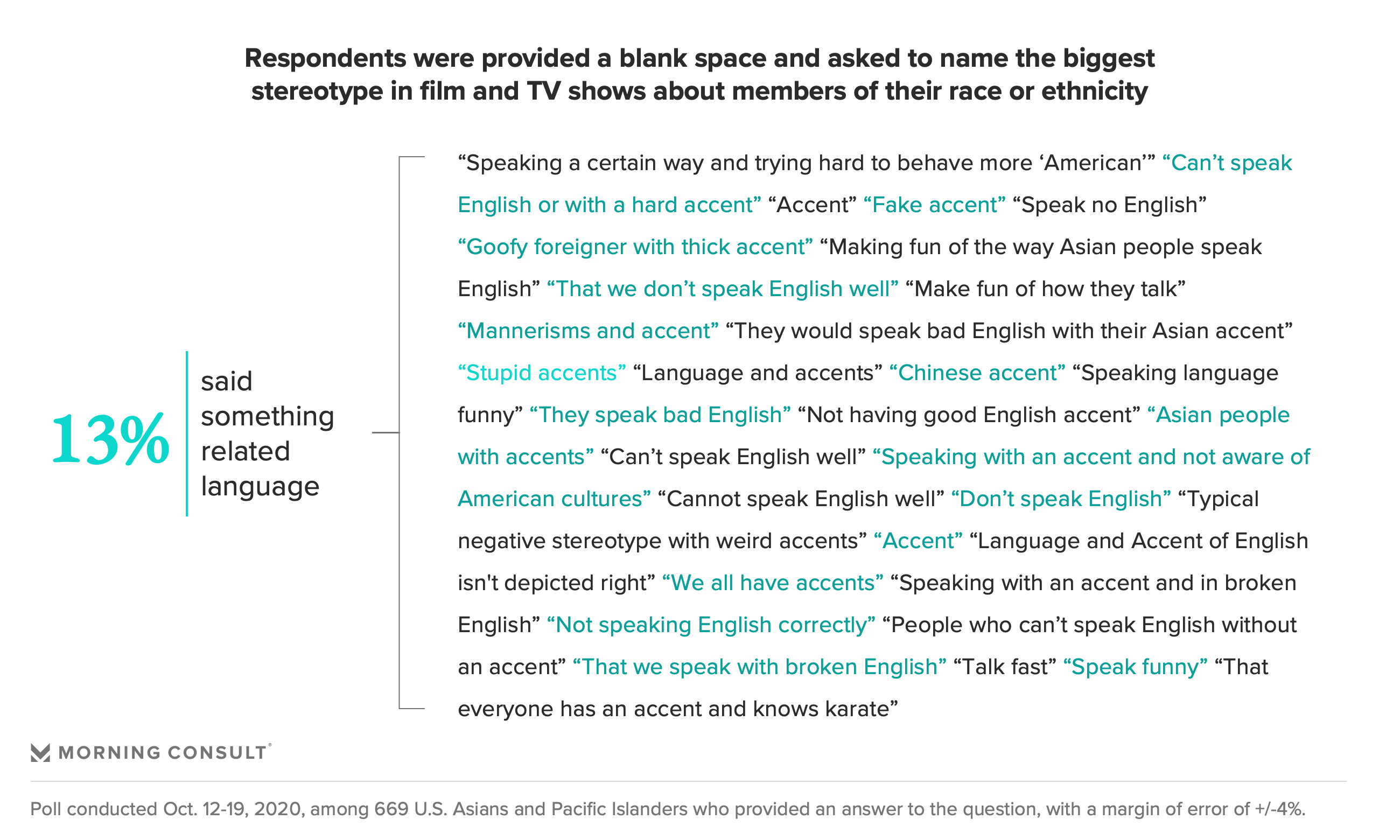 Bing Chen, chairman of Gold House, a nonprofit collective of Asian and Pacific Islander cultural leaders aimed at increasing their community’s representation and economic success, said that shifting the mindset is key to making concrete change in representation.

Instead of conforming to the roles Hollywood is creating for them, Chen said the Asian community needs to create their own roles.

“Why wait to be told what we should be cast as?” he said in an email. “Why not show who we are?”

In the survey, 5 percent of respondents voiced displeasure toward stereotypes about culture, identity and family. Some respondents called out Hollywood’s dilution of different Asian cultures and ethnicities as an attempt to create a single definition of what it means to be Asian.

“The vast array of ‘Asian’ cultures all kind of get diluted into one,” said one respondent. “There is not enough distinction between, say, Chinese culture and Japanese culture. More attention needs to be given so each culture is accurately represented.”

“When you try to mix and mash things together — either because of ignorance or because of trying to appeal to more Asian subgroups — that’s not going to work because we can spot that,” Mayeda said. “A Korean story with kimonos just doesn’t make sense.”

Recent projects have taken care to create specific portrayals of Asian culture, Mayeda said. The ABC sitcom “Fresh Off the Boat” featured a Taiwanese-American family, while “Crazy Rich Asians” focused on transnational, Chinese-American characters. The success of these films and TV shows, he said, has provided evidence that specific stories can resonate with vast audiences.

The survey also asked respondents what genres of film they would like to see more starring roles for members of their race and/or ethnicity.

The survey has a margin of error of 4 percentage points.

There is “just a hunger for representation,” Mayeda said, and audiences are eager to see increased representation in tentpole pictures — including superhero titles. Of the 1,300 top-grossing films between 2007 and 2019, 7.2 percent had speaking roles for actors of Asian descent, according to a September 2020 report from University of Southern California Annenberg’s Inclusion Initiative, while 2.8 percent had no Asian characters with speaking parts.

Audiences have rallied around Asian stories. In its opening weekend, “Crazy Rich Asians” brought in more than $26.5 million in the U.S. and Canada, and has grossed $238.5 million worldwide, according to Box Office Mojo. In 2019, Lulu Wang’s “The Farewell” beat “Avengers: Endgame” — the year’s highest grossing film — for the highest per-screen-average of 2019.

According to Chen, there are three key steps to further increasing representation: investing in Asian writers, bolstering production and capital to make projects, and creating smart, consistent distribution strategies to help Asian-led films succeed in the domestic and international markets, as well as on streaming services. Of the 1,300 films and 1,447 directors analyzed in the USC report, just 3.3 percent were helmed by Asian directors.

Upcoming films may offer Asian-American audiences a respite from these typical stereotypes. Walt Disney Co.’s Marvel Studios plans to release “Shang-Chi and the Legend of the Ten Rings” — the first of the company’s superhero films to feature an Asian lead — next year, as well as the animated film “Raya and the Last Dragon,” which was inspired by Southeast Asian culture. On the television side, Apple Inc. is slated to produce “Pachinko,” a story about a Korean immigrant family.

The more varied the stories, the better, said Chen.

“It’s going to take all facets of stories to unveil the dimensionality of our community and ensure its sustained commercial success.”