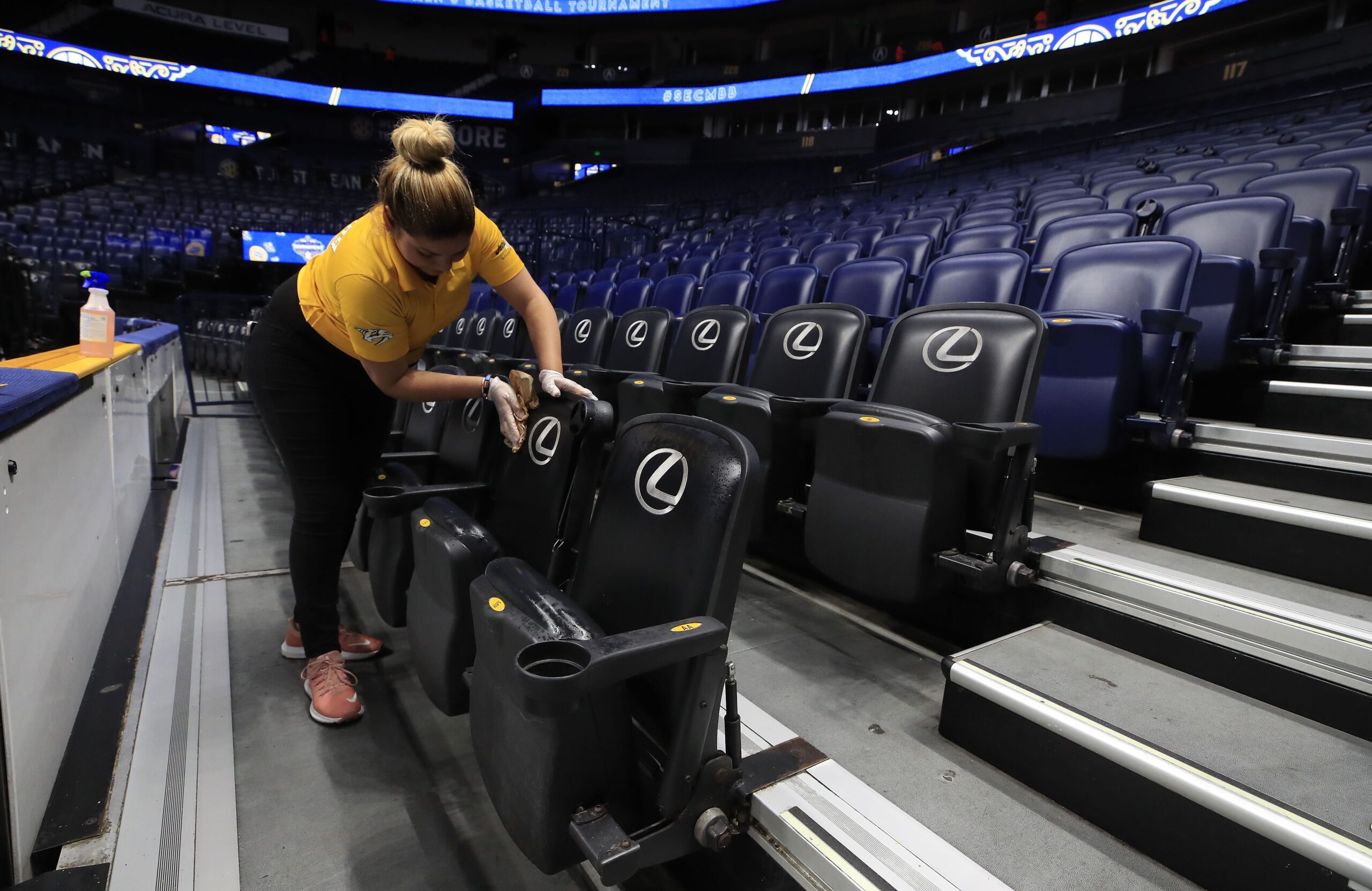 A worker cleans the seats after the announcement of the cancellation of the SEC Basketball Tournament at Bridgestone Arena on March 12, 2020 in Nashville, Tennessee. Nearly half (48 percent) of those who regularly attend sporting events said they would be open to attending an indoor event at any capacity. (Andy Lyons/Getty Images)
By Alex Silverman

The start of college basketball season Wednesday marks the beginning of sports’ move indoors for the winter, a shift that comes with an increased risk of coronavirus transmission among athletes, staff, coaches and, of course, fans.

Over the past month, the numbers of new COVID-19 cases and hospitalizations nationwide have increased by more than 100 percent to new high-water marks, and the number of new deaths is at its highest point since mid-May. Still, Morning Consult polling shows that the general public’s level of comfort attending indoor sporting events or concerts at one-quarter capacity, a benchmark no university is surpassing, has remained steady despite the spike. 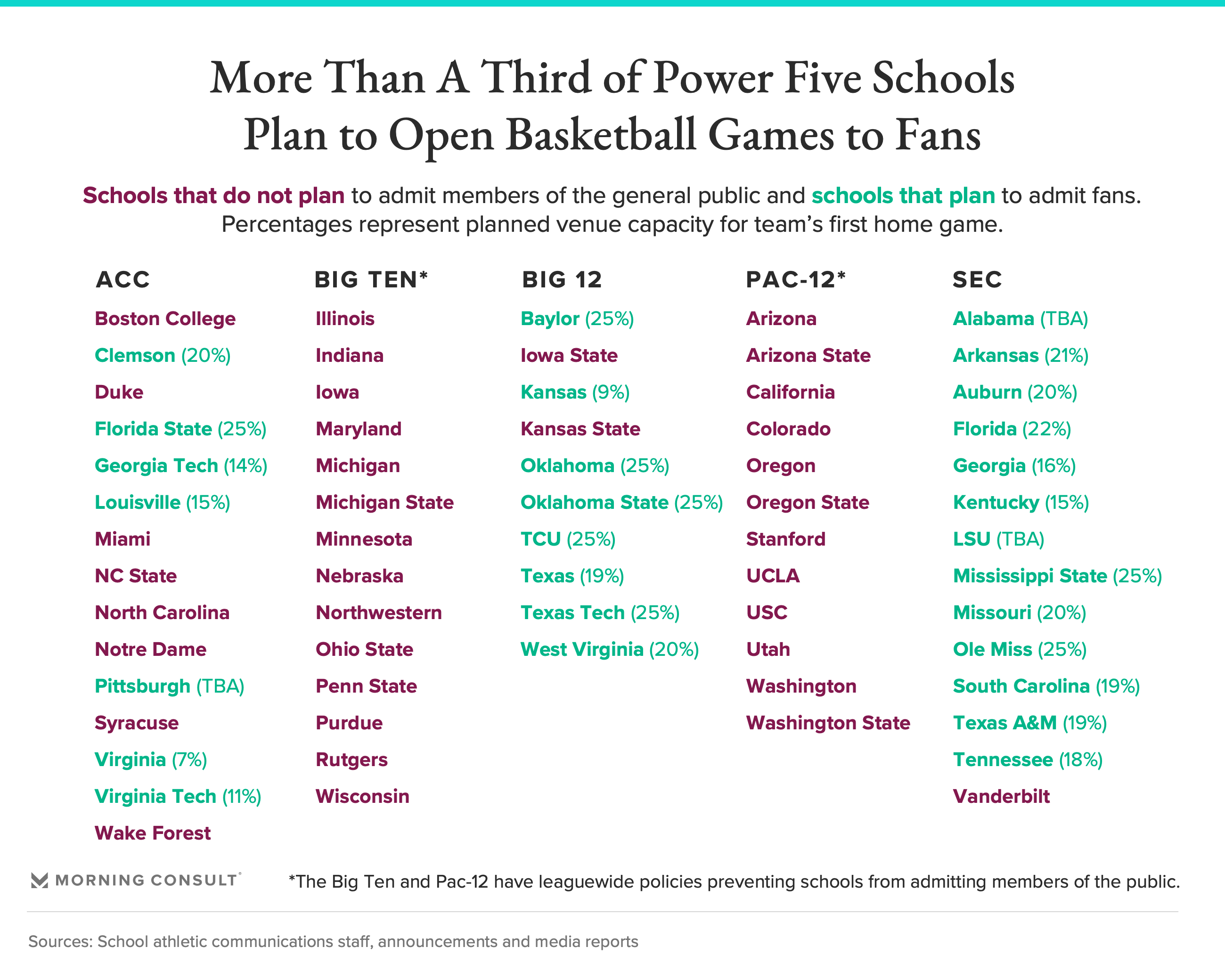 In a Morning Consult poll conducted Nov. 18-22, 40 percent of U.S. adults said they would be “very” or “somewhat” comfortable attending an indoor sporting event or concert with attendance capped at 25 percent of the venue’s capacity. Among those who indicated they attend multiple sporting events in a typical year, 61 percent said they would be comfortable attending an indoor event with attendance capped at 25 percent. Despite the recent coronavirus surge, both of those figures are virtually unchanged from an October survey. 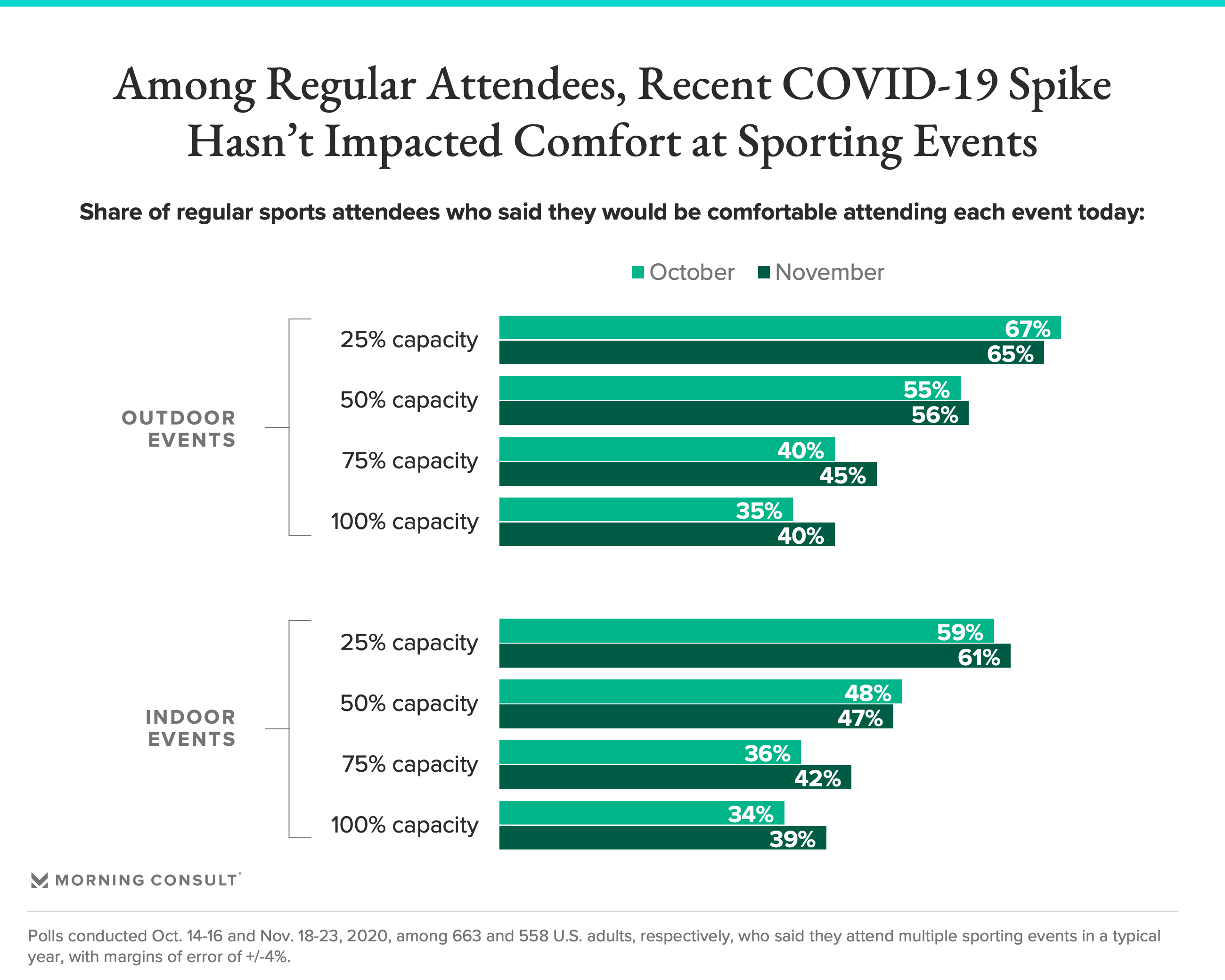 More than a third of the 65 schools in the Power Five conferences plan to allow members of the general public to attend their late-November or early-December basketball home openers in limited numbers, according to announcements and media reports, with permitted crowd sizes as high as 4,000 people or 25 percent of a given arena’s capacity. Those policies are subject to change as schools react to new coronavirus developments, and states and municipalities issue new guidance and regulations.

Both the Pac-12 and Big Ten have league-wide policies that prevent schools from hosting fans. SEC schools, with the exception of Vanderbilt, are all opening their doors, while the Big 12 and ACC are mixed bags.

The coronavirus has hit college basketball programs hard in the days leading up to tipoff, with high-profile coaches — including Syracuse’s Jim Boeheim, Tennessee’s Rick Barnes and Baylor’s Scott Drew — testing positive, and top Division I programs pressing pause on basketball activities and pulling out of non-conference openers.

Neutral-site events have largely decided to go fanless. The Bad Boy Mowers Crossover Classic, scheduled to be played in Sioux Falls, S.D., canceled plans on Monday to host 850 fans for each game amid a severe coronavirus outbreak in the state.

Related: As Venues Focus on Air Quality, Many Sports Fans Are Ready to Return to Indoor Events

In addition to limiting capacity, arena operators are implementing additional protocols to help prevent the spread of coronavirus, including mask requirements, sanitization measures and, in some cases, efforts to improve air quality.

The NBA, which is scheduled to begin its 2020-21 season on Dec. 22, sent a memo to teams earlier this month outlining guidelines for the admission of fans, though it is not yet clear which teams plan to host fans when the season begins. In addition, the Golden State Warriors submitted a plan to local officials that, through the use of rapid testing, would allow the team to fill Chase Center to 50 percent capacity.

The Centers for Disease Control and Prevention advise the public that the risk of transmission of coronavirus in indoor spaces is higher than in outdoor spaces based on a possible lack of ventilation.

The margin of error among the 2,200 U.S. adults surveyed is 2 percentage points, while the group of 586 individuals who regularly attend sporting events carries a 4-point margin of error.