Betty White Is Viewers’ Top Choice to Step Behind the ‘Jeopardy!’ Podium

69% of weekly ‘Jeopardy!’ watchers said they would be likely to watch the program if White hosted 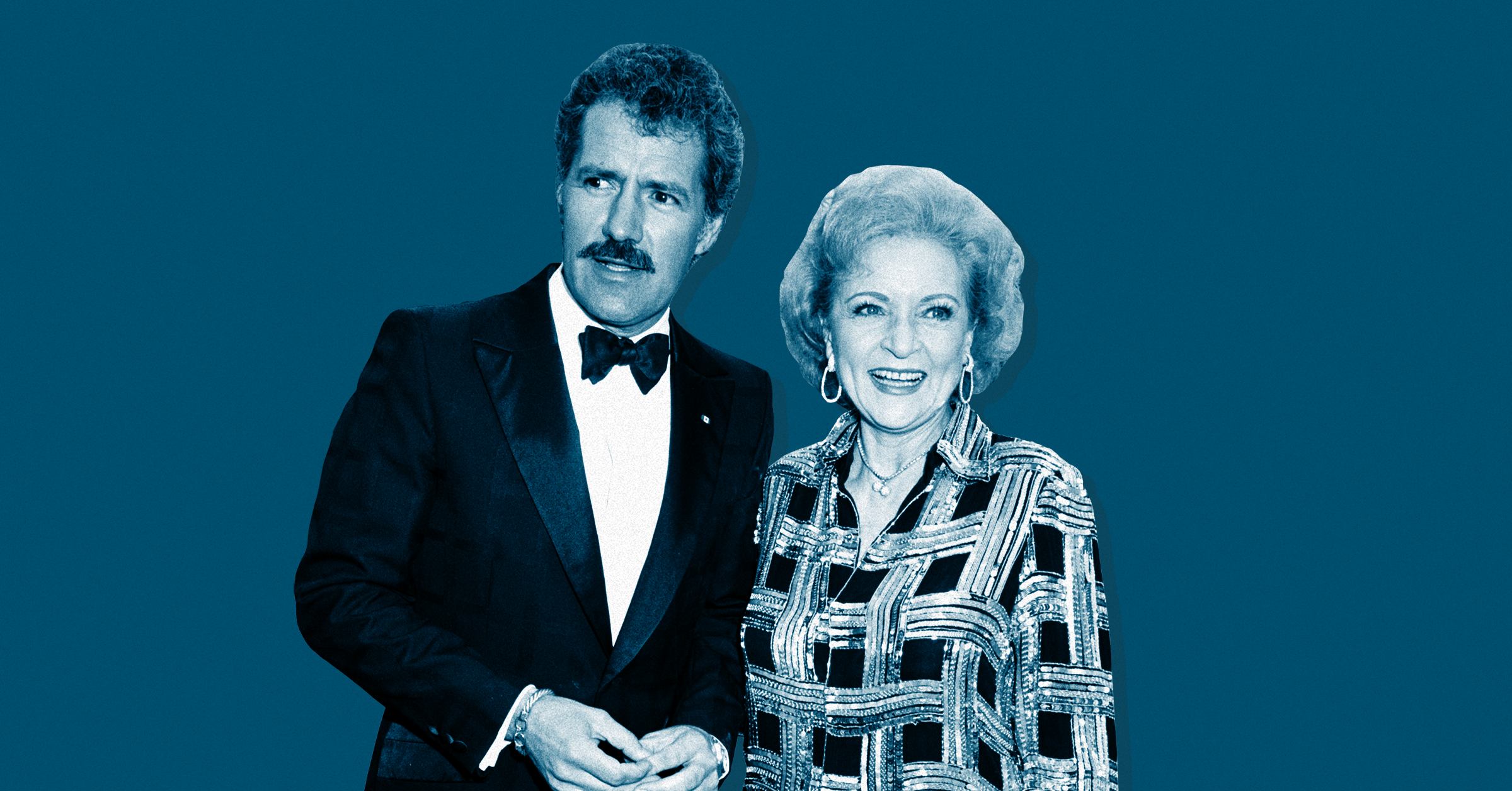 Former “Jeopardy!” contestant Ken Jennings was the second most popular choice of a list of rumored replacements, with 62 percent of weekly viewers saying they are likely to watch the program if he were the host, narrowly beating out CNN’s Anderson Cooper (61 percent) and actor and host LeVar Burton (58 percent). (Getty Images / Morning Consult Illustration by Samantha Elbouez)
By Sarah Shevenock

“Who is Betty White?” The actress and comedian is the person most favored to take Alex Trebek’s place on the “Jeopardy!” stage, according to a new poll. 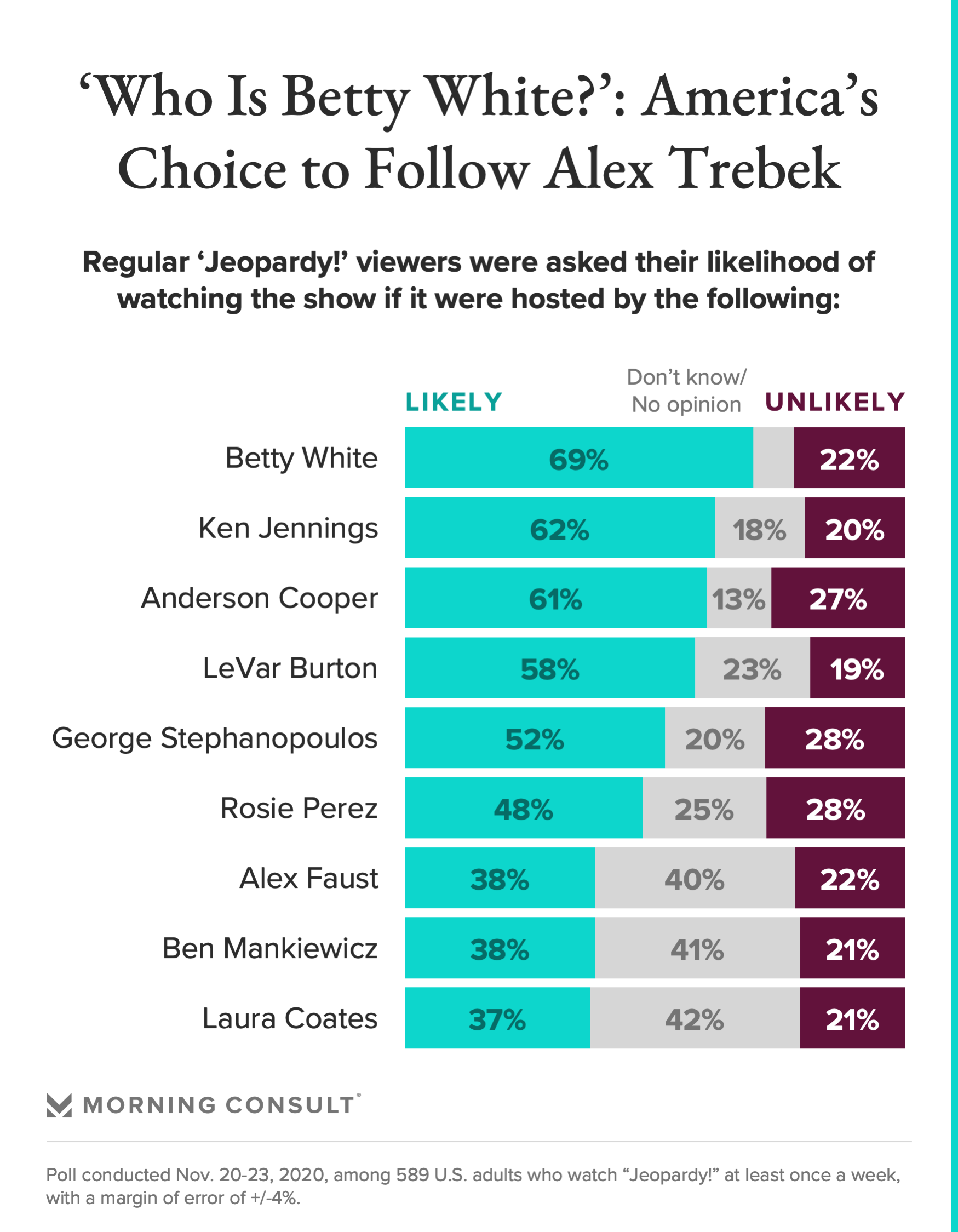 The Nov. 20-23 survey found that 69 percent of U.S. adults who watch “Jeopardy!” at least once a week said they would be likely to watch the show if she hosted, while former “Jeopardy!” contestant Ken Jennings, who won a record 74 games on the program, came in at No. 2 with 62 percent, and CNN’s Anderson Cooper came in third with 61 percent. Jennings will serve as an interim host when the game show resumes filming Nov. 30, with the Jennings-hosted episodes hitting the airwaves starting the week of Jan. 11, according to the Associated Press.

The subsample of 589 weekly “Jeopardy!” viewers has a margin of error of 4 percentage points.

Trebek, who died on Nov. 8 after a 20-month battle with stage 4 pancreatic cancer, had jokingly tossed White’s name into the ring as his successor. More seriously, in 2018, he told TMZ that he would like to see Los Angeles Kings announcer Alex Faust or CNN legal analyst Laura Coates succeed him. Thirty-eight percent of respondents said they would be likely to watch the game show if Faust hosted and 37 percent said the same of a Coates-hosted program.

The survey has an overall margin of error of 2 points.

Related: America Was Asked: Who Is the Most Popular Game Show Host?

As for ABC News’ George Stephanopoulos, whose agent has been lobbying for him to get the job, according to The Wrap, roughly half of weekly “Jeopardy!” viewers said they were likely to watch the show if he hosted.

Since Trebek’s passing, fans have rallied behind “Star Trek” actor and “Reading Rainbow” host LeVar Burton, with more than 104,000 fans signing a Change.org petition calling for Sony Pictures Entertainment to instill Burton behind the podium as of Nov. 23. Fifty-eight percent of weekly “Jeopardy!” viewers in the Morning Consult poll said they were likely to watch the quiz show if Burton hosted.

But whoever takes on the role of “Jeopardy!” host will have big shoes to fill: In an April 28-29, 2019, Morning Consult poll, half of adults said they can’t imagine watching “Jeopardy!” without Trebek.

Trebek’s final “Jeopardy!” episodes will air beginning Jan. 4, according to the Associated Press.