GOP voters see the president — not his allies in Congress — as their champion, and most would back him in 2024 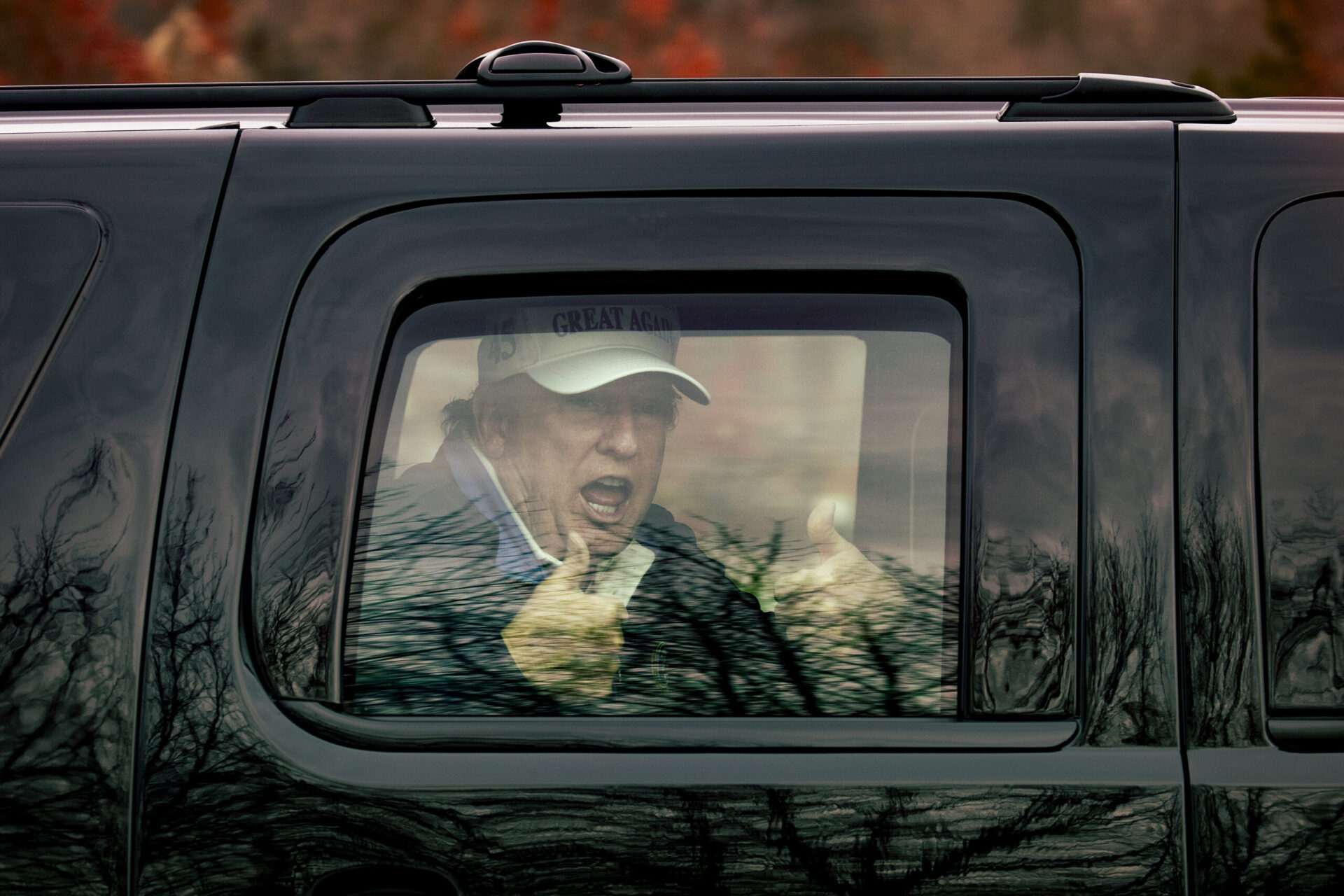 President Donald Trump gives thumbs up to supporters from his motorcade after he golfed at Trump National Golf Club in Sterling, Va., on Sunday. Even though the president is set to depart the White House in January, new polling shows why he is likely to continue to wield vast influence over the Republican base, and as a result, his GOP allies in Congress. (Tasos Katopodis/Getty Images)
By Eli Yokley

President Donald Trump will lose the official powers of the presidency in less than two months when Joe Biden takes office, a time when most recent presidents have stepped out of the spotlight to let their successors get their bearings. But with no indication that Trump is likely to fade into the background after he leaves the White House, Morning Consult/Politico polling suggests he’ll retain enormous influence over the Republican Party from outside the government.

A new survey shows most Republican voters choose the outgoing president over Republicans in Congress when asked who better embodies a number of key party leadership traits, and Trump is the heavy favorite to be the GOP’s next presidential nominee, according to an early, hypothetical test of 14 potential candidates.

Nearly 7 in 10 Republican voters (68 percent) said they consider Trump to be more in touch with the party’s rank and file, compared with 20 percent who said the same of Republicans in Congress. Trump was also more likely to be considered effective and committed to the country’s best interests, leading congressional Republicans on both questions by 54 percentage points, 71 percent to 17 percent. Another 56 percent of Republican voters say Trump is predominantly looking out for the party’s best interests. 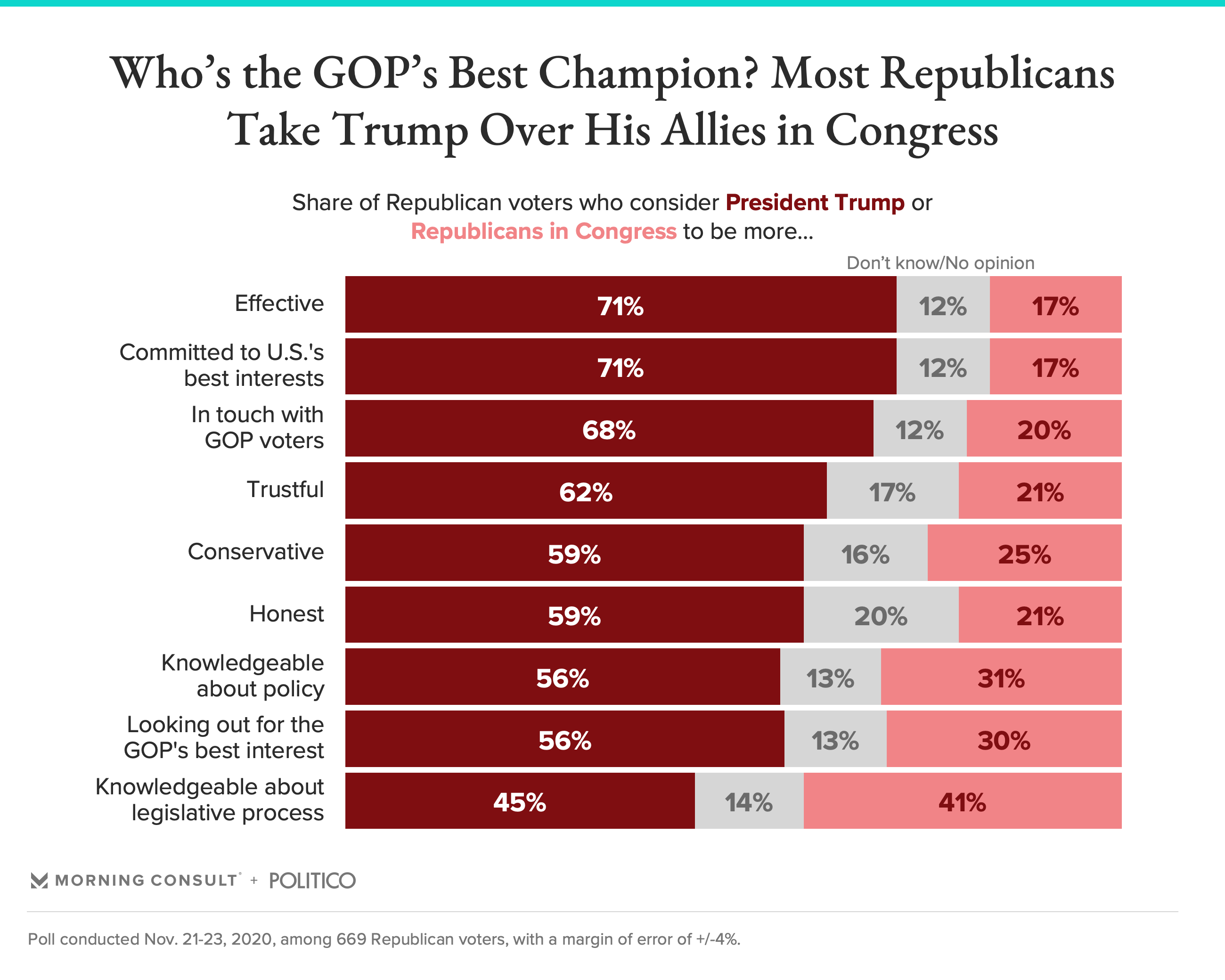 Trump holds smaller leads when Republican voters were asked which had more knowledge about policy or the legislative process, but both figures were improved compared with an August 2017 survey that pitted Trump against Senate Majority Leader Mitch McConnell (R-Ky.) on the same questions after the two butted heads following the GOP’s failed attempt to repeal and replace the Affordable Care Act.

The Nov. 21-23 survey, conducted among 669 Republicans and 1,990 registered voters overall, came as many top GOP leaders refused to publicly accept the president’s defeat. Trump’s influence on the party is casting a shadow on Washington in the short term, with Republicans facing two must-win Senate runoffs in Georgia on Jan. 5, and in the longer term, as both parties prepare to battle again for congressional majorities in 2022 and the race for the White House in 2024. 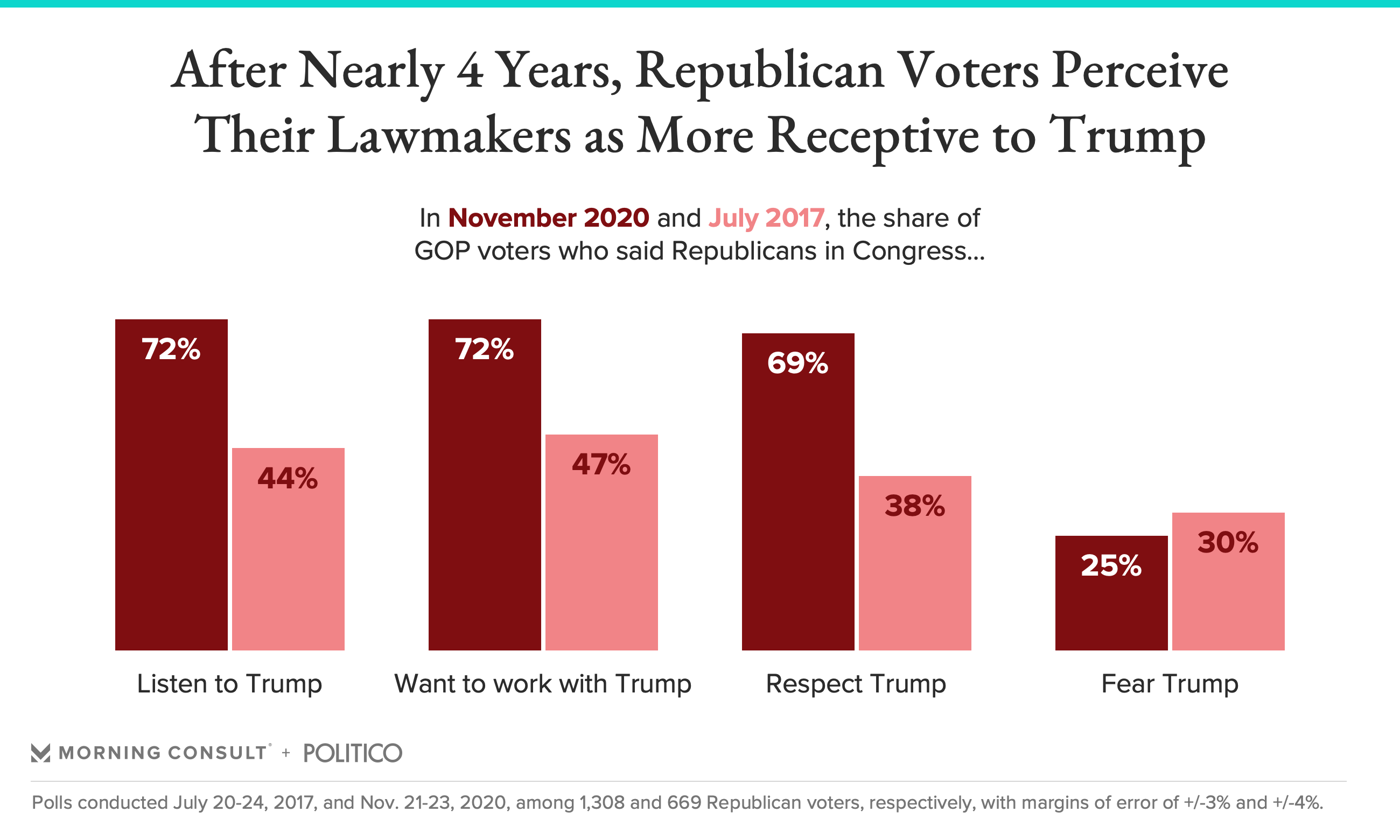 Trump’s critics have said Republicans on Capitol Hill fear his wrath given his unique political power with the base – something Trump and his allies view as a sign of strength. And while GOP voters don’t fully buy that congressional Republicans are scared of the president, they are increasingly cognizant of his grip on the party’s political establishment in Washington.

Compared to a July 2017 survey, which was conducted six months into Trump’s term, the share of GOP voters who said Republicans in Congress fear the president fell 5 points, to 25 percent, while the shares who said Republican lawmakers respect, listen to and want to work with Trump increased by double digits. The margin of error for Republican responses was 3 points in 2017 and 4 points in the latest survey. 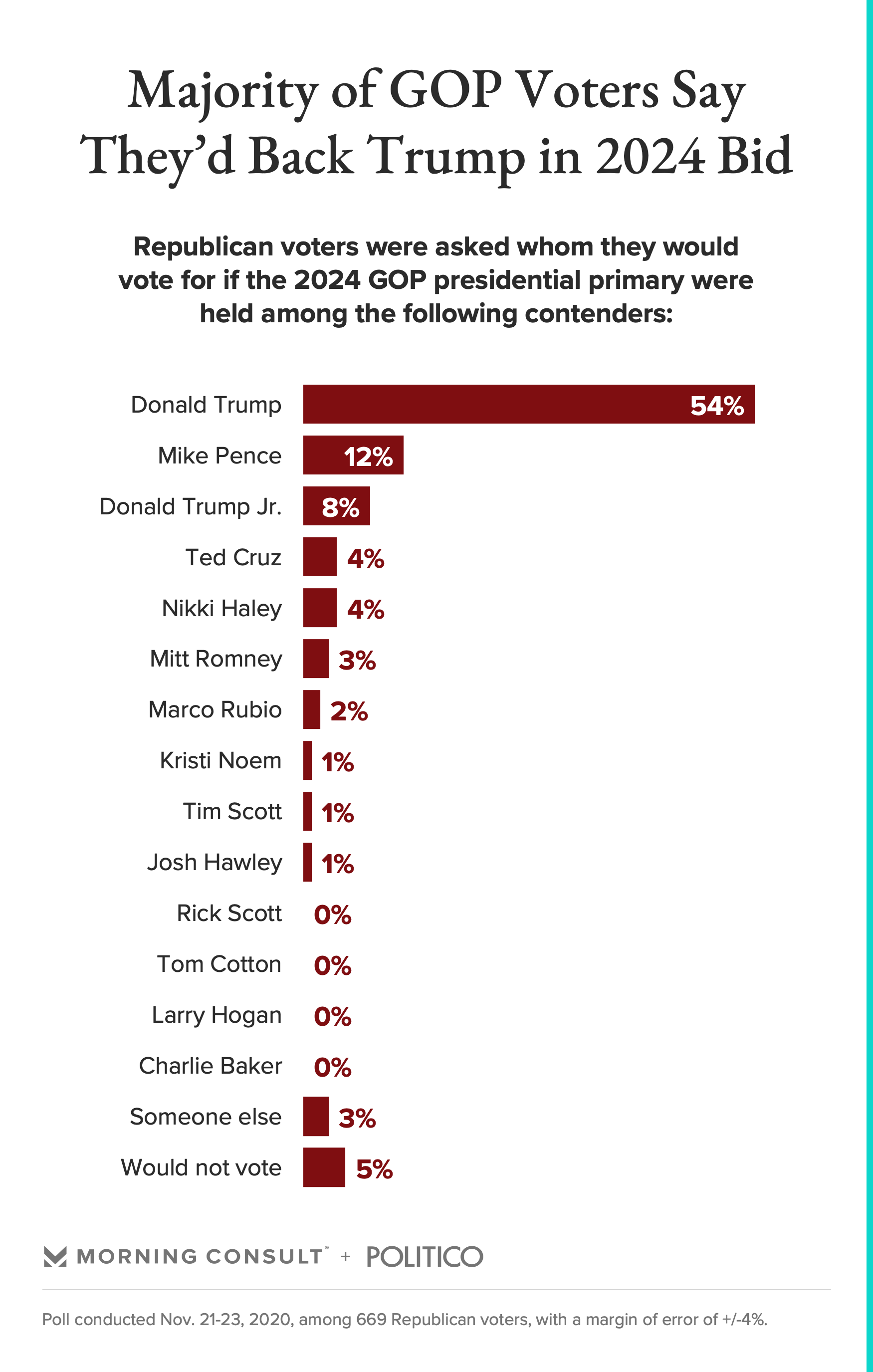 In a sign of the influence he hopes to wield, Trump has already flexed his muscle in an effort to build support for keeping Ronna McDaniel on as chair of the Republican National Committee, and he’s used his bully pulpit against Republicans who have challenged his efforts to overturn election results or even just acknowledged Biden’s victory.

Trump has also established a political action committee, giving him another avenue of influence over Republicans in the coming years, and perhaps more notably, has privately mused about launching a 2024 bid by year’s end, according to the Washington Post. If Trump does run, he’d begin as the early front-runner.

More than three years out from the traditional start of the presidential nominating contests, 54 percent of Republican voters said they would back Trump in a hypothetical primary contest. Another 12 percent said they would support Vice President Mike Pence, while Donald Trump Jr., the president’s eldest son, pulled 8 percent support in the matchup against his father.

Four percent of Republicans each said they would support Texas Sen. Ted Cruz or former South Carolina Gov. Nikki Haley, while lesser-known politicians — such as Sens. Tom Cotton of Arkansas, Rick Scott of Florida or Josh Hawley of Missouri — received even less backing.