Most of the public says it's OK with COVID-19 restrictions, but doctors say their behaviors don't always line up 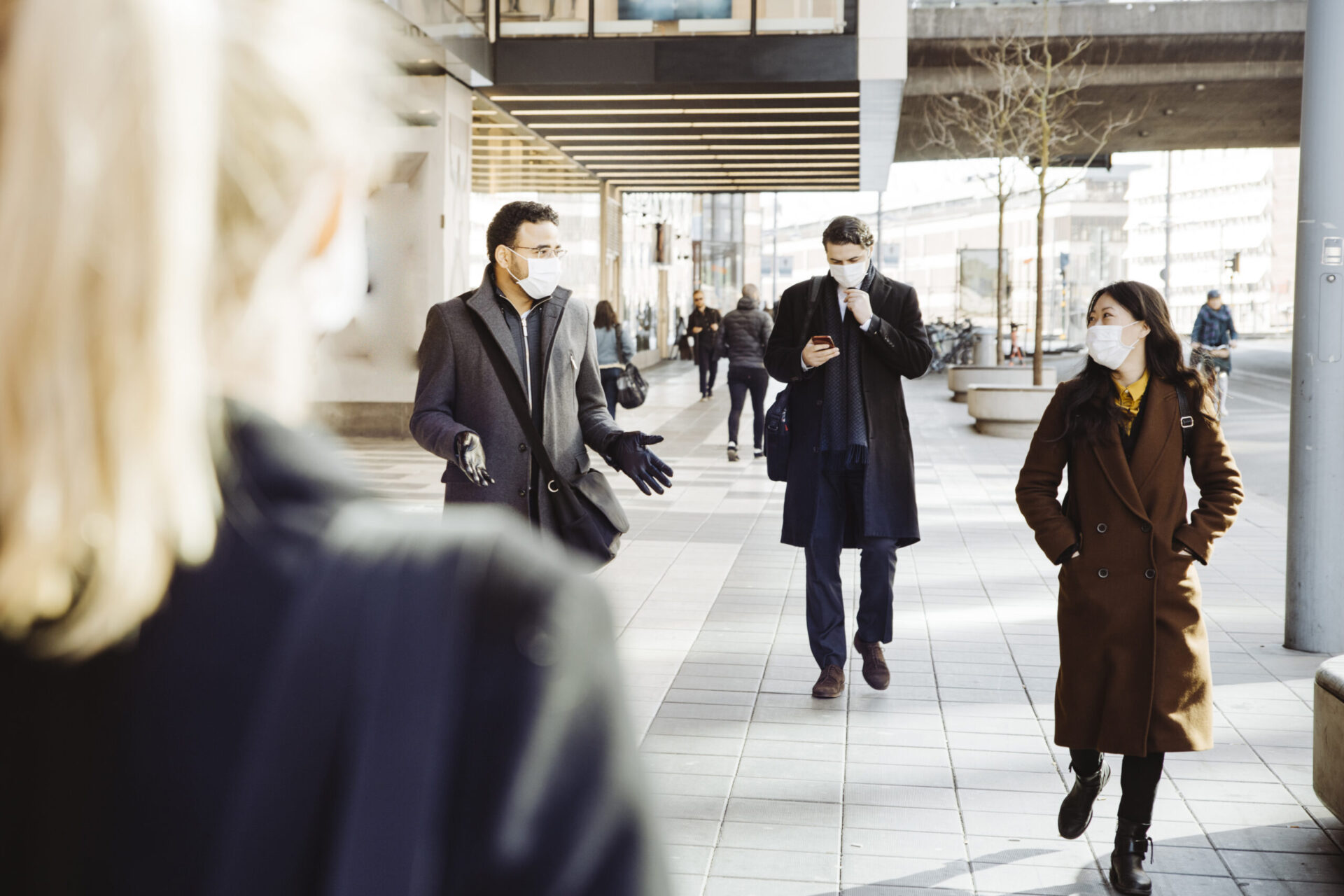 A new Morning Consult poll found that 68 percent of U.S. adults would support a state-instituted face mask mandate for public spaces, where noncompliance could be punishable by a fine or jail time. (Getty Images)
By Gaby Galvin

Most Americans support statewide mask mandates that carry penalties and stay-at-home orders, according to a new Morning Consult survey conducted as the country stares down its first COVID-19 winter.

The number of people hospitalized with COVID-19 has consistently hit record highs over the past three weeks, reaching more than 93,000 patients Sunday, and states and localities are tightening restrictions on restaurants, gyms and schools in an effort to tamp down the spread of the virus and alleviate the burden on health systems on the brink of collapse. Public health experts, including those advising President-elect Joe Biden, have clashed on how far to go, but despite the heated political discourse around so-called lockdowns, the new survey indicates most people are generally supportive of these public health measures.

For example, 68 percent of adults said that in the event of a rise in coronavirus cases in the United States, they’d either strongly or somewhat support nationwide stay-at-home orders that restrict travel except for essential reasons like getting groceries or seeking health care, while 61 percent said they’d support closures of businesses deemed non-essential, including hair salons and movie theaters.

Meanwhile, in the event of rising coronavirus cases in their states over the next month, 84 percent of adults said they support wearing masks in public, and 68 percent support fines or jail time for those who don’t abide by statewide mask requirements, according to the survey, which was conducted Nov. 18-22 among 2,200 adults and has a margin of error of 2 percentage points. 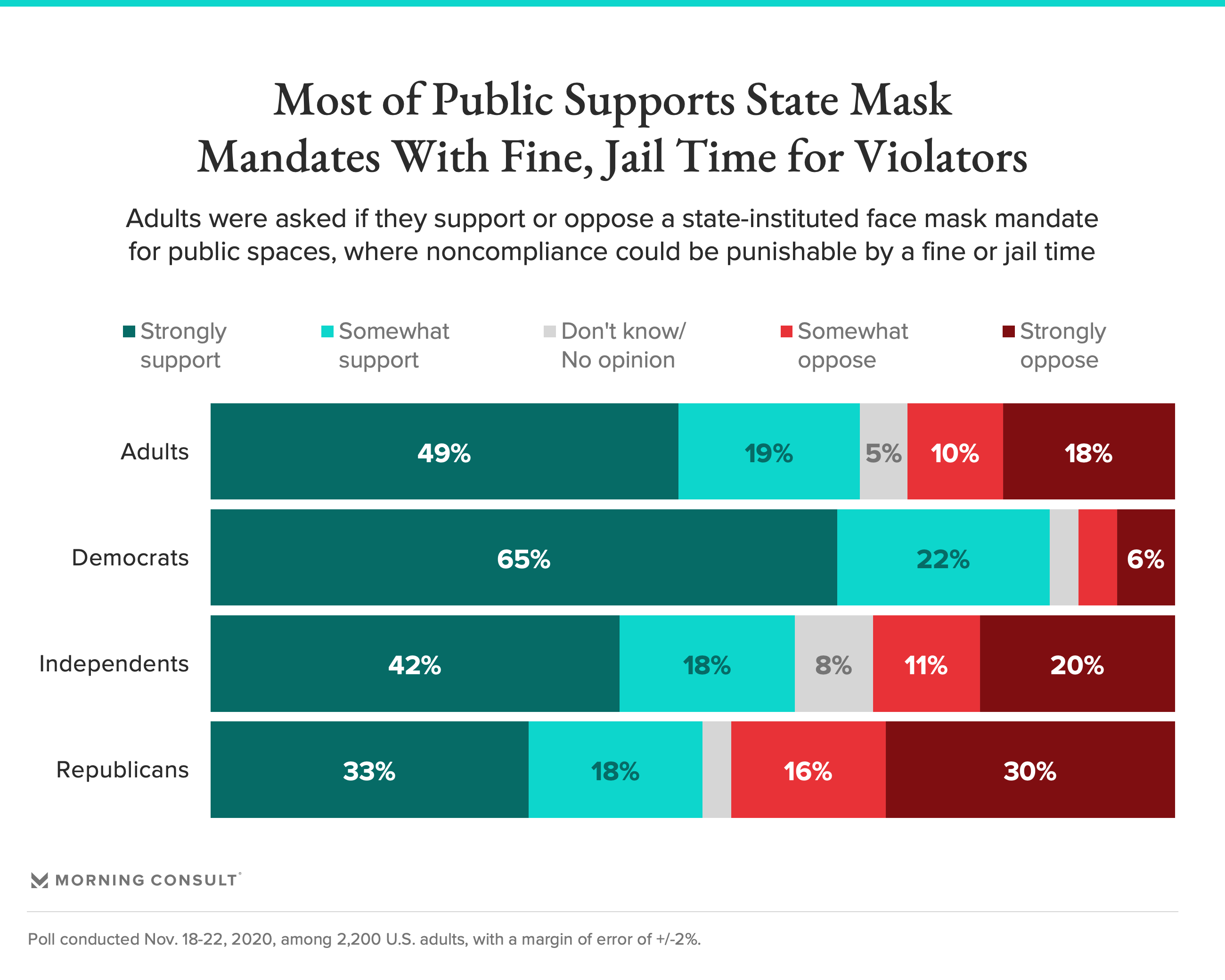 “Oftentimes a small but vocal minority will make it seem as if an issue is bigger than it really is,” said Dr. Marcus Plescia, chief medical officer of the Association of State and Territorial Health Officials. “But then you see data like this, and I think it does show that people are engaged and they are taking it seriously.”

Amid a pandemic that requires near-universal buy-in from the public in order to control the spread of the virus, though, the small-but-vocal minority can have an outsized effect. Another 26 percent and 32 percent of adults, respectively, said they would oppose nationwide stay-at-home orders or non-essential business closures. And even without potential penalties, 12 percent of adults said they oppose mask-wearing in public on a national scale, a group that includes 21 percent of Republicans and 6 percent of Democrats.

Political leaning was a stronger determinant of a respondent’s attitude toward these measures than income, education level or geographic setting.

“Ideally, we should be framing this as, masks are what allow businesses to stay open,” said Dr. Leana Wen, a visiting professor of health policy and management at George Washington University and the former health commissioner of Baltimore. Closing businesses without enough people also wearing masks and forgoing private social gatherings, for example, would “hurt the economy without actually tamping down the virus.”

Other national measures had broader consensus: 82 percent of adults said they strongly or somewhat support social distancing measures that require people to stand 6 feet apart from one another in public and limit large gatherings, like concerts or sports events, and 83 percent said they support quarantines of up to 14 days for people with COVID-19 symptoms. 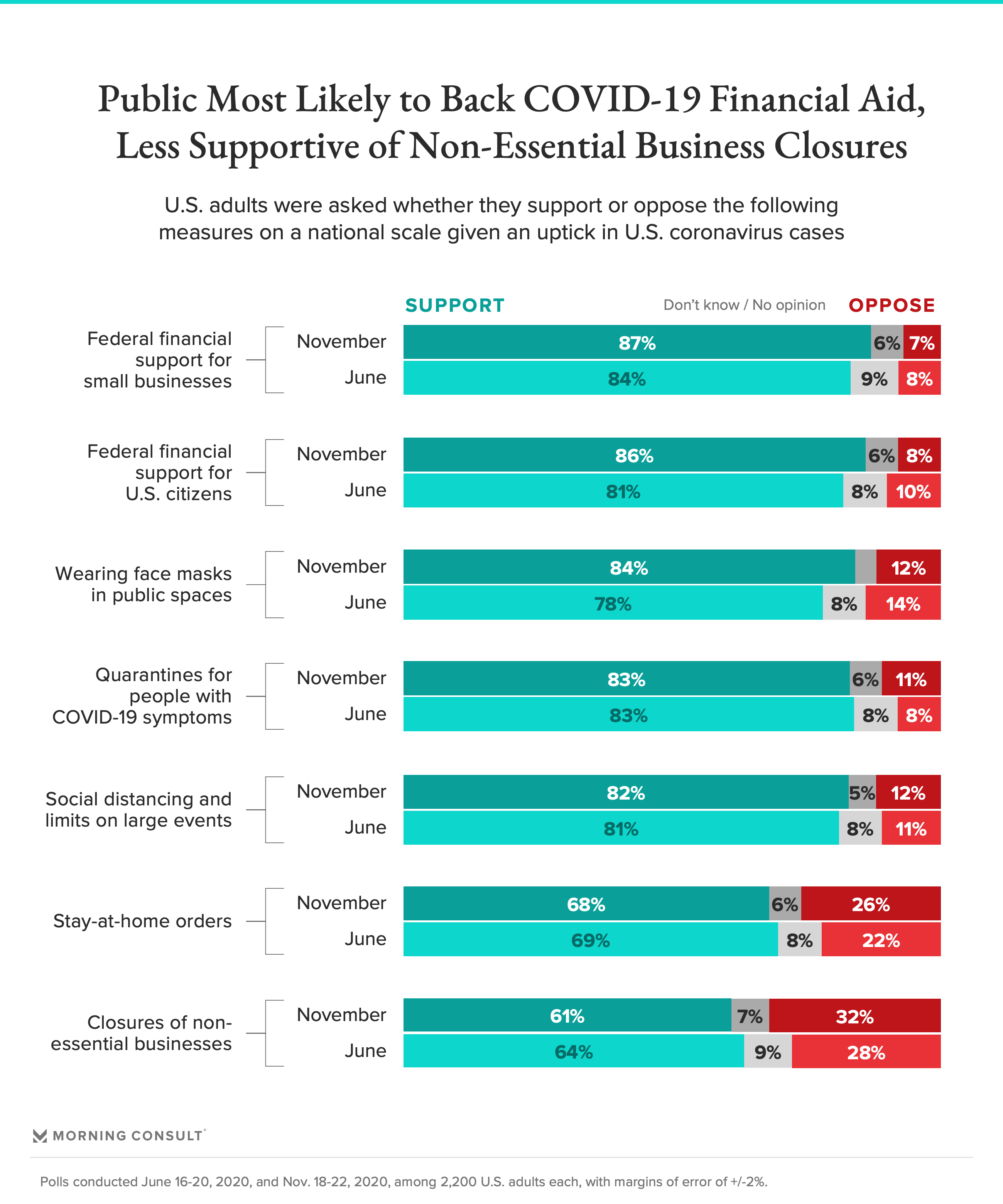 Despite the general agreement around these strategies, though, millions of people traveled for the Thanksgiving holiday, illustrating the divide between what people say they’re supportive of in theory and what they’re willing to do in practice, said Dr. Vin Gupta, an affiliate assistant professor at the University of Washington’s Institute for Health Metrics and Evaluation and a critical care pulmonologist who has been treating COVID-19 patients.

“I think people comprehend the threat, but whether they internalize it or let it impact their personal behavior, that’s where I think there’s a little bit more dissonance,” Gupta said.

Beyond immediate efforts to keep people from getting sick, more than 4 in 5 adults also support the federal government providing financial support to U.S. citizens and small businesses in the event of an increase in COVID-19 cases, the survey found. Democrats were equally likely to say they strongly or somewhat support financial relief for citizens as for small businesses, at 89 percent, while Republicans were slightly more likely to support funding for businesses (87 percent) than for people (83 percent).