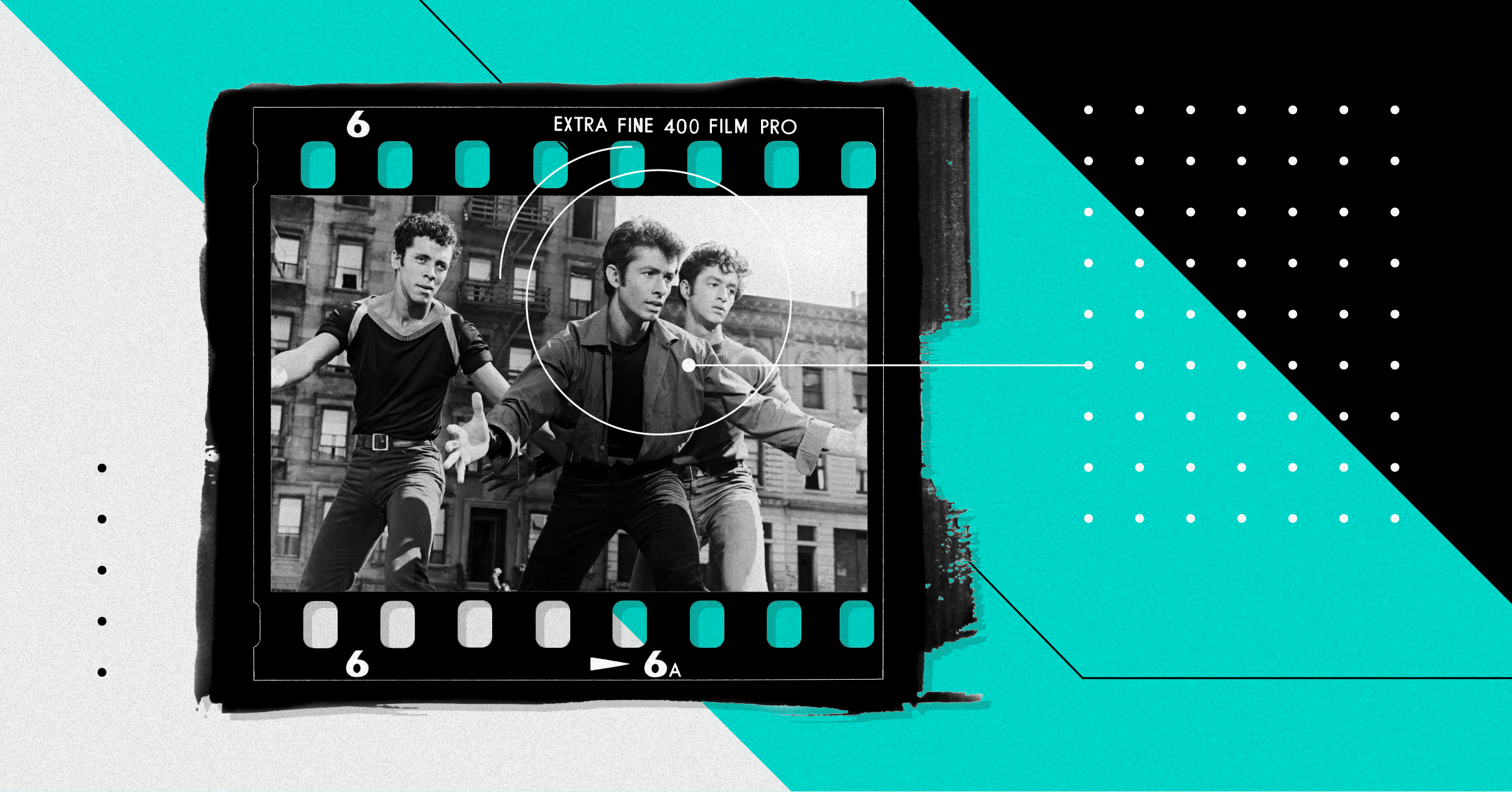 A Morning Consult poll found that 48% of Hispanic and Latin Americans surveyed said they are tired of seeing tropes that stereotype them in character roles, such as criminals. (Getty Images / Morning Consult illustration by Samantha Elbouez)
By Sarah Shevenock

“Crazy Rich Asians” made strides for Asian representation in the movie industry, and “Black Panther” increased the diversity of the superhero genre. But many Hispanic and Latin Americans are still waiting for the blockbuster film that upends the paradigm that has defined their identity in Hollywood for decades.

According to new polling, the most problematic trope that needs upending is portraying Hispanics as gang members. 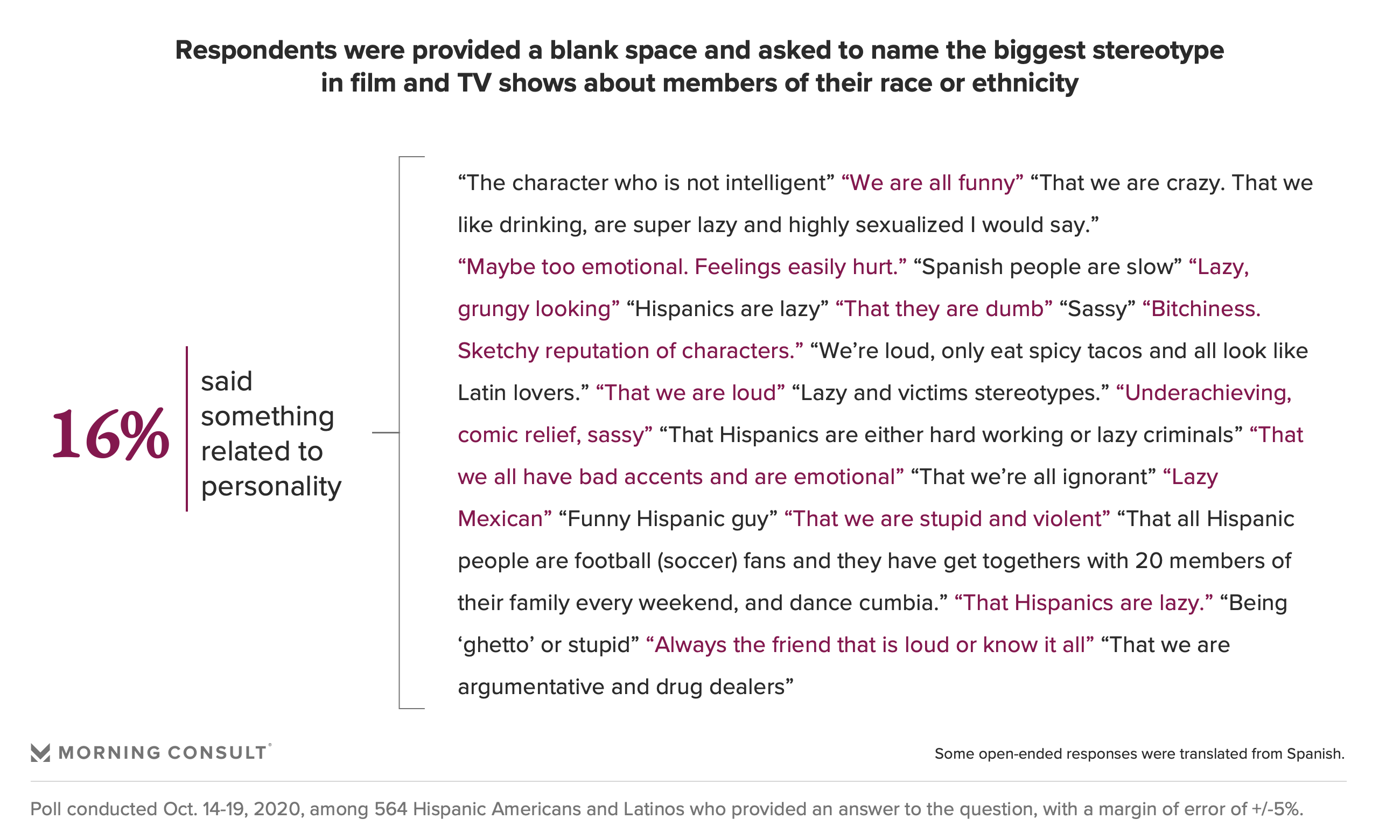 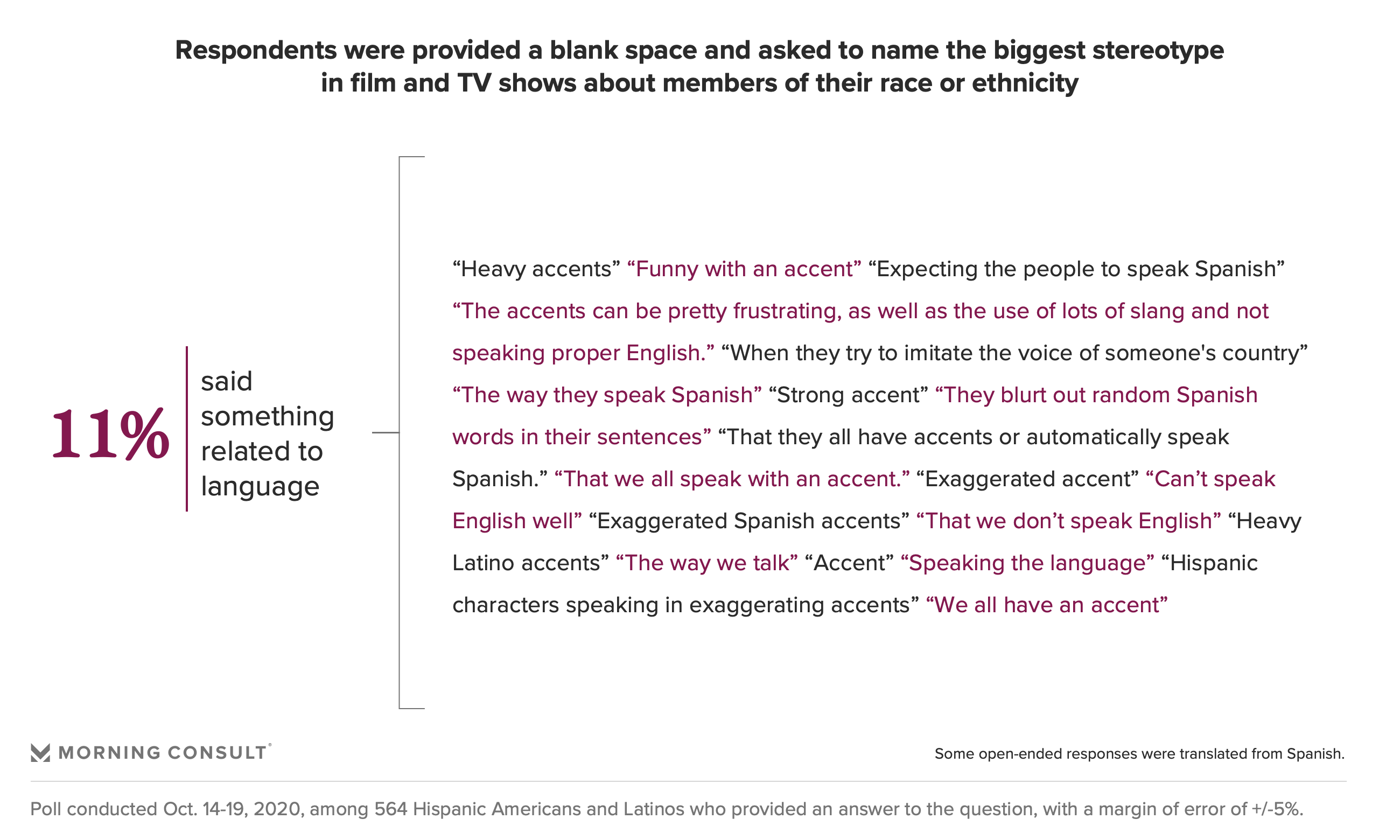 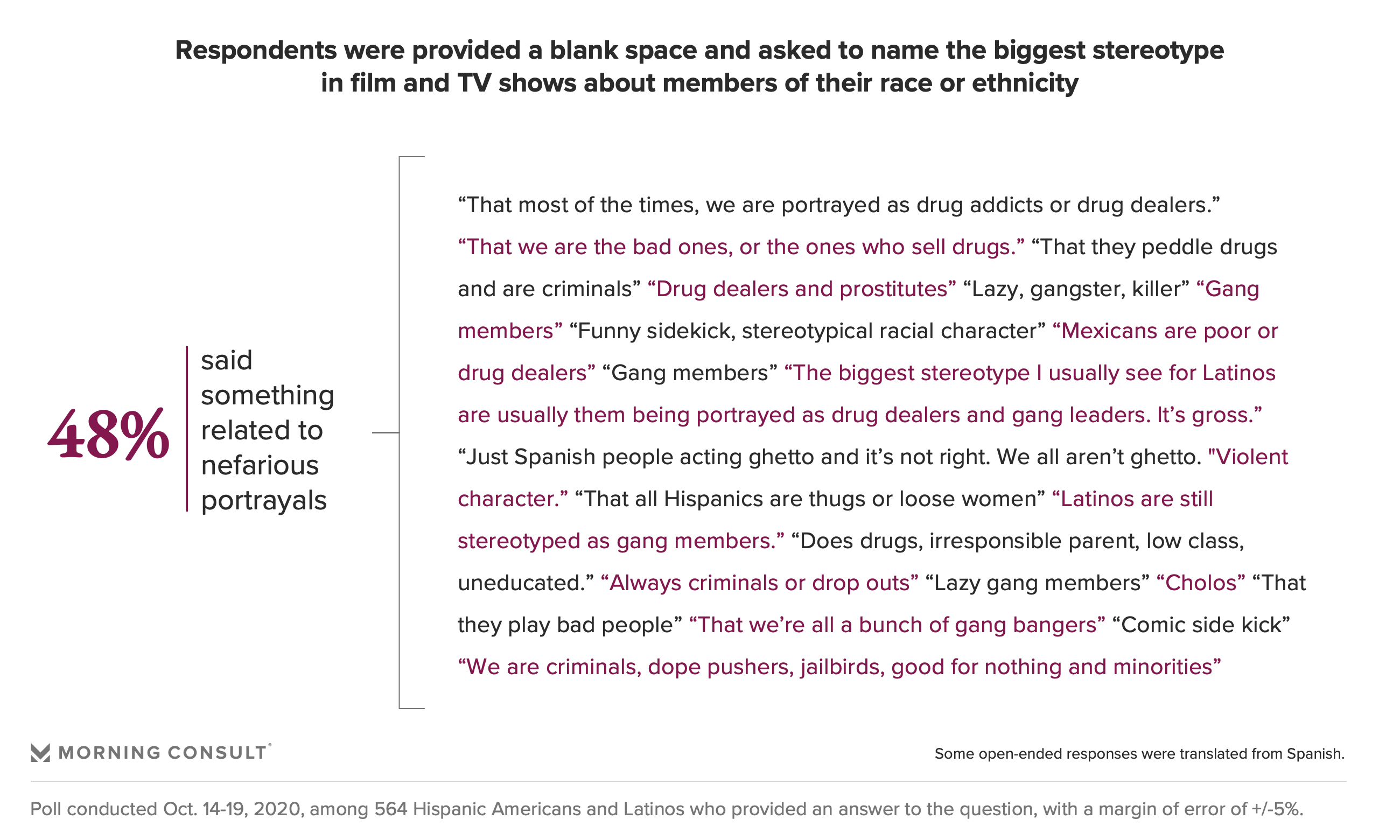 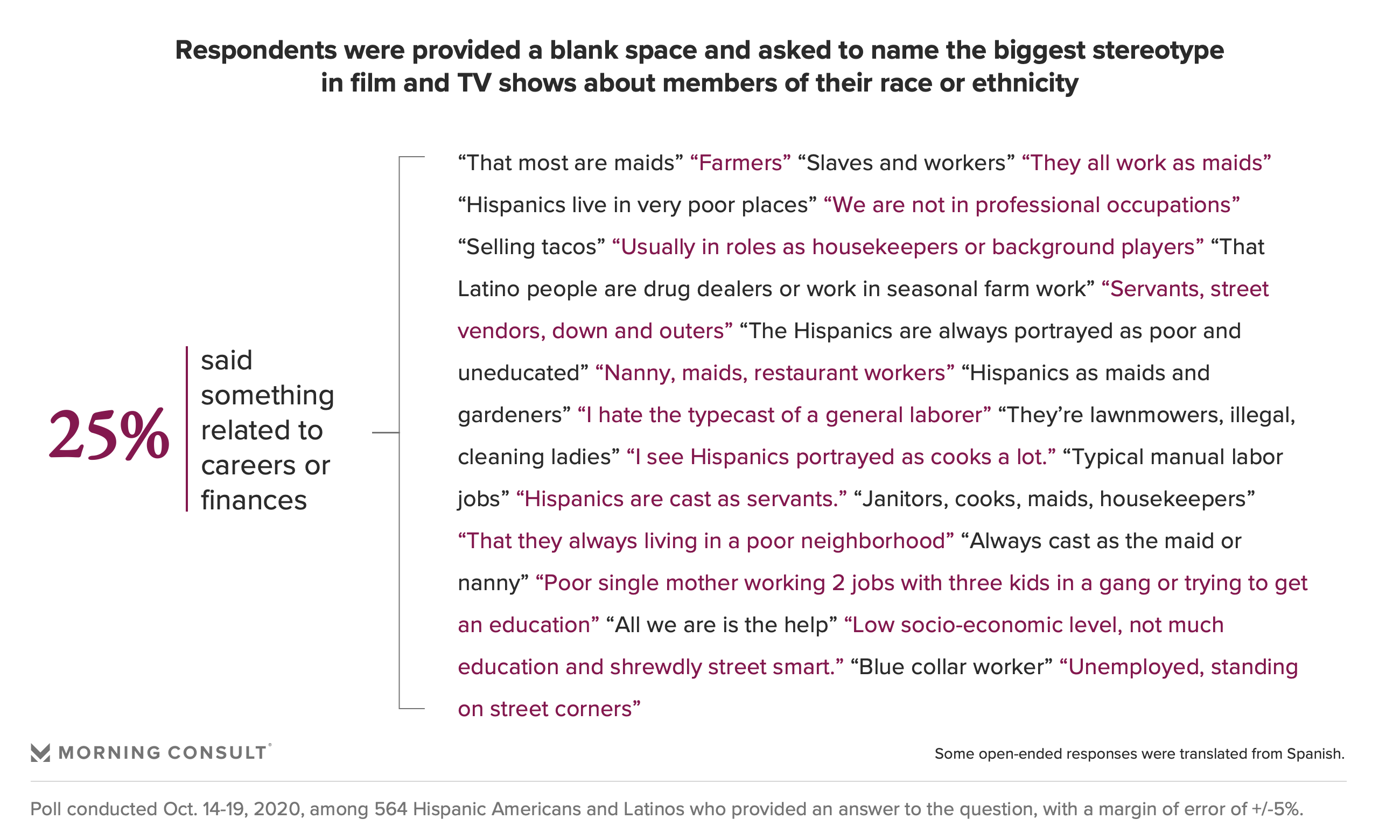 An Oct. 14-19 Morning Consult survey of 999 Hispanic Americans and Latinos asked them to name the biggest stereotype they see about members of their race or ethnicity in film and television. One in four respondents said the most frequent stereotypes they see are related to careers or finances, including portrayals of Hispanic Americans as poor or holding down blue-collar jobs.

But for 48 percent of the 564 respondents who provided an answer, tropes such as portraying Hispanic Americans as criminals were the biggest stereotype. Among that group, 29 percent specifically called out the stereotype of gang members and 22 percent said drug users or dealers. (The question has a margin of error of 5 percentage points.)

“If you just show these very one-dimensional characters that are gang members, there’s no story to them other than that they’re criminal,” said Ana-Christina Ramón, director of research and civic engagement at UCLA’s division of social sciences and co-author of the Hollywood Diversity Report. “That just gets really tiring for the audience.”

According to Ramón, shows with white protagonists that delve into the tropes of gangs and mobsters, such as “The Sopranos,” take more care to write their characters with depth, painting them as antiheroes, a luxury not often afforded to Hispanic and Latino characters.

Hispanic individuals are already underrepresented in film, according to an August 2019 report from the University of Southern California: Just 3 percent of the 100 top-grossing films each year from 2007 to 2018 starred Latino actors as the lead or co-lead. Of the roughly one-quarter of all Latino characters shown breaking the law on film from these top-grossing movies, 61.9 percent were part of an organized crime collective, such as drug dealers or a gang.

Involving members of the community early on in the production process could remedy this in the future, said Ben Lopez, executive director of the National Association of Latino Independent Producers.

“At the level where concepts are actually being bought and developed, we can recommend writers, directors, and producers that are vetted, that have experience, that can actually be the next generation’s Spielberg or Scorsese,” Lopez said. “Those folks are not 20 years into the future. They’re here already.”

Minority writers accounted for less than 11 percent of the credited writers on 41.3 percent of digital scripted shows in 2018-19 television season, according to UCLA’s Hollywood Diversity Report focused on television.

“What’s missing for the Latinx audience is that they don’t have a character that they can identify with on screen,” said Ramón, referencing the gender-neutral term.

In recent years, films and television shows with Hispanic or Latin-American protagonists have pushed back against these stereotypes. Netflix Inc.’s rebooted version of “One Day at a Time” found a passionate following that launched a social media campaign to protest the show’s cancellation in 2019. (It was later picked up by ViacomCBS Inc.’s Pop network.) Disney+ also made a splash with its Cuban-American protagonist in “Diary of a Future President.”

But, according to Ramón, the fragmented nature of modern viewing has made it hard for these programs to grab the attention of mainstream audiences.

Twenty-six percent of respondents in the Morning Consult survey said they would like to see more action or adventure films, while 14 percent of the 729 who answered the survey question said they wanted to see more superhero films. More Latino- and Hispanic-led comedies and dramas were also in demand among respondents, with 22 percent and 18 percent, respectively, saying they wanted to see increased representation in those genres. (The question has a 4-point margin of error.)

Blockbusters such as “Thor: Ragnarok” and “Guardians of the Galaxy” have featured performers of Hispanic or Latino origin such as Tessa Thompson and Zoe Saldana, but have yet to create first-billing films starring these actors or feature leading characters with similar backgrounds.

The release of “In the Heights,” a film about life in a Dominican-American neighborhood in New York’s Washington Heights, was slated for earlier this year but was postponed to June 18, 2021, due to the COVID-19 pandemic. The movie, Ramón said, could be a pivotal moment for Hispanic and Latino representation: “Not only do they want to see their face on screen, they want to see their story portrayed on screen.”