After the Election, Democrats Are Less Wary of the Electoral College, While GOP Support for Keeping It Drops A woman at the Save Our States booth hands out an "I Love the Electoral College" T-shirt during the annual Conservative Political Action Conference (CPAC) at Gaylord National Resort and Convention Center Feb. 27, 2020 in National Harbor, Md. Support for keeping the Electoral College system dropped 11 points among GOP voters after the election, from 65% in an Oct. 30-Nov. 1 poll to 54% in a Nov. 13-16 survey. (Alex Wong/Getty Images)
By Eli Yokley

Heading into the 2020 presidential election, Morning Consult polling found that a plurality of voters would do away with the Electoral College system that gave Donald Trump the presidency four years ago after Hillary Clinton won the national electorate by nearly 3 million votes.

Following Trump’s defeat by Democrat Joe Biden in both the popular vote and the Electoral College last month, the lion’s share of voters still support amending the Constitution to abolish the Electoral College, but the base of opposition to the current system has shifted.

According to Morning Consult polling conducted before and after the Nov. 3 election, the share of Democrats who support amending the Constitution so the candidate with the most votes nationally becomes president fell 9 percentage points, to 61 percent, while the share of Republican voters who support maintaining the current system dropped 11 points, to 54 percent.

Overall, 45 percent of voters supported a constitutional amendment to abolish the Electoral College in the Nov. 13-16 survey and 38 percent supported the current system, both virtually unchanged from the Oct. 30-Nov. 1 poll. The polls, conducted among roughly 2,000 registered voters each, have a margin of error of 2 points. 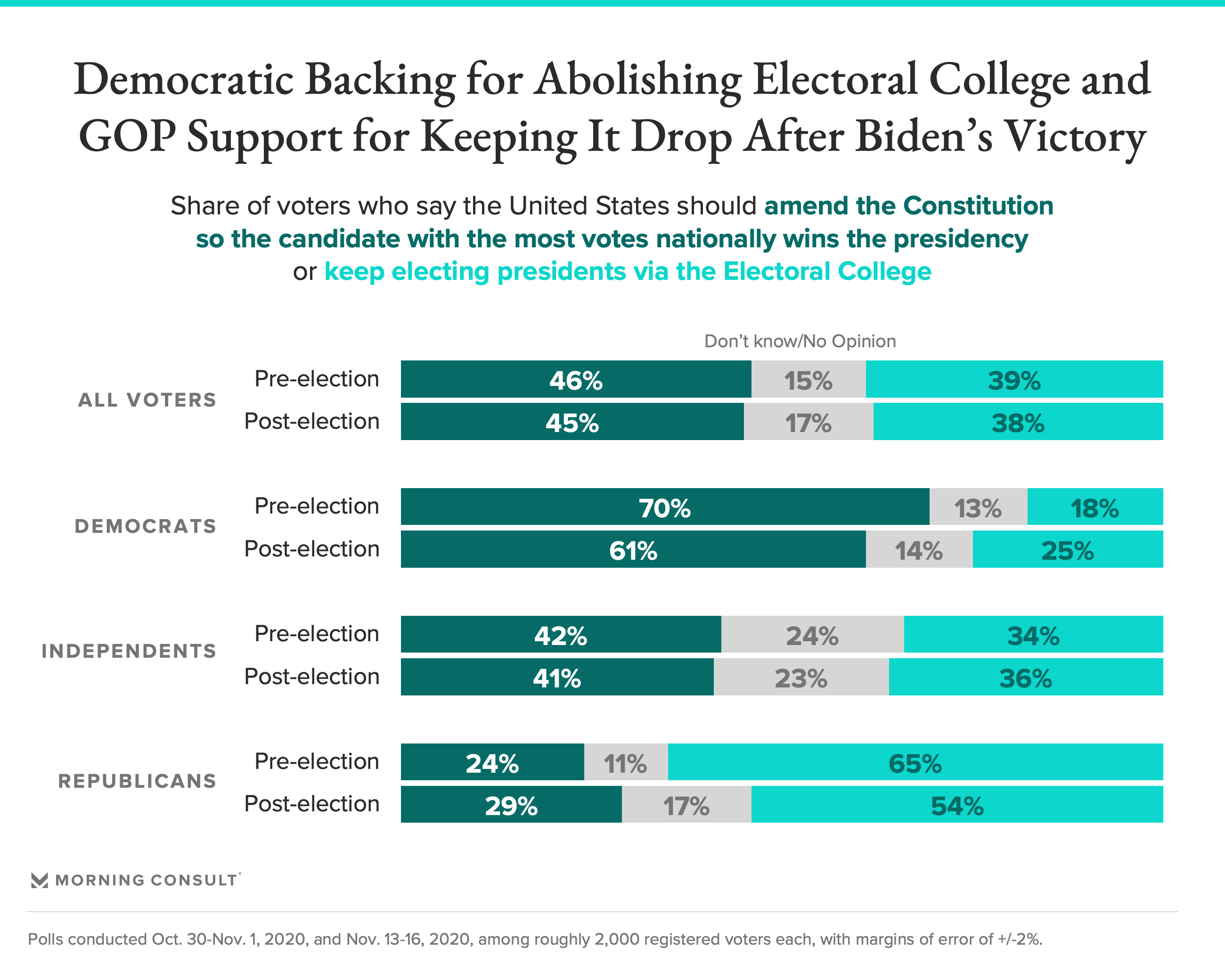 The data suggests that while voters’ views about the Electoral College still tend to fall along expected partisan lines, they are subject to changing circumstances and the ultimate election outcome.

“There’s very much a partisan divide in views about the Electoral College, but we shouldn’t assume that’s always going to be the case,” said Darrell West, vice president and director of Governance Studies at the Brookings Institution.

According to Gallup, most Democrats have supported a constitutional amendment to abolish the Electoral College since 2000, while Republican support for the move dropped from 53 percent in 2011 to 17 percent in 2016 after Trump’s victory over Clinton.

West said the possibility of Texas’ eventually turning blue could be a key factor in moving opinions about the Electoral College among Republicans, who have won the popular vote in its own right, most recently in 2004, but have also been the sole beneficiary in recent history of a system that assigns presidential victories irrespective of the national popular vote.

“If Democrats can win California, New York and Texas, there will never be another Republican president,” he said. “If you just look at the math, that becomes insurmountable.”

If Democrats can win California, New York and Texas, there will never be another Republican president. If you just look at the math, that becomes insurmountable.

Darrell West, vice president and director of Governance Studies at the Brookings Institution

West, who described himself in a 2019 essay as a onetime proponent of the Electoral College system who has since changed his views, said he expects discrepancies between the winner of the most votes and the winner of the most state electors to become more common in the future: Before the 21st century, just three men lost the popular vote but secured the White House. In the past 20 years, it’s happened twice, sending both George W. Bush and Trump to the Oval Office without the majority or plurality support of the electorate.

Those who oppose the current system for electing presidents have stopped short of an effort to amend the Constitution, opting instead to push legislatures to change the way their states award electors. Fifteen states that are friendly to Democrats and the District of Columbia, which together account for 196 electoral votes, have enacted the National Popular Vote Interstate Compact, which grants each state’s Electoral College votes to the winner of the national popular vote.

Pat Rosenstiel, a strategist who works for the group National Popular Vote, argued that the Constitution does not have to change in order to move away from the current system, noting that both Nebraska and Maine have already changed how they award electors to apportion them by congressional district.

“I don’t change the city charter to fill a pothole,” he said. “I don’t believe the Constitution is broken here. Article II, Section 1 allows the states to form electors in any way they choose.”

Related: Trump Stuck to His 2016 Playbook. Ultimately, It Did Not Work

The pact is within 74 electoral votes of the 270 needed to effectively neutralize the impact of the Electoral College, he said. According to Rosenstiel’s group, nine other states — including swing states such as Arizona and North Carolina, and conservative bastions such as Oklahoma and Arkansas — have passed the compact in at least one legislative chamber.

For Rosenstiel, a conservative who advocates for a cause often championed by the left, the issue is not about partisan politics — though he acknowledges the framing is impossible to ignore, given its implications on presidential power. For Republicans who are generally more supportive of the current system, Rosenstiel said the Democrats’ strength in Arizona and the “Blue Wall” Midwestern states this year, as well as gains in places like Georgia, should be a warning sign that could lead to the partisan frame on the issue shifting again.

“We don’t need to wait for Texas to go blue for Georgia and Arizona to have gone blue,” he said. “You could make the case that you’re dangerously close to single-party control of presidential elections.”