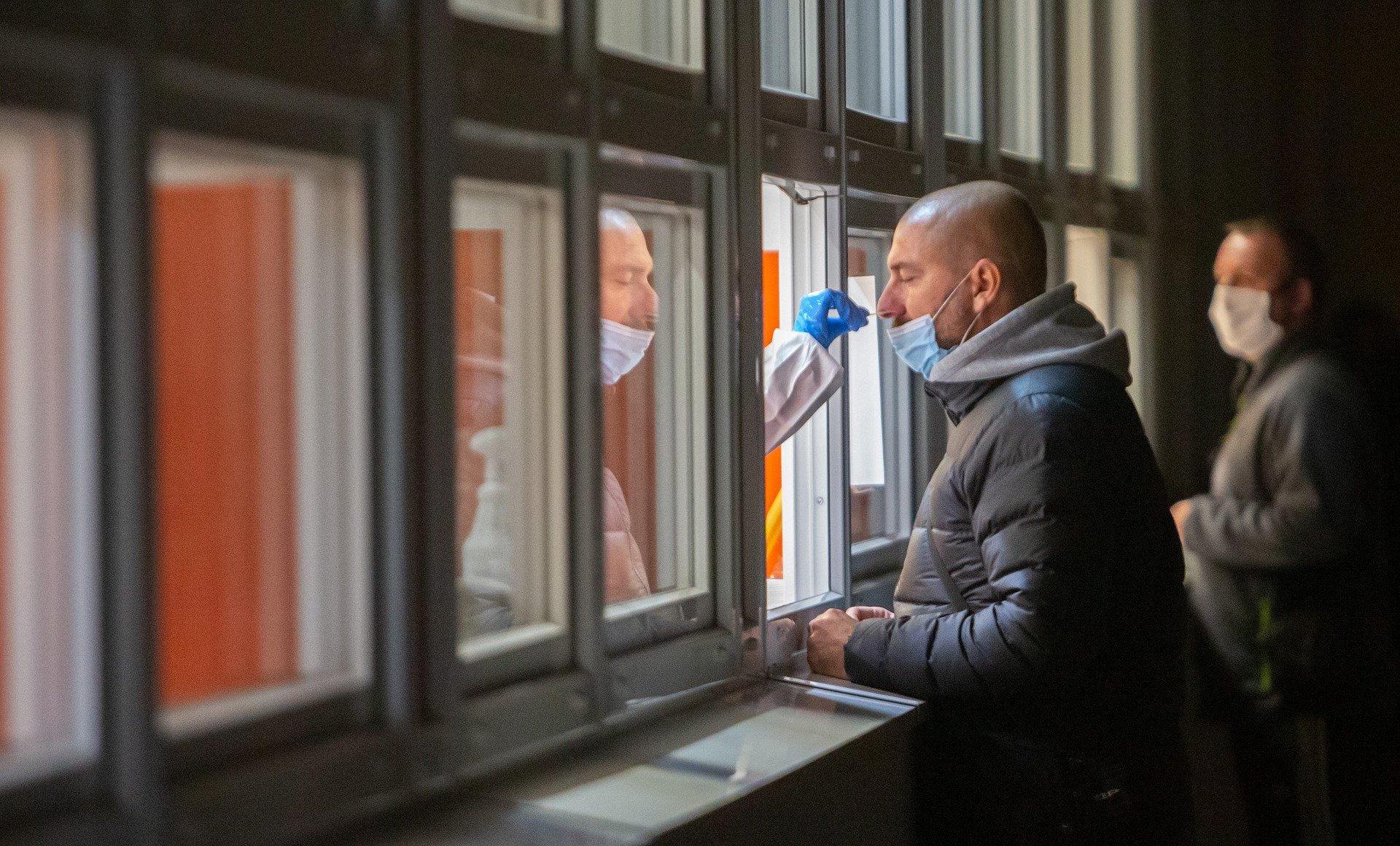 A new Morning Consult poll found that 73% of U.S. adults said managing the coronavirus pandemic should be the top priority of President-elect Joe Biden and Congress. (lukasmilan/Pixabay)
By Gaby Galvin

After an election season centered largely on the coronavirus pandemic and health care, Americans have a new list of priorities for President-elect Joe Biden and the incoming Congress.

When it comes to health care, U.S. adults place managing COVID-19, protecting health coverage for people with pre-existing conditions and lowering prescription drug costs at the top of the to-do list for the incoming Biden administration and Congress, according to a Morning Consult poll conducted Nov. 18-22. Yet the public isn’t very confident about policymakers’ ability to accomplish these goals, and partisan divides are stark.

For example, while 73 percent of Americans say managing the COVID-19 pandemic should be a top priority, 52 percent think the president-elect will “definitely” manage the pandemic, including about 3 in 4 Democrats and 1 in 4 Republicans.

“I’m not surprised to see coronavirus No. 1,” said Texas Rep. Michael Burgess, the top Republican on the House Energy and Commerce Subcommittee on Health. The end of the worst phase of the pandemic is now in sight, he noted, aided by vaccines and treatments that were launched under “the Trump administration, and the benefits will be felt in the Biden administration.”

Beyond COVID-19, Democrats and Republicans had different health care wish lists. For Democrats, coverage protections for people with pre-existing conditions, improving the Affordable Care Act and improving health disparities were the top priorities. Republicans put lowering prescription drug costs, coverage protections and ending surprise medical billing at the top of their to-do list, though they were less likely than Democrats to say any particular health issue in the survey should be prioritized by the Biden administration and Congress.

The office of Rep. Richard Neal (D-Mass.), who chairs the House Ways and Means Committee, which oversees Medicare and influences health policy, declined to comment on the survey findings. 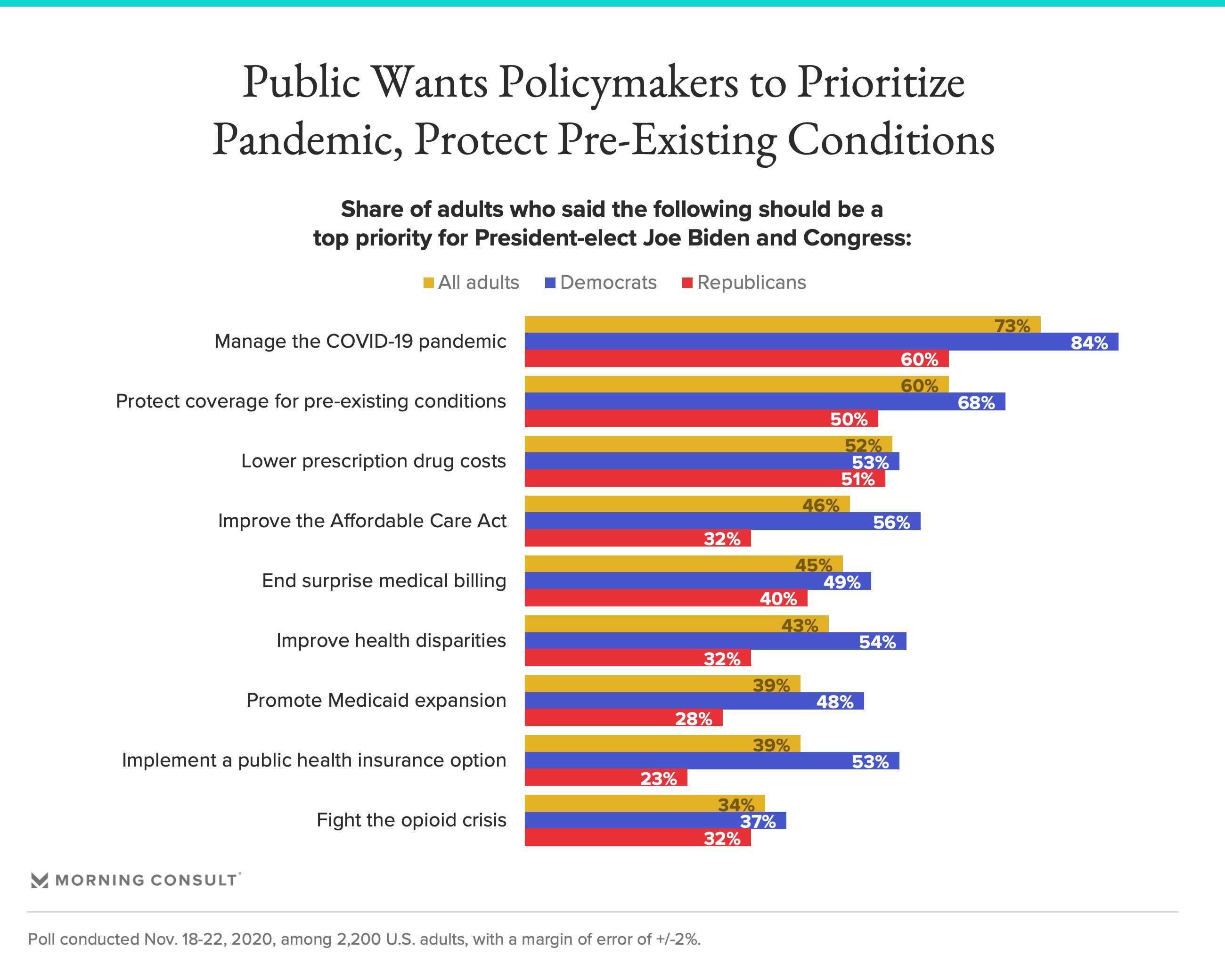 Drug costs, which are typically a higher health care priority, are “really a universal constituency issue that is going to return when the pandemic is under control,” said Dan Mendelson, a health care consultant and founder of Avalere Health. “No one should get complacent by seeing that these numbers are low.”

While Republicans and Democrats were split on their next priorities, the public overall put promoting Medicaid expansion in states that have not expanded the program, implementing a public health insurance option and fighting the opioid crisis at the bottom of the to-do list for Biden and Congress, according to the survey, which was conducted among 2,200 adults and has a margin of error of 2 percentage points.

How people prioritized various health issues would almost certainly differ by patient group, such as Medicare beneficiaries or pregnant women, said John Rother, president of the National Coalition on Health Care. And the findings may be more of a reflection of what people are most familiar with, not the issues that are most impactful, said Ben Isgur, who leads PwC’s Health Research Institute.

People may not realize, for example, “how few people that Medicaid actually covers in some states,” Isgur said. “I think that is one of the failings of the health industry, that we don’t really do a good-enough job explaining what all of this is and how it can affect consumers.”

Regardless of public opinion, several of these issues have bipartisan interest among lawmakers and could see movement in Congress, including legislation on surprise medical billing and drug pricing, Rother noted. The Biden administration is also likely to keep health disparities top of mind when developing policy, Mendelson said, especially given “they don’t necessarily need legislation to do a lot in this area.”

That could entail changing the ways health plans and providers are paid and initiatives to incentivize people of color to go into the medical field, he said.

“Given the realities of a split Congress, I do think that a lot of what the administration wants to accomplish is going to need to be done through regulatory change, as opposed to legislation,” Mendelson said.