National accounts data from the Bureau of Economic Analysis provides insight into trends in aggregate savings or personal income, but aggregate data has the potential to mask pockets of vulnerable households since savings or income may be accumulated by a small number of wealthy individuals.

For a more comprehensive view of the strength of U.S. consumers’ finances, this analysis uses Morning Consult’s proprietary longitudinal economic survey research data extending back over the past seven months, combining indicators on employment, income and personal finances to  better assess the economic situation of individuals.

According to the Bureau of Economic Analysis data, personal income has returned to its pre-pandemic trend after moderately decreasing since May, while the personal savings rate remains well above its average in 2019 prior to the pandemic.

But this analysis finds that the share of Americans unable to pay their households’ basic expenses for a full month increased in November for the third consecutive month to 25 percent  of all Americans. The timing of the onset of Americans’ weakening finances corresponds to the expiration of federal supplemental unemployment insurance benefits at the end of July.

These findings are directly relevant to the ongoing discussions regarding a second round of federal stimulus aid to unemployed workers. Economists and market commentators have questioned why savings, income and spending data have not weakened more sharply in the wake of the expiration of Federal Pandemic Unemployment Compensation at the end of July. This analysis identifies the extent to which Americans’ finances have weakened since July.

In addition to their policy relevance, these findings indicate the need for firms and financial institutions to be increasingly concerned about consumer delinquencies and defaults. On a more optimistic note, the finances of most higher-income households remain strong, which should act as a tailwind to consumer spending throughout 2021.

A growing share of Americans lost pay or income in November

Unlike weekly measures of initial claims for unemployment insurance, these numbers reflect the total number of American adults who lost pay or income in the past week, regardless of whether or not they filed a claim. This data also avoids lags due to backlogs in processing UI claims.

These increases in income losses are likely to drive high-income Americans to cut back on discretionary spending through the end of the year. However, as discussed later in this analysis, high-income Americans have maintained elevated levels of savings relative to their recurring basic expenses, so spending categories like housing, transportation and food and beverage are unlikely to see significant changes from this consumer segment in the near future. 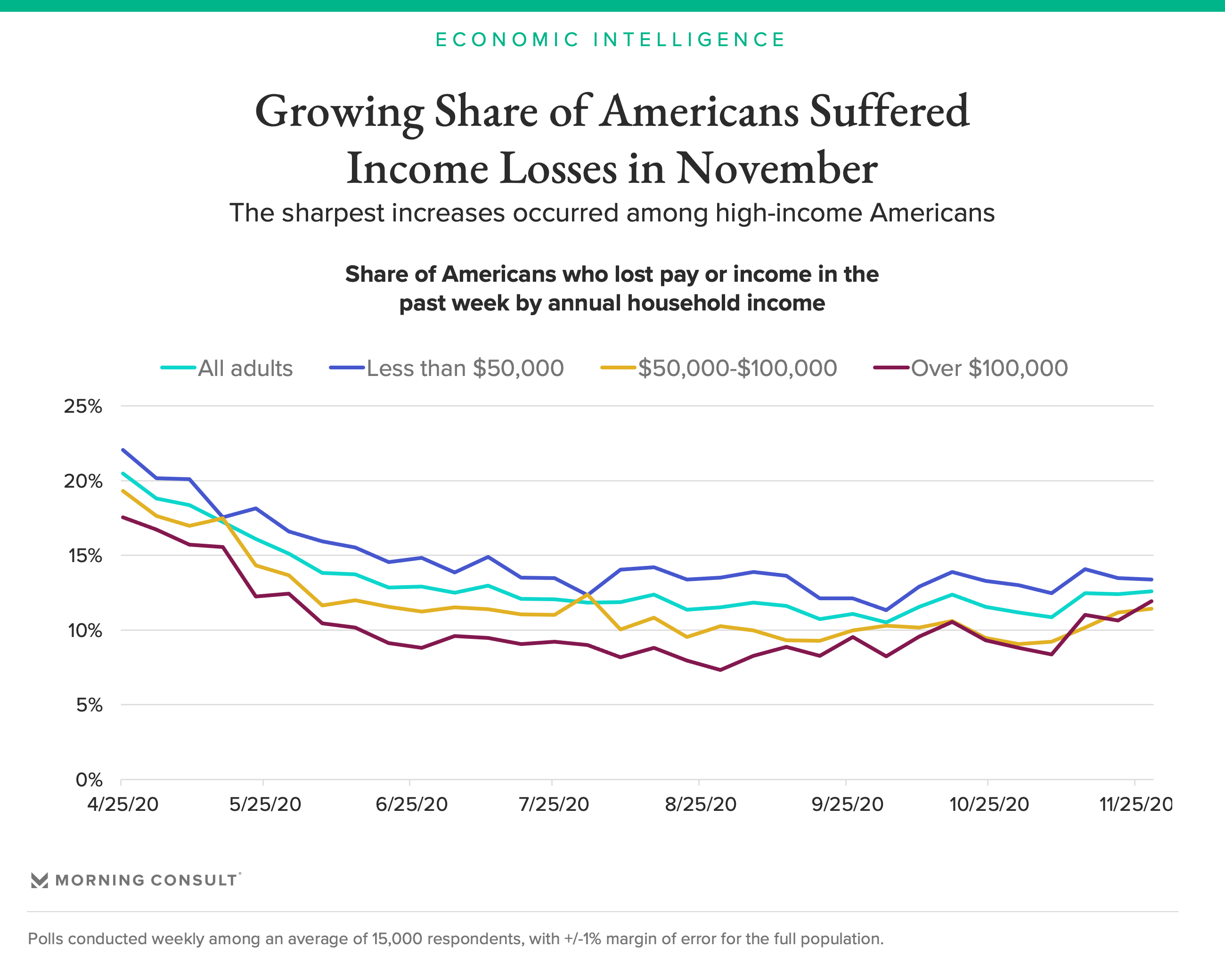 Over the summer, state and federal programs provided Americans with supplemental income in the form of stimulus checks and unemployment insurance benefits to offset their lost income. As those benefits expire, the ability of Americans to make their payments grows increasingly dependent on their employment income and savings. 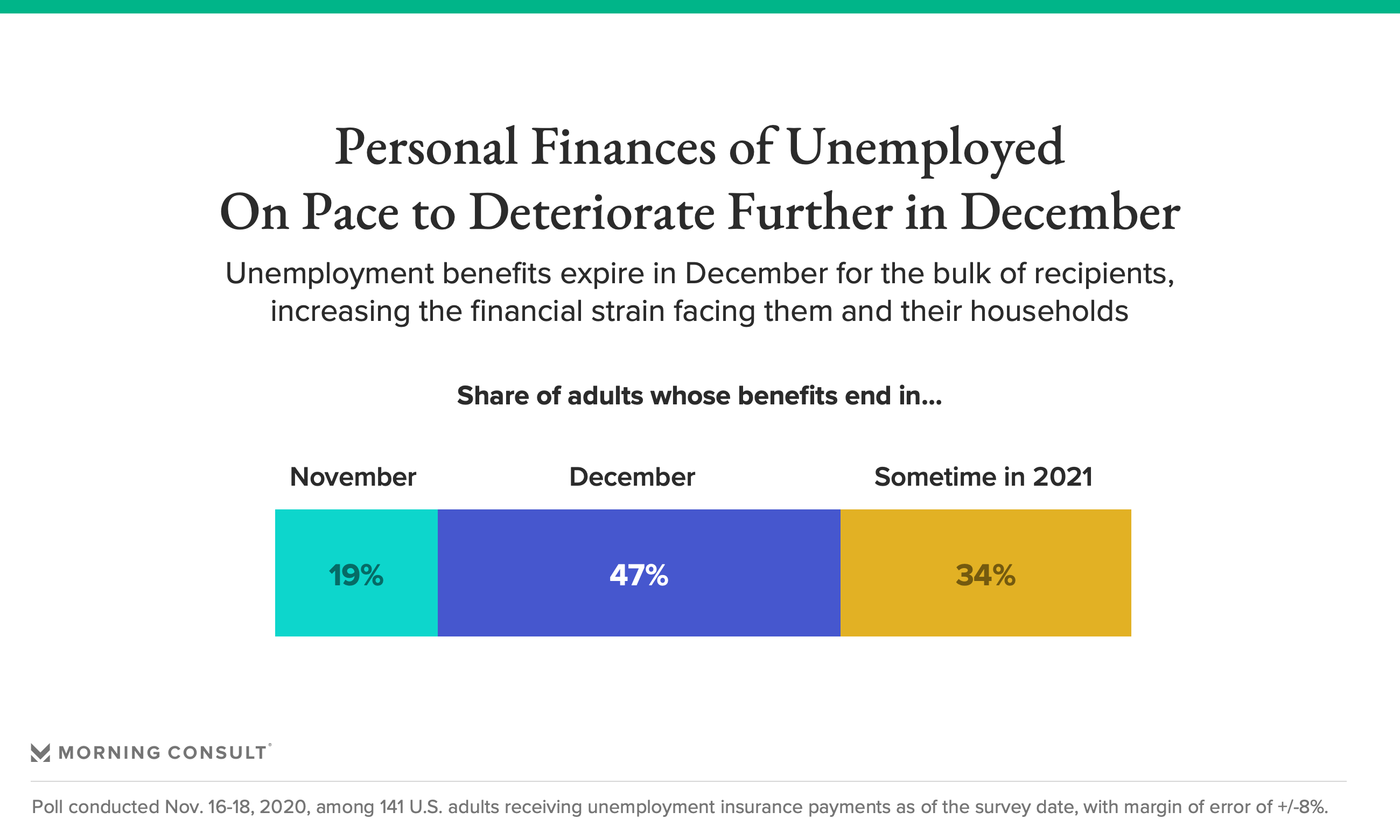 The expiration of the Federal Pandemic Unemployment Compensation (FPUC) in July provides some indication as to how Americans’ finances are likely to evolve at the end of December without additional fiscal aid. As of August, roughly half of unemployed Americans were unable to pay for their basic expenses using their unemployment insurance checks, forcing them to either draw on their savings or take on additional debt. If unemployment benefits expire at the end of December for 66 percent of all current recipients, savings are likely to be further depleted starting in January. 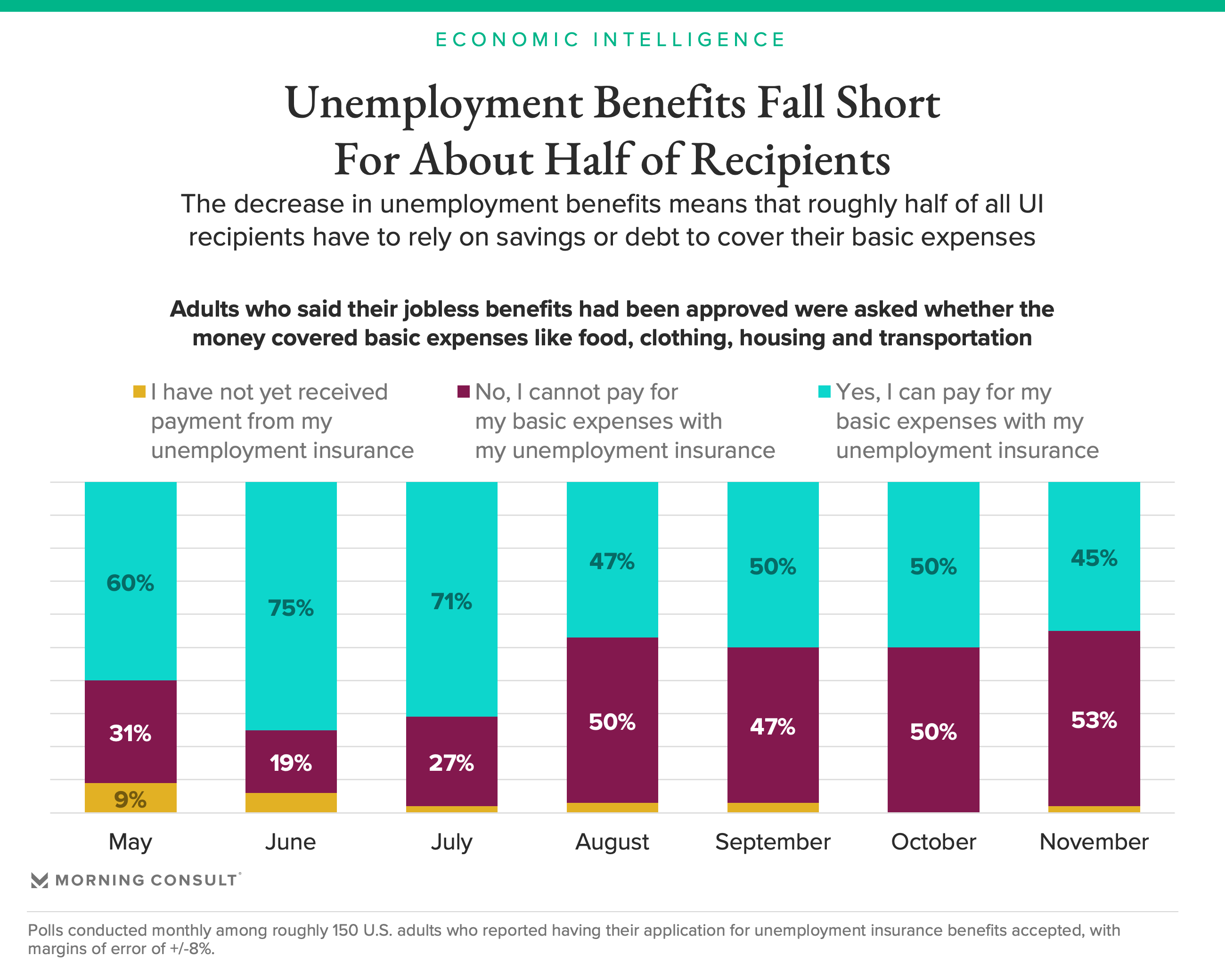 Income anxieties regarding the future are also on the rise

This data also helps explain why consumer confidence did not dramatically increase following the positive news regarding the coronavirus vaccines. While the economy may improve six to eight months from now once the vaccine is broadly distributed, a growing share of American workers are worried about their incomes over the next four weeks. 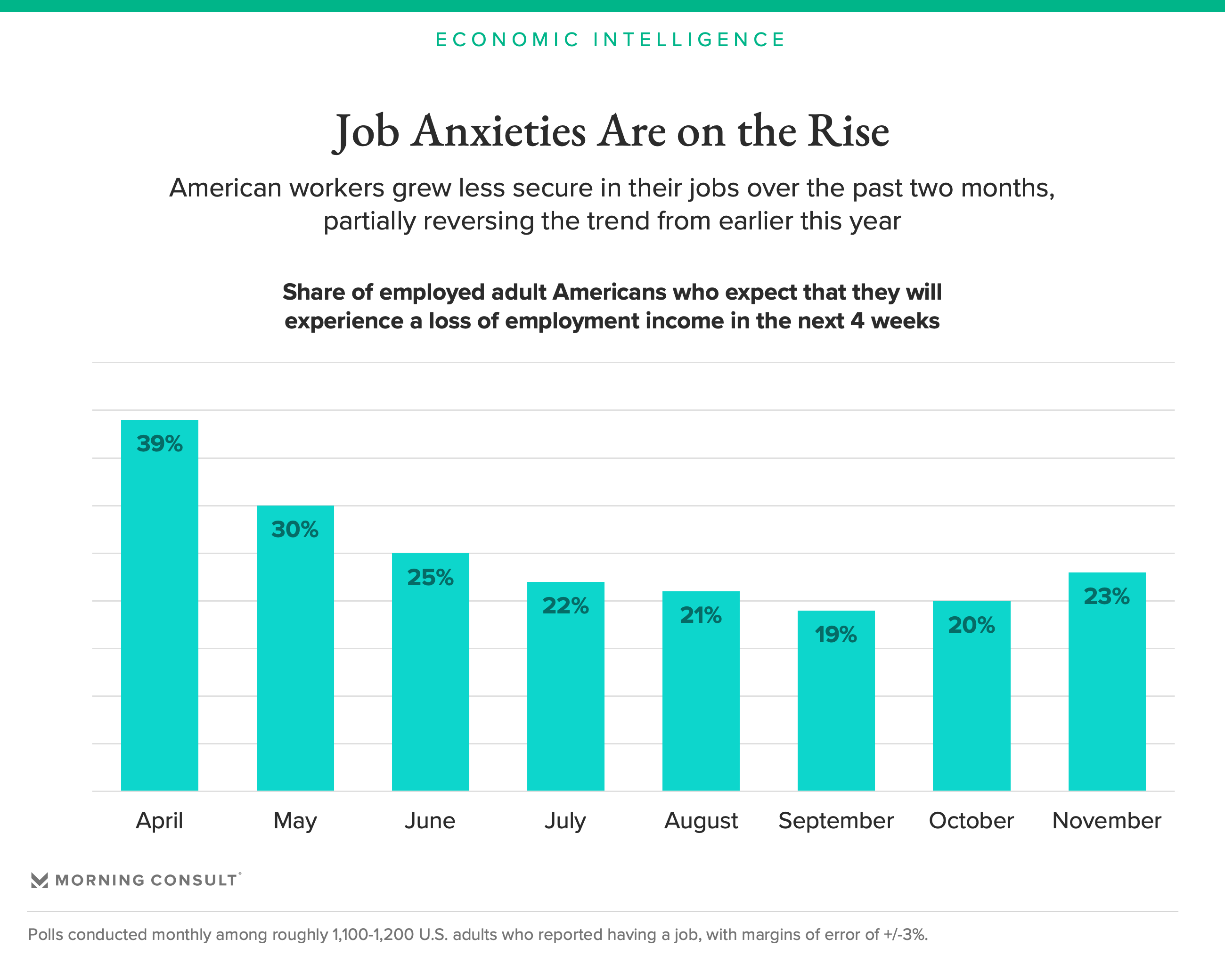 Americans’ finances are deteriorating across the income spectrum

This data provides a picture of the adequacy of savings relative to households’ basic expenses. Whereas data on the savings rate or total savings can mask vulnerabilities within certain segments of the population, a large change in savings for a small number of Americans does not meaningfully influence the values in the chart below.

There are pockets of emerging weaknesses in households’ finances, particularly among Americans with $50,000 to $100,000 in annual incomes. If these Americans were to lose their sources of income, it is unlikely that they could cut back on their basic expenses fast enough to avoid delinquencies since consumers are unable to rapidly decrease expenses on things like housing and car payments. 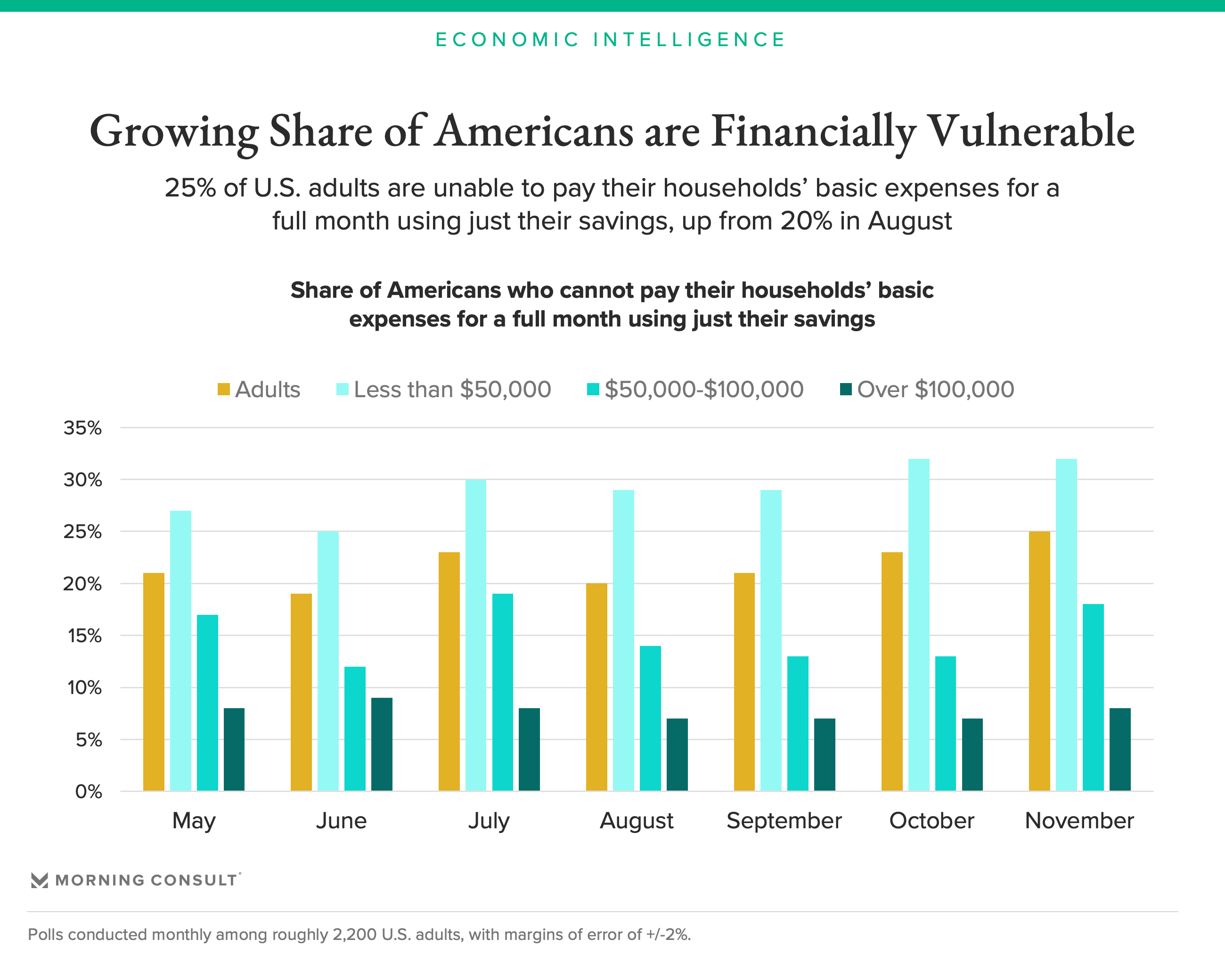 Many higher-income Americans remain insulated from future financial and employment shocks. Forty-two percent of Americans living in households with annual incomes over $100,000 can survive on their savings for at least six months. In other words, even though losses in income among this group increased in November, there were no material changes in their financial strength.

The financial strength of high-income Americans relative to their expenses since May helps explain the relatively low levels of consumer delinquencies and defaults experienced thus far. These Americans are well-positioned to withstand possible additional employment hardships well into the second quarter of 2021. They are also likely to drive consumer discretionary spending once governments lift restrictions and consumers feel safe again.

Consistent with the prior finding, the total share of Americans able to live off their savings for at least six months decreased in November to 18 percent, down 5 percentage points from the high in October. The drop was strongest among middle-income Americans, where it dropped by 7 percentage points. 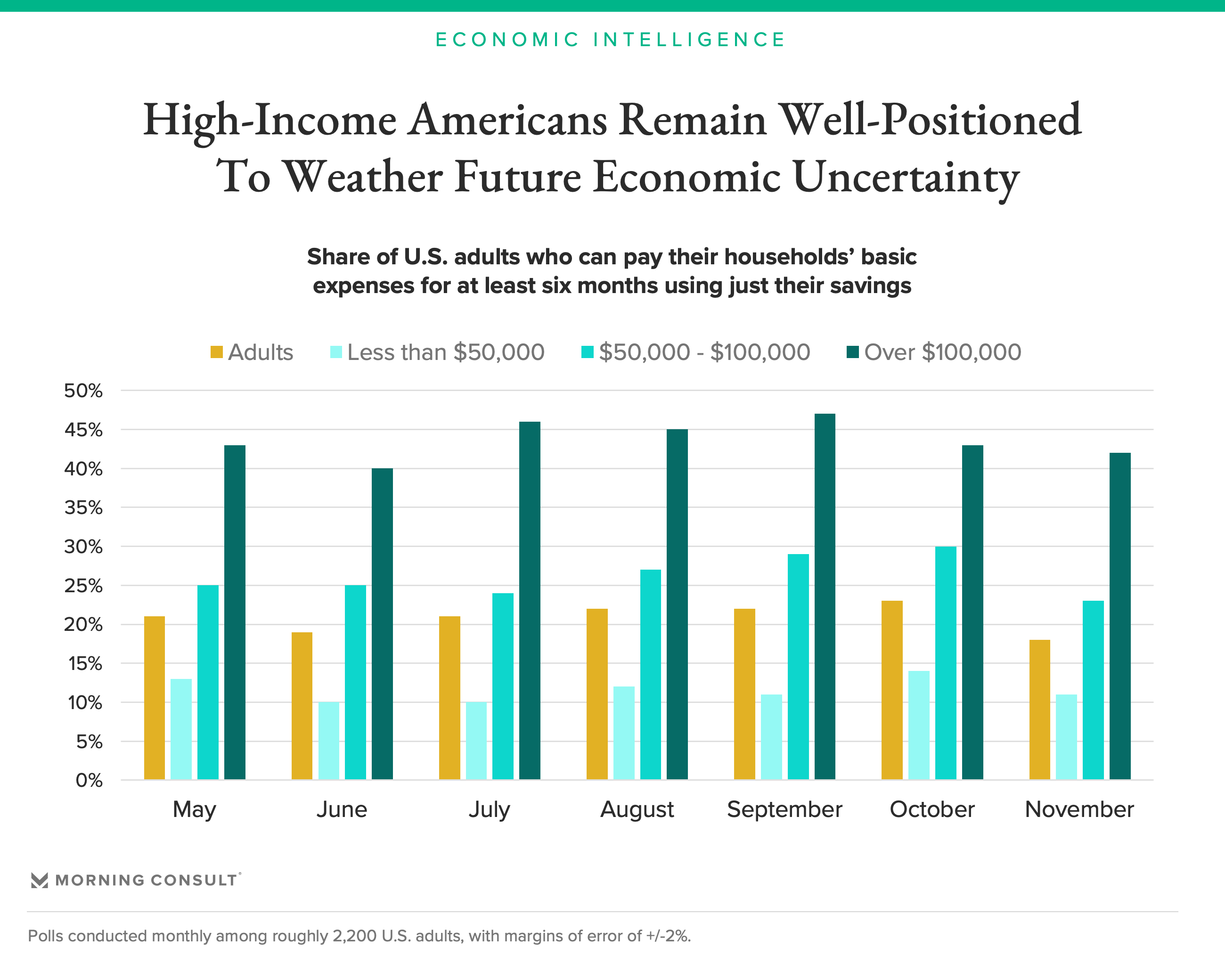