While most countries’ emissions are dropping slowly but surely, the planet’s progress on reducing the concentration of greenhouse gases in the atmosphere so far is too slow to avoid the most catastrophic consequences of climate change. So both scientists and logic itself suggest that the planet will need a two-pronged approach to mitigating the phenomenon: lowering emissions on the one hand, while removing existing carbon on the other.

In the most recent Intergovernmental Panel on Climate Change report, virtually all climate action pathways require removal on the order of 100–1,000 gigatons of carbon dioxide from the atmosphere by 2100 in order to limit global warming to 1.5 degrees Celsius above pre-industrial levels. And in order to do so, a suite of technologies and practices that either extract existing carbon from the atmosphere or offset the emission of additional carbon are viewed as critical.

Some of these carbon removal methods, like reforestation or using cover crops, have long been features of humanity’s relationship with the natural world. Others, however, would involve new technologies built for the express purpose of offsetting industrial carbon emissions or even of directly capturing carbon already in the atmosphere.

But the multifarious nature of carbon removal has presented a problem for the advocates charged with getting policymakers and others fired up about it: Much of the general public is unfamiliar with what the concept entails. According to a recent Morning Consult poll, 73 percent of U.S. adults have heard “not much” or “nothing at all” about carbon removal practices or technologies. 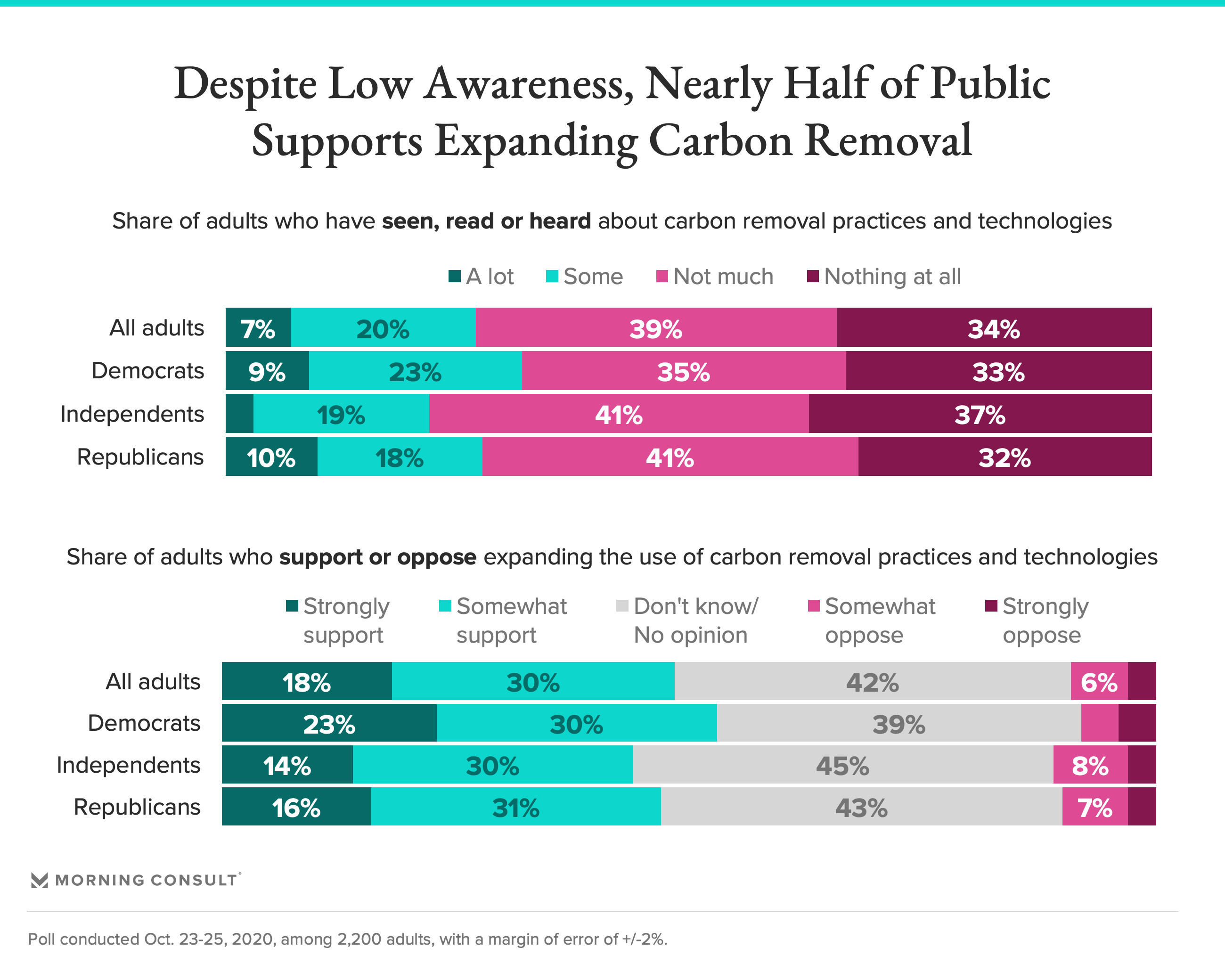 Giana Amador, co-founder and managing director of the nonprofit climate organization Carbon180, said that the juxtaposition of these results implies that even with low information, simply the suggestion of removing carbon from the atmosphere appeals to a public wherein a 73 percent share says they are concerned about climate change.

“People are just really pro climate action, and so if you’re saying here’s something that can help reduce carbon, then that’s the big thing they take away,” Amador said. But the large share who haven’t heard much about carbon removal at all stresses the need for education and communication, she continued, “especially with policymakers, businesses and scientists who really do have the capacity to make large-scale change.”

While other energy- or climate change-related surveys often elicit a partisan divide in favorability, Democrats and Republicans support expanding the use of carbon removal practices and technologies at statistically similar rates: 53 percent and 47 percent, with 3- and 4-point margins of error, respectively. 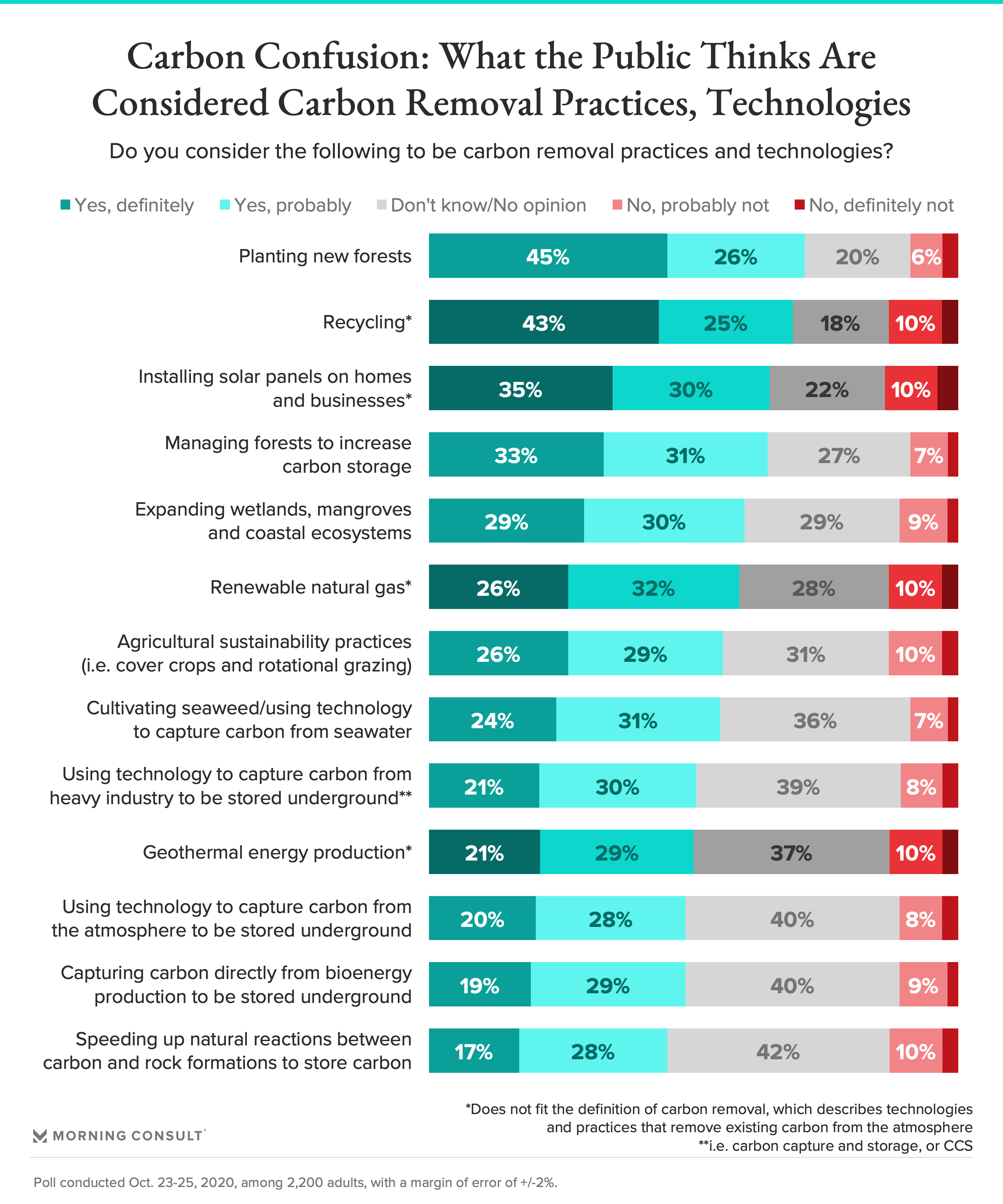 At least 3 in 10 adults said they didn’t know or had no opinion on whether seven of the 13 listed options were considered carbon removal.

It should be noted that while the terms are similar semantically, carbon removal is distinct from carbon capture, with the former encompassing the latter. Carbon capture and storage involves extracting waste carbon dioxide from point sources such as power plants or industrial factories and transporting it to a storage site, a process that tends to have support from the fossil fuel sector because its use minimizes emissions while allowing the continued use of coal and other resources.

Asked how to disambiguate carbon removal for the public, Dr. Holly Jean Buck, assistant professor of environment and sustainability at the University at Buffalo, said the main point to clarify is the difference between removals that offset emissions and additional removals. The former involves removing carbon at the point of emission, such as carbon capture and storage. And the latter encompasses less targeted removals, like those achieved by planting new forests, practicing sustainable agriculture or even using newer technologies to capture carbon directly from the atmosphere.

“I think we need separate targets,” Buck said. “No wonder the public is confused; I feel like experts are confused about this, too.”

One of the potential causes for this inconsistency is that carbon removal has a broad coalition of stakeholders, Buck said, which includes everything from marine- and ocean-based sectors to the oil and gas industry to regenerative agriculture. “It’s not like they’re aligned in some formal way,” she said.

There is no coalition or association uniting various stakeholders or recommending easily communicable language to describe carbon removal; Carbon180 is one of the only organizations devoted to the practice.

Organizational and rhetorical challenges aside, most options for carbon removal are popular with the public. One survey question asked respondents if they support or oppose expanding a litany of specific practices — including both the traditional and the newfangled approaches — and not one saw opposition exceed support. 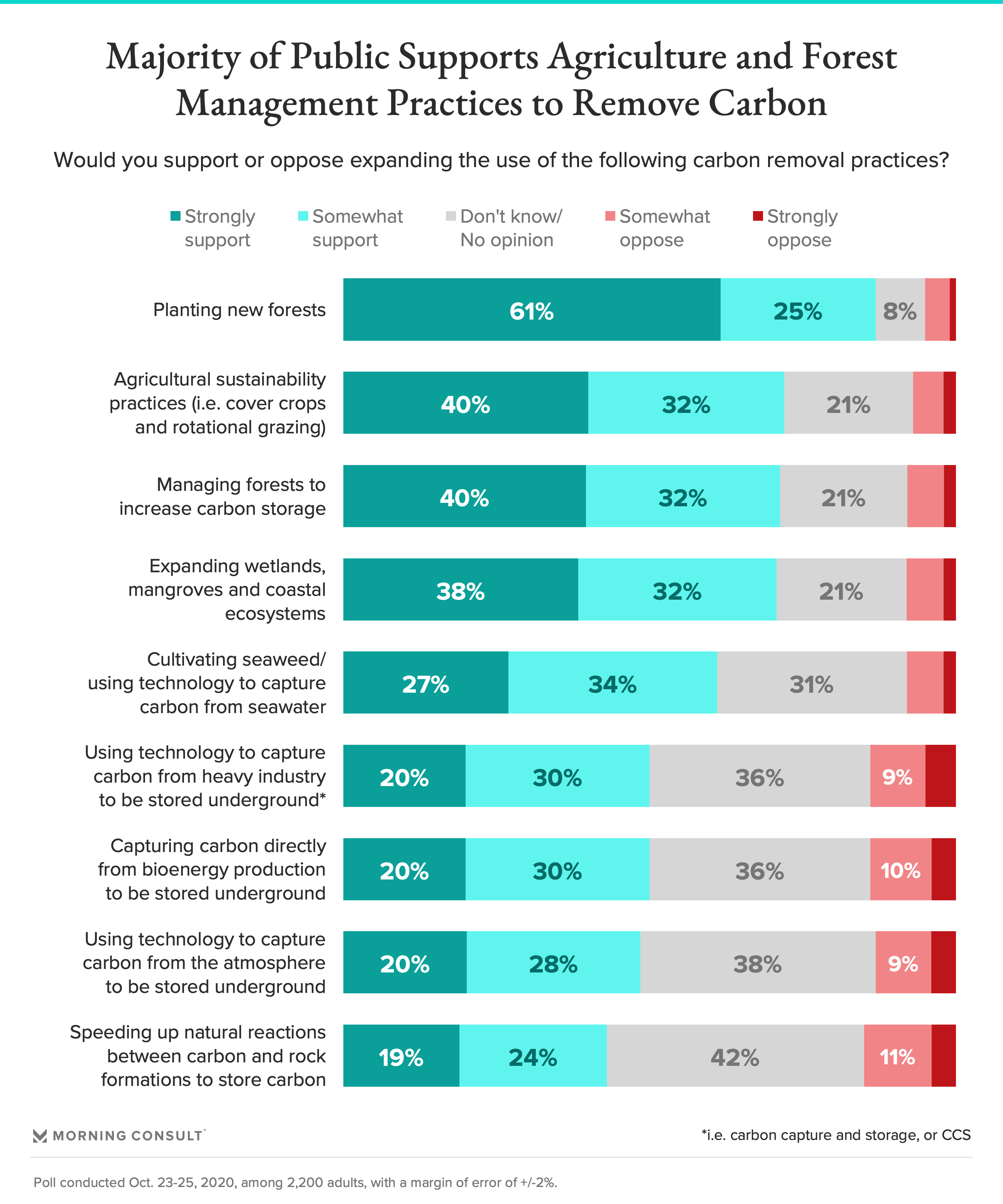 “Folks are more familiar with some of the environmental approaches that have been around for much longer,” said Carbon180 policy director Erin Burns, adding that carbon removal is a “pretty nascent field” that rarely touches the public’s daily life. “I think we see some of that lack of familiarity reflected here.”

The only carbon removal practices that garnered below 50 percent support of their expansion were “using technology to capture carbon from the atmosphere to be stored underground” (i.e. direct air capture) and “speeding up natural reactions between carbon and rock formations to store carbon,” with 48 percent and 43 percent backing, respectively.

Of course, all carbon removal approaches are not created equal, at least when it comes to maximizing their impact. The sequence of prioritizing their implementation will be important as communities everywhere think about how to bring down greenhouse gas concentrations as rapidly as possible, Buck said.

“The first order of things is afforestation because it’s the cheapest and it’s what we know how to do,” she continued, with the caveat that the land demands of planting more forests to mitigate carbon emissions are high and available space is finite. “But then I also think that we need to be scaling up industrial carbon removal, both for point source capture to decarbonize industry — steel, cement, things like that — and we need some amount of direct air capture, too.”

Related: Just One Major Utility on Track to Meet Biden’s Goal of Carbon-Free Power by 2035

It’s a complex approach to easing the planet’s carbon overload, and one not helped by the public’s apparent lack of knowledge on the subject.

“You can’t look at carbon removal by itself because it intersects with food systems, with energy, and with waste management, and we’re not really trained to think in these systems structures,” Buck said. “But we have to learn.”

Despite its low profile so far, carbon removal’s advocates suspect that its day in the sun might be coming. Burns describes her outlook on President-elect Joe Biden’s approach to carbon removal as “hopeful,” especially given his commitment to rejoin the Paris climate agreement. Noah Deich, executive director and co-founder of Carbon180, has taken time off from the organization to serve on Biden’s transition team for the Department of Energy.

And even in Congress, where partisan gridlock has previously been a staple of energy and climate policymaking, carbon removal’s flying below the radar seems to have been a feature rather than a bug, allowing the practices to largely avoid being categorically cast aside by either party.