Apps Were Supposed to Be COVID-19 Contact Tracing’s Secret Weapon. So Far, Only 14% of Adults Are Using Them 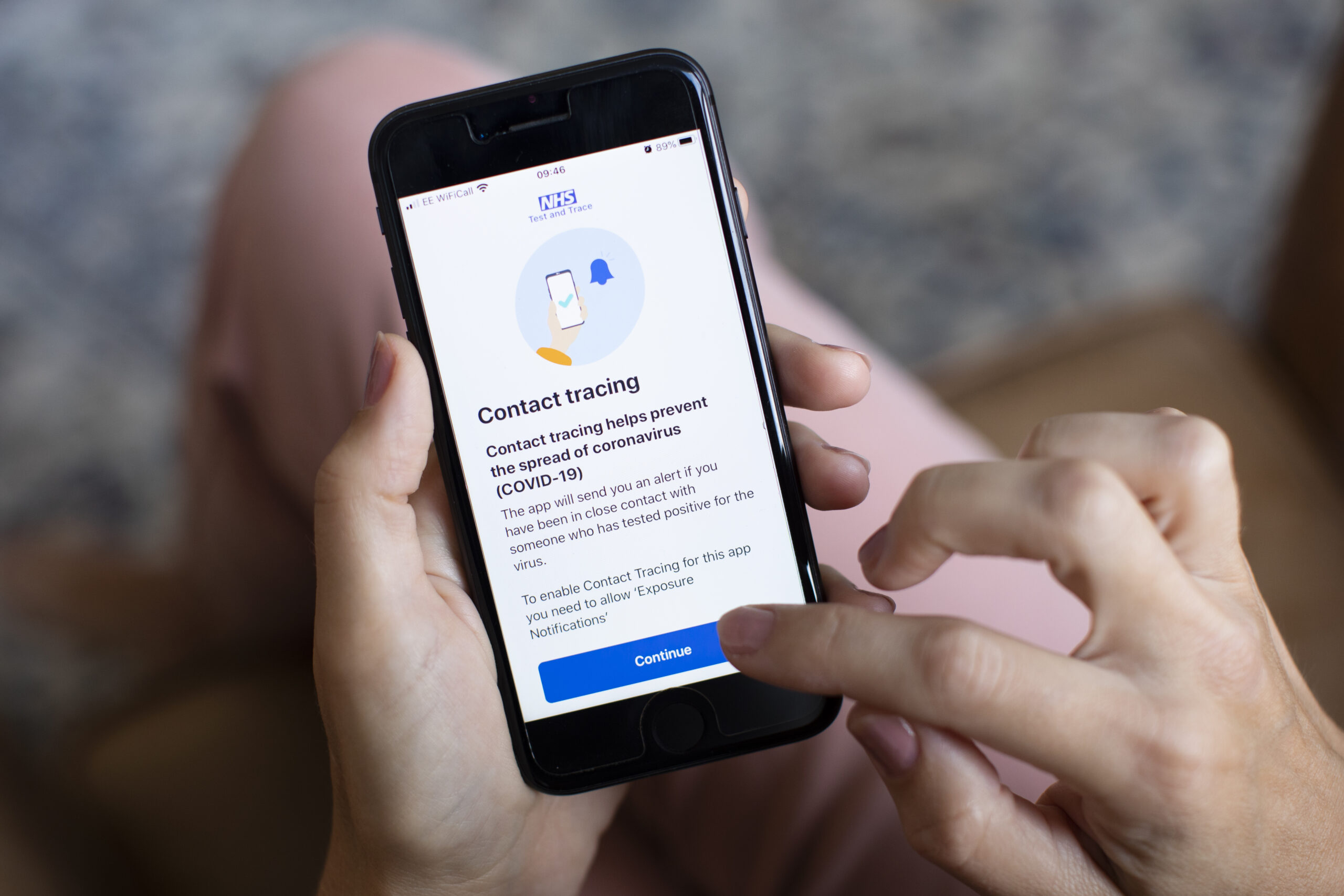 In this photo illustration, the UK governments new test and trace application is displayed on a handheld device, on September 24, 2020 in London, England. The new NHS Covid-19 contact tracing app was available to download from today. (Dan Kitwood/Getty Images)
By Sam Sabin

On Thursday, California will become the largest state to unveil a COVID-19 exposure notification app built through a partnership between Google and Apple Inc., allowing residents to be notified on their phones if they’ve been in close proximity to anyone who voluntarily reports a positive test result.

“This is 100% private & secure,” Democratic Gov. Gavin Newsom said in a tweet announcing the new initiative.

Despite Newsom’s reassurances, new Morning Consult polling suggests that California will surely hit the same issues that the other 21 states with their own contact tracing apps have: adoption and privacy concerns.

Related: Amid Unrelenting Surge in Cases, More Than 1 in 2 Adults Say the Worst of COVID-19 Hasn’t Hit Yet

According to a Morning Consult survey this month among 2,200 U.S. adults, just 14 percent said they were currently using a COVID-19 exposure notification app on their mobile phone, including apps that they can opt into on their smartphones and those downloaded from government entities. Despite the low number of users, 69 percent of adults said they believe participation in such app-based systems would be either “very” or “somewhat” effective in slowing the spread of the virus and keeping people in their community safe.

Concerns about what personal data is collected and a general lack of awareness seem to be the two largest obstacles standing in the way of widespread adoption: Nearly half (47 percent) of the 1,897 adults who said they weren’t using the apps pointed to concerns about sharing personal information with third parties as a “major reason,” while 24 percent said the same about their unfamiliarity with the technology’s availability.

The survey, conducted Dec. 1-4, has a margin of error of 2 percentage points. 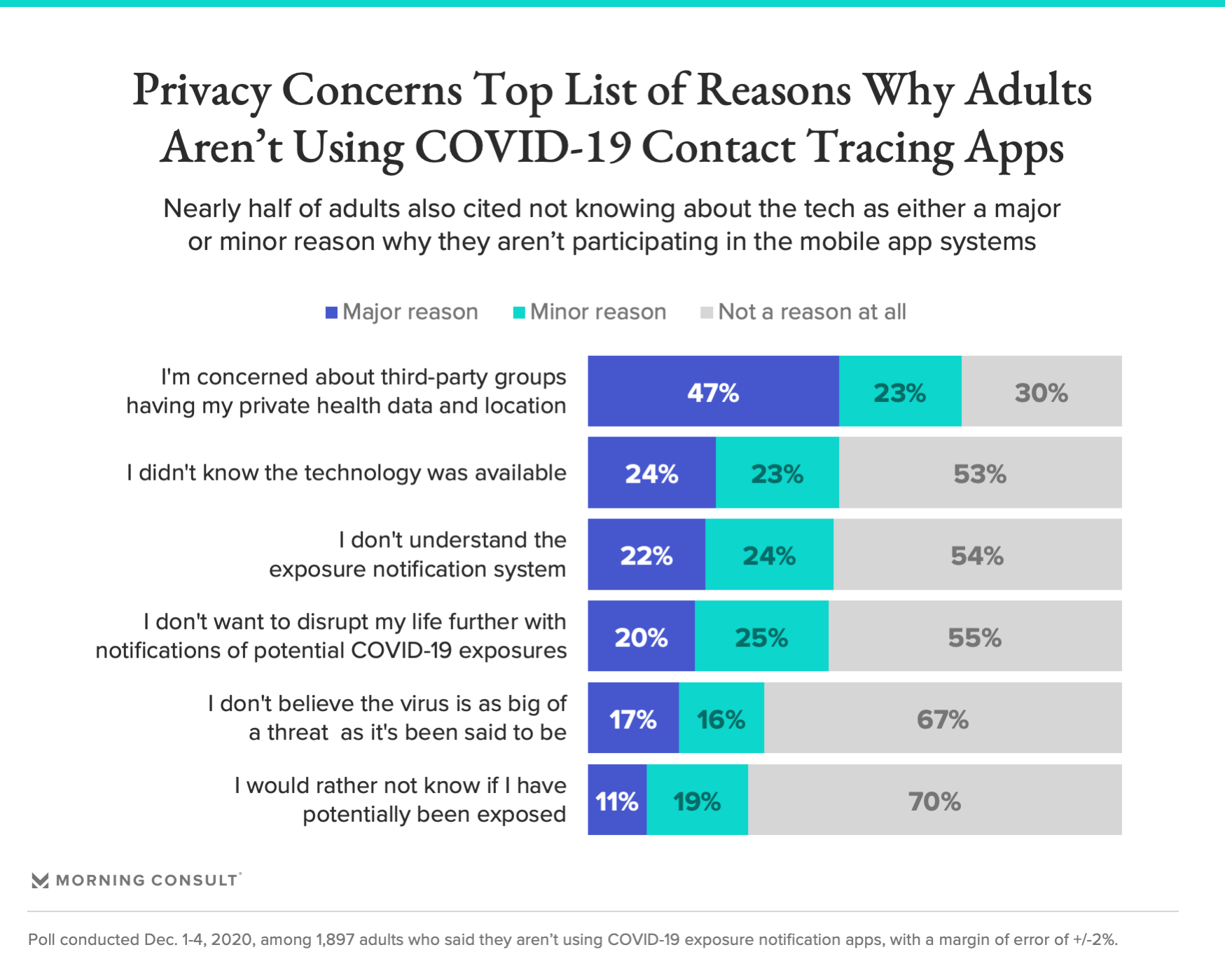 Nine months ago, at the onset of the coronavirus pandemic, Americans turned to technology companies heavily for assistance in tracking and lessening the spread of COVID-19 in the United States by beefing up proposals to find testing sites and track exposure to the virus. But misinformation about what exactly technology companies were working on prompted both high expectations for Silicon Valley’s role in controlling the pandemic, as well as privacy concerns about private-sector companies possibly knowing who has tested positive for the virus.

For example, in March, as the pandemic started to shut down cities, workplaces and schools, President Donald Trump touted Google parent company Alphabet Inc.’s efforts to build a website that he claimed would help the public find available virus screening tests at a time when testing was scarce. Instead, Verily, the Alphabet life sciences unit coordinating the effort, was only in the process of helping testing efforts in Northern California and building an information hub on Google’s search engine with verified details about the outbreak.

And in April, when Apple and Google first announced their partnership to build contact tracing technologies, confusion abounded over what the two tech giants were planning, with their efforts ultimately rolled out in multiple steps and months apart. The first iteration was an application programming interface that software developers could use to build apps from the ground up on behalf of public health agencies. Months later, in September, the companies rolled out the second part of their plan: a software framework that state officials can plug-and-play to launch their own systems. 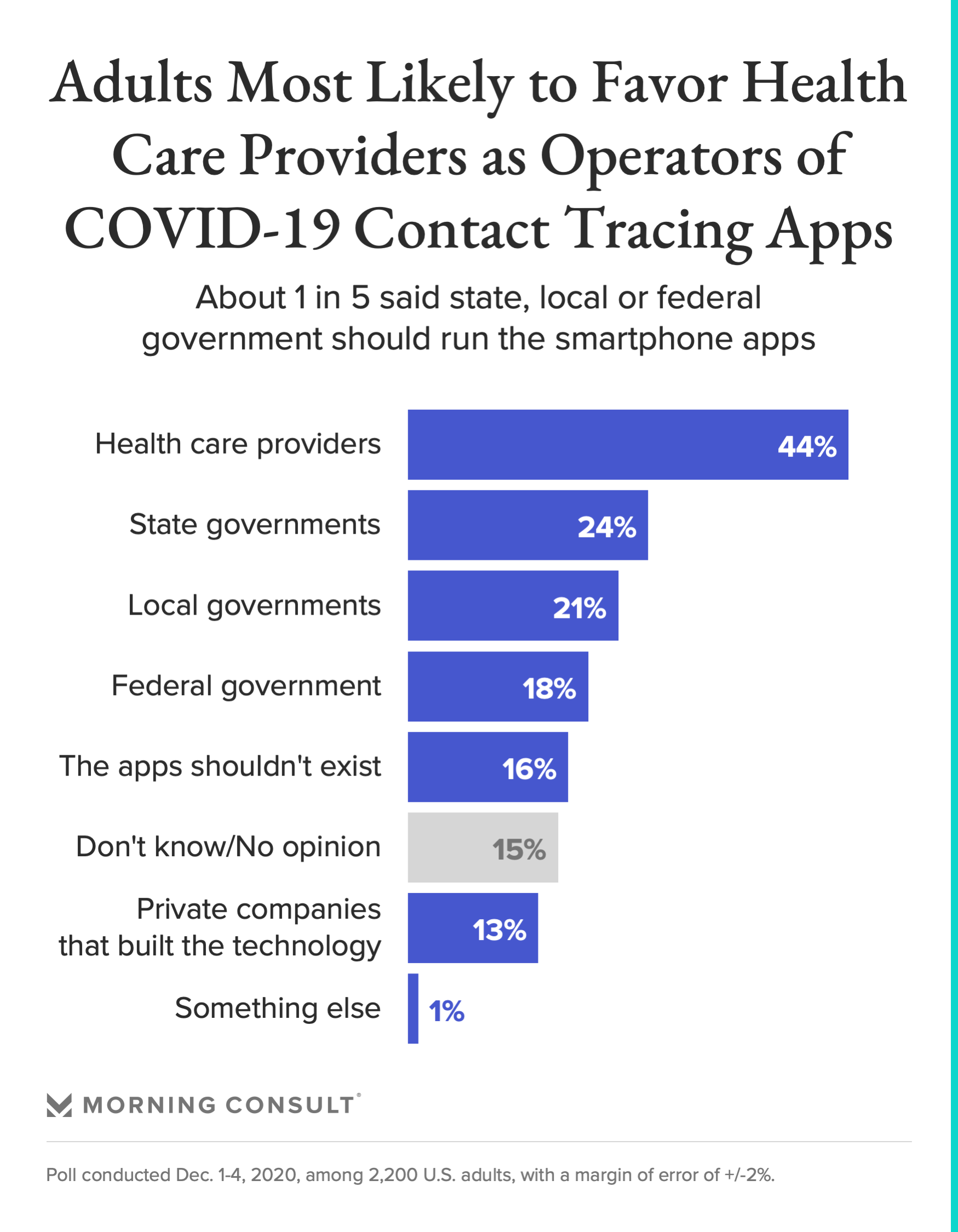 Although nearly half of adults point to privacy concerns as a major reason why they’re not participating in the programs, systems built both by Apple and Google, as well as university researchers, typically don’t rely on a phone’s exact location and instead turn to a device’s Bluetooth signal to determine if someone was near the phone of an exposed person for more than a few minutes. The apps also don’t collect identifying information about those who were exposed, and both Apple and Google have said they will remove their systems once the public emergency ends.

However, health care providers and government entities remain the most trusted bodies to operate contact tracing apps: 44 percent in the Morning Consult survey said health care providers like hospitals and primary care physicians should be operating these mobile apps, while 24 percent said the same about state governments. Twenty-one percent said local governments should run the systems, and 18 percent chose the federal government. Private companies that built the apps came in at the bottom of the list at 13 percent.

Respondents were slightly more comfortable with sharing their location data — including where they’ve traveled — when the intent was to track the spread of the coronavirus. Thirty-two percent said they were “very” or “somewhat” comfortable sharing such data for those purposes, compared to 23 percent who said the same about sharing their location data so the government could track citizens for general, undefined purposes.