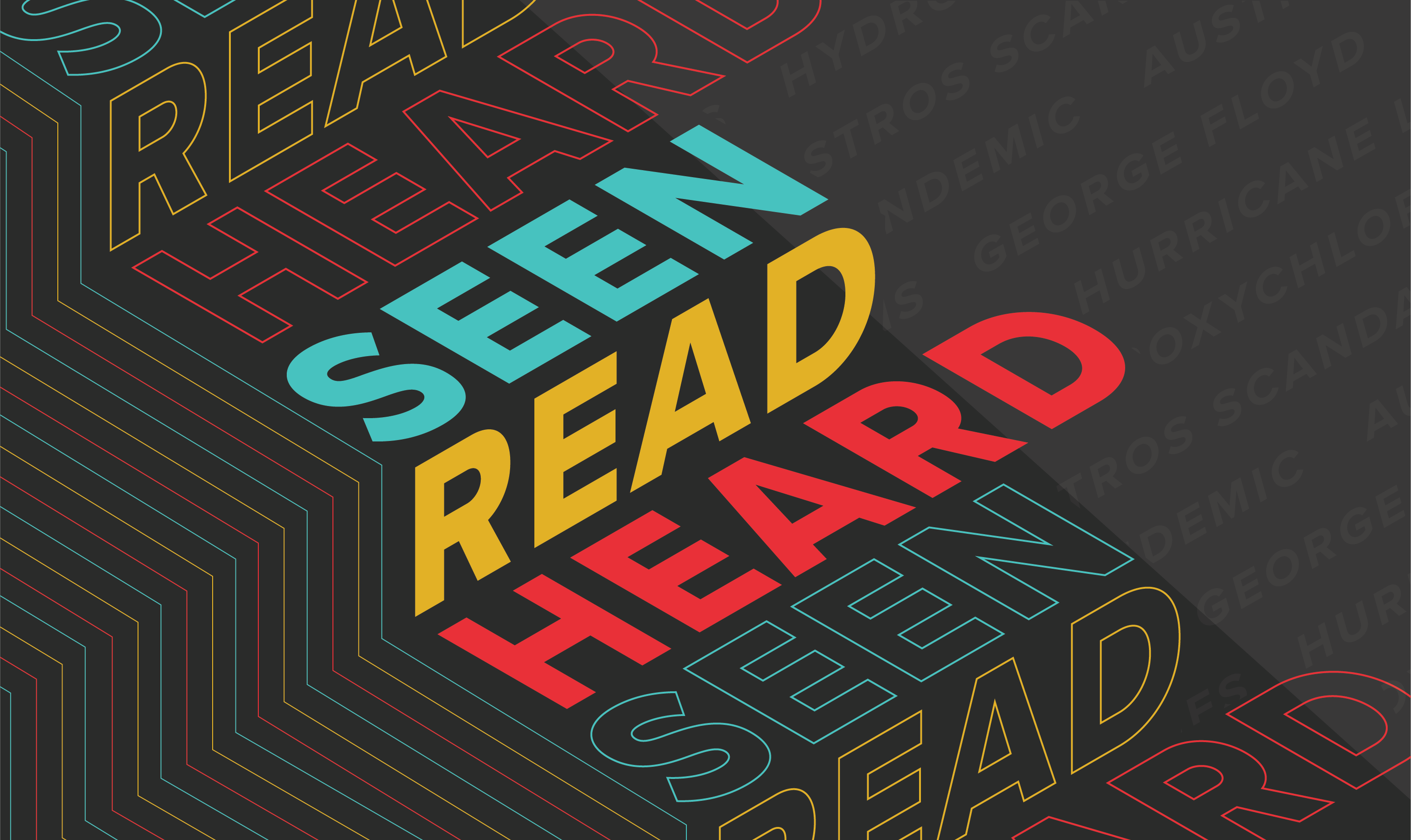 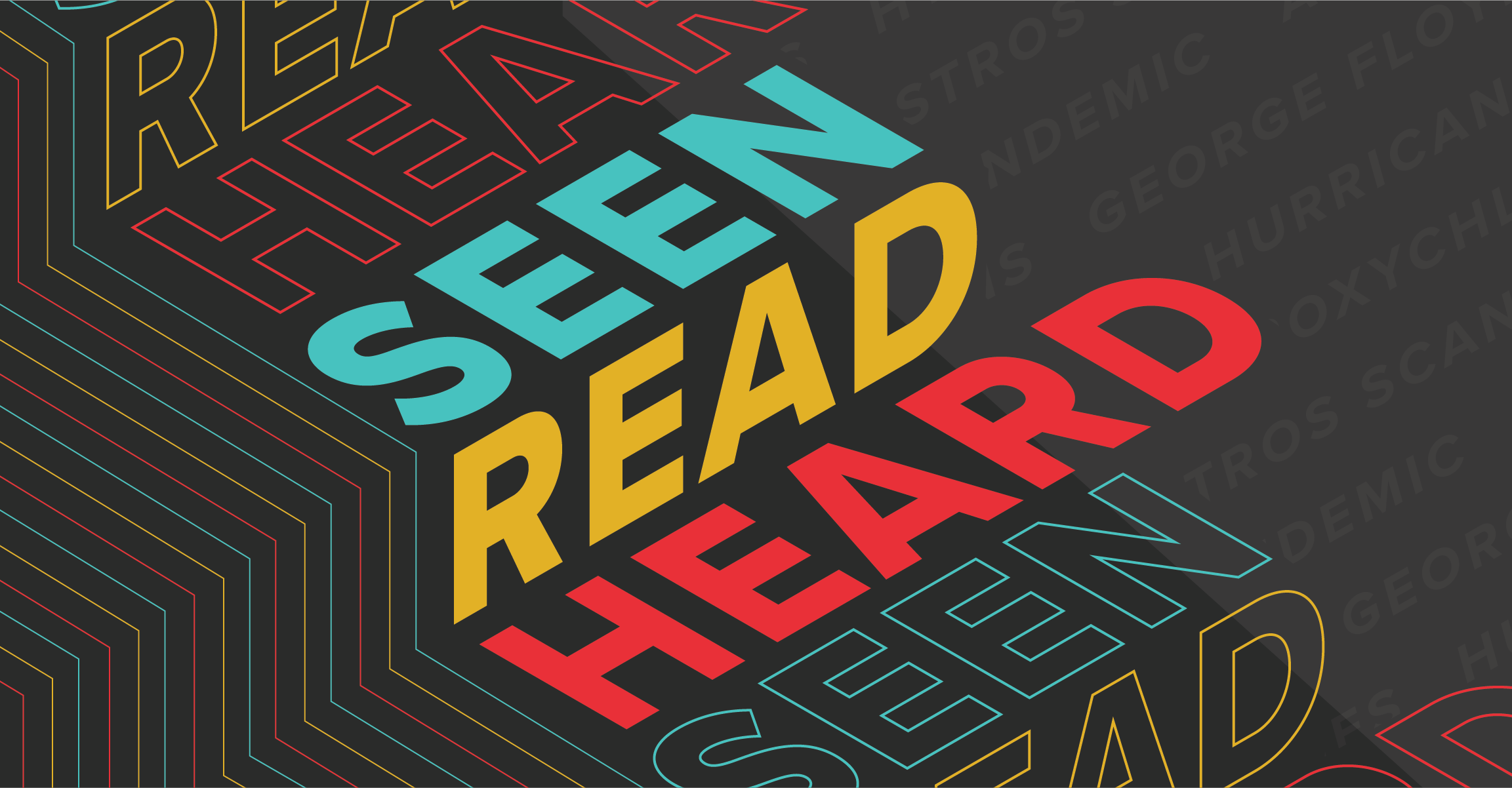 Pandemic, Politics and Protests: Analyzing the News That Broke Through in 2020

Polling captures the events that had real-time resonance with voters

America’s near-war with Iran and the divisive Washington fight over whether to remove President Donald Trump from office would be enough to define most years. But they are mere footnotes in 2020, which came to be defined by a resurgent civil rights movement and a deadly global pandemic that upended a pivotal presidential election.

Throughout the year, Morning Consult surveyed roughly 100,000 registered voters about how much they’d seen, read or heard about more than 370 events that drove the news at the time of weekly polls. This analysis — which measures the salience of events by looking at what voters contemporaneously said they had heard “a lot” about — is based on a curated list of 132 events spanning key storylines in politics, business, sports and entertainment. (See the interactive here.) 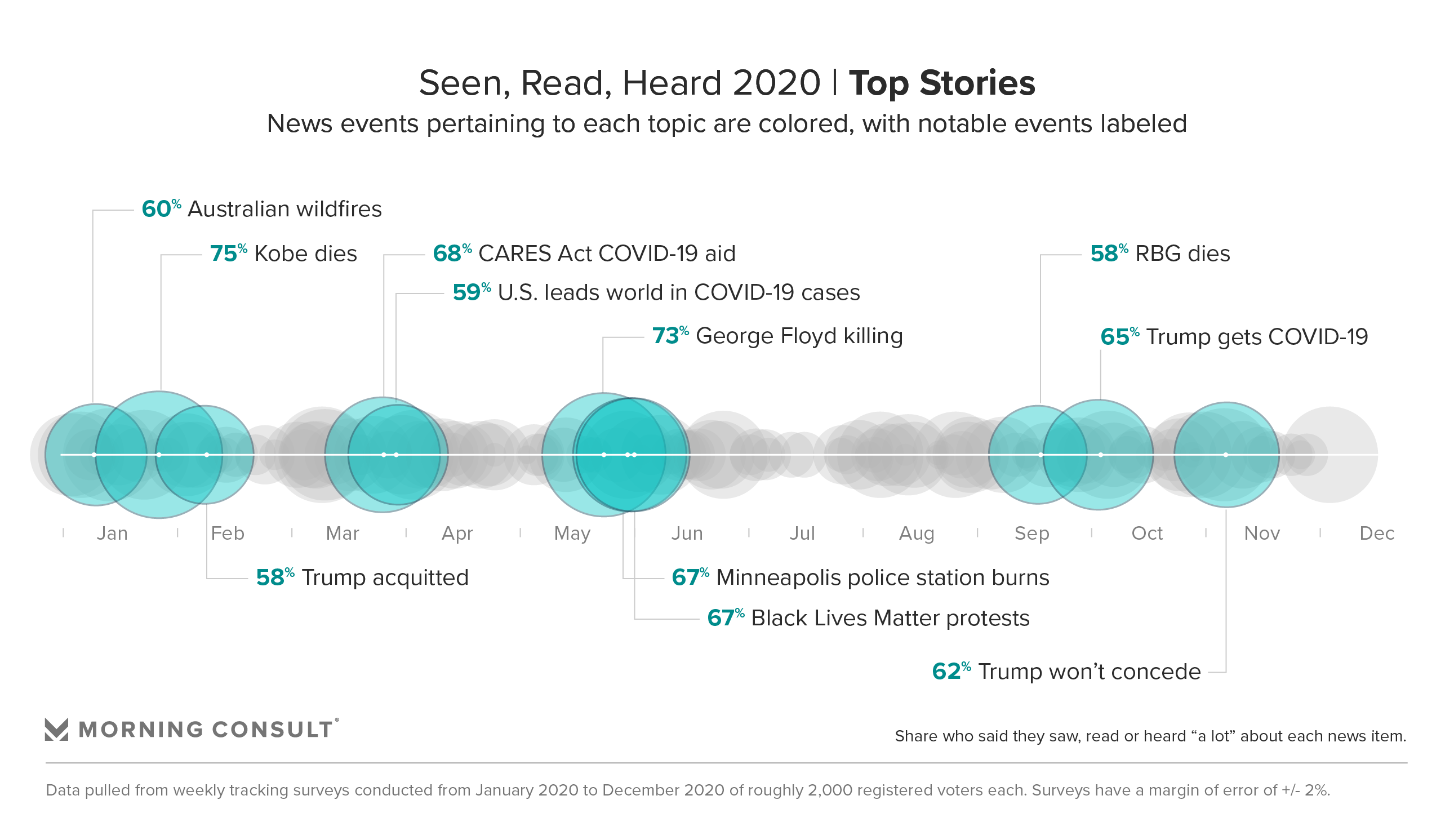 In terms of real-time resonance, the January death of basketball star Kobe Bryant, his daughter and seven others in a California helicopter crash topped the list of stories: 75 percent of voters said they heard a lot about the fatal incident in Calabasas, Calif. That news was followed on the list by the Memorial Day killing of George Floyd by Minneapolis police, which broke through to 73 percent of voters.

Other far-reaching stories of 2020 include Trump’s COVID-19 diagnosis and his refusal to concede the election, Supreme Court Justice Ruth Bader Ginsburg’s death and the World Health Organization’s declaration of the coronavirus as a pandemic. 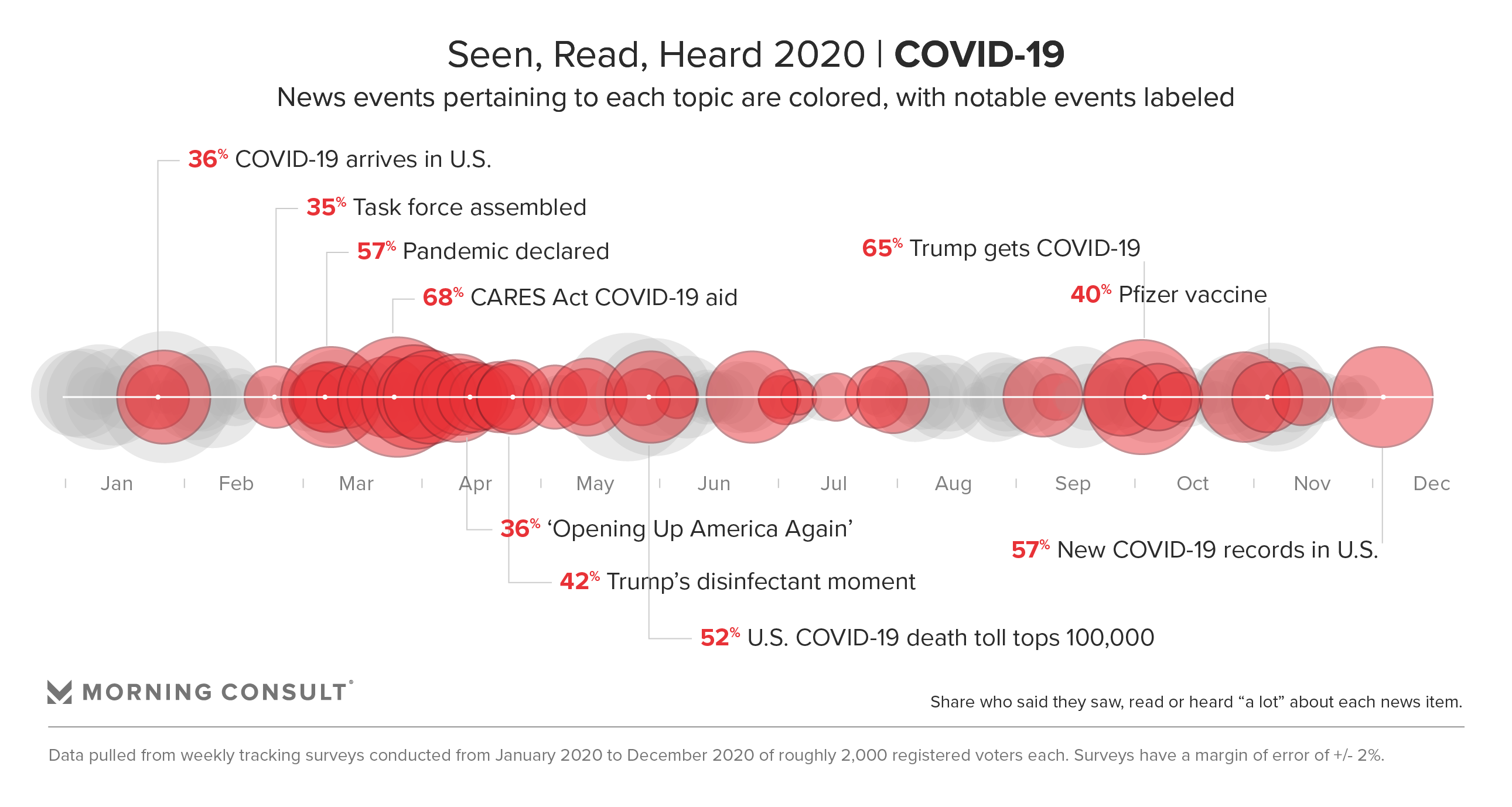 The coronavirus had been raging across America for months by the time one of its most salient news events broke: The president and first lady’s positive diagnoses. Almost immediately after it happened, 65 percent said they’d heard a lot about it, with hardly any variation by party. The total was just short of the 68 percent who said the same of Congress’ late March passage of the CARES Act, a $2.2 trillion coronavirus stimulus bill.

The virus was on Americans’ radars early on. In late January, when nearly 6,000 cases worldwide had been confirmed, reports that the coronavirus had spread from China to the United States and other countries resonated with 53 percent of voters. Washington’s subsequent moves to respond, such as the assembly of a White House coronavirus task force in February and the early March passage of roughly $8 billion in emergency congressional aid, garnered less attention.

Increasingly urgent messaging from governing entities pushed the virus back into the forefront of most voters’ minds in mid-March: 57 percent said they’d heard a lot about the WHO’s declaring coronavirus as a pandemic and 54 percent heard a lot about Trump’s national emergency declaration, with more awareness of the former among Democrats and higher awareness of the latter among Republicans.

Throughout the year, Republicans generally were more likely to have heard about news that was favorable to the president and his party’s cause, such as the White House’s April guidelines for governors to reopen the economies in their states. Republicans were also slightly more likely than Democrats to hear about Trump’s halting of U.S. funding to the WHO, which came amid attacks on the global health group that tainted its popularity.

The historic pandemic overshadowed many 2020 narratives, but not the resurgent Black Lives Matter movement, which captured voters’ attention following Floyd’s death. Protests and demonstrations in dozens of U.S. cities – coupled with images of people looting stores and setting fire to a Minneapolis police station – quickly broke through to 67 percent of voters.

Other incidents involving violence against Black Americans had a smaller impact on voters nationwide. News in early May that authorities in Georgia had arrested two men for the murder of Ahmaud Arbery resonated deeply with just over a third of voters, similar to the share who said they heard “a lot” about a Kentucky grand jury’s September decision to indict one of the three Louisville police officers involved in the death of Breonna Taylor. News out of Kenosha, Wis., in August that a police officer shot Jacob Blake in the back caught the attention of 51 percent of voters at the time, including 60 percent of Democrats and 40 percent of Republicans.

Trump’s constant presence in the news cycle for the past few years and penchant for generating negative headlines has driven a trend in Morning Consult polling that continued in 2020: Democratic voters generally reported hearing more about political or politics-adjacent news events than their Republican peers. 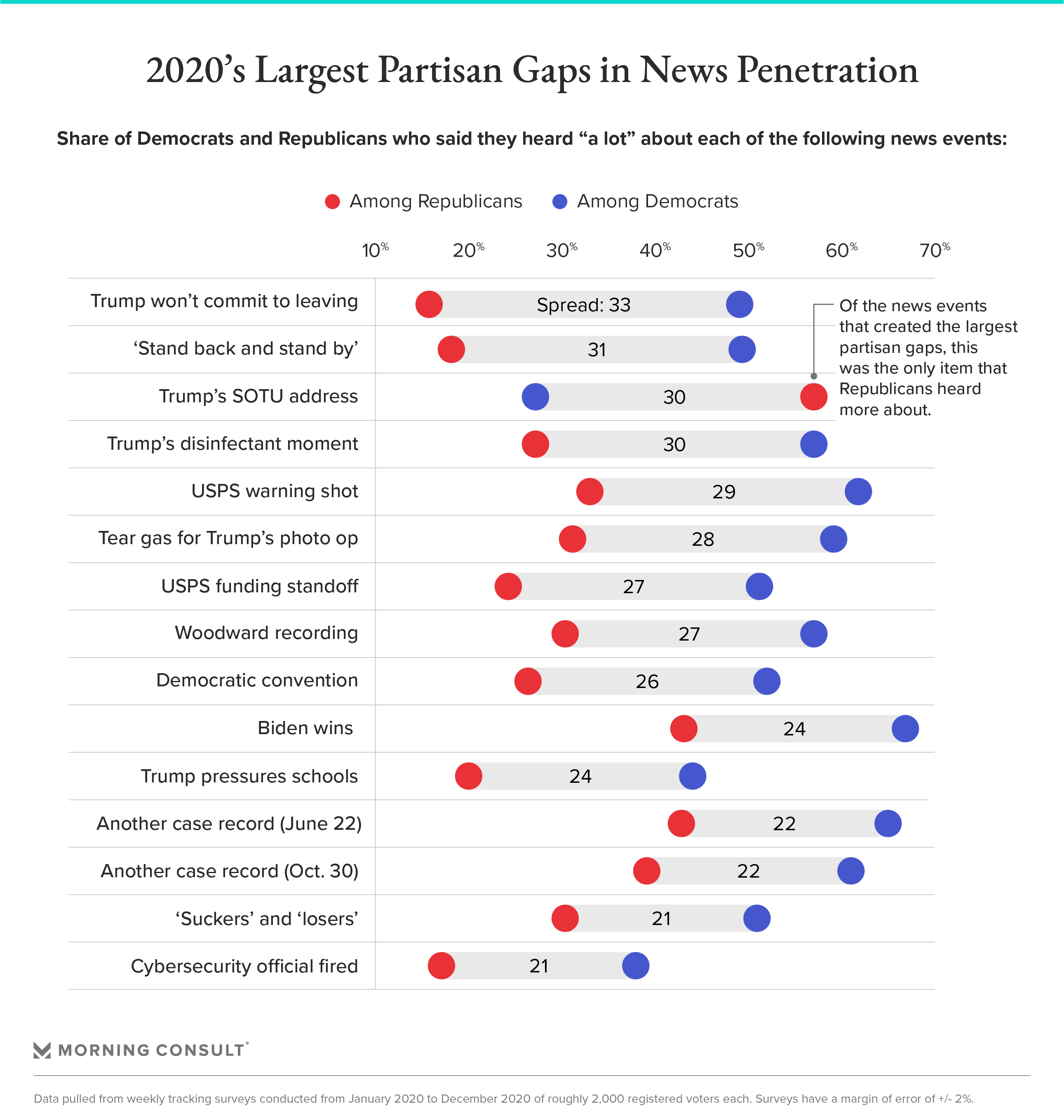 For example, while there were not significant gaps on issues like the corporate response to the Black Lives Matter protests or the summertime calls to “defund the police,” Democrats were much more likely to hear about the striking events of June 1, when police used tear gas to clear protesters from Lafayette Square so that Trump could pose in front of a church near the White House with a Bible. Fifty-nine percent of Democrats heard a lot about the photo op versus 31 percent of GOP voters, producing one of the larger partisan divides of the year.

When it came to news events with the widest partisan splits, Republicans were only more likely to report hearing a lot about Trump’s State of the Union address, as was the case in 2019. Democrats made up the bulk of consumers of news about Trump’s suggestion that COVID-19 patients treat the disease by injecting disinfectant inside their bodies in April, as well as the news that the U.S. Postal Service had informed 46 states and the District of Columbia that it could not guarantee all ballots cast by mail in the presidential election would arrive in time to be counted. 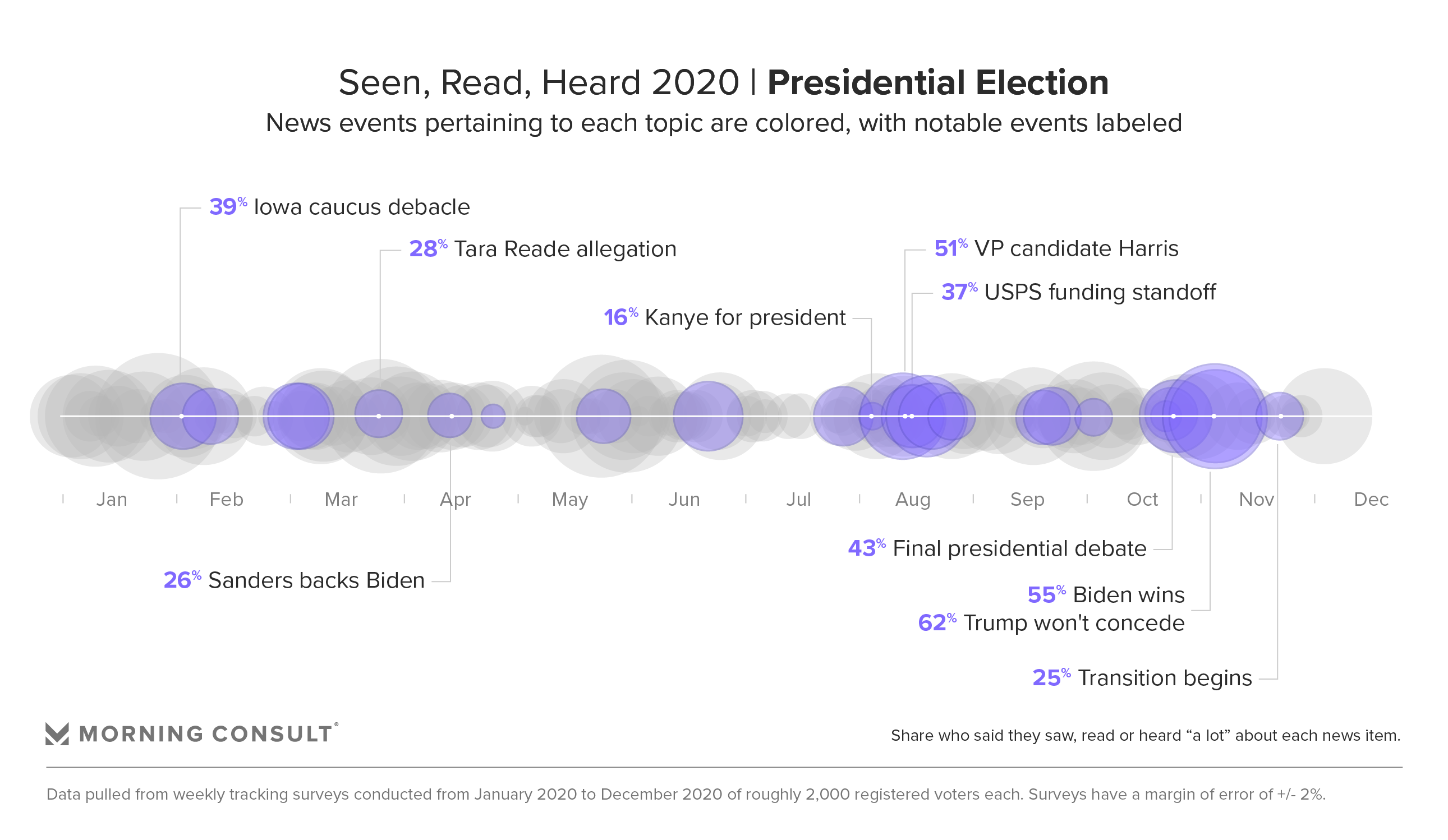 The Democratic Party dominated the early part of 2020’s political news cycle with developments on Joe Biden’s tough road to victory in the party’s primary contests. Given the subject matter, most of the events — such as Vermont Sen. Bernie Sanders’ New Hampshire victory or his and Massachusetts Sen. Elizabeth Warren’s exits and endorsements of Biden — were more likely to break through to the party’s own voters than the electorate as a whole.

Among more than two dozen campaign events included in the analysis, the president-elect’s victory over Trump was eclipsed among the overall electorate only by Trump’s refusal to accept his defeat. The two events produced large partisan gaps: Democrats were 18 percentage points more likely than Republicans to report hearing a lot about Trump’s resistance to accepting the election result and 24 points more likely to hear about Trump’s defeat.

Democrats also heard more about campaign events in general, such as Biden’s pick of Sen. Kamala Harris (D-Calif.) as his running mate and Trump’s overture to the Proud Boys during a debate with Biden, where he told the far-right extremist group to “stand back and stand by.” 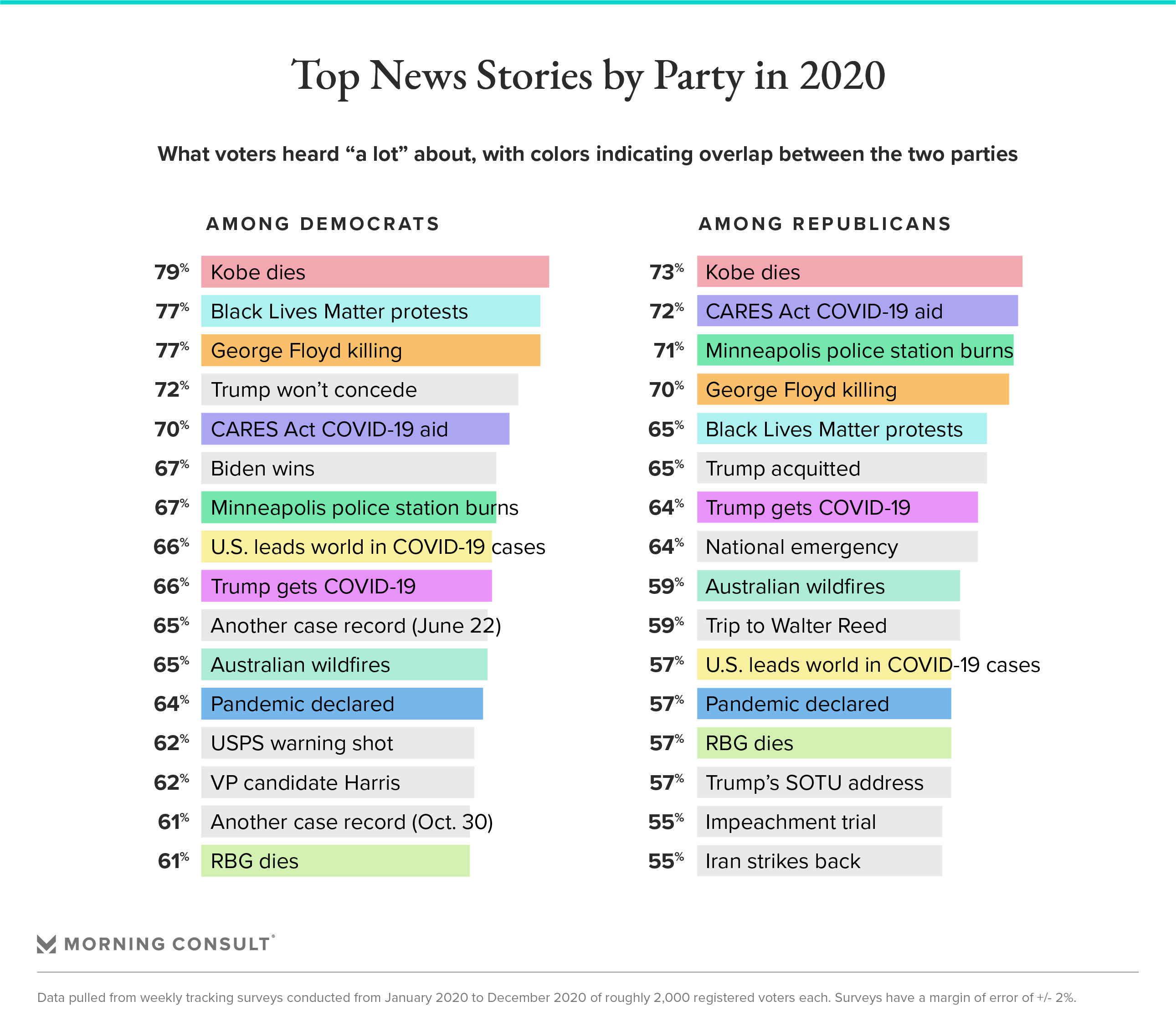 Republicans, meanwhile, were more likely than Democrats or the broader electorate to report saturation of negative stories aimed at Biden, such as allegations by Tony Bobulinski, a former business associate of the president-elect’s son, Hunter Biden, or Tara Reade, a former Biden staffer who alleged in March that he sexually assaulted her during the early 1990s when he was a senator.

The Hunter Biden story, as well as a push from Republican consultants to get Kanye West on the ballot as a potential spoiler candidate in several states and Trump’s refusal to participate in the second presidential debate, had little resonance with the overall electorate, ranking near other low-salience events such as developments on Middle East peace and the revelation that former Homeland Security staffer Miles Taylor authored an anonymous 2018 New York Times op-ed and a 2019 book criticizing Trump.