The Public Turns to Family, Health Officials Over Celebrities for COVID-19 Vaccine Guidance 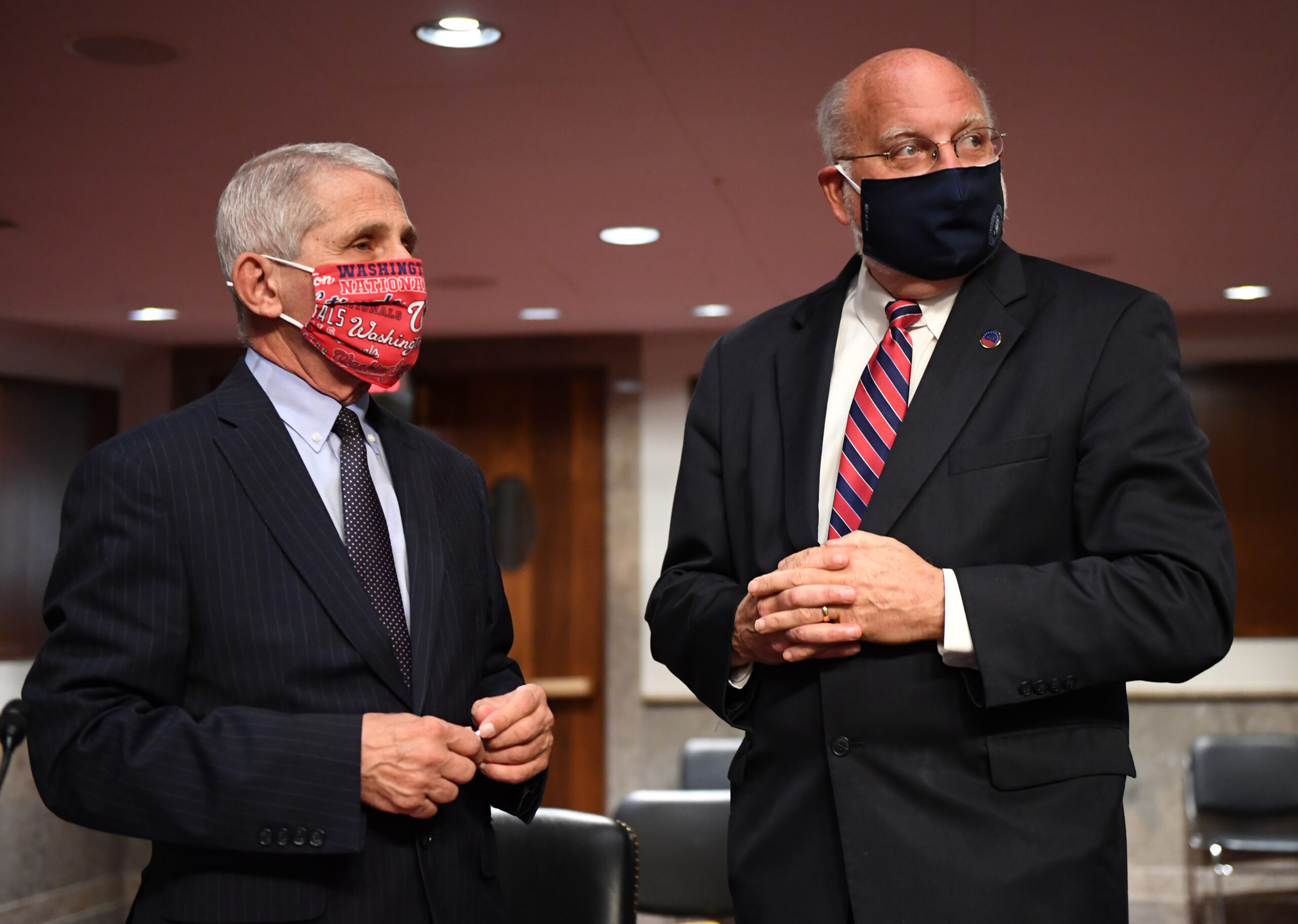 Dr. Anthony Fauci, director of the National Institute for Allergy and Infectious Diseases, and Centers for Disease Control and Prevention Director Dr. Robert Redfield, pictured before a Senate hearing on June 30, 2020, in Washington, D.C., are among the most influential figures in terms of convincing the public to get a coronavirus vaccine, new Morning Consult polling found. (Kevin Dietsch/Getty Images)
By Gaby Galvin

With the first COVID-19 shots rolling out this week, health officials are facing the daunting task of convincing a wary public to get vaccinated. The Trump administration will fund a massive public education campaign, former presidents have pledged to get their shots publicly and celebrities are being floated for multimillion-dollar advertisements, eliciting comparisons to 1956, when a young Elvis Presley got a polio shot on live TV in an attempt to boost vaccination rates.

A new Morning Consult survey indicates the public figure most likely to convince Americans to get a coronavirus vaccine is a newer kind of celebrity: Dr. Anthony Fauci, who’s led the National Institute of Allergy and Infectious Diseases under six presidents and became a household name in 2020 as the most trusted voice on the coronavirus pandemic in the United States.

Forty-five percent of adults said they would be much more likely or somewhat more likely to get a COVID-19 vaccine if Fauci encouraged it, second only to their families, at 52 percent. Next up were Centers for Disease Control and Prevention Director Dr. Robert Redfield (44 percent), respondents’ friends and Food and Drug Administration Commissioner Dr. Stephen Hahn (both 40 percent), according to the survey, which was conducted Dec. 10-15 among 6,000 adults and has a margin of error of 1 percentage point. 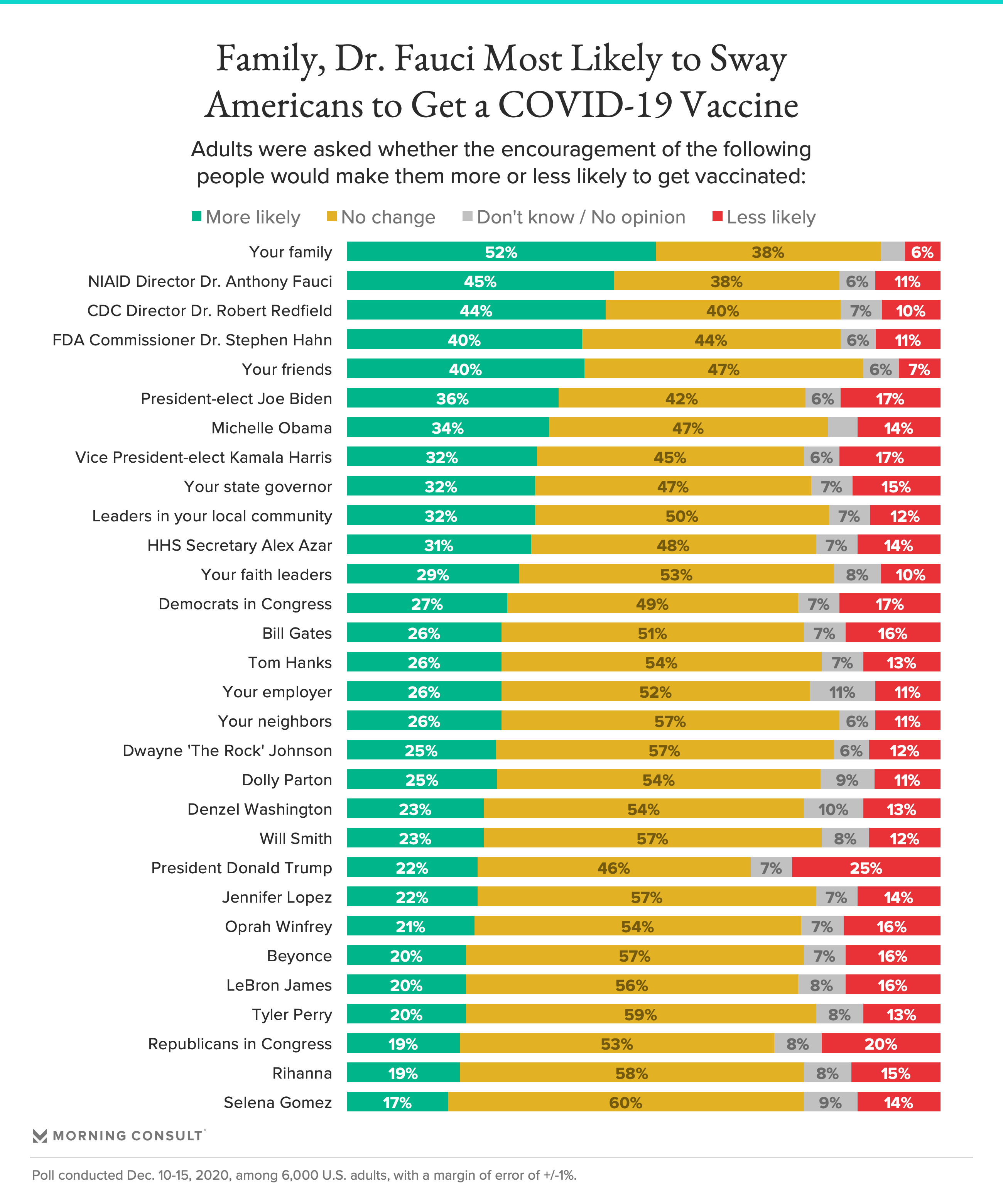 Mainstream celebrities and influencers generally ranked low on the 30-person list, with about a quarter of adults saying Tom Hanks, Bill Gates, Dolly Parton and Dwayne “The Rock” Johnson could sway them to get vaccinated. Respondents’ state governors and their community leaders ranked slightly higher.

“I think it shows that the pre-eminence of celebrity has somewhat dimmed,” said Dr. Brian Castrucci, president and chief executive of the de Beaumont Foundation, a public health advocacy group. “Celebrities are influential, but so is the head of your soccer league.”

Even so, coronavirus vaccines could be a hard sell for many, the survey shows, with 54 percent of adults saying they’d get vaccinated and 35 percent saying they could be swayed by someone else to get a shot as soon as it’s available to them. 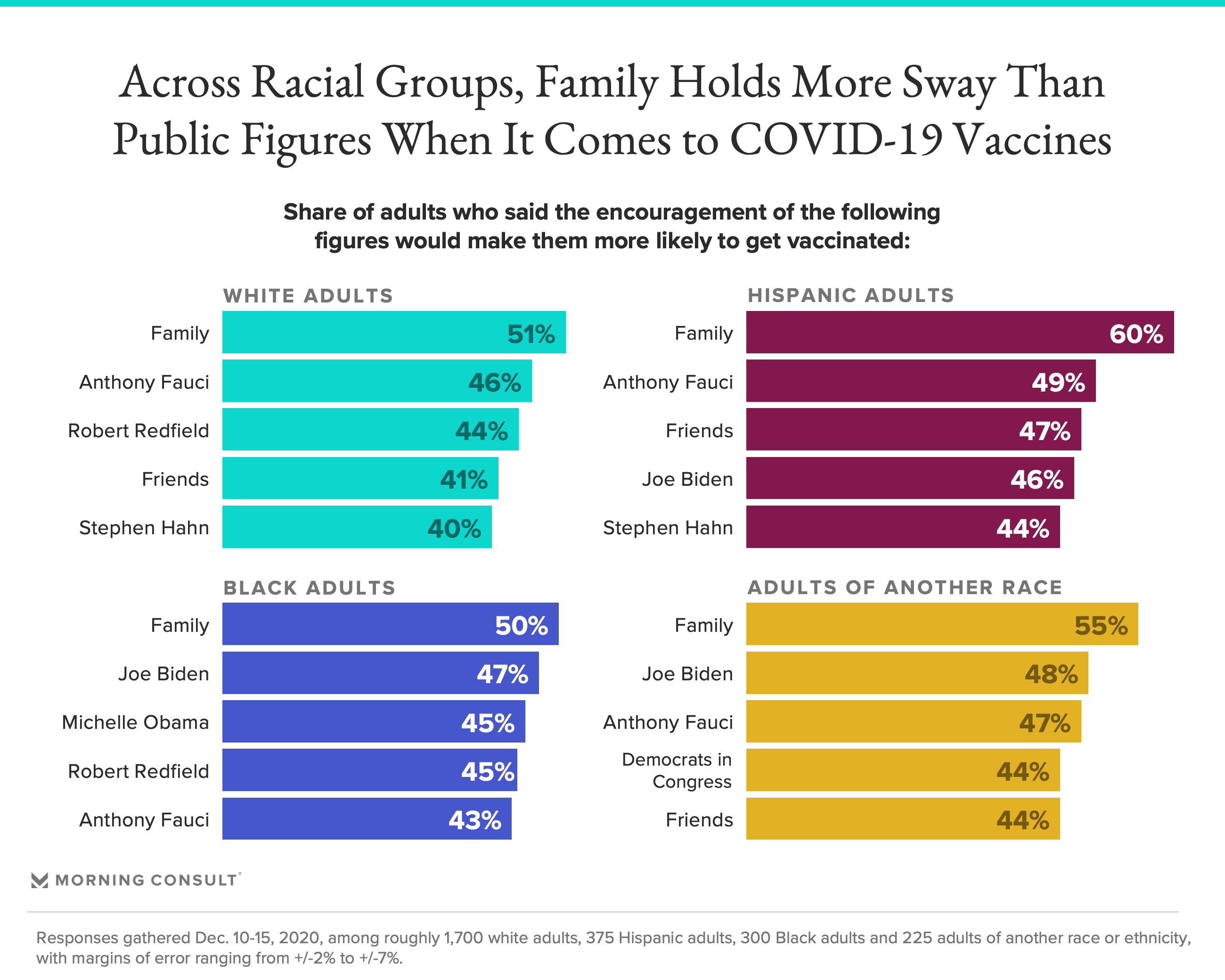 Nearly every group cited family as the most likely to influence them to get vaccinated, but certain figures appealed more to different people, the survey found. For example, Black adults were most likely to say the encouragement of President-elect Joe Biden would influence them to get vaccinated, followed by former first lady Michelle Obama, Redfield and Fauci, while the most influential mainstream celebrities were Johnson and Beyoncé.

For Hispanics, family, Fauci, their friends and Biden were the figures most likely to sway them to get vaccinated, and Jennifer Lopez was the highest-ranked celebrity. Margins of error were wider for Hispanic and Black respondents, at 5 and 6 points, respectively.

“This isn’t a one-size-fits-all,” Dr. Leana Wen, a visiting professor of health policy and management at George Washington University and a former health commissioner of Baltimore, said via email. “The person who is the most credible messenger to one group may not have an effect on another.”

Whether someone lived in an urban, rural or suburban area didn’t make much difference in whom they said could successfully encourage them to get vaccinated, but political persuasion did. Democrats listed Fauci (59 percent), Biden (57 percent), family (55 percent) and Vice President-elect Kamala Harris (53 percent) as their likeliest influences, while Republicans said their family (52 percent), President Donald Trump (41 percent), their friends (41 percent) and Redfield (36 percent) were most likely to sway them.

“There are millions of Americans who will follow Trump’s lead, and he can do so much good to be among the first people to be vaccinated,” Wen added.

Yet vaccine endorsements from political figures could also alienate some Americans, the survey shows. Between 17 and 25 percent of adults said they would be less likely to get vaccinated if Trump, congressional Republicans, Biden, Harris or congressional Democrats recommended it.

Americans who are on the fence about a coronavirus vaccine will have some time to make up their minds. Federal health officials, including Fauci, have said all Americans who want a vaccine should have access to a shot by summer 2021. In the poll, 14 percent of adults said they expect to get a vaccine in the next six to seven months, while 55 percent think they’ll have access to a shot sooner.

“This is an exercise of trust,” Castrucci said. “Vaccine uptake will move at the speed of trust.”