Most voters don’t think getting coronavirus shots should be mandatory

A COVID-19 vaccination card is pictured at Cardiff and Vale Therapy Centre on Dec. 8, 2020, in Cardiff, Wales. A new Morning Consult/Politico survey found that 58 percent of registered voters in the United States said they would support a requirement that people who have been vaccinated carry a small card that documents their status. (Matthew Horwood/Getty Images)
By Gaby Galvin

Most voters don’t think coronavirus vaccines should be mandatory, but more than half support a requirement from the federal government that people who have been vaccinated carry a card with them proving as much, according to a new Morning Consult/Politico poll.

The survey was conducted Dec. 11-14 as the Food and Drug Administration cleared the first COVID-19 vaccine, developed by Pfizer Inc. and BioNTech SE, in record-shattering time, and the first Americans got vaccinated. Between doses from Pfizer and Moderna Inc., the latter of which could be authorized as soon as Friday, federal health officials expect 20 million people to get their first shot this month, marking the most significant breakthrough yet out of a pandemic that has resulted in more than 300,000 deaths in the United States, with 50,000 in the last month alone.

The poll was conducted among 1,990 registered voters and has a margin of error of 2 percentage points. 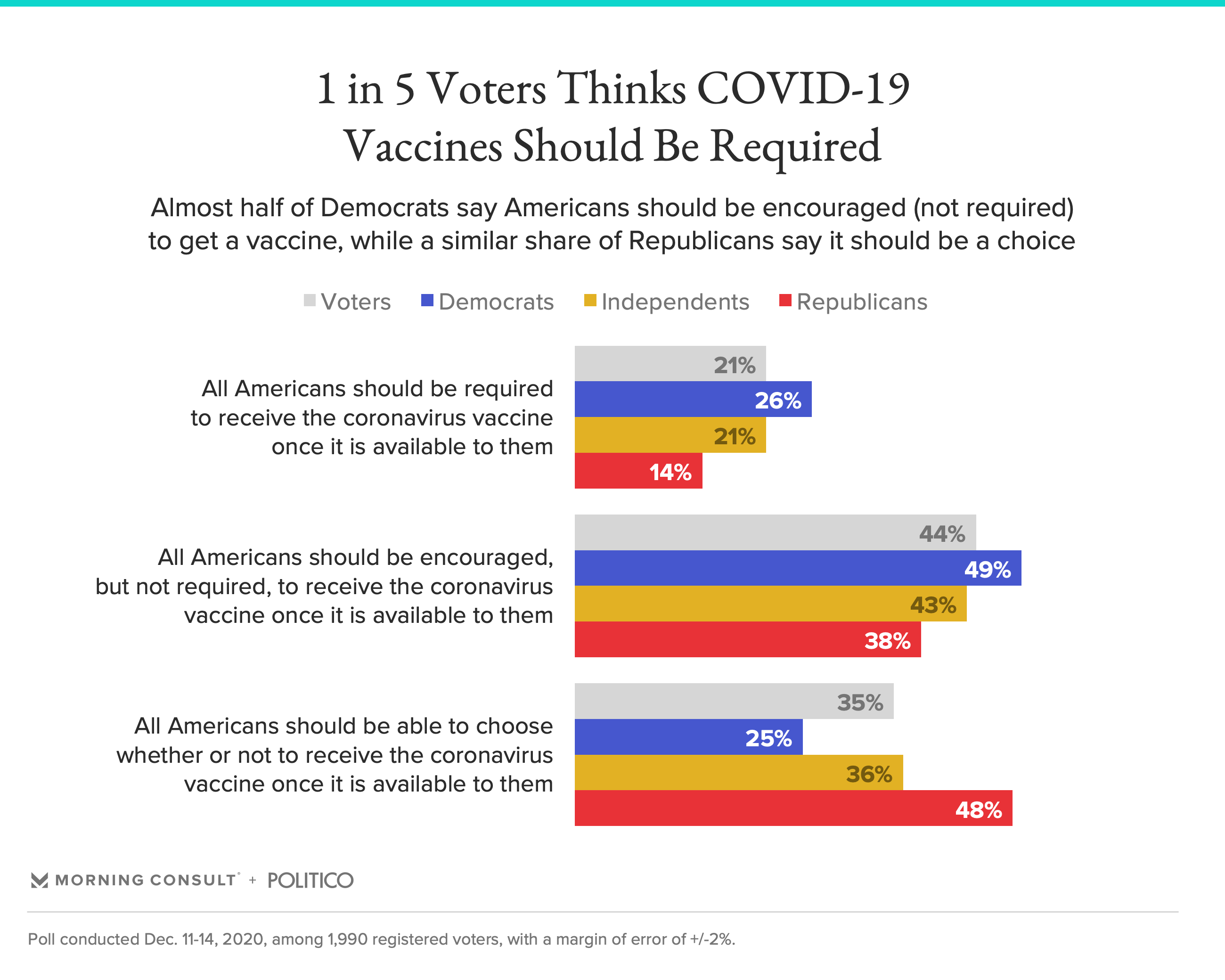 Earlier this month, President-elect Joe Biden said COVID-19 vaccinations should not be mandatory, but that he will “encourage people to do the right thing” by getting inoculated. Health officials have also planned to distribute vaccination cards to remind people when to get their second dose, though airlines and international organizations have also floated the possibility of requiring so-called immunity passports to return to pre-pandemic activities and travel.

In the United States, most voters (58 percent) said they would either strongly or somewhat support a hypothetical requirement that people who have been vaccinated carry a small card that documents their status, while another 30 percent would oppose vaccination cards and 12 percent said they didn’t know or had no opinion, according to the survey.

Democrats were much more likely than Republicans to support vaccination card requirements, 72 percent to 48 percent, as were people with higher incomes and education levels, the survey found. Since the early days of the pandemic, Democrats have also been more likely to say they’ll get vaccinated when COVID-19 shots are available, previous Morning Consult polling shows. 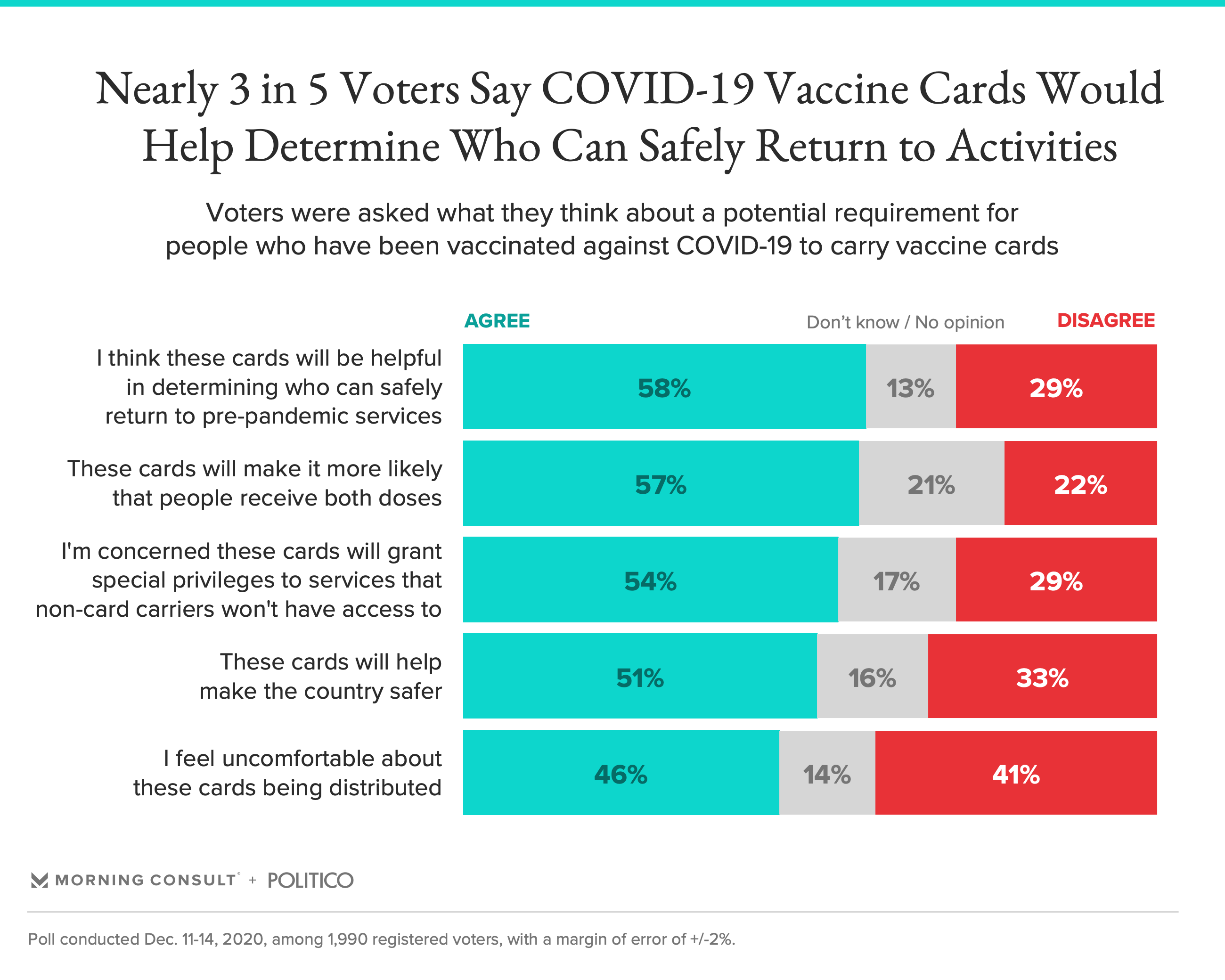 When asked how vaccination cards might be used, 58 percent of voters said they’d be helpful in determining who can safely return to pre-pandemic activities, 57 percent said the cards would make it more likely that people receive both doses of the two-shot vaccine and 51 percent said they think the cards will make the country safer.

Yet a sizable share of voters also think the hypothetical cards could bring more harm than good, with 54 percent saying they’re concerned the cards will grant special privileges to those who have them and 46 percent saying they would be uncomfortable with cards’ distribution.