Small businesses and the military remain America’s most trusted institutions 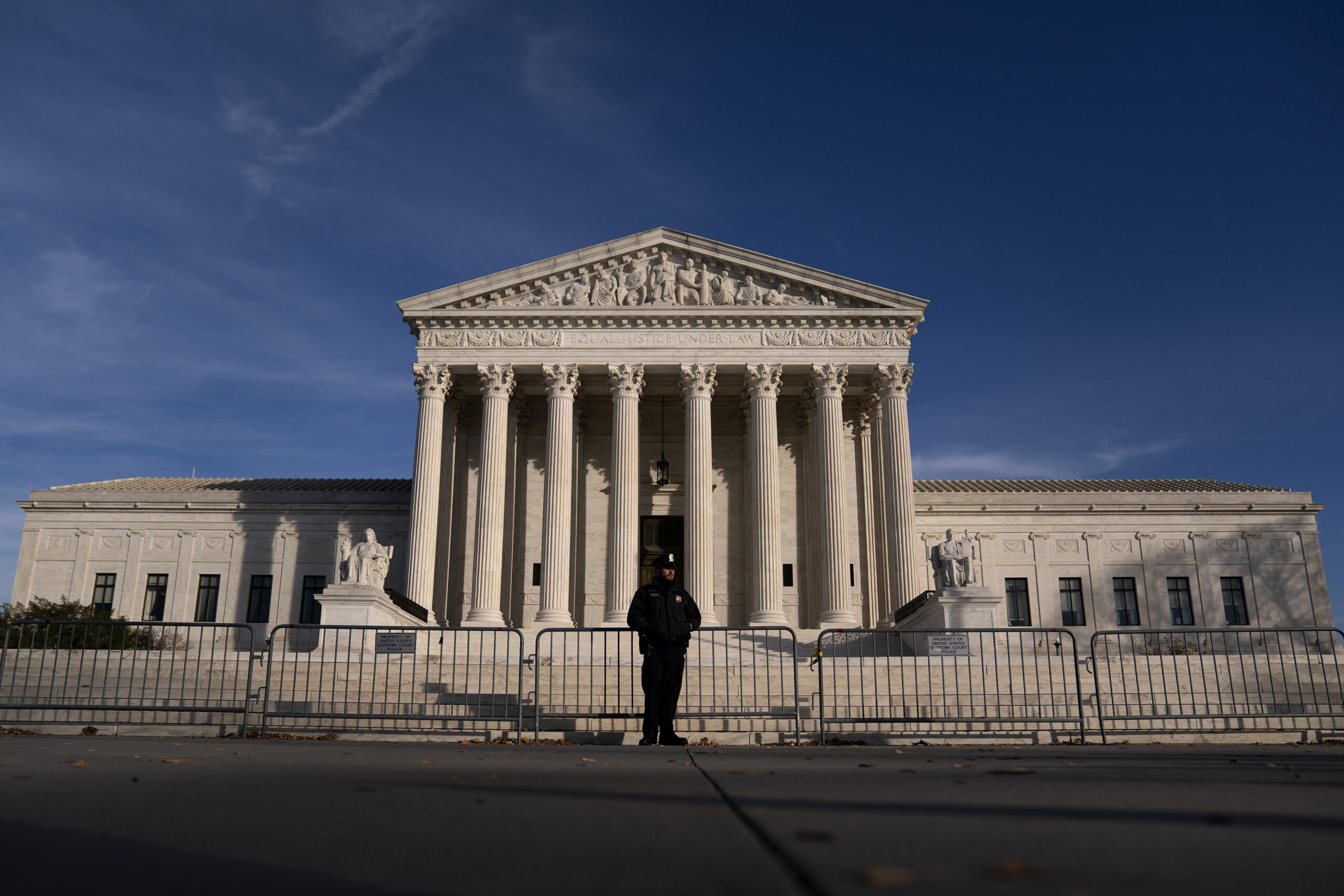 A police officer stands outside of the Supreme Court on Dec. 11, 2020. New polling conducted immediately after the high court rejected a Texas lawsuit seeking to overturn the results of the 2020 presidential election found confidence in the Supreme Court rebounded from 2018 levels. (Stefani Reynolds/Getty Images)
By Eli Yokley

Voter confidence in a wide range of American institutions dipped two years ago at the midpoint of President Donald Trump’s tumultuous tenure in office. But as he prepares to leave the White House next month, polling shows a recovering level of trust in the bedrocks of U.S. society.

American foundations such as the presidency, Congress and the Supreme Court have rallied from notable drops from December 2016 to December 2018, according to the latest Morning Consult/Politico survey, which found the U.S. military and small businesses remain the most-trusted institutions in the country. 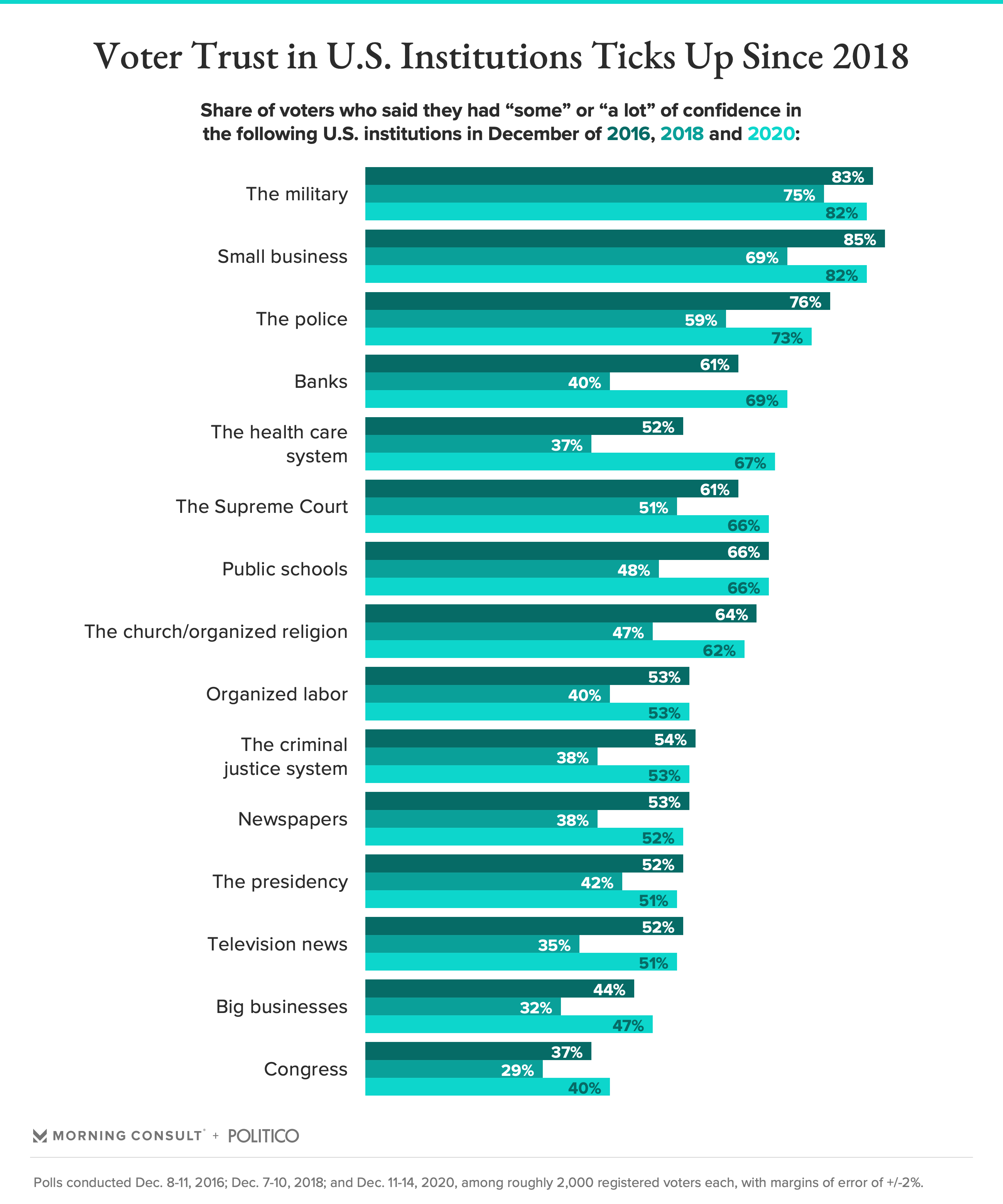 Two-thirds of voters said they have “a lot” or “some” confidence in the Supreme Court, up 15 percentage points from two years ago and also an improvement on its 2016 standing.

Around half of voters (51 percent) said they have “some” or “a lot” of confidence in the presidency, up 9 points from the 2018 polling but roughly where it was during Trump’s presidential transition.

Congress remains the country’s least-trusted institution, but even it has seen improvement from a 2018 slump: 40 percent of voters have trust in the federal legislative branch, up 11 points over two years. Each survey carried a 2-point margin of error.

The latest survey of 1,990 registered voters was conducted Dec. 11-14, during a time that could lend itself to intense institutional unease in the country. Along with the ravaging pandemic and the economic pain felt by millions of Americans, the president — backed by federal and state legislators as well as attorneys general in the reddest parts of the country — has tried to use the judicial system to overturn his November election loss to President-elect Joe Biden.

Related: After the Election, Democrats Are Less Wary of the Electoral College, While GOP Support for Keeping It Drops

But that effort appears to have reached a dead end: The Electoral College voted to secure Biden’s victory on Monday, three days after the Supreme Court and its conservative majority declined to take up a case brought by Texas Attorney General Ken Paxton challenging the election results in four swing states that went against Trump.

In remarks after the Electoral College made his win official, Biden spoke directly to the strain on the country’s safeguards: “We the people voted, faith in our institutions held, the integrity of our elections remains intact.”

The latest polling tends to support Biden’s analysis of institutional sturdiness. Aside from a small drop in voter confidence in the police and small businesses, trust in a list of 15 institutions either held steady or improved compared with the polling conducted just before Trump took office. 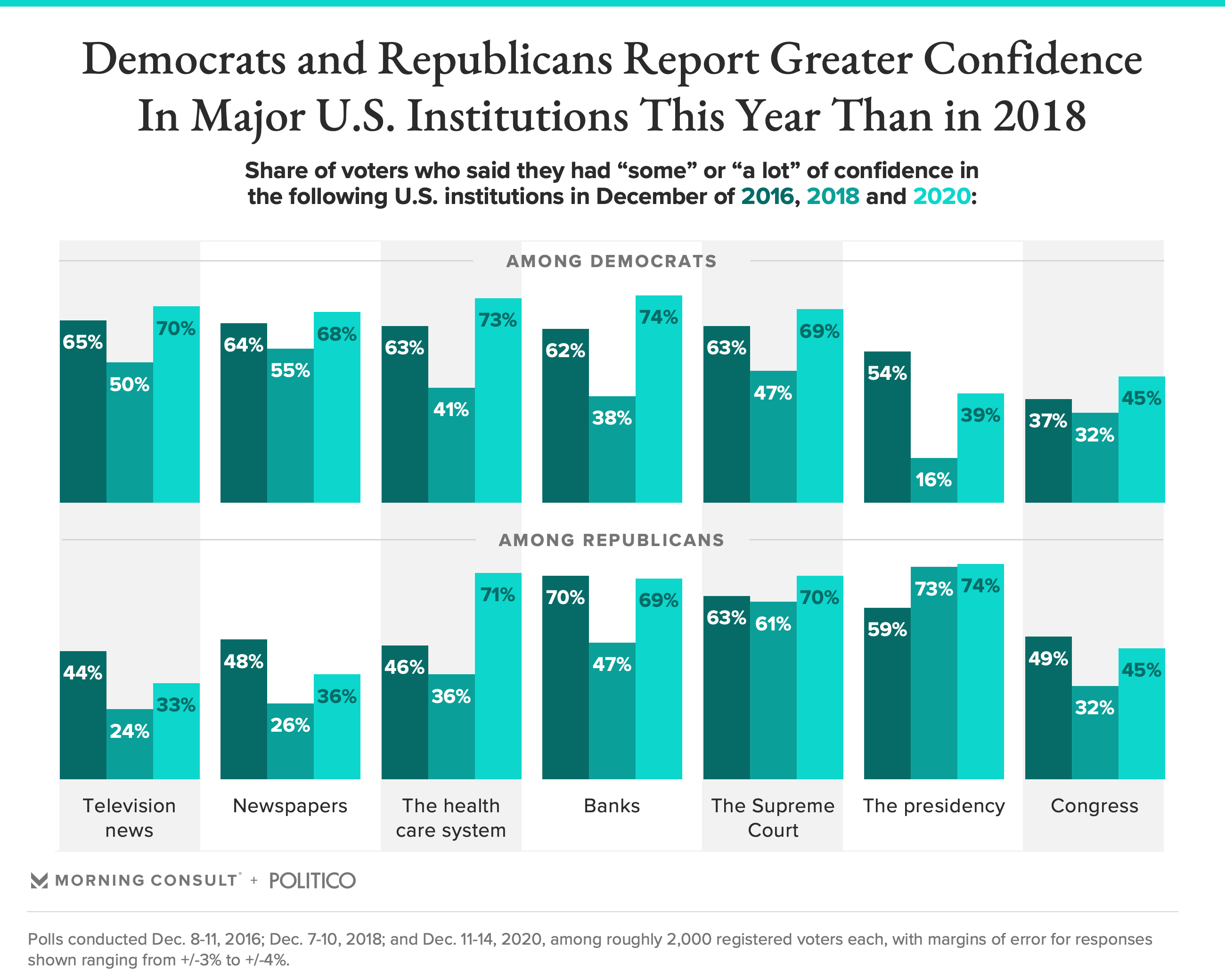 Republican voters’ confidence in the presidency (74 percent) has held steady since 2018, following a double-digit improvement from 2016, while their trust in news media institutions has not fully recovered from its 2018 fall after continued attacks from Trump and his allies. Republicans are most likely to have faith in the police, with 86 percent expressing confidence.

Compared to the other institutions, the presidency inspires the least confidence among Democrats (39 percent), though following Biden’s victory, the figure has rallied from a 16 percent low in the 2018 survey.

And despite Trump’s imprint on the Supreme Court, 69 percent of Democrats said they have confidence in it, up 22 points from the 2018 survey, which was conducted after the divisive confirmation fight for Supreme Court Justice Brett Kavanaugh.