For Some Pandemic Tech Habits, Returning to Normal Won’t Be an Option 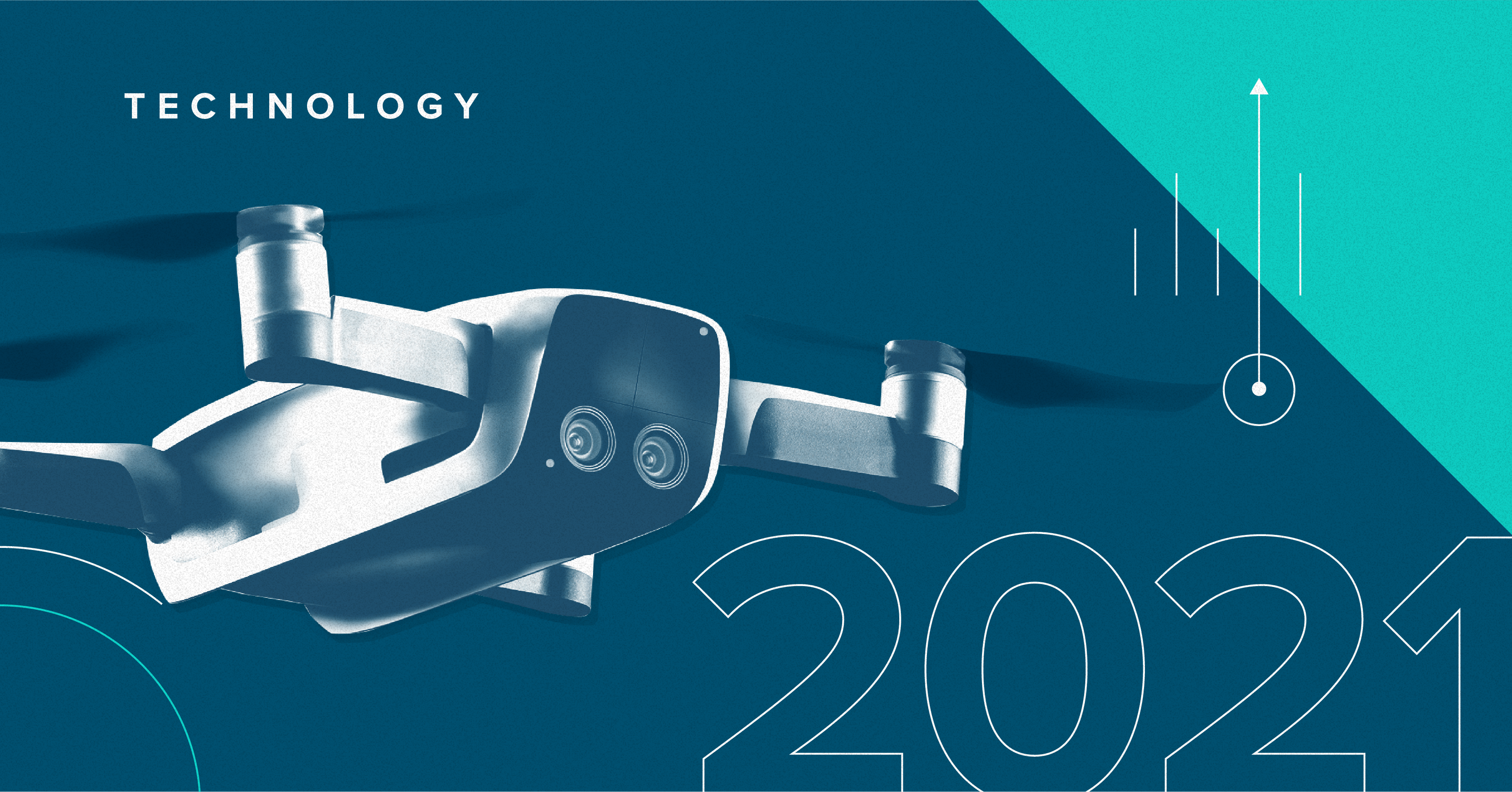 As we near the end of a year that has upended life as we know it, Morning Consult is looking ahead to what 2021 will bring. Sam Sabin reports on the future of tech’s power in the United States. Others in our end-of-year series so far: Entertainment / Health

On March 9, the Monday before many in the United States started to transform their homes into remote workplaces, classrooms and doctor’s offices as the coronavirus spread rapidly from city to city, Zoom Technologies Inc. boasted 32,077 mobile app downloads.

Nine months later, those daily downloads had climbed to 197,338 on Dec. 14, and the app has now been installed on Americans’ phones more than 75 million times over that time period, a 515 percent increase, according to data provided by Apptopia to Morning Consult.

As states and cities ebbed and flowed between letting up and doubling down on social distancing requirements throughout the year, apps aimed at helping people stay connected to the physical world, like Zoom, YouTube, Amazon Shopping and Uber Eats, saw their mobile phone downloads grow between March and December.

And tech industry experts say this is emblematic of how U.S. consumer tech habits, and subsequently their views on the power of the industry, will be forever changed by the COVID-19 outbreak — even if a recent Morning Consult survey suggests the public isn’t fully aware of the shift yet.

Related: Apps Were Supposed to Be COVID-19 Contact Tracing’s Secret Weapon. So Far, Only 14% of Adults Are Using Them

“The online world has grown into more of a centerpiece in our lives this year,” said Dr. Dipayan Ghosh, co-director of the Digital Platforms and Democracy Project at the Harvard Kennedy School’s Shorenstein Center on Media, Politics and Public Policy.

“No doubt, companies like Facebook, Amazon, Google have grown in their power over society,” he said, adding that communications apps and delivery apps will continue to be popular in the post-pandemic world.

A majority of the 2,200 U.S. adults in a Morning Consult survey conducted Dec. 10-13 see that rising influence, with 55 percent of respondents saying the tech sector has “a lot” of power in the United States — the third-highest share among a list of 12 sectors included in the poll, following politics and government (66 percent) and banks and finance (56 percent). The survey carries a margin of error of 2 percentage points.

But despite the growing dependence on tech this year, the share who said the sector has “a lot” of power is virtually unchanged from a December 2019 survey posing the same question. 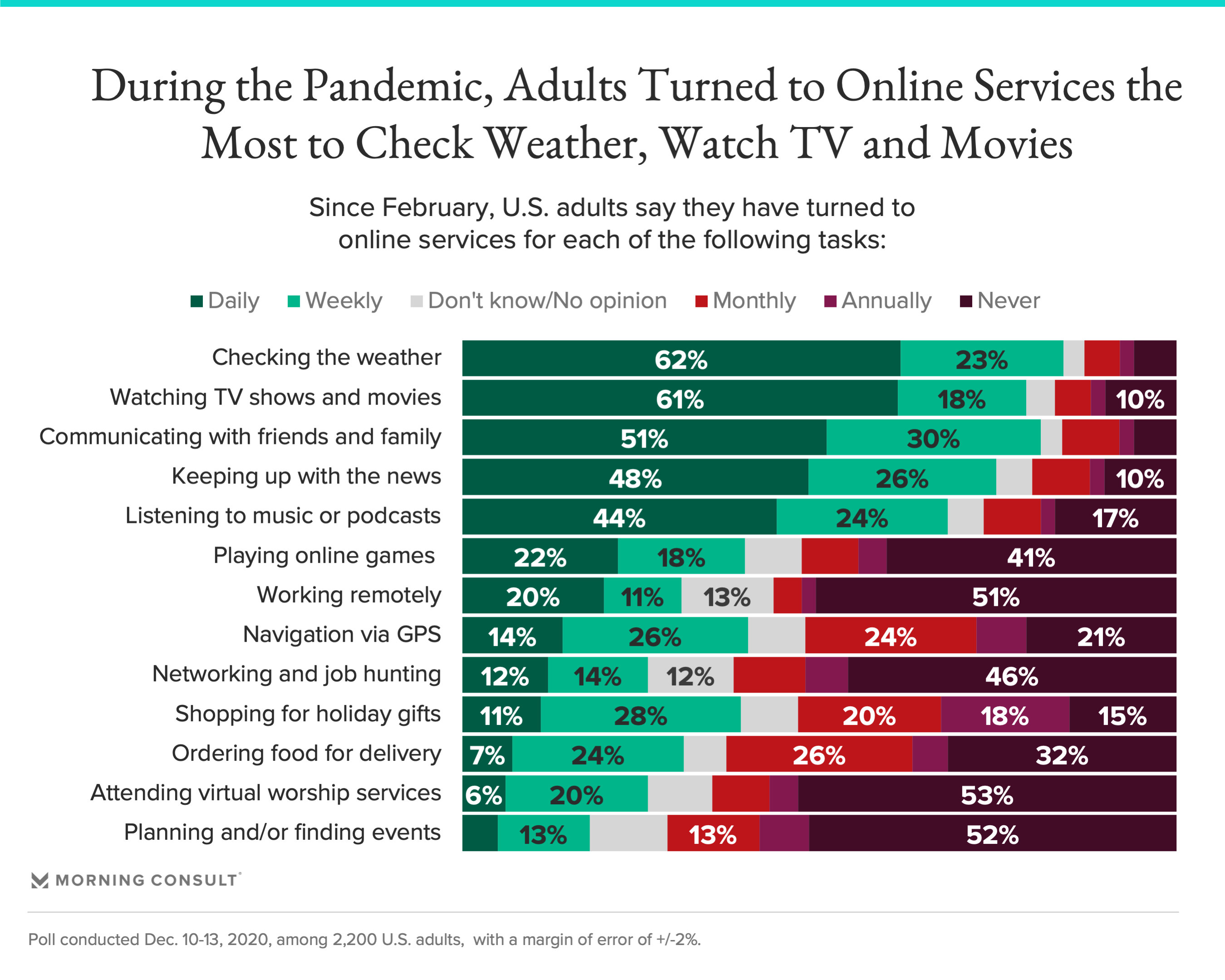 And those same static perceptions are seen when gauging the public’s reliance on online services this year. When asked how often they used online services to do a number of tasks since COVID-19 reached the United States, checking the weather was the most popular activity, with 62 percent saying they turned to online services daily to do so.

Watching TV shows and movies (61 percent) and communicating with friends and family (51 percent) on a daily basis followed behind, but overall, the results were mostly unchanged from responses in the December 2019 survey. The only notable everyday movements were seen in watching TV shows and movies, which grew 10 percentage points, and communicating with friends and family, which declined by 10 points due to more people engaging in the habit on a weekly basis instead.

While there weren’t huge movements in usage of certain online services during the pandemic, René Quashie, vice president of digital health at the Consumer Technology Association, said the pandemic has only accelerated adoption of telehealth, e-commerce and business communications, meaning a “return to normal” might not be possible for some parts of the industry in a post-pandemic world. Employers might think twice about sending an employee on a business trip that could be done through Zoom, and more patients will consistently turn to telehealth services for simple checkups, he said.

“We need to make sure that we don’t cast all tech players in the same way,” Quashie said. “Tech is really a force for good when you look at everything that occurred during the pandemic.”

However, not all technologies have proven themselves essential through the duration of the pandemic, with some social media apps and food delivery services seeing their downloads dwindle after early pandemic spikes. For instance, mobile downloads for Houseparty, a video chat service where users chat or play in-app games with friends across operating systems, peaked on April 14 at 280,216. Since then, they’ve mostly fallen, aside from a brief surge in November and a few other spikes here and there. 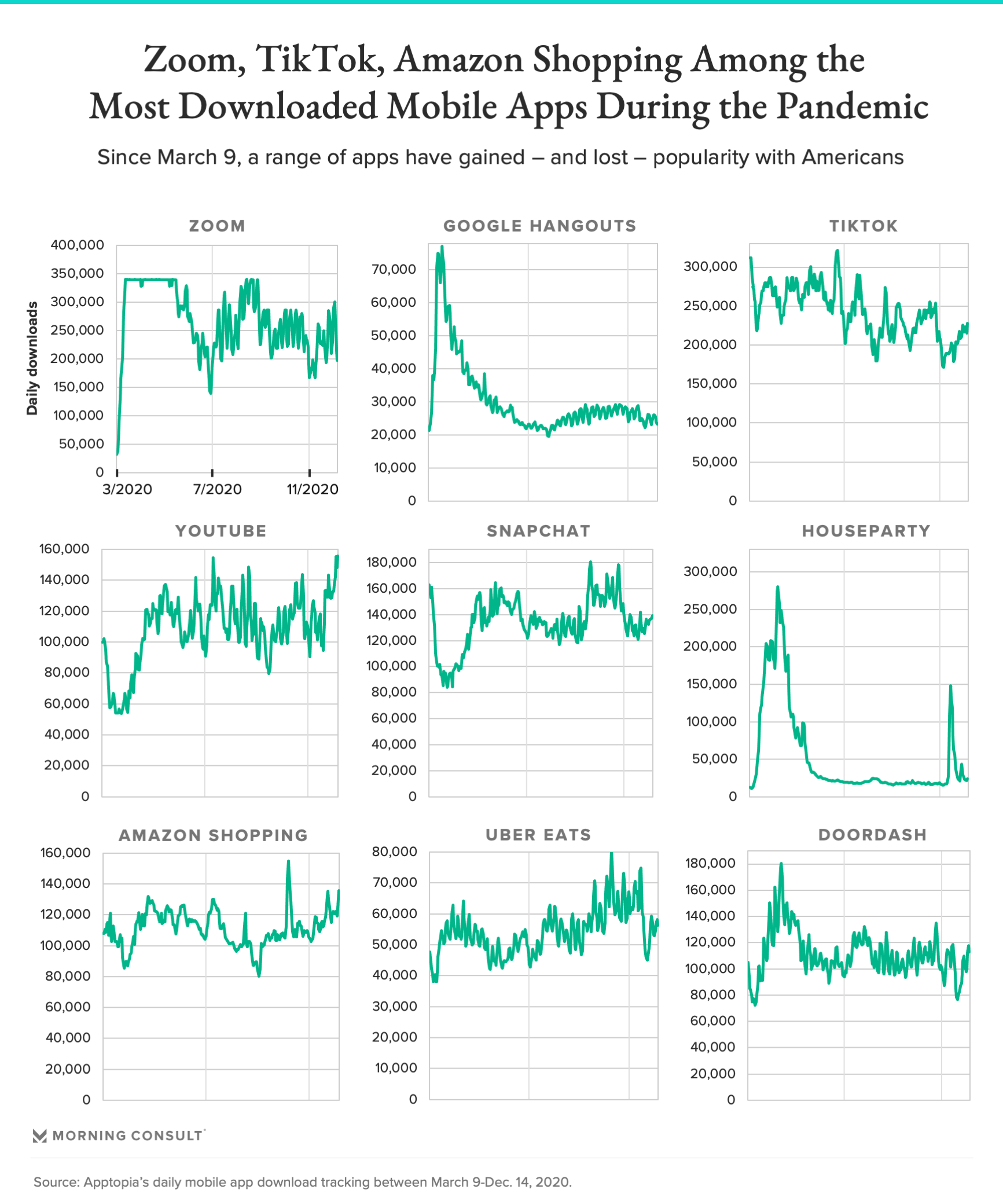 Despite the growth in app downloads and the lack of change seen in survey respondents’ views on their online habits, tech tied with for-profit colleges and health insurance companies to top the list of industries that respondents in Morning Consult’s survey said weren’t regulated enough, with 34 percent saying they believed there was “not enough regulation” targeting the industries on both the federal and state levels. Insurance companies, large banks, Wall Street and oil and gas companies were all within the margin of error at 33 percent apiece.

“Technology seemed very positive for a lot of people when it was something that was additive and almost magical. You could get food delivered very easily, or you could FaceTime your grandmother that lived far away,” he said. “There is something that changes when it goes from being additive to being essential.”

Conner, who founded Facebook’s Washington office and was Slack Technologies Inc.’s first D.C.-based employee, said tech’s shift to becoming an essential tool for constituents means more Washington players will also be getting involved in the growing debates about tech regulation.

“The pandemic has taken tech policy from a niche to something that clearly impacts everyone,” he said. “Tech companies and those who specialize in tech, who might’ve in the past hoped to keep the conversation very specialized and contained, are going to have to deal with the fact that this is an issue that everyone understands now, and it is going to be a broader conversation because of this pandemic.”