COVID-19 Has Been a Disaster for Main Streets. What the Future Holds for Their Banks Is a Growing Concern 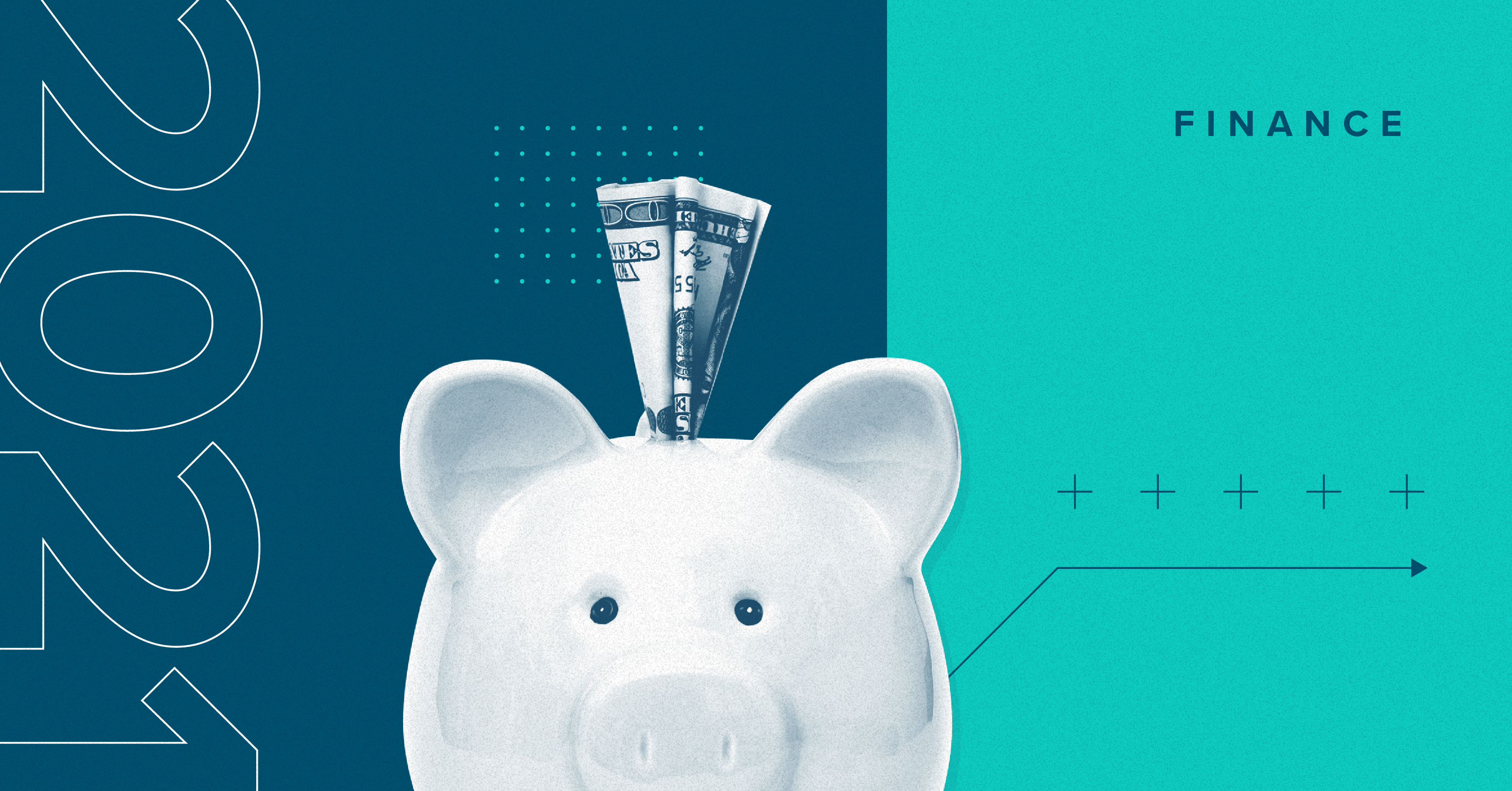 As we near the end of a year that has upended life as we know it, Morning Consult is looking ahead to what 2021 will bring. Claire Williams reports on the pandemic’s effect on community banks and local economies in the United States. Others in our end-of-year series so far: Entertainment / Health / Tech / Brands / Energy

Already battered by months of the coronavirus pandemic, Main Streets across the country are staring down the barrel of a grim winter. But the banks that serve those small businesses have endured — if not thrived — as COVID-19 took over the country.

That good fortune could change in 2021 as regulatory relief for community banks comes to an end and aid to small businesses runs out, sparking potential defaults in the small business space.

Large banks throughout the pandemic have reported being well-capitalized enough to withstand the economic shock, and community banks, somewhat surprisingly, are outperforming their larger counterparts in several key areas. One of the most important is the Paycheck Protection Program, which has kept many community bank customers afloat during the months they’ve been forced to shutter their business or operate on an extremely limited basis. 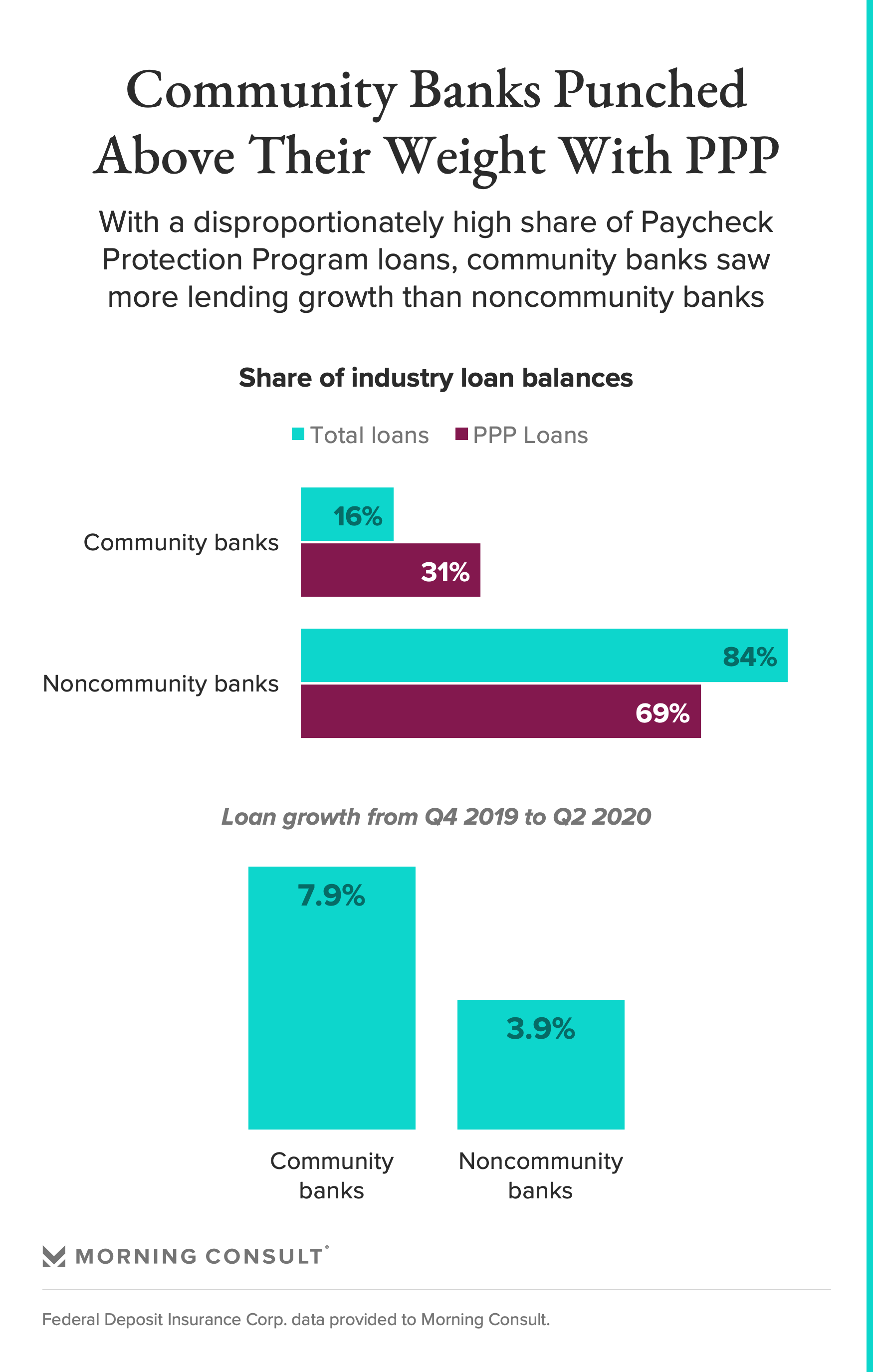 While community banks held 16 percent of total loan amounts in the third quarter, the industry’s share of PPP loans totaled 31 percent. Community bank loans overall also grew more in the first half of the year at 7.9 percent, compared to 3.9 percent for non-community banks, according to data from the Federal Deposit Insurance Corp. provided to Morning Consult.

Although banks will earn a fee for the loans if they are forgiven, which could be a boon to community banks in the future, it is currently unclear — and will be for at least a few additional quarters — how much these loans will help their bottom lines. Mainly, the loans have attracted new customers and kept existing ones from defaulting on their current lines of credit.

Iverson, a former assistant economist at the Federal Reserve Bank of New York, noted that regulators allowed banks to offer more forbearance and opportunities to restructure debt, letting customers skirt some penalties on missed loans or rental payments. And the CARES Act signed in March lowered the required community bank leverage ratio so that small banks could do more lending.

That regulatory strategy has kept community banks booming, but “there’s been a lot of kicking the can down the road,” he said.

With the future of economic relief from Congress uncertain and regulatory relief measures coming to an end, some economists predict that the stress building up among small businesses could lead to defaults and bankruptcies for local bars, restaurants and shops.

“You have a lot of small businesses that have shut down, have revenues down and maybe they’ve had to stop paying their landlord rent,” Iverson said. With help from the Federal Reserve and government, “the financial system has actually done quite well, but whether they will continue to do fine, I think, is an open question.”

The pandemic has, from the beginning, been mostly a local economic event. While large companies that would show up on the S&P 500 and the Dow Jones Industrial Average, such as Walmart Inc. and Amazon.com Inc., have thrived, smaller, local businesses have shuttered or been forced to operate with skeleton staffs, catering to increasingly limited customer bases.

Americans have seen the effects: As shutdown orders swept the country in March, the public’s concern for their local economies skyrocketed, according to Morning Consult tracking data. Since then, concern for local economies has remained elevated nearly a year into the pandemic. 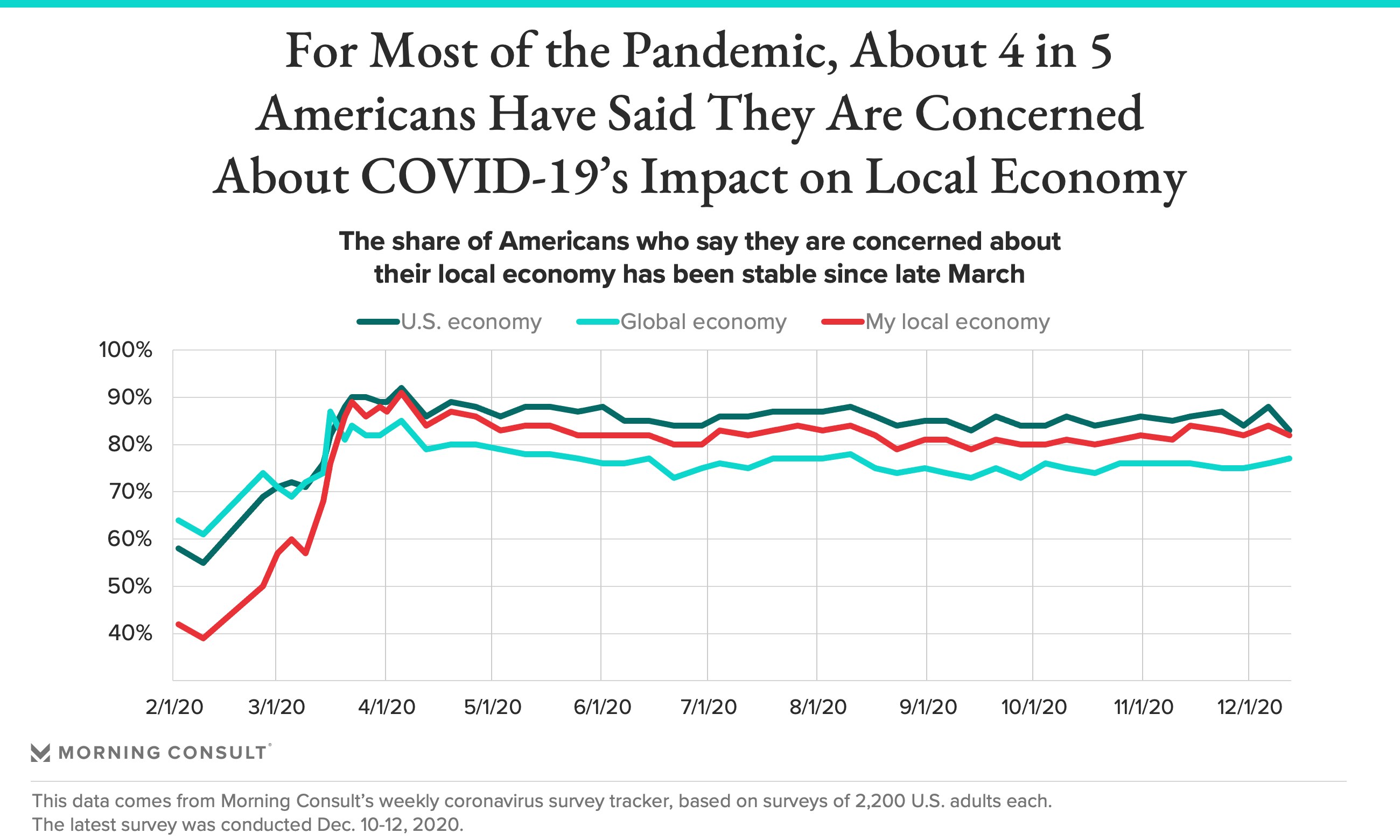 That dynamic will, almost inevitably, work its way into community banks to some degree.

One of the first ways it will be felt is likely through commercial real estate lending, according to Cam Fine, president and chief executive of Calvert Advisors LLC and former CEO of the trade group Independent Community Bankers of America, as CRE is typically a dominant area of lending for community banks.

Community bank margins are already thin because of the pandemic, Fine said, and those margins could be squeezed even further as COVID-19 continues sweeping through smaller cities.

“This is a lethal cocktail to a community bank,” he said. “Community banks are margin bankers, and they’re over-loaned in CRE, so that’s where I’d look first and where they’re going to have issues.” 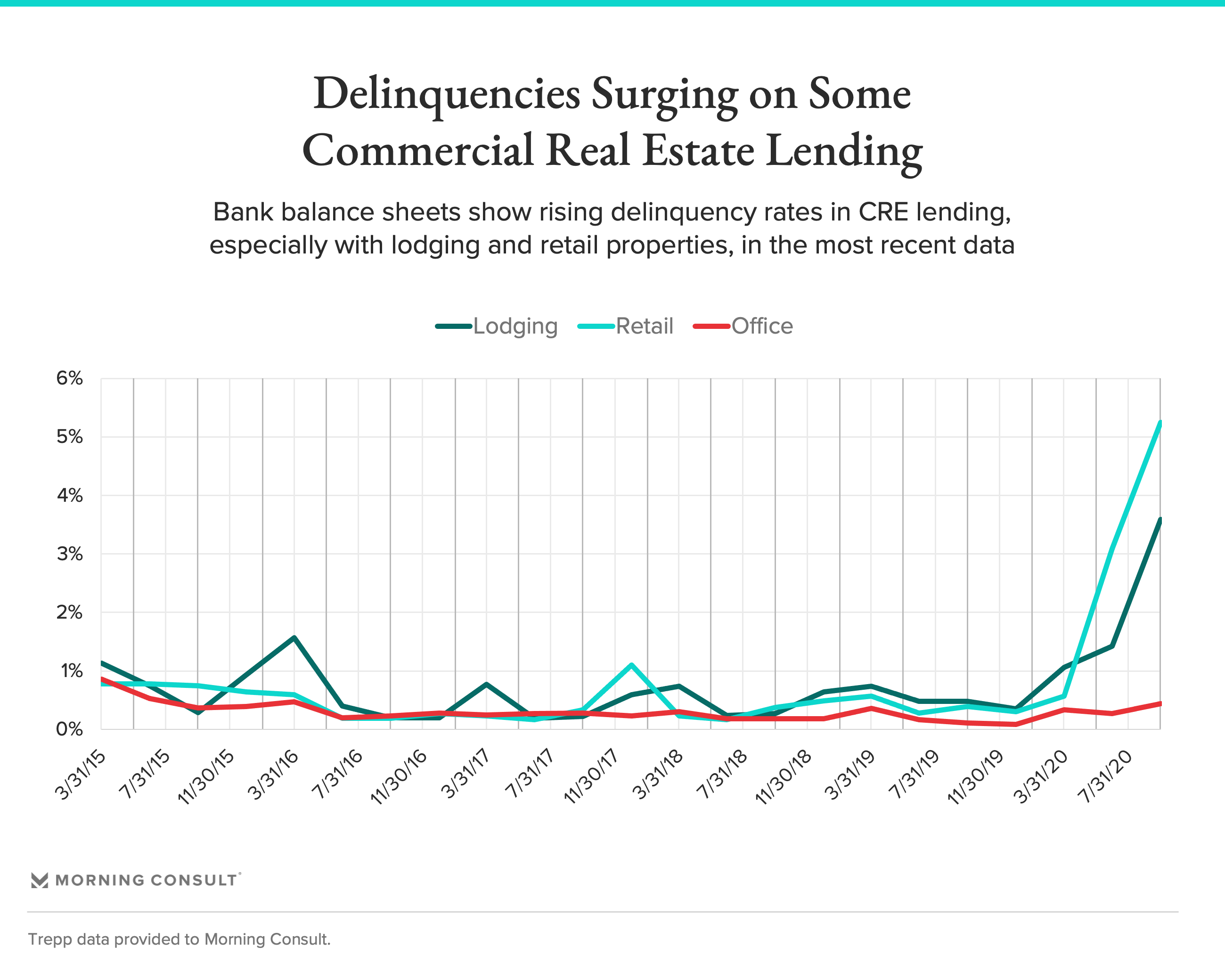 Delinquencies in CRE lending in lodging and retail have already jumped to record highs for the past five years, according to the most recently available data from financial data firm Trepp LLC.

CRE delinquencies are expected to spike further in the coming months, and likely have since the fall, said Matthew Anderson, a managing director at Trepp who has testified before Congress on commercial real estate’s impact on bank stability. The forbearance rate as of September for the lodging sector was 75 percent, and 39 percent for the retail sector. As the pandemic continues to worsen daily going into the winter, some states and municipalities have begun downsizing capacity or restricting indoor access to restaurants and stores, while the cold could be a deterrent to outdoor options.

How rapid and deep the financial stress that community banks will face depends on the fate of a relief package from Congress and how the country recovers economically from the pandemic, according to Paul Merski, group executive vice president, congressional relations and strategy at Independent Community Bankers of America, noting that community banks can “have planning contingencies” for economic stress and can “weather these downturns.”

“It’s really right now a function of how quickly we can turn around the economy with the vaccine and get certain segments of the country, particularly retail and travel, up and running again,” he said.

The incoming Biden administration could be a double-edged sword for community banks: Fine said that the “tone” in banking agencies will change under the president-elect and regulation is likely to become tighter, but Democrats have more widely been pushing for economic relief that will help community banks.

“But here we are,” he said. “The damage is already being done.”