At the Grid’s Edge: Storage and Distributed Energy Technologies Key to a Clean Electricity System’s Resilience 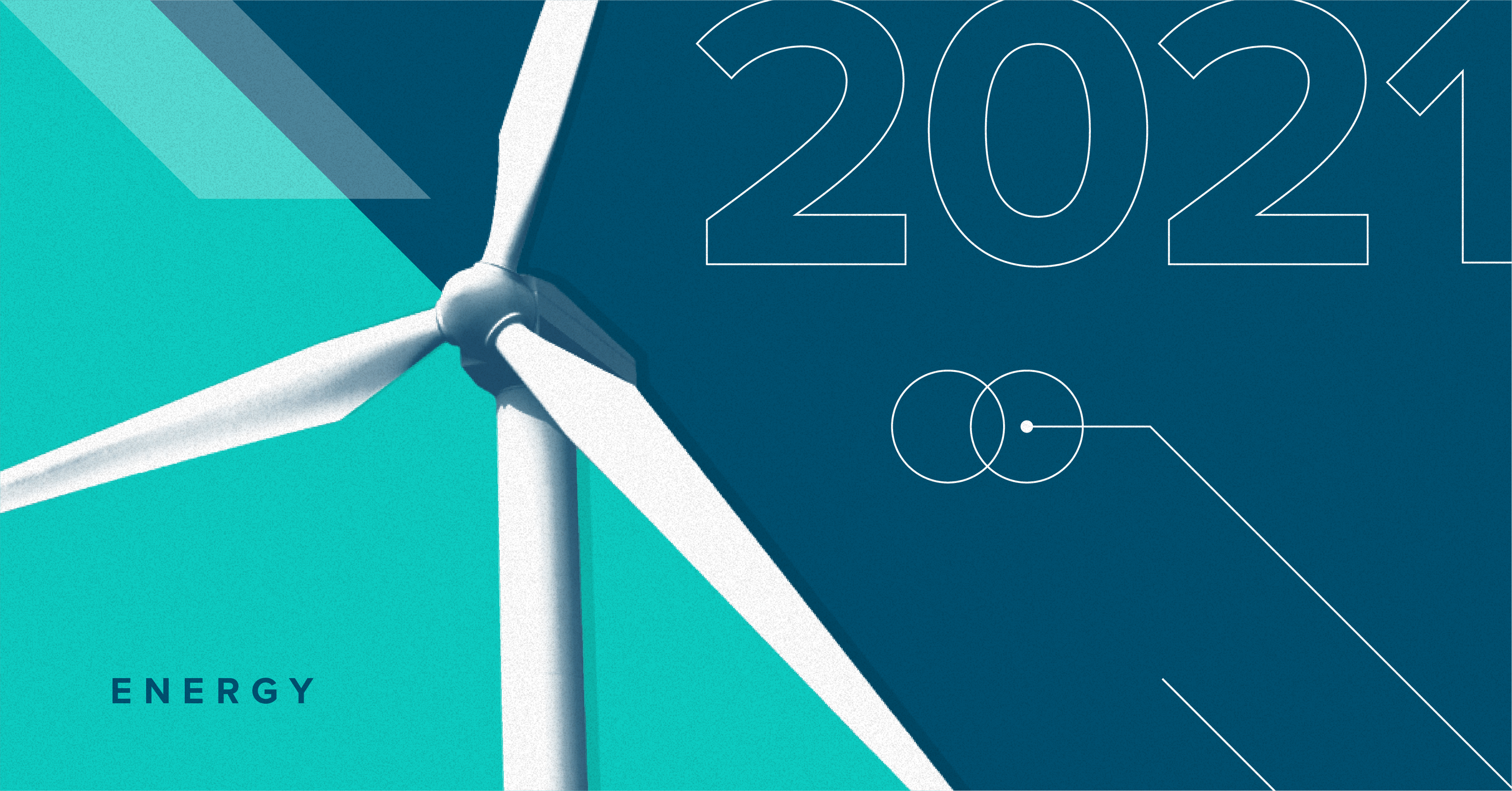 As we near the end of a year that has upended life as we know it, Morning Consult is looking ahead to what 2021 will bring. Lisa Martine Jenkins reports on potential overhauls to the grid to meet 2035 clean-energy goals. Others in our end-of-year series so far: Entertainment / Health / Tech / Brands

Included in President-elect Joe Biden’s lengthy slate of policy objectives is a carbon pollution-free power sector by 2035, a target that just a few years ago felt improbable, if not impossible.

But recent years have seen an unprecedented turn away from coal and the suggestion that a turn away from natural gas — at least to a certain extent — will follow, as renewable energy options become increasingly cost-competitive and storage options multiply. And now, experts say Biden’s plan would simply represent an acceleration of the progress that is already underway.

However, the goal of speedier decarbonization is still an ambitious one. Getting there will require a makeover of the grid, which hinges upon “grid edge” solutions: technologies that facilitate the expansion or transformation of the electricity system, such as battery storage, microgrids and distributed energy more broadly.

The present market conditions are a “perfect storm, because renewables offer cheap kilowatt hours, and battery energy storage systems offer an affordable way to stabilize networks and allow you to maximize the use of that energy that’s produced by renewables,” said John Glassmire, senior adviser on grid edge solutions for Hitachi ABB Power Grids Ltd. “And together they’re incredibly competitive to some of the traditional generation sources that have historically been the backbone of our electricity grid.”

This slow-motion transformation is coming as demand transforms, as well. Even as the power industry moves to decarbonize, it will simultaneously be faced with the twin complications of increasing demand and less predictable demand.

“We live in a world that is electrifying,” said Mark Feasel, Smart Grid president for Schneider Electric SE’s North America operations, adding that as consumers and policymakers prompt the transportation sector and countless others to electrify, “electrical consumption will be going up.”

According to Mona Sheth, Schneider’s senior director of federal government affairs, these technologies may be having their moment in the sun as policymakers anticipate the changes a Biden administration will likely bring.

“We’ve been getting more and more outreach from congressional lawmakers and their staff trying to understand microgrid technology,” she said, explaining that the power cuts and disasters unfolding in California and elsewhere have brought particular focus to the issue. A high-profile project in Miramar, Calif., with five distributed energy resources, has been a salient Schneider case study.

This is consistent with the experience of Dr. Jessica Lovering, co-founder of the Good Energy Collective, a progressive nuclear policy group. Lovering has seen a growing movement toward municipal or regional microgrids, especially in the wake of disasters.

“More broadly, communities are starting to value local control and ownership of their power, not just low costs,” she said in a recent speech.

With the likely increase in the frequency and intensity of extreme weather events in the coming decades, the resilience of the grid will be among the power sector’s most vital metrics for success.

Michael Kadish, founding partner of Insight Power Partners, said resilience has loomed increasingly large in grid policy discussions, especially in California. “And I think, unfortunately, as more of the impacts of climate change are more regularly felt in other parts of the country, the emphasis on technology that helps with resilience is going to go further and become more of a widespread political demand,” he added.

Microgrids promise to help: “There’s a lot of advantages of moving generation very close to where it’s consumed,” Feasel said. “It’s much more efficient because there are no losses.”

And, he added, the grids tend to be more resilient to disasters because, for instance, heavy wind on one part of the grid is less likely to knock out power to customers miles away. This was exemplified by the Blue Lake Rancheria tribe in Humboldt County, Calif., which built a microgrid that served not only the tribe itself but also about 10 percent of the surrounding community during wildfire-related power shutoffs in 2019.

Even so, microgrids face challenges, most notably that those utilizing renewable resources mostly rely on batteries for energy storage, which simply do not last that long. And as Lovering noted, microgrids to date have mostly been powered by natural gas or diesel generators.

Related: Throughout the Trump Years, Renewables Sector Has Employed Nearly Three Times as Many People as Fossil Fuels Industry

Especially in a system dominated by investor-owned utilities that monopolize transmission lines, Kadish said he has a hard time imagining microgrids saturating the country in short order.

But as they are used more widely in places like Hawaii and Puerto Rico where their scale makes more sense, he said, their efficacy is likely to incentivize innovation in microgrids in other contexts, especially in underserved communities where power access is unaffordable or scarce.

In the long term, the reliability of microgrids — especially of renewable systems — is itself dependent on another grid-edge technology: battery storage, which is also proving indispensable to investor-owned utilities integrating renewables into the larger grid.

However, Casey Herman, head of power and utilities for PwC U.S., said that while battery storage is not a “silver bullet” for resilience as the grid changes, its increasing affordability will have bearing on how quickly the country gets to a net-zero power sector.

According to Sheth, promoting battery storage technology via a tax credit is an option that has begun to get bipartisan traction in Congress. Among its recommendations to both Congress and the Biden administration, the Energy Storage Association has pushed for energy storage to be made eligible for clean energy investment tax credits both as a standalone asset and as a retrofit for existing resources.

This comes as a new report from Princeton University suggests that a surge in battery storage capacity in the United States will be an inevitable consequence of all potential paths to a net-zero economy, aside from one projecting no change from current policies (Path REF). 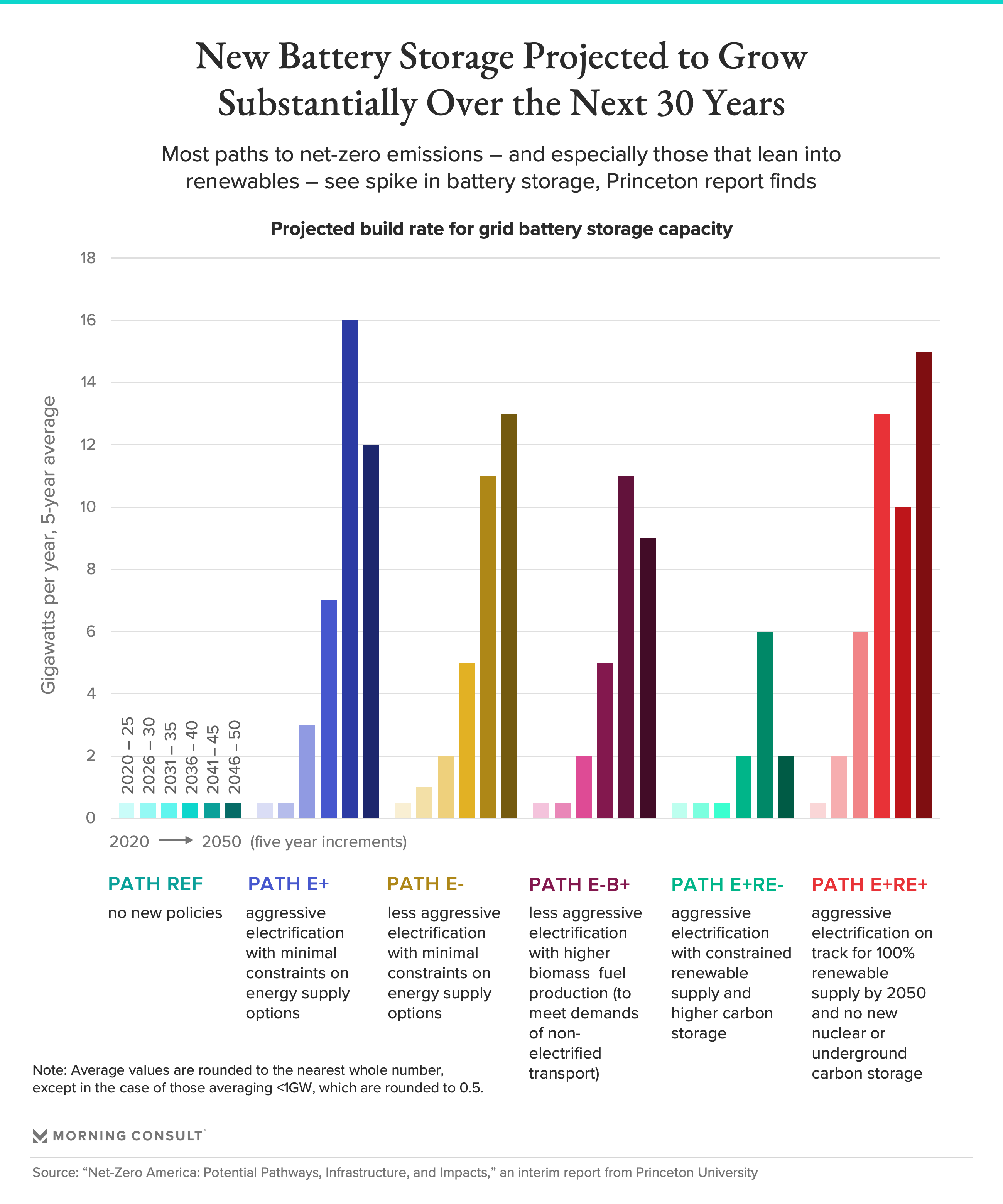 The study — funded in part by BP PLC and Exxon Mobil Corp. — concludes that the United States has multiple paths to a net-zero economy, though all will require enormous infrastructure investment; the authors found it is feasible for at least 90 percent of the nation’s electricity to come from renewable sources by 2050.

Battery storage, Glassmire said, “is this linchpin in the future of our energy supply, in light of not only the load side from this threat of climate change, but also in terms of integrating this cheap energy source that we’re increasingly putting out there.”

In concrete terms, Neva Espinoza, vice president of energy supply and low-carbon resources at the Electric Power Research Institute, argues that battery storage on the grid needs to essentially double in the next decade in order to integrate the amount of renewable energy that Biden and others are pushing.

She emphasized that as the country’s energy systems — with electric vehicles, etc. — become increasingly reliant on the grid, the flexibility that storage allows will beget resilience, a priority that she concurs will be a larger part of the conversation moving forward.

And while certain energy sources — be they solar, wind, geothermal or even natural gas — are seen as particularly attractive in any given moment, Espinoza said maintaining “optionality” will be crucial as technologies continue to develop.

“Every time an option comes off the table, that inherently makes us a little less resilient; it inherently takes away competition for technologies moving forward,” Espinoza  continued. “The more options you leave on the table, the more likely you are to achieve any of those commitments or promises in the time frame that’s out there and in an affordable, reliable way.”