Will Live Sports Viewership Rebound in 2021? Polling Offers Some Clues 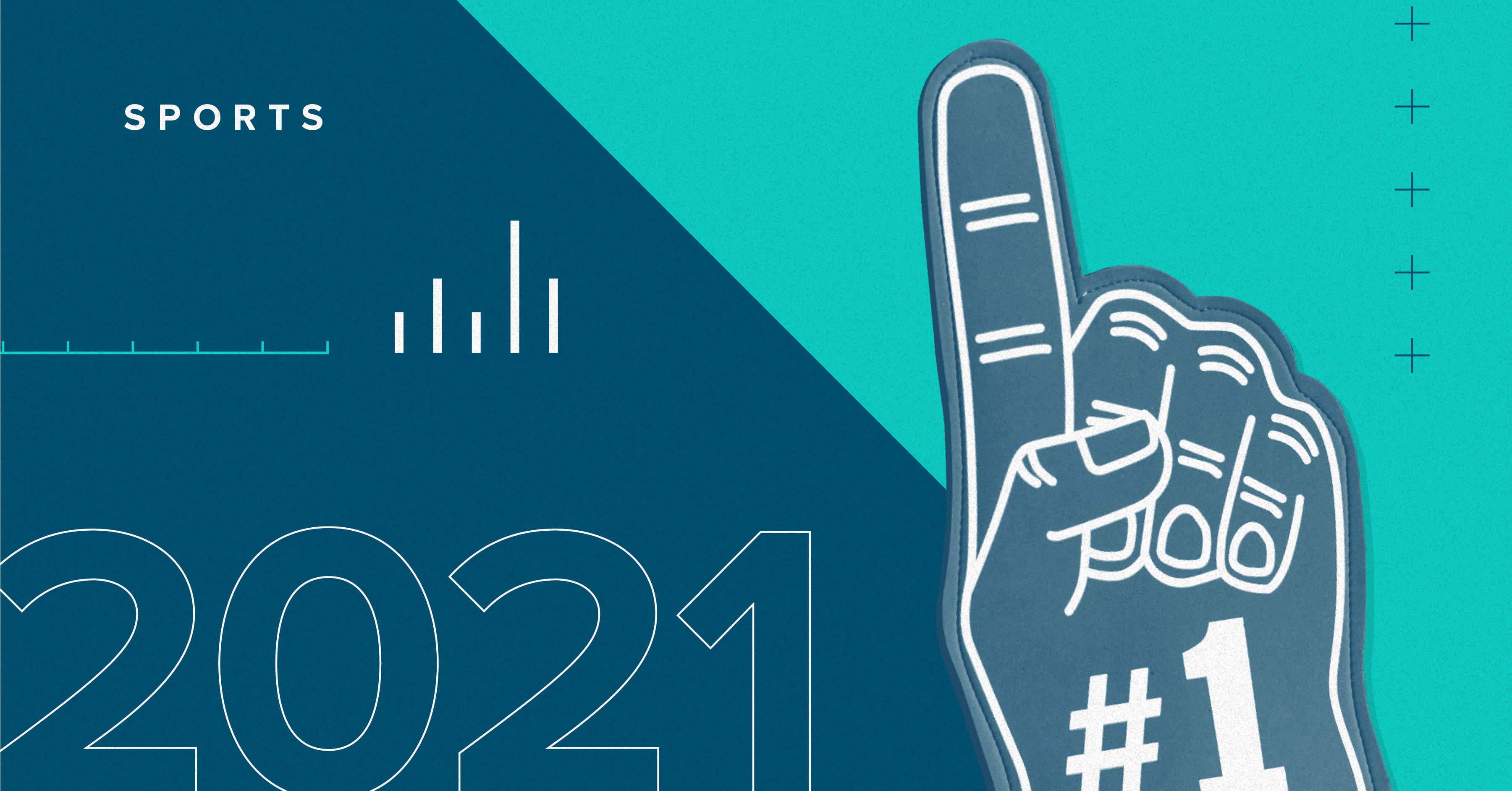 Even during the darkest days of the 2020 sports shutdown, industry insiders and observers were optimistic about the potential for ratings growth once live events returned, suggesting that sports-starved fans stuck in their homes due to the pandemic would devour hours of competition on TV. 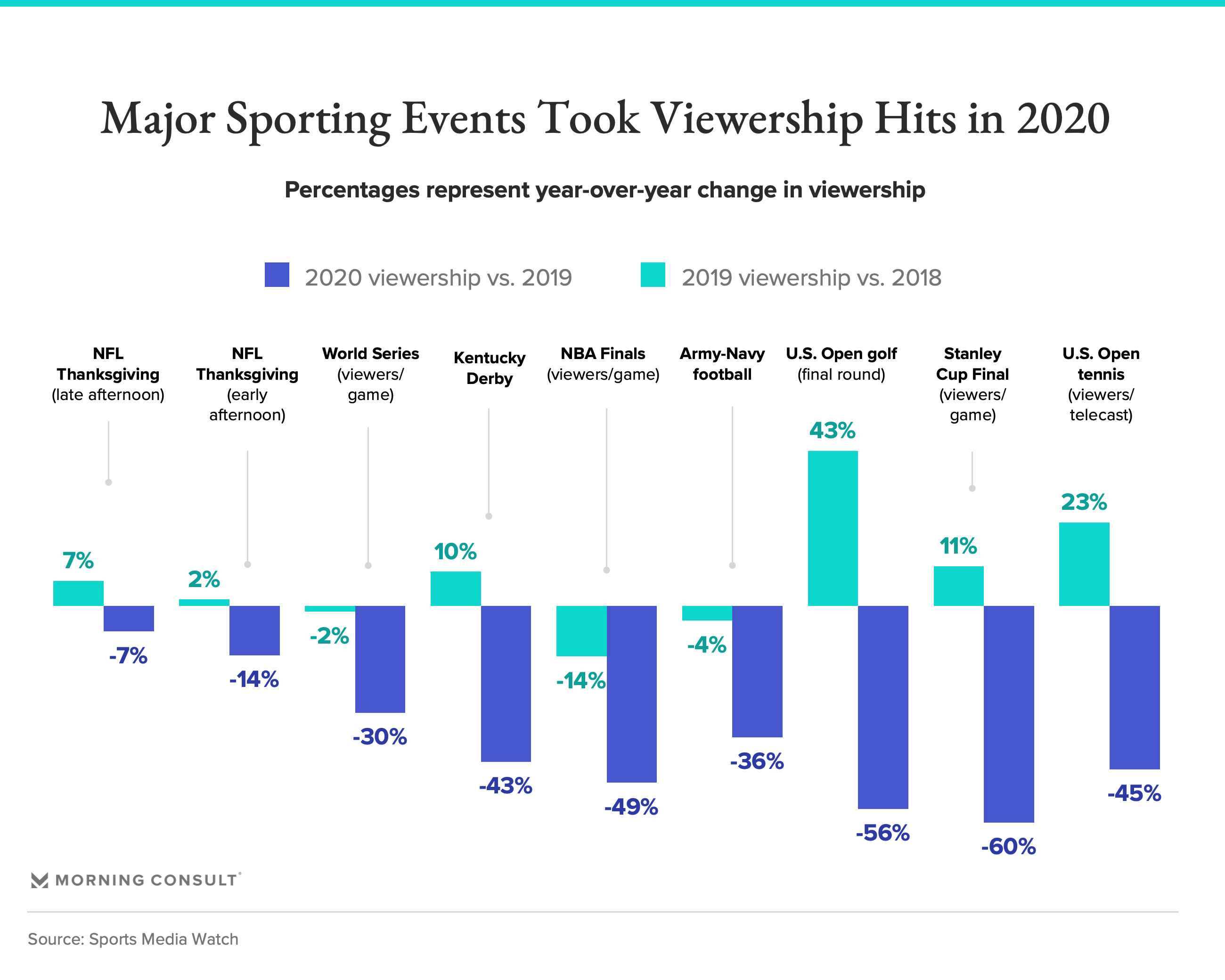 Those hopes failed to materialize, dashed by double-digit year-over-year viewership drops for marquee events such as the NHL’s Stanley Cup Final, the NBA Finals and MLB’s World Series. The pandemic’s negative impact on sports ratings could be seen as recently as this month’s Army-Navy game, for which viewership dropped 36 percent from the year before amid uncharacteristic competition from a crowded slate of college football matchups.

There’s been no shortage of opinions and think pieces seeking to explain the cause of the staggering declines and what they mean for the future of sports media. Over the past several months, Morning Consult has conducted research aimed at answering both of those questions. Provided with a blank space, respondents offered a multitude of reasons for changes in their viewing habits and provided some clues about the potential for a viewership rebound in 2021.

In a Dec. 1-4 Morning Consult poll, 28 percent of U.S. adults — including roughly a third of self-identified casual sports fans — said they have spent less time watching sports in recent months than prior to the pandemic.

Patrick Crakes, principal at Crakes Media Consulting and a former Fox Sports executive, said casual sports fans are the difference between strong and weak viewership for major mainstream sporting events. While they are interested in watching the most compelling sports content, he said, they aren’t basing their schedules around it or going out of their way to find it, and they are also open to other entertainment options. 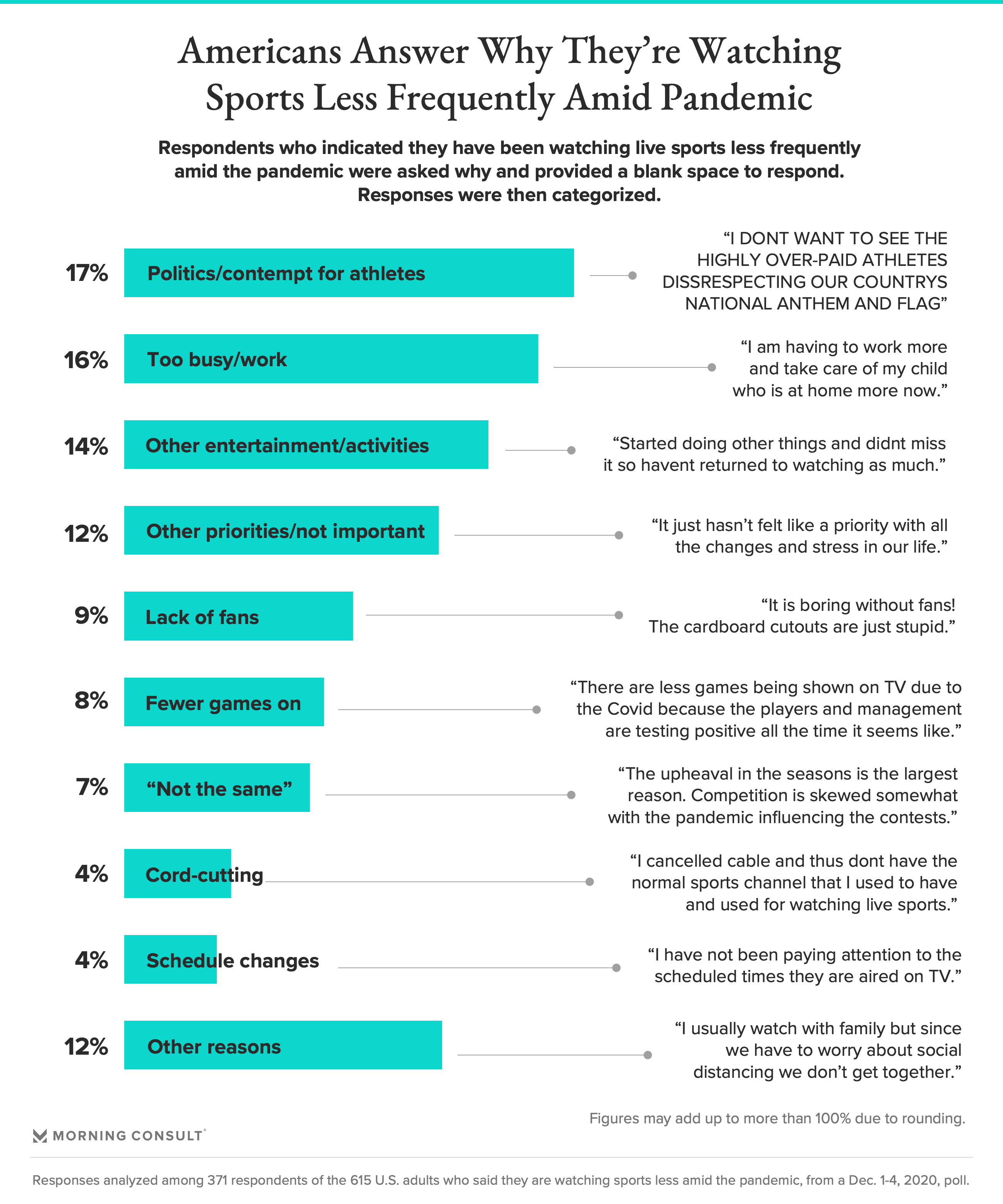 Respondents who said their sports viewership had decreased cited a wide range of causes. Of the 371 respondents who provided comprehensible answers, 17 percent cited a belief that sports had become too political or expressed contempt toward athletes for their opinions on social issues or being “overpaid.” While not directly related to the pandemic, the surge in social justice activism following the May killing of George Floyd happened to coincide closely with sports’ return to play, which may have alienated a portion of the potential audience.

Other common themes in the open-ended responses were more closely related to the COVID-19 pandemic and its impact on consumers’ lives and routines, including being busier or working more (16 percent), finding other forms of entertainment or activity (14 percent) and feeling that sports was no longer a top priority (12 percent). 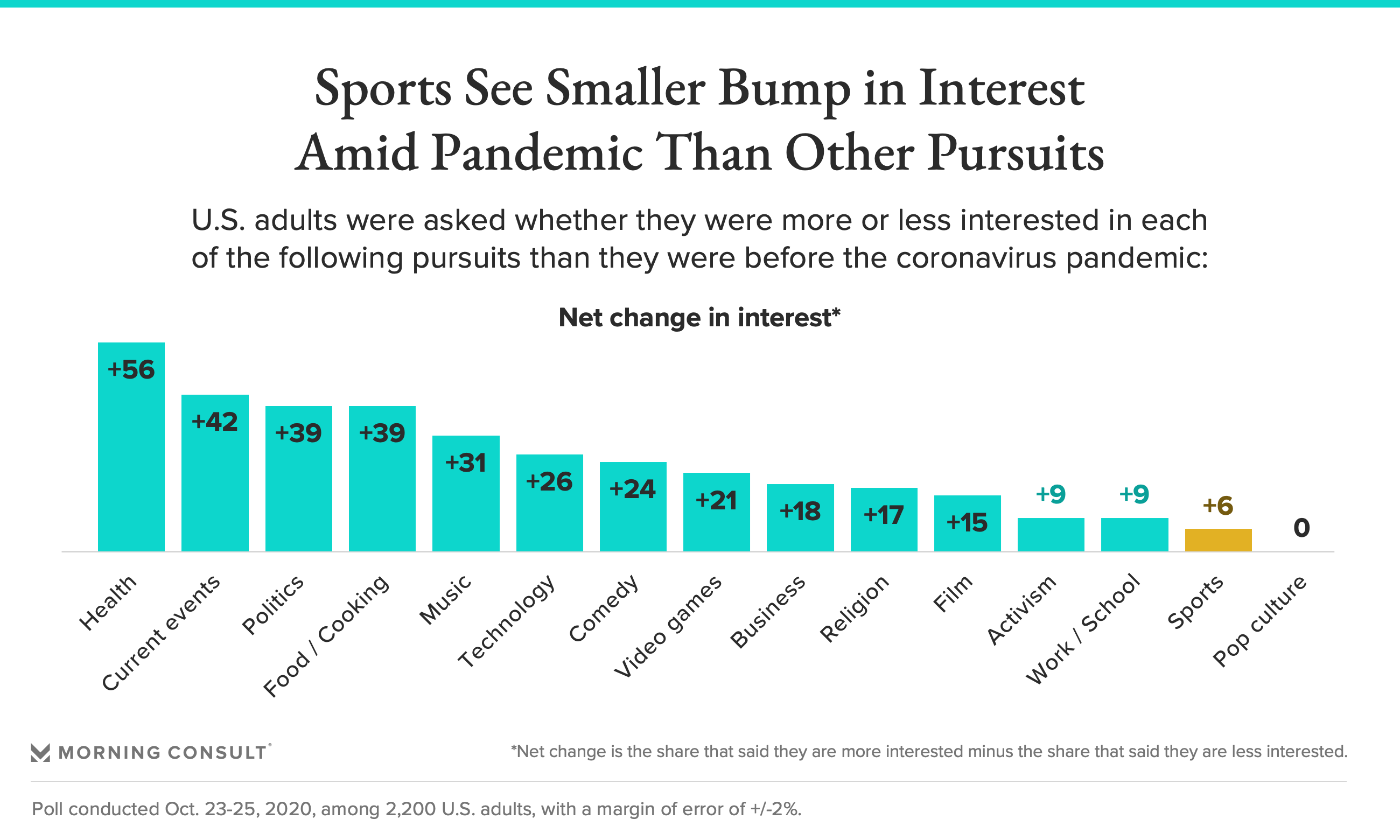 In an October Morning Consult poll, U.S. adults were asked whether they were more or less interested in sports than before the pandemic. The share who said they had become more interested was 6 percentage points larger than the share who said they had lost interest. That growth, however, paled in comparison to other pursuits, such as health, current events, politics, cooking and music, each of which saw a net increase in interest of 31 points or more.

Unlike casual sports fans, more than half of self-identified avid fans said they have watched more sports compared to the time before the shutdown. Crakes and other experts noted, however, that pandemic-induced schedule changes mean even these viewers have been forced to choose or split their time between several events being held simultaneously.

“Ratings are a function of reach and time spent,” Crakes said. “If somebody watches a sport for 15 minutes and then starts watching it for 13 minutes and puts their viewing attention for those few minutes somewhere else — if that happens over time, ratings will go down.”

Still, there are reasons for industry optimism. With the rollout of COVID-19 vaccines potentially ushering in an eventual return to “normal,” experts are confident about the outlook for sports viewership’s return to its pre-pandemic trajectory.

Networks can likely expect a return to “low single-digit declines” after the pandemic as opposed to the large double-digit dips of 2020, said Joe Brown, a former NBC Sports researcher and audience analyst who has since founded JWB3 Media Insights. He said he expects “2020 to be somewhat of an outlier.”

But Brown cautioned that the “major headwinds in the media landscape” that were present pre-COVID aren’t going anywhere. “Everything we’ve been facing in terms of cord-cutting and just more entertainment options are still going to be there.”

Lee Berke, president and CEO of LHB Sports, Entertainment & Media, Inc., said he believes the landscape will improve as the year progresses.

“It seems like by the third and fourth quarter, you should have something closer to normal in terms of how leagues can offer up their product,” Berke said. “By the end of ‘21, then into ‘22, theoretically every week is hopefully better.”

In the Dec. 1-4 poll, respondents offered little indication that they expect to watch sports more frequently following the pandemic. But Crakes suggested that as long as live sports continue to account for an outsize share of television viewership relative to other programming, top-tier sports properties will continue to command increased rights fees, and media companies will find demand for advertising during sporting events.

Lower ratings don’t “necessarily mean that much for the business,” he said, “if the share of viewing for sports is going to increase.”