Trump Is Leaving the White House, but No One Expects Him to Go Away

No. 45’s influence -- and unique willingness to wield it -- is set to linger into his successor’s term 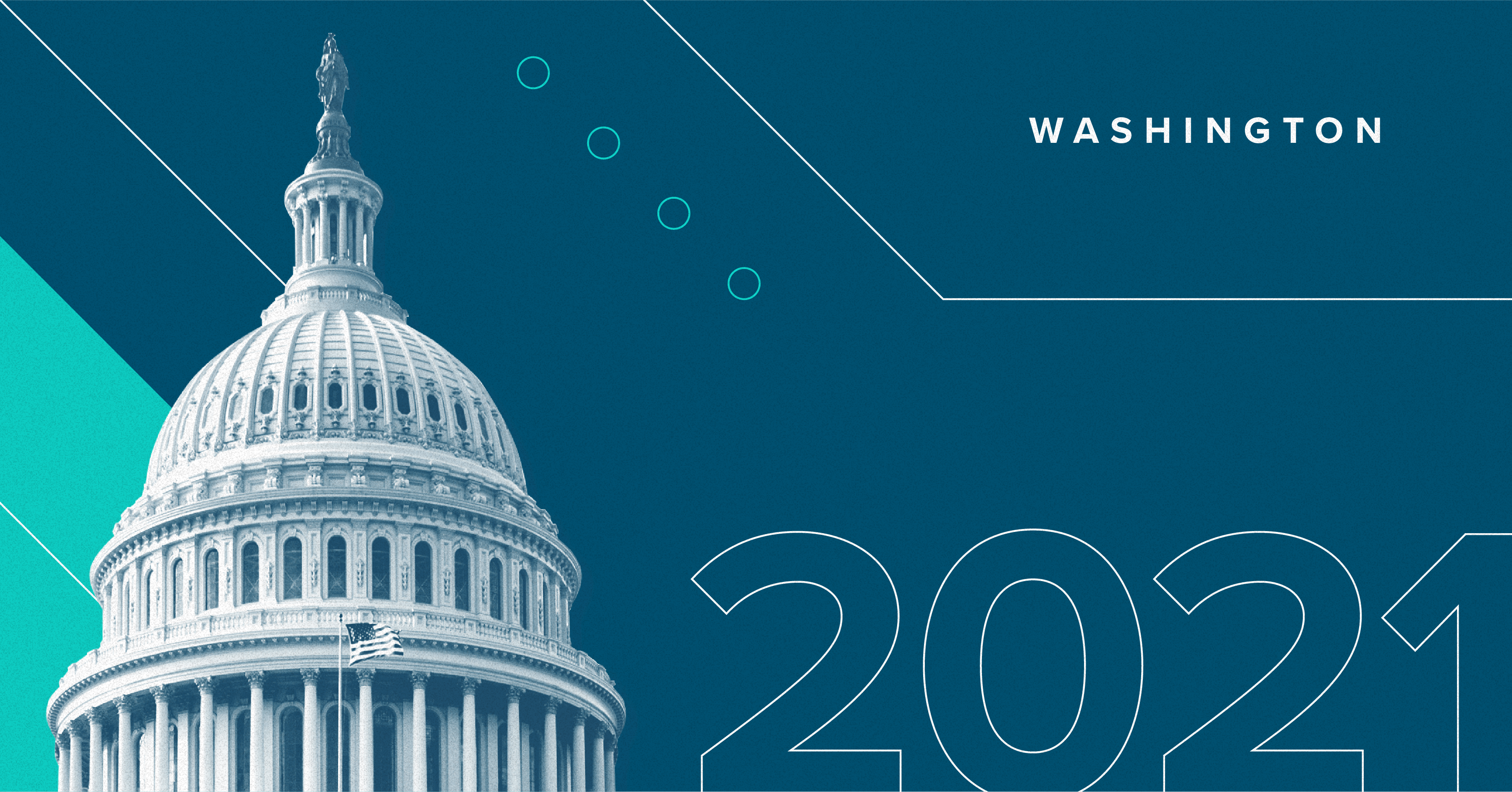 While President Donald Trump lost the election to Joe Biden, the aftermath of Election Day provides an early indicator of his staying power in the country’s political psyche.

There was the reticence or outright refusal by many Republican leaders to acknowledge Biden’s victory, the calls from Georgia’s two Republican senators for Georgia’s Republican secretary of state to resign after he stood up in defense of the integrity of the state’s election system, and the nearly 150 Republican officials who signed onto a lawsuit looking to overturn Biden’s victories in key swing states at the Supreme Court.

“He’s a lame-duck president and he’s still got members of Congress and attorneys general falling over themselves,” said Republican strategist Scott Jennings in an interview before the court rejected the case. “That’s influence.”

Interviews with more than a dozen strategists involved in every level of American politics on both sides of the aisle reveal a prevailing expectation that Trump — still the most popular figure in the Republican Party — will maintain his enormous influence once he leaves office and lead an unprecedented post-presidency period.

“Trump remains the dominant figure in Republican politics who can and will command media presence whenever he wants, and has an extremely loyal following,” said Doug Heye, a former high-level staffer for the Republican National Committee and former House Majority Leader Eric Cantor (R-Va.) who endorsed Biden ahead of last month’s election. “Four years of being the president, which comes with more than $200 million raised since the election, however many Twitter followers he has now — that’s real.”

And contrary to his predecessors’ inclinations to step back from the spotlight, people close to the president’s political apparatus expect the longtime celebrity to remain laser-focused on garnering coverage, casting his shadow over the national political calculus.

For Democrats, that means the continuation of a tried-and-true bogeyman that has helped to energize their political efforts, while for Republicans, it sets the stage for rising GOP stars and budding candidates in Republican primaries to try to emulate and woo Trump in their own ways as he plays kingmaker, with the threat of another bid for the White House hanging over it all.

Despite his loss to Biden, Trump holds enormous sway over Republican voters. He outperformed his standing in polling in the leadup to the 2020 election and picked up 11 million more votes than he did when he won the presidency in 2016. Morning Consult Political Intelligence tracking conducted Dec. 11-13 found 87 percent of Republican voters hold favorable opinions of the president, including 3 in 5 who view him “very” favorably — unchanged since Nov. 7, the day it was clear Biden was president-elect. 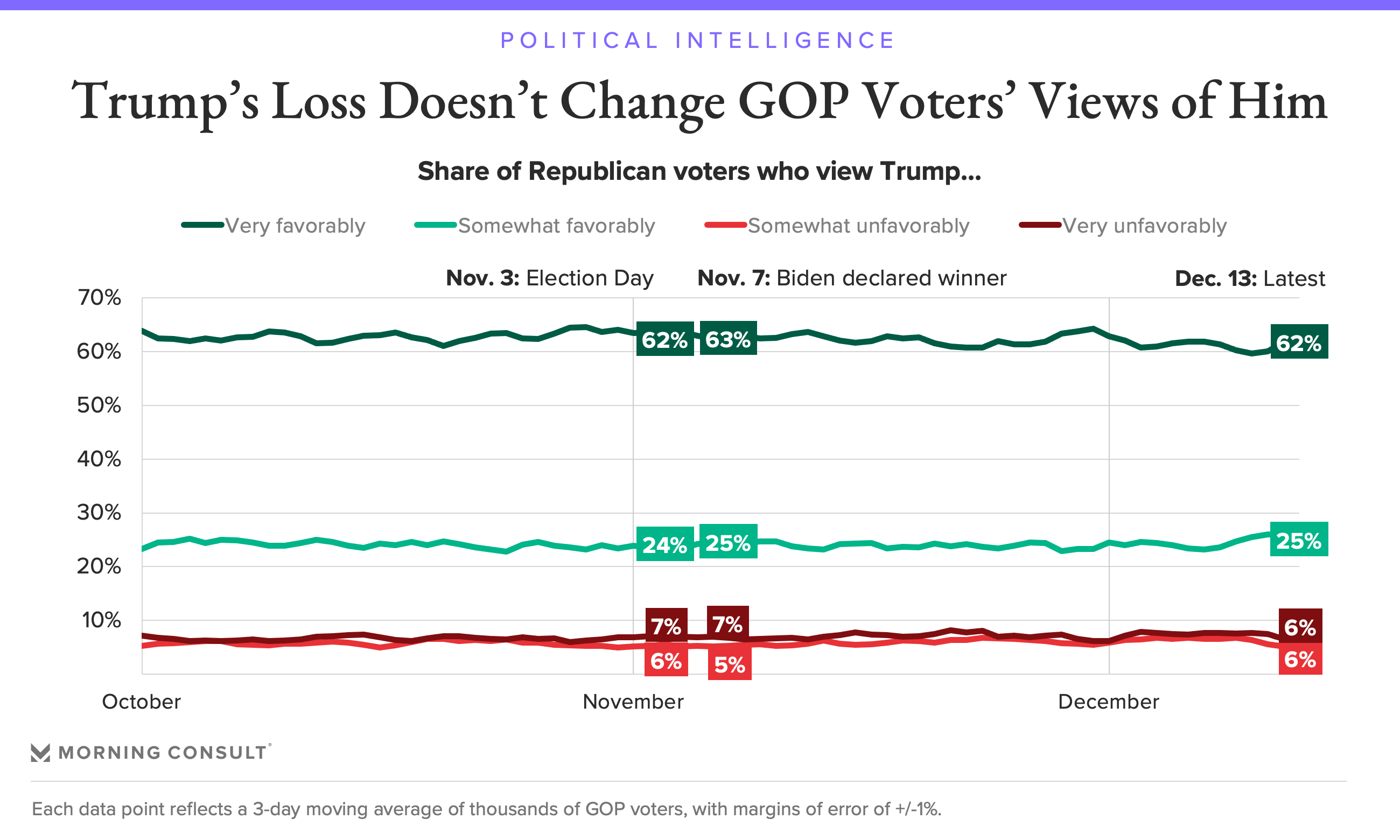 Morning Consult/Politico polling in mid-November pegged Trump as the prohibitive favorite in a hypothetical 2024 presidential primary. The survey also found Republican voters believe Trump to be more aligned with the country’s and the GOP’s best interests compared to Republicans on Capitol Hill.

“Where you see the real excitement and energy within the party for the future is with people like Dan Crenshaw, Tim Scott, Josh Hawley — people of that younger generation that speak to working-class voters and can talk to Black and Hispanic communities,” said Gregg Keller, a Trump-supporting Republican strategist and former executive director of the American Conservative Union. “But Trump is the 800-pound gorilla. To be clear, if Trump were to decide to run again, it would be difficult or impossible to defeat him in the primary.”

While some in recent years have posited that a failed re-election bid may weaken Trump’s standing with the base, much of the evidence gathered in recent weeks suggests otherwise. His attacks against Fox News, must-watch television for the conservative faithful, dampened the network’s favorability among Republican voters, according to Morning Consult Brand Intelligence data. He also waged a rhetorical war against Georgia Gov. Brian Kemp, whom he effectively accused of ducking a challenge to Biden’s victory in the state, and boasted about the quick damage it inflicted on the Republican’s approval rating.

Trump’s grip on the base also has its upside for Republicans: He continues to be a force in campaign fundraising as the party works to erode Democrats’ advantage with small-dollar efforts. Gerrit Lansing, president of the GOP fundraising platform WinRed, said while others in the party have made up ground in the space, Trump is the best online fundraiser in politics, and he expects that to continue.

“Candidates can go out and use Trump imagery and say, ‘I’m with Trump and, in fact half, of the donation you make to me will go to Trump and my campaign.’ Trump can do the opposite, and send an email out saying, ‘I’m supporting this person,’” he said. “I think that’s a big part of their plan — make these endorsements and drive donations.”

Charlie Black, a Washington lobbyist with extensive experience in presidential politics, said the January runoffs in Georgia, where Republican Sens. Kelly Loeffler and David Perdue are defending seats that will decide which party holds a majority in the chamber for the first two years of Biden’s presidency, mark an early test case for whether Republicans can “manage the enthusiasm” Trump brings to the table without him on the ballot, with an eye toward the 2022 midterm elections.

“It’s not directly analogous, because special elections have low turnout,” Black said. “But when the Trump people come out and vote, they’re almost unanimously Republicans.”

Related: Polling Shows Why Trump Will Retain His Bully Pulpit With the GOP Base Even After He Leaves Office

Michael Steel, worked for former House Speaker John Boehner (R-Ohio) and on Jeb Bush’s 2016 presidential campaign, said potential issues on the horizon — such as the possibility of legal or financial difficulties for Trump — could reduce the president’s influence, though they did not while he was in office. But the Trump era, he said, has yielded wins for the GOP: Republicans have held the Senate with his help, and in 2020, they made up some of the ground they lost in the House and expanded a hold in state capitals.

“It’s not the party I would have predicted, but it’s been successful thus far,” said Steel. “The question is whether the party can take the durable, popular pieces of the president’s agenda and marry them to smart, effective policies and put forward a forward-looking agenda that helps them do better among younger voters and others.”

When Trump is engaged, he has mobilized rural Americans on the party’s behalf, something that eluded other recent Republican nominees such as John McCain or Mitt Romney, and has drawn to the party Americans — often white, but not exclusively — who don’t have college degrees.

“There’s been this caricature of Republicans for some time that, as a party, we can’t reach out to the working-class and blue-collar voters,” said Keller. “That has changed dramatically, and it really gives us an opportunity to cast Democrats as the party of the coastal elite and antifa.”

But with Trump, “there’s always this equal and opposite reaction,” said Meredith Kelly, a strategist who led communications for the Democratic Congressional Campaign Committee during its successful 2018 effort. 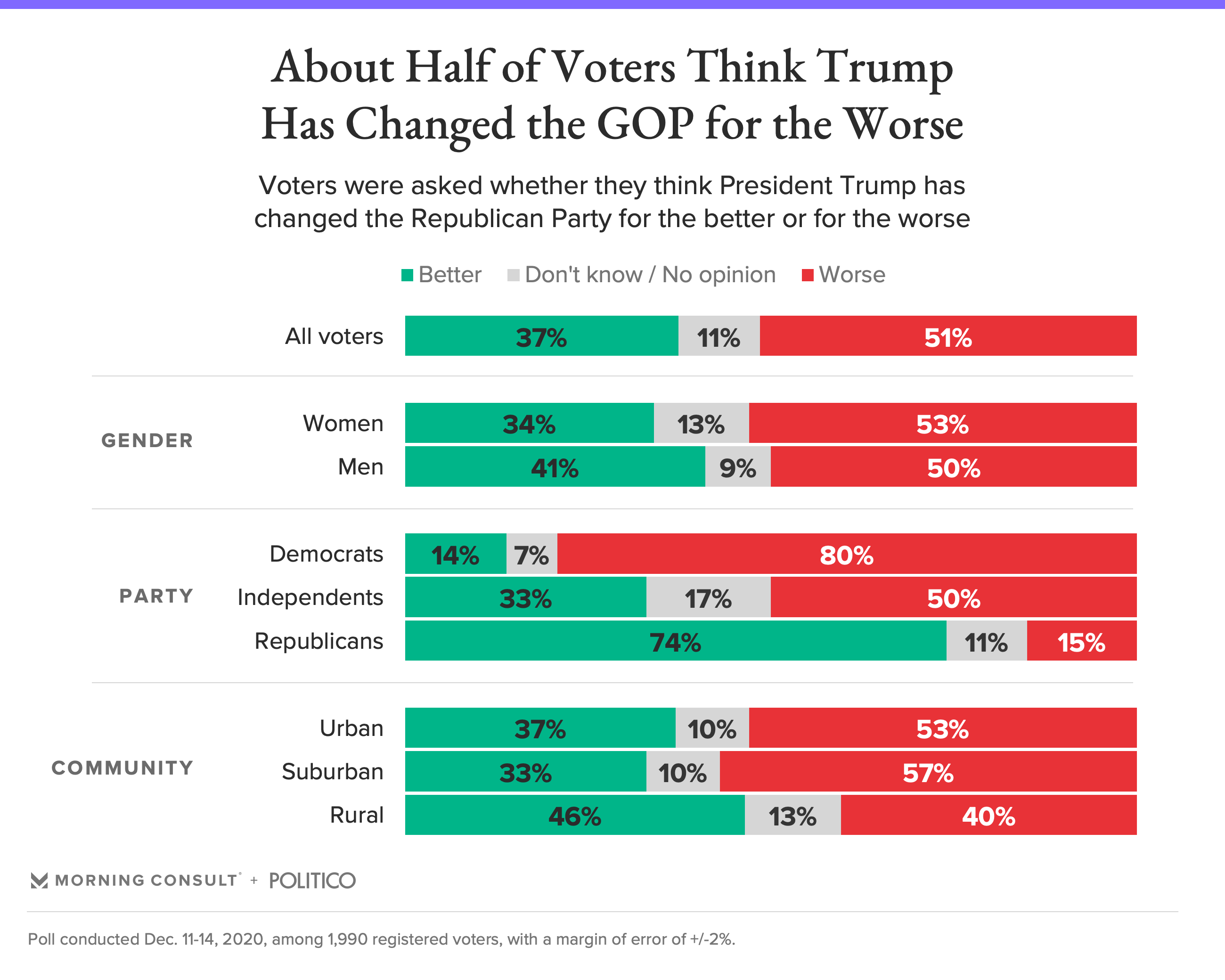 According to a recent Morning Consult/Politico poll, 51 percent of voters — including 80 percent of Democrats and 50 percent of independents — say Trump has changed the Republican Party for the worse, compared with 37 percent of all voters and 74 percent of Republicans who said he has changed it for the better.

Along with forcing women, educated voters and those in the suburbs who were turned off by Trump’s brand of politics to give the Democratic Party another look, Kelly said his continued presence on the stage moving forward will provide the Democratic Party a villain to keep a fire under the resistance rage — negative partisanship at play in 2020 — that has helped to bankroll campaigns, hold the House and sweep the president out of office.

Heye, a former fellow at the Harvard University Institute of Politics, said that dynamic will be a paramount issue for the GOP in the coming years.

“We’re still hemorrhaging support from women, and we’ve spent four years basically telling younger voters who aren’t so young anymore that not only do we not agree with them on some of their more signature issues, but we don’t even acknowledge the issues,” he said. “Long term, that’s not sustainable.”