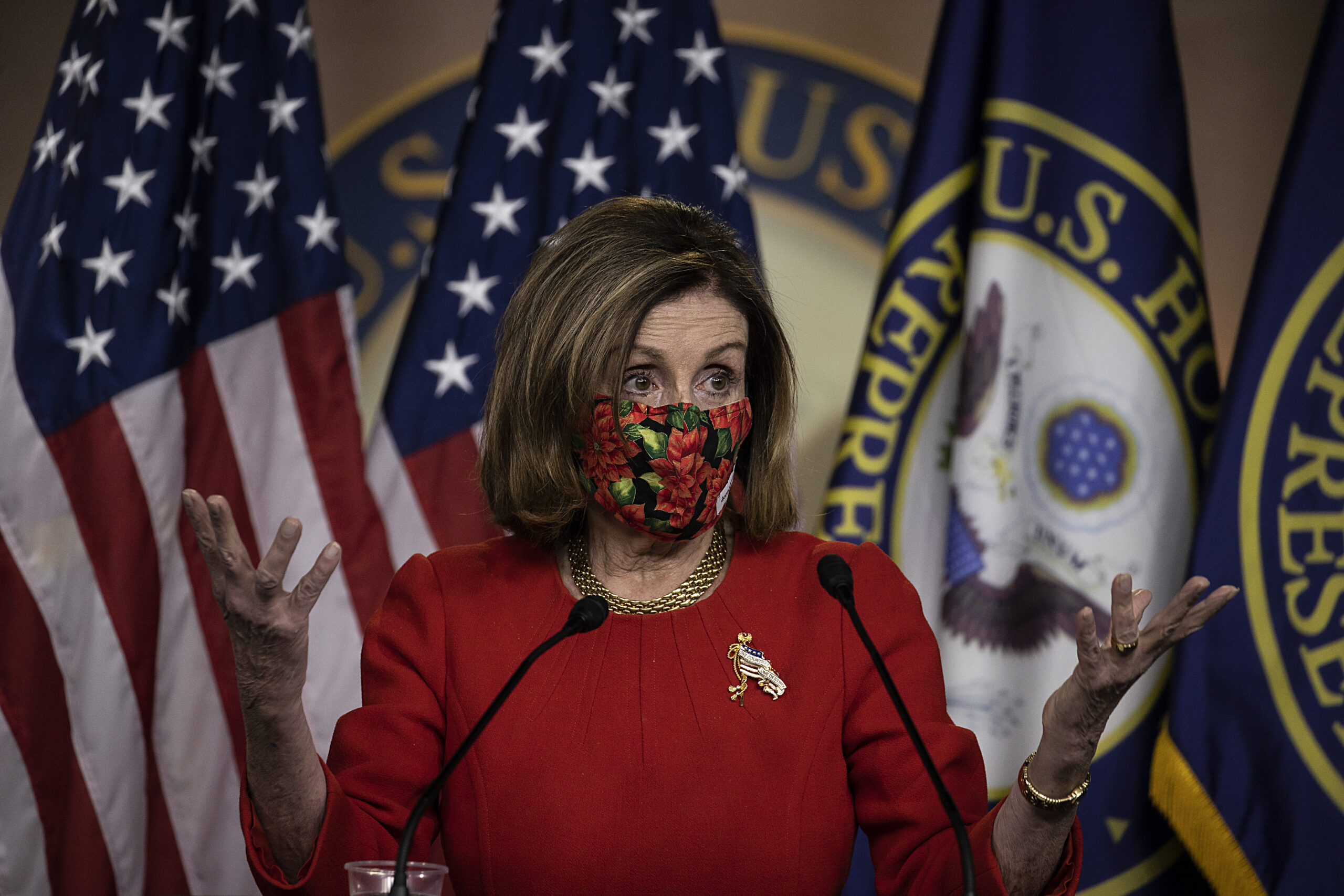 Speaker of the House Nancy Pelosi (D-Calif.) speaks during a press conference on Capitol Hill on Dec. 20, 2020 in Washington, D.C. A slim majority of Democratic voters say the California lawmaker should retain the speaker's gavel in the 117th Congress. (Tasos Katopodis/Getty Images)
By Cameron Easley

House Democrats’ underperformance in the 2020 elections leaves Speaker Nancy Pelosi with little breathing room for the chamber’s January vote to decide whether she retains the gavel in the 117th Congress. New Morning Consult/Politico polling shows a slim majority of Democratic voters believe that the longtime California lawmaker should remain in charge.

Fifty-three percent of Democrats in the Dec. 18-20 survey said House Democrats should keep Pelosi as speaker, while a third said the caucus should choose someone else. Among all voters, 56 percent said Democrats should find a new leader. 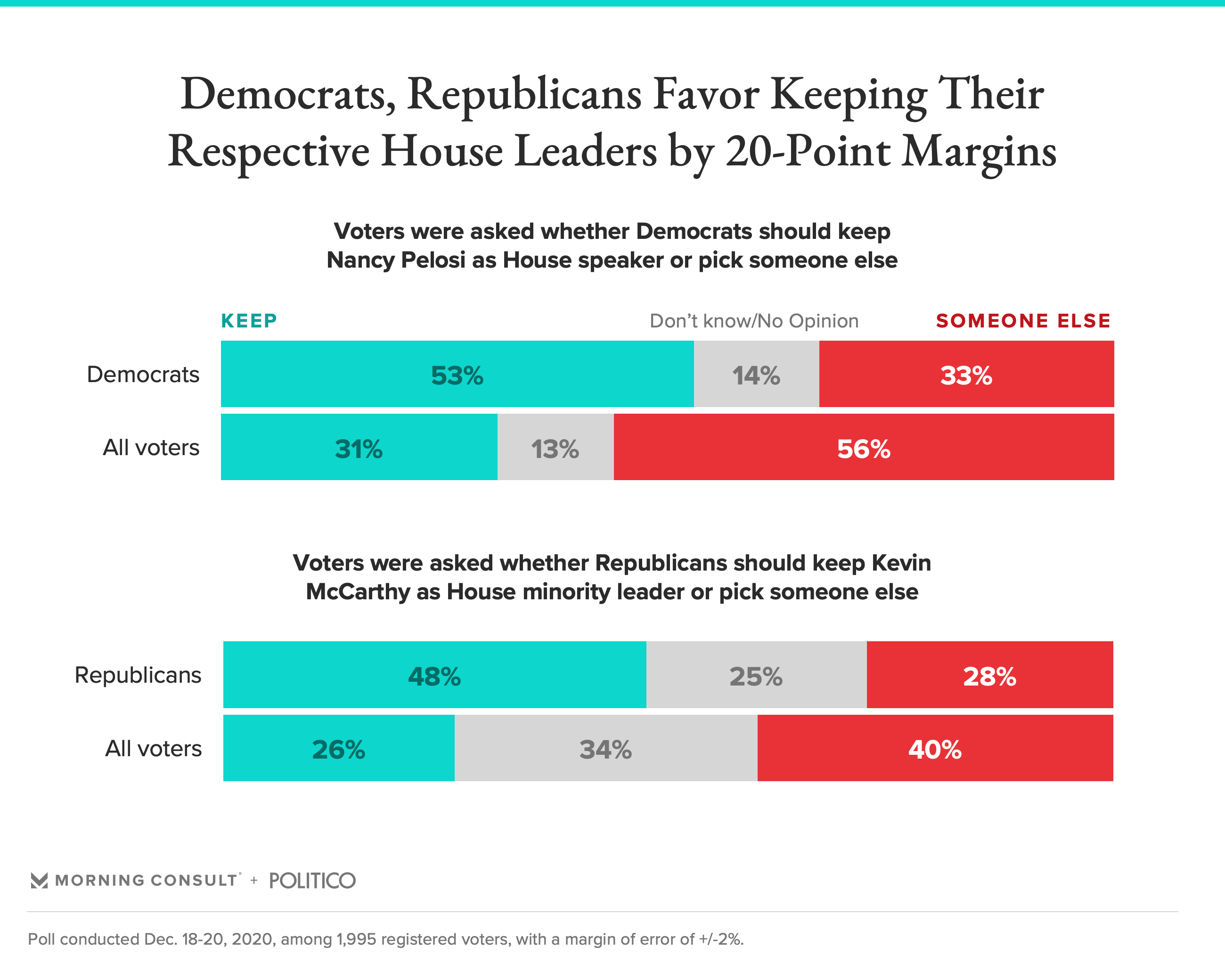 Similarly, 48 percent of GOP voters said Republicans should keep Rep. Kevin McCarthy (R-Calif.) as House minority leader, compared with 28 percent who preferred to see the House GOP elect a new leader. The poll of 1,995 registered voters has a top-line margin of error of 2 percentage points, while responses from Democrats and Republicans carry 3- and 4-point margins of error, respectively.

Technically, Pelosi and McCarthy — as well as Senate Majority Leader Mitch McConnell (R-Ky.) and Senate Minority Leader Chuck Schumer (D-N.Y.) — have already been re-elected by their caucuses for another term. But in Pelosi’s case, House rules dictate that speakers must garner 218 votes on the floor — a majority of the chamber.

Most nonpartisan elections analysts projected that House Democrats would add at least a handful of seats to their column during the 2020 elections. Instead, the GOP ate into their ranks, picking up at least 10 seats. As a result, Pelosi will not be able to afford many defections for January’s vote if she hopes to maintain her grip on the chamber.

Related: Trump Is Leaving the White House, but No One Expects Him to Go Away

Some House Democrats have spent recent years calling for change at the top: In a recent interview with The Intercept, progressive Rep. Alexandria Ocasio-Cortez of New York said that it was time for Pelosi to step aside, but lamented the lack of viable alternatives to fill her shoes and noted that “there are so many nefarious forces at play to fill that vacuum with something even worse.”

In the aftermath of the November elections, some moderate House Democrats voiced concerns  that the public perception of the caucus as too liberal had cost the party seats in the contest, though those types of broadsides were generally reserved for Ocasio-Cortez’s wing of the party. Findings from the latest survey suggest that voters tend to view Pelosi as representative of Democrats in Congress, mirroring a conclusion from July 2019. 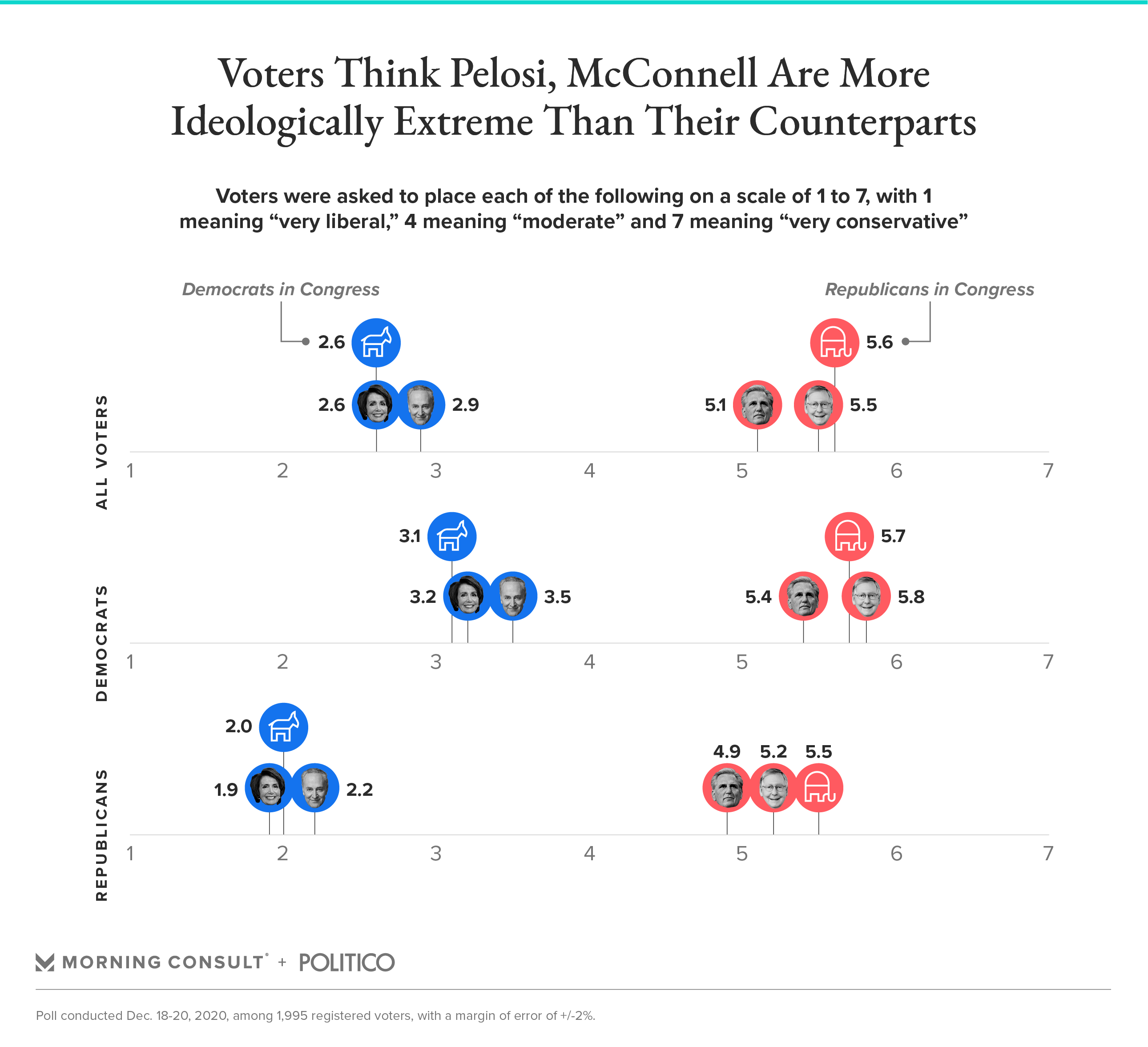 Asked to position Congress’ so-called “big 4,” as well as the broader cohort of members, on an ideological scale ranging from “very liberal” to “very conservative,” voters placed Pelosi and Democrats in Congress at the exact same point on the spectrum. It was a similar story for McConnell: He, who along with Pelosi is more well-known than Schumer or McCarthy, was pegged at virtually the same spot as the congressional GOP.