Spoiler Alert: Spoilers Can Be Good for Business

Roughly half of the country seeks out spoilers, partly to decide whether something’s worth watching 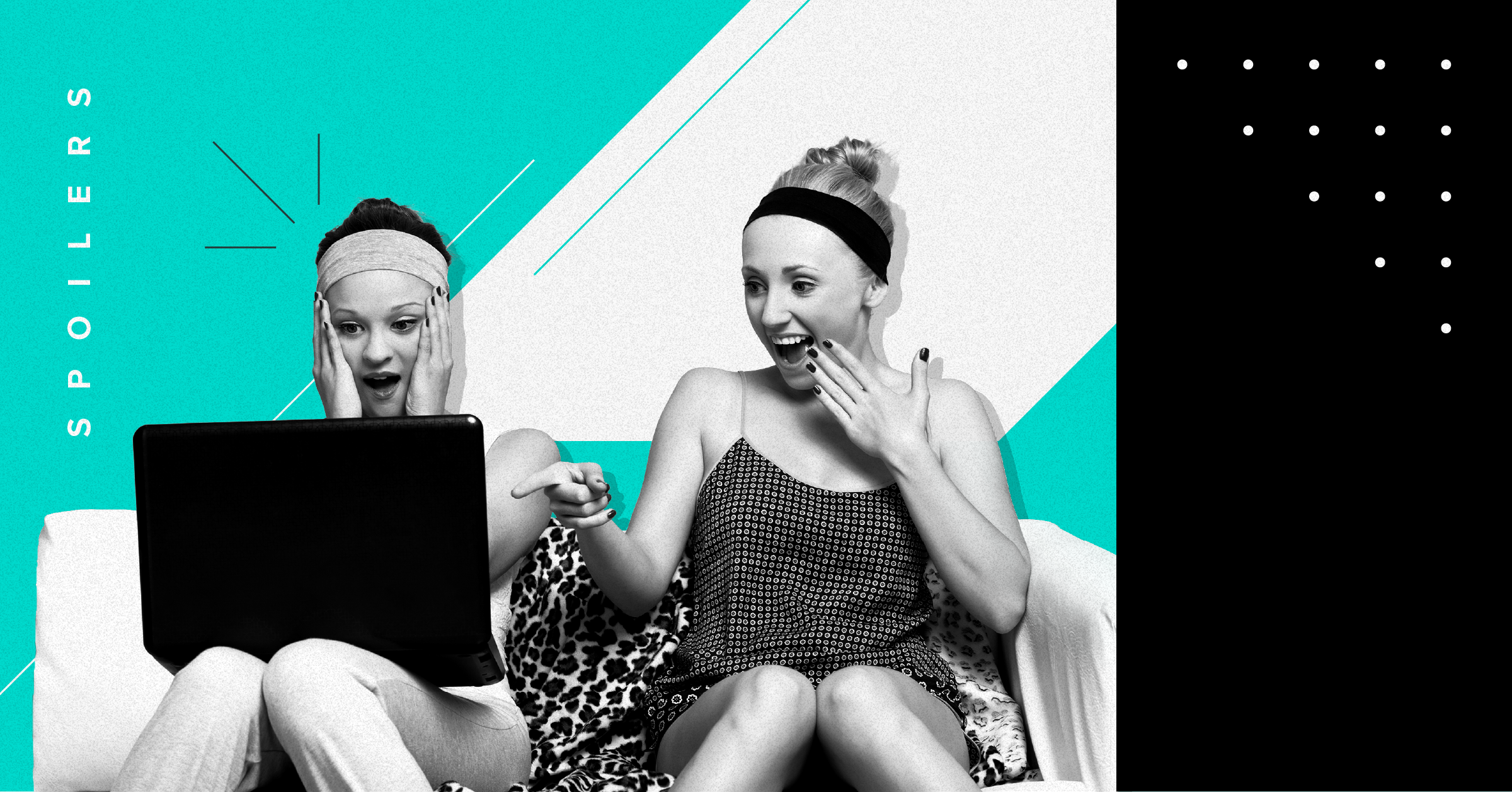 On average, 45 percent of survey respondents said they look for spoilers for either movies, TV shows or sporting events. (Getty Images / Morning Consult Illustration by Tadiana Martinez)
By Sarah Shevenock

While Annemarie Navar-Gill prowls Reddit and discussion forums for spoilers of “The Bachelorette,” Hayley Rozman tries to dodge them on her social media feeds.

Navar-Gill, an assistant professor in communications at Old Dominion University, said it’s difficult to watch reality TV programs, such as “The Bachelor” franchise, without spoilers. Knowing who “wins,” along with understanding contestants’ roles — who’s the villain, who’s the nice one — improves her overall experience, Navar-Gill, 32, said.

But Rozman, a longtime “Bachelor” fan who works in advertising, finds trying to navigate viewing and discussing the show frustrating when so many spoilers are out there. Even Twitter can be a risk, with its potential exposure of upcoming plot points she’s trying to avoid, although the 25-year-old Chicago resident admits she has mixed feelings when she does stumble upon those undesirable tidbits.

“It makes me intrigued because I’m excited if it’s going to be something dramatic,” Rozman said. “But I also feel disappointed because I’m like, ‘Oh, I already know who gets sent home.’”

The concurrent rise of streaming services and social media has elevated spoiler culture beyond dodging colleagues at the office water cooler if you didn’t watch “Lost” the night before. With viewers now able to watch at their own pace and talk about anything — unfiltered — at any moment, spoilers have become even more contentious.

And as spoiler culture has evolved, it’s become an important marketing tool for the entertainment industry.

“Spoilers can be effective in building viewer loyalty by making fans feel like they are ‘insiders,’” Brian Bauer, president of Bauer Entertainment Marketing, said in an email. Spoilers can generate buzz and drive viewers to watch week after week to see the official reveal, he added. 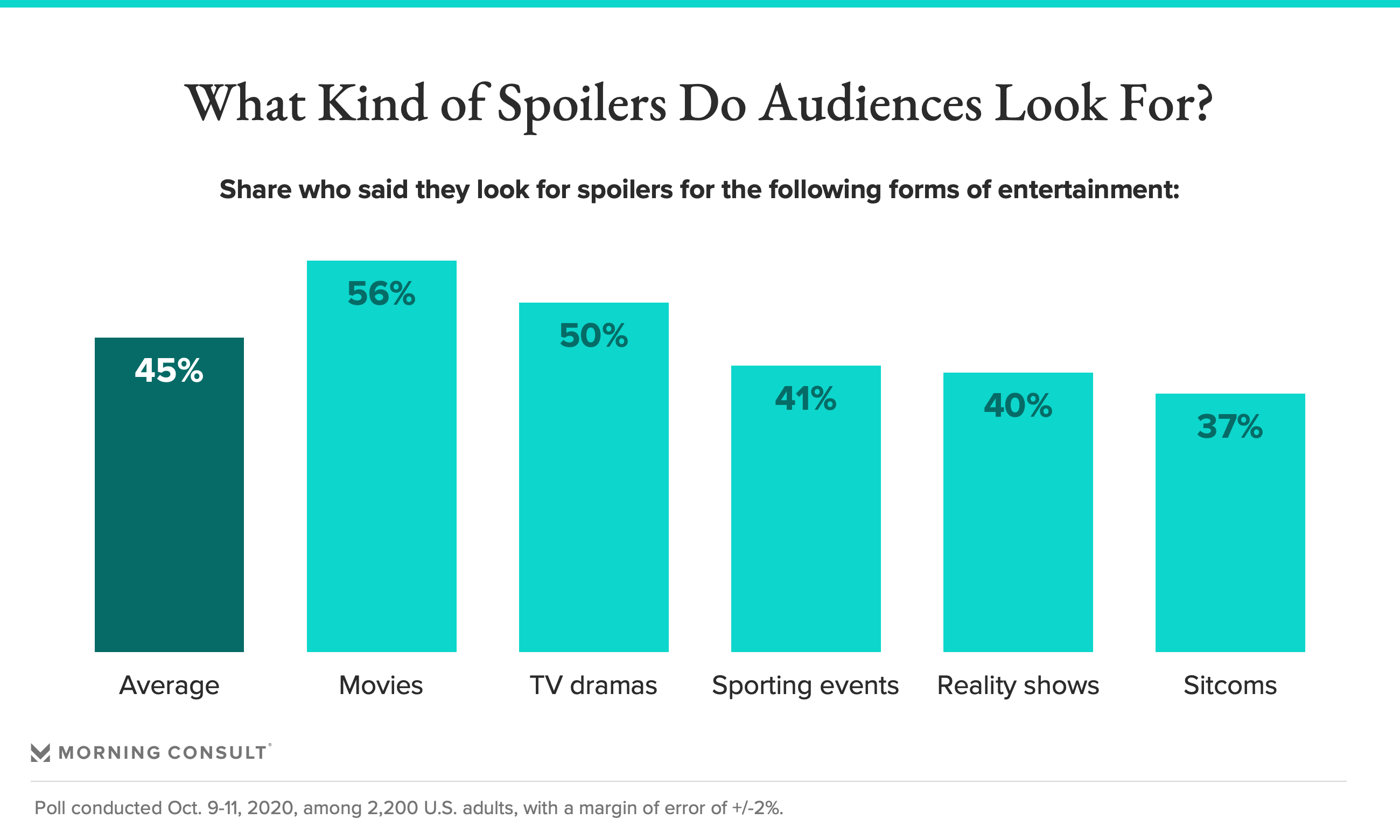 On average, roughly half (45 percent) of the country said they look for spoilers for either movies, TV shows or sporting events, according to an Oct. 9-11 Morning Consult survey. Seeking out film spoilers was most popular (56 percent), while 40 percent of adults said they check out spoilers for reality TV shows.

The figures aren’t spoilers for Benjamin Johnson, an assistant professor of advertising at the University of Florida, who pointed to an August 2011 paper in Psychological Science that found spoilers have very little impact on a viewer’s enjoyment of content, and that learning spoilers can help audiences better understand what they watch.

While spoilers can provide a sense of control over what people are watching — either to avoid content they may find upsetting or simply to make sure it appeals to them before they spend hours consuming it — Johnson’s research has shown that viewers sometimes have “reactance” to spoilers, he said.

“People feel like their choices are taken away,” Johnson said. “If you give me a spoiler, you can’t undo that damage. Things are out of Pandora’s box.” 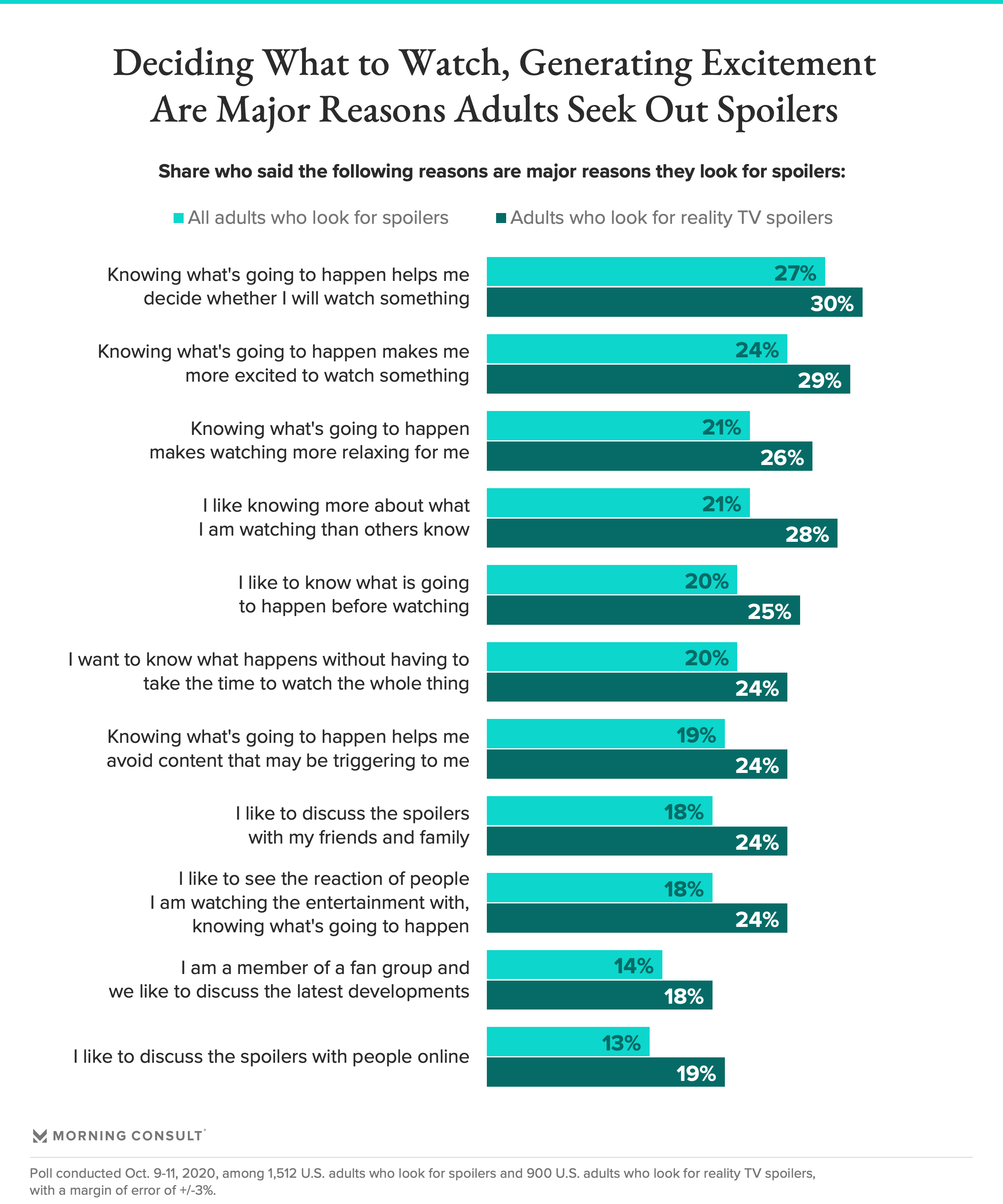 Twenty-seven percent of adults who have looked for spoilers said a major reason for their doing so is that knowing what’s going to happen helps them decide whether they will watch something, while 24 percent said knowing makes them more excited to watch.

Those in the entertainment industry are not immune to this spoiler-phobia. High-profile directors including Christopher Nolan, Quentin Tarantino and Joe and Anthony Russo have voiced their desire to censor spoilers and preserve the viewer experience. But spoilers have become an integral part of one segment of the industry: reality TV.

The genre is unique in that contestants who’ve had their lives changed during production return to normal life for a period before the show airs, providing viewers and online sleuths with ample opportunity to sniff out the end result before the show premieres.

While there’s no official start to spoiler culture as we know it today, a rough line could be drawn in the sand for the day Reality Steve posted his first spoiler.

Steve Carbone, known as Reality Steve, started blogging for fun when reality TV programs hit the airwaves in the early 2000s. He opined on new dating shows such as “The Bachelor” as it slowly gained a following.

But his focus shifted in 2009, when Carbone was given his first spoiler: The Bachelor, Jason Mesnick was going to break up with his chosen partner, Melissa Rycroft, and ask out runner-up Molly Malaney.

Related: Will You Accept These Followers?

This had never happened in the show’s history, and in a pre-social media age, there were no sneaky Instagram stories or tweets to offer fans clues. So, Carbone posted it to his blog. There was little reason for viewers to find the story accurate, he said in an interview.

But after the finale aired, and Carbone was proved right, things changed: He now runs the go-to site for Bachelor Nation spoilers, simply known as Reality Steve, with a podcast and devoted followings of his social media accounts.

According to Carbone, his site receives between 1 million and 1.5 million unique page views per month when the show is in season.

“I’m not telling people, ‘Don’t watch the show,’ because taking away their audience doesn’t help my business,” Carbone said of his “Bachelor for Dummies” approach, which allows even novice viewers to follow along. “If anything, I’m helping the show by giving them free advertising because their show is being talked about when it’s not on the air.”

Going into this season of “The Bachelorette,” the show’s big twist was already public knowledge: Leading lady Clare Crawley sailed into the sunset with fiancé Dale Moss after 12 days, leaving the rest of her suitors in the confines of the La Quinta Resort & Club to wait for her replacement, Tayshia Adams, to mend their broken hearts. But viewers are still tuning in.

The premiere episode was watched by 5.03 million viewers, up from the previous season’s premiere which 4.77 million watched in 2019, according to The Hollywood Reporter.

The show, whose season concludes on Tuesday, “definitely leaned into the spoilers a lot more because they kind of have to,” Carbone said. “It’s part of the culture now.”

Nowadays, just filming the show spoils itself in some cases, he added. One-on-one dates are filmed in public, and viewers can be tipped off to the final four contestants when the show trades its international travels for intimate dates in hometowns.

“It engages the fans,” Carbone said, “and then those people in that town are probably going to want to watch that episode which helps them.”

Blogs like Reality Steve can help networks in some cases, but it’s a balance, according to Bauer.

“Any misinformation in the blog can potentially harm the show and even the network,” Bauer said, “so it’s in the best interest of networks to cultivate mutually beneficial relationships with credible bloggers by proactively providing them with accurate, timely content regarding the show.”

Social media, while capable of driving engagement and helping to build a show’s loyal fan base, has become notorious for spoiling key moments in entertainment for viewers. Fifty-nine percent of respondents said they have avoided social media to prevent seeing spoilers. 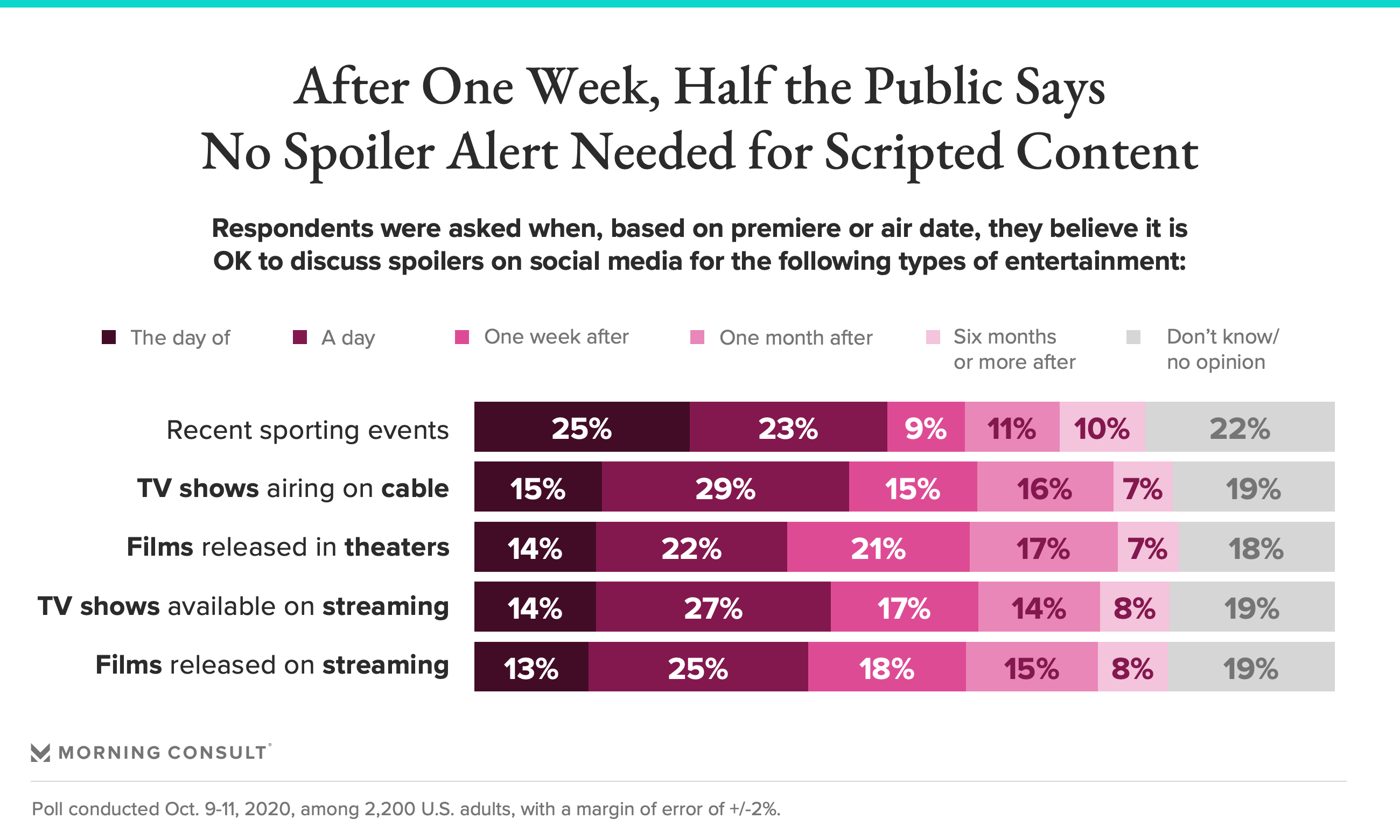 According to the Morning Consult survey, adults are most comfortable with a one-week statute of limitations on spoilers: 29 percent said it’s OK to discuss TV show spoilers one week after a program premieres on cable TV.

With the pandemic presenting challenges for scripted programming, reality TV offered some of the first shows to premiere during the summer and fall TV seasons. And as viewers turned to these programs, they also turned to Reality Steve for answers they’ve grown accustomed to having — even as sequestered filming locations have made it more challenging to obtain spoilers in a timely fashion.

“I’m hearing things. I still am spoiling. It’s just not as detailed and not as extensive,” Carbone said, noting that instead of sharing episode-by-episode spoilers before the start of the season, he’s been sharing them the morning of episode premieres.

But for Reality Steve, reality TV spoilers are the only ones that pique his interest.