Roughly half say Trump deserves to be impeached for his call with Georgia’s secretary of state, though a similar share say Congress shouldn’t begin proceedings

Sen. Kelly Loeffler (R-Ga.) speaks at a Jan. 4 campaign rally in Dalton, Ga., as President Donald Trump looks on. During the rally, Loeffler announced that she would be joining some of her colleagues on Capitol Hill in objecting to states' tallies of Electoral College votes on Wednesday, which new polling shows is opposed by 62 percent of the electorate. (Alex Wong/Getty Images)
By Eli Yokley

Ahead of Wednesday’s joint session of Congress to certify the Electoral College vote in the 2020 presidential election, most voters are aligning with a sentiment then-Vice President Joe Biden expressed four years ago when lawmakers signed off on President Donald Trump’s 2016 victory: It’s over.

According to a new Morning Consult survey, 62 percent of voters say Congress should accept Biden’s Electoral College victory over Trump, while 24 percent of voters align with the roughly two-thirds of House Republicans and a quarter of GOP senators who are planning to object to the certification of some states’ vote tallies. 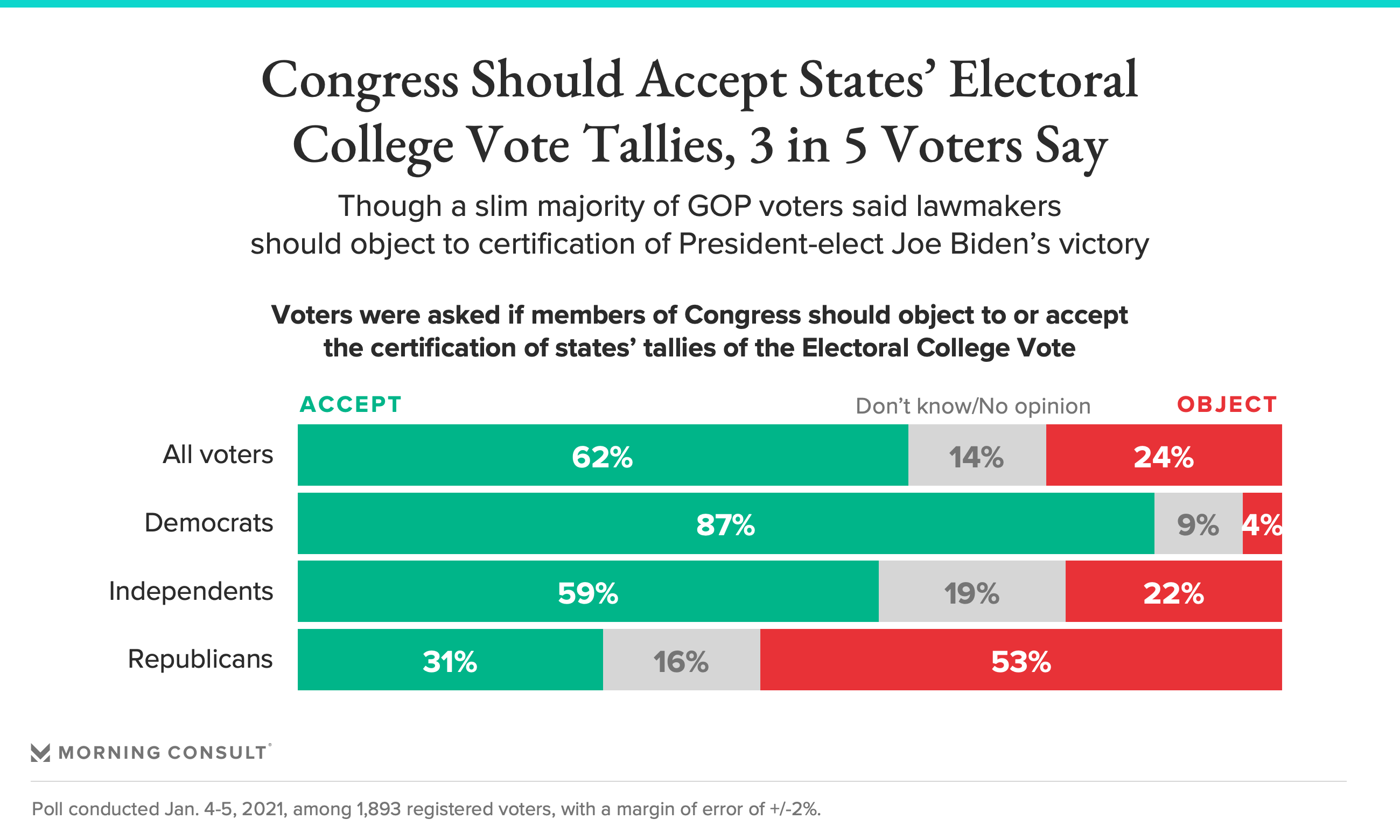 Most independents and nearly all Democrats agree that Congress should accept the states’ tallies. But Republican lawmakers taking the fruitless path to try and overturn the will of the electorate will do so backed by 53 percent of their party’s voters nationwide, compared to less than a third who oppose the attempt.

The Jan. 4-5 poll, which surveyed 1,893 registered voters and has a margin of error of 2 percentage points, was conducted in advance of the final step to certify Biden’s win. The Electoral College last month certified Biden’s 306-232 feat over Trump, driven by narrow victories in places like Wisconsin, Arizona and Georgia.

The Peach State, with its 16 electoral votes and two runoffs to decide control of the Senate majority, became a focal point for the outgoing president’s legal challenges and political pressure on Republican officials to try to overturn his loss. On Sunday, The Washington Post published a recording of Trump pressuring Georgia Secretary of State Brad Raffensperger “to find 11,780 votes” to overturn Biden’s victory in the state amid unproven claims about voter fraud and ballot tampering.

Democrats were twice as likely as Republicans (52 percent to 26 percent) to say they’d seen, read or heard “a lot” about the event, while 39 percent of voters overall said the same. Still, sentiment about the call aligned closely with partisan views about the effort from some lawmakers to overturn the Electoral College results. 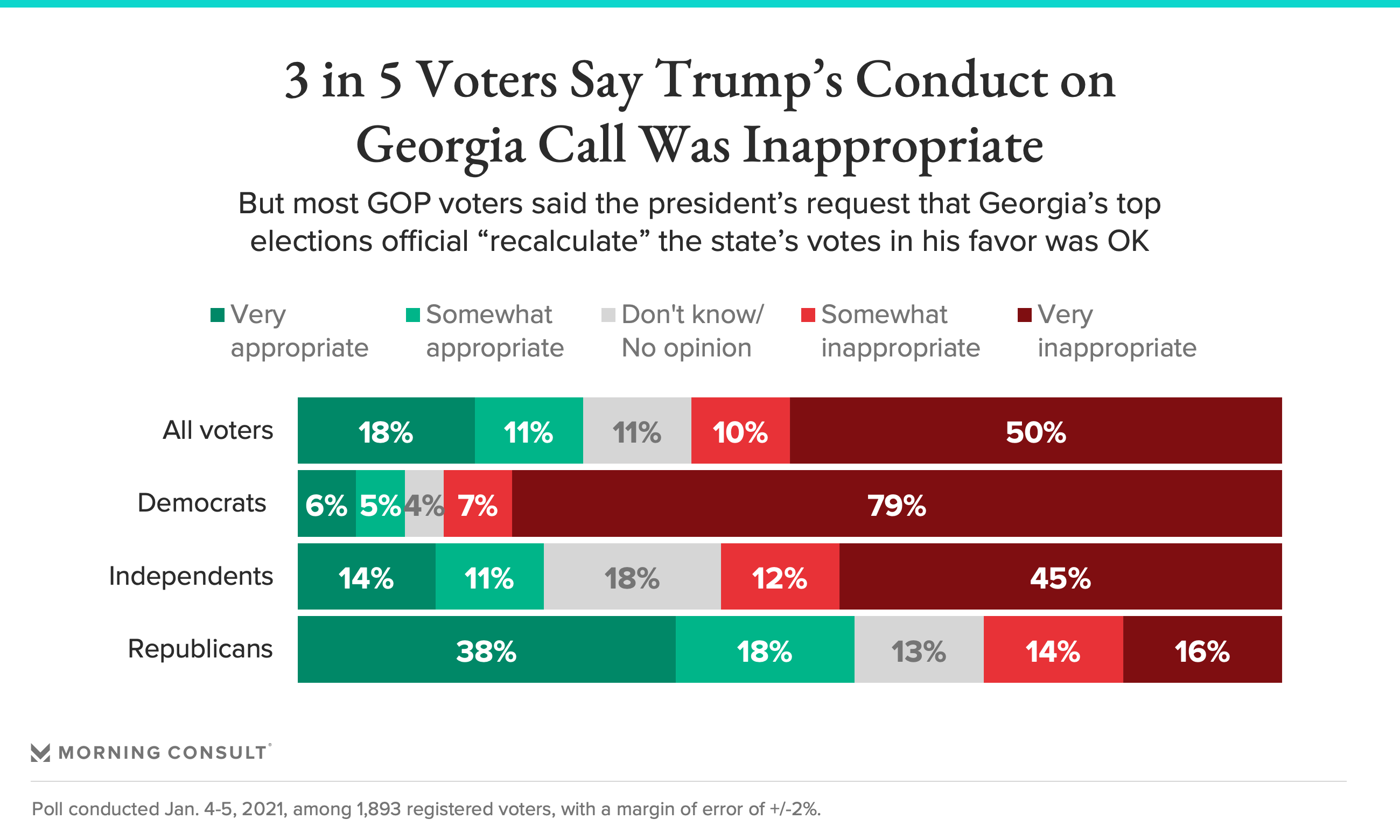 Six in 10 voters, including 30 percent of Republicans, said the call was inappropriate, while 29 percent of the overall electorate and 56 percent of GOP voters said it was appropriate.

On Capitol Hill, the Raffensperger episode prompted public expressions of unease from some Republicans, such as House Republican Conference Chairwoman Liz Cheney (R-Wyo.), who called the tape “deeply troubling.” On the Democratic side of the aisle, Neal Katyal, the former acting solicitor general of the United States, co-authored an op-ed in The New York Times calling for Trump’s impeachment over the phone call, and Rep. Alexandria Ocasio-Cortez (D-N.Y.) told reporters, “if it was up to me, there would be articles on the floor quite quickly.” 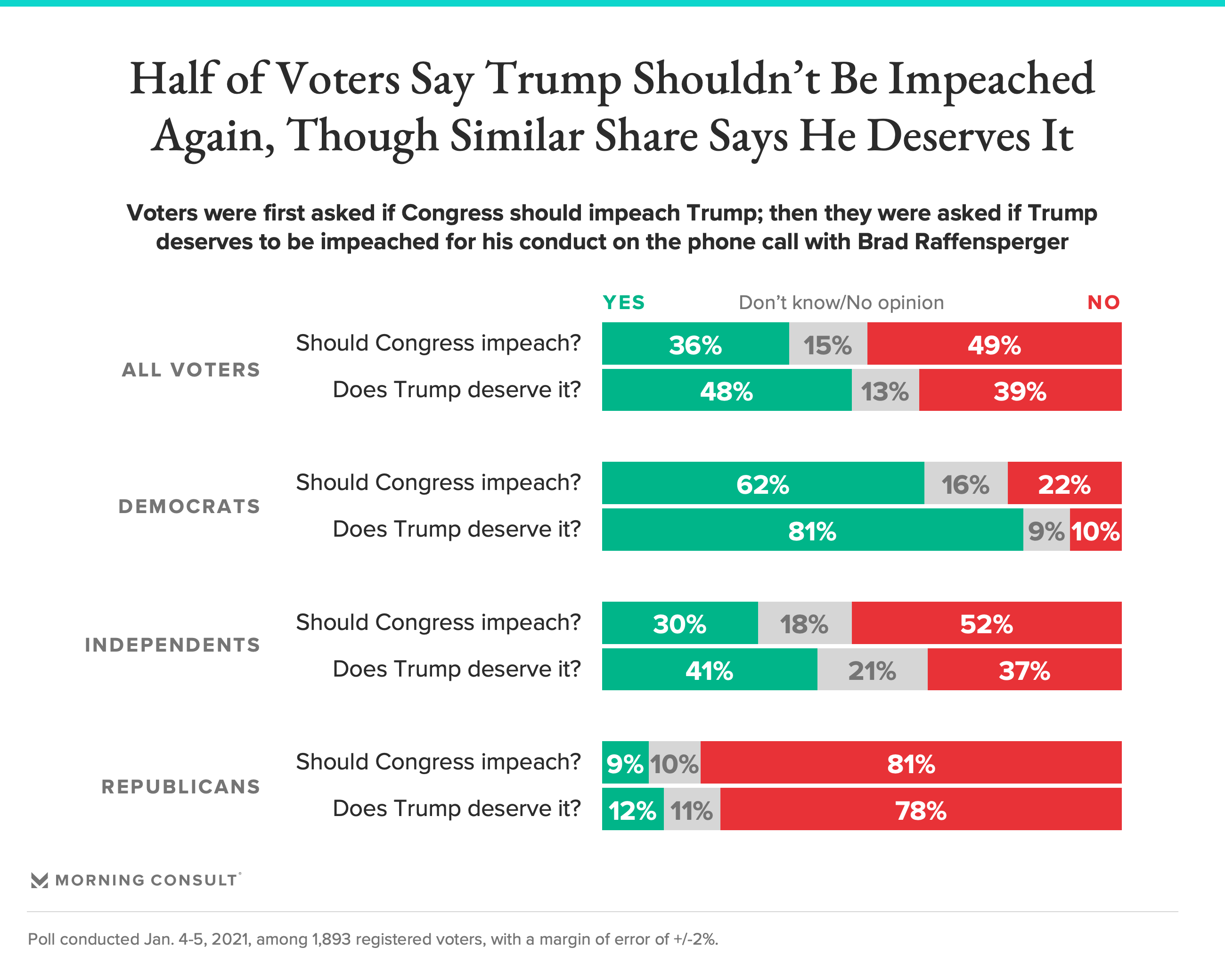 According to the survey, voter support for impeaching Trump — who is set to depart office later this month — is minimal. Thirty-six percent said Congress should begin impeachment proceedings, while 49 percent said it should not. But when asked whether Trump deserves to be impeached for his conduct on the call, the numbers flipped, with nearly half (48 percent) saying the president’s behavior merits impeachment and 39 percent saying it does not.

Even if Congress doesn’t wage a case against Trump, legal scholars have said Trump’s actions with Raffensperger could draw criminal scrutiny, and Democratic Reps. Ted Lieu of California and Kathleen Rice of New York have called on the Federal Bureau of Investigation to open a probe. It would not mark the first time Trump’s actions have garnered attention from prosecutors, and the question of whether he would pardon himself — the constitutionality of which is unclear — hangs over the waning days of his presidency.