Even Amid Price Hike, Netflix Led Streaming Use in Second Half of 2020

But HBO Max streams climbed in the fourth quarter, with “Wonder Woman 1984” premiere

Netflix remained the top SVOD service in 2020's final quarter, accounting for 22 percent of the streaming share, according to Reelgood. (Freestocks.org from Pexels)
By Sarah Shevenock

With the streaming industry rolling out new services and original programming, millions of viewers had more options to choose from as they stayed at home throughout most of 2020. New data shows that some newcomers chipped away at streaming stalwarts’ status, although giants Netflix Inc. and Prime Video remain on top. 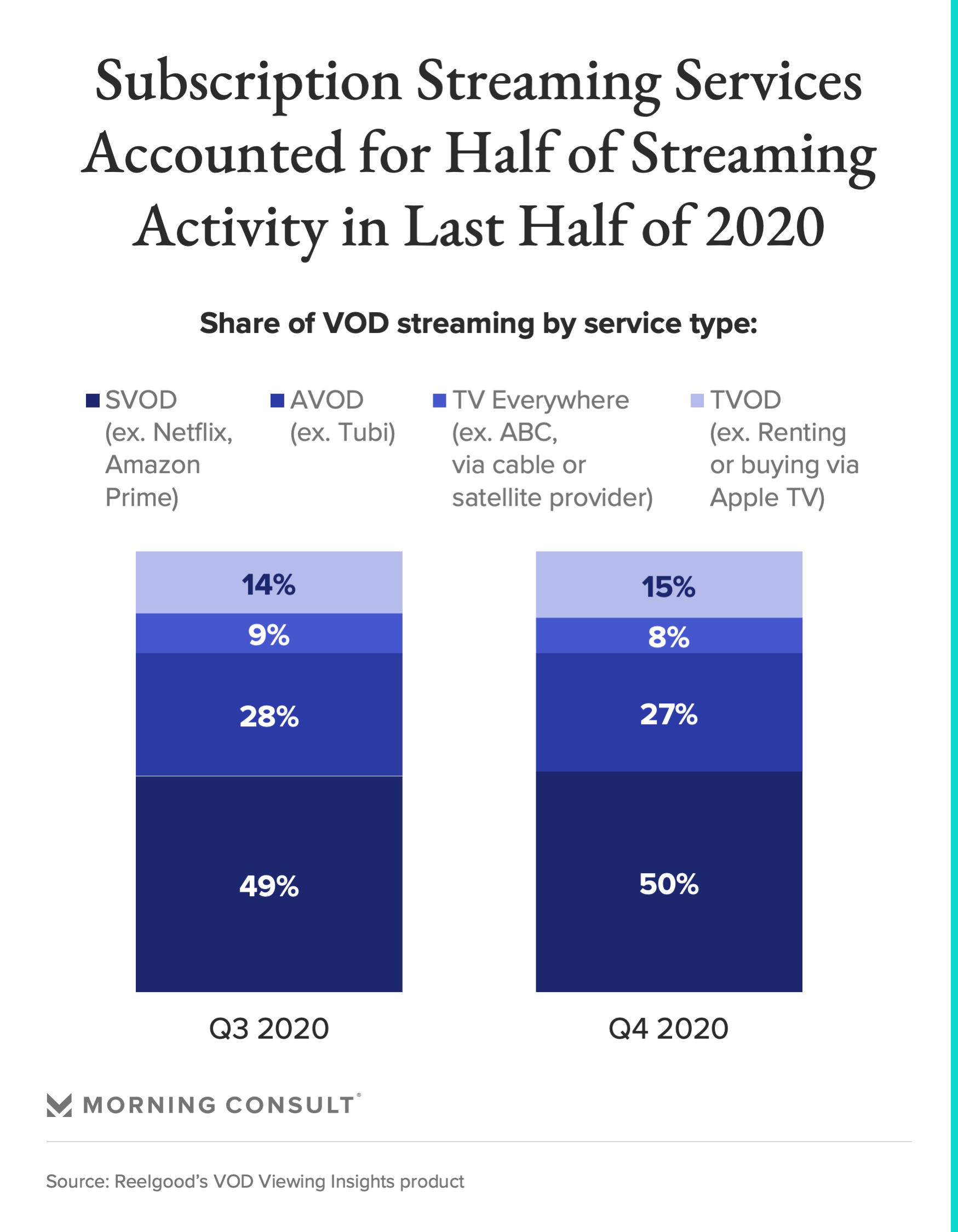 A new whitepaper from Reelgood, an online service highlighting films and television shows available for streaming in the United States and the United Kingdom, shared exclusively with Morning Consult, offers insight into what streaming subscribers watched in the last half of 2020.

Subscription video on-demand services accounted for the most streaming activity in 2020’s latter half, with about half of Reelgood’s 2 million U.S. users streaming via services such as Netflix Inc., Hulu or HBO Max. Twenty-eight percent and 27 percent of users used free, ad-supported streaming services such as Tubi during the third and fourth quarters, respectively.

Among subscription platforms, Netflix was still the top platform, accounting for a quarter of the SVOD streaming share in the third quarter and 22 percent of the total share in the fourth quarter, followed closely by Amazon.com Inc.’s Prime Video service.

Netflix claimed the No. 1 spot despite raising prices in late October to $13.99 per month for a standard subscription (up $1) and $17.99 per month for its premium plan (up $2), while its entry-level tier remained at $8.99. In its third quarter letter to shareholders, Netflix reported to have more than 195 million subscribers worldwide.

HBO Max saw its streaming share climb 3 points to 12 percent in the fourth quarter, which Reelgood attributed to the Christmas premiere of “Wonder Woman 1984,” as well as a catalog of popular TV shows and holiday films. The service had 12.6 million activated subscribers as of early December, according to remarks made by AT&T Inc. Chief Executive John Stankey at the UBS Global TMT Virtual Conference. 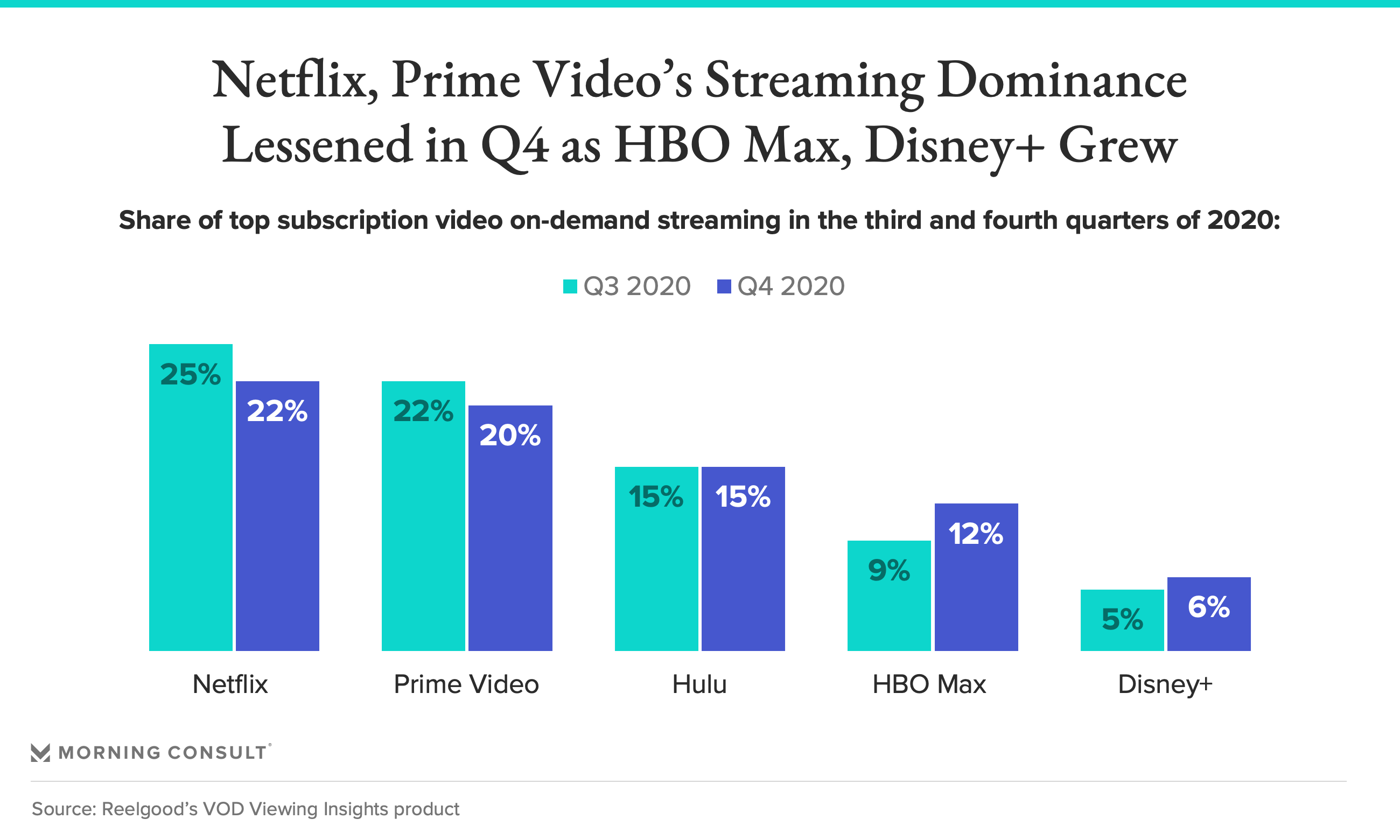 “Wonder Woman 1984” also had the best opening weekend of any film debuting on a subscription video on-demand service in the fourth quarter, per Reelgood, earning a 4 percent share of streams and engagements when it premiered the weekend of Dec. 25. This followed the announcement that Warner Bros. would simultaneously release its slate of 2021 films on both HBO Max and in theaters, a decision that sparked numerous distribution debates in Hollywood circles.

Related: The Majority of Streaming TV Shows Are Scripted, Which Is Exactly What Viewers Want

Walt Disney Co.’s “Soul,” which was released the same weekend as “Wonder Woman 1984,” came in second, and Prime Video’s “Borat Subsequent Moviefilm” was No. 3.

Four Netflix original films — “Hubie Halloween,” “Mank,” “The Trial of the Chicago 7” and “Hillbilly Elegy” — were in the top 10.