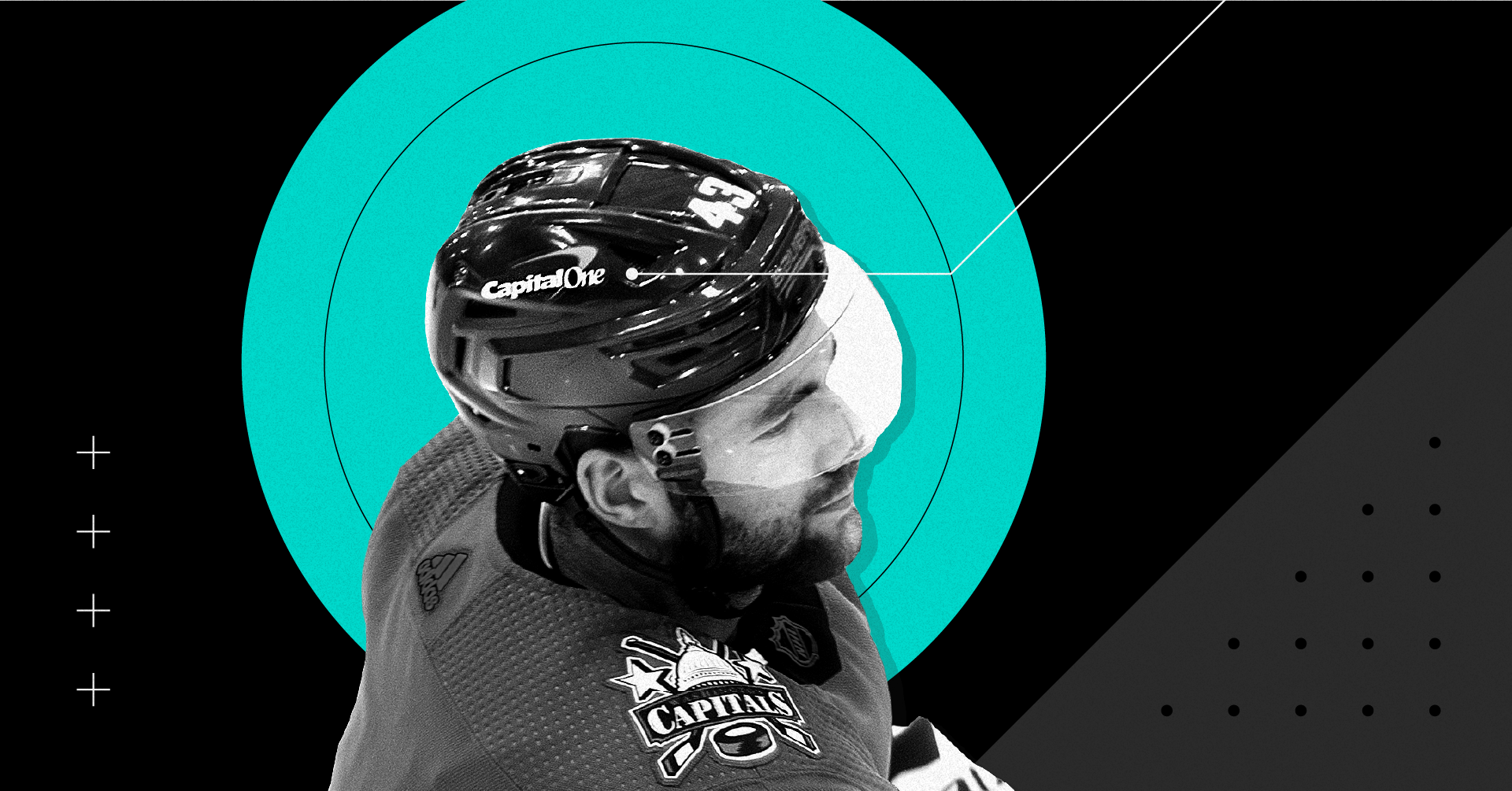 More than half of sports fans ages 35-44 expressed support for uniform sponsorship, according to a Morning Consult poll. (Image courtesy of the Washington Capitals / Morning Consult artwork by Kelly Rice and Samantha Elbouez)
By Alex Silverman

When the NBA introduced sponsored jersey patches in 2017, uniform advertising became a “when, not if” proposition for the rest of North America’s most prominent leagues. And with the COVID-19 pandemic wreaking financial havoc on the sports industry, that “when” is now for two of the country’s major team sports.

Fortunately for the NHL, which is allowing teams to feature brand logos on players’ helmets for the first time when the season kicks off Wednesday, and MLB, which industry insiders say isn’t far behind, polling indicates the majority of fans don’t take issue with uniform sponsorships in professional sports. In fact, younger, more affluent fans tend to support corporate branding in sports, including on jerseys and helmets. 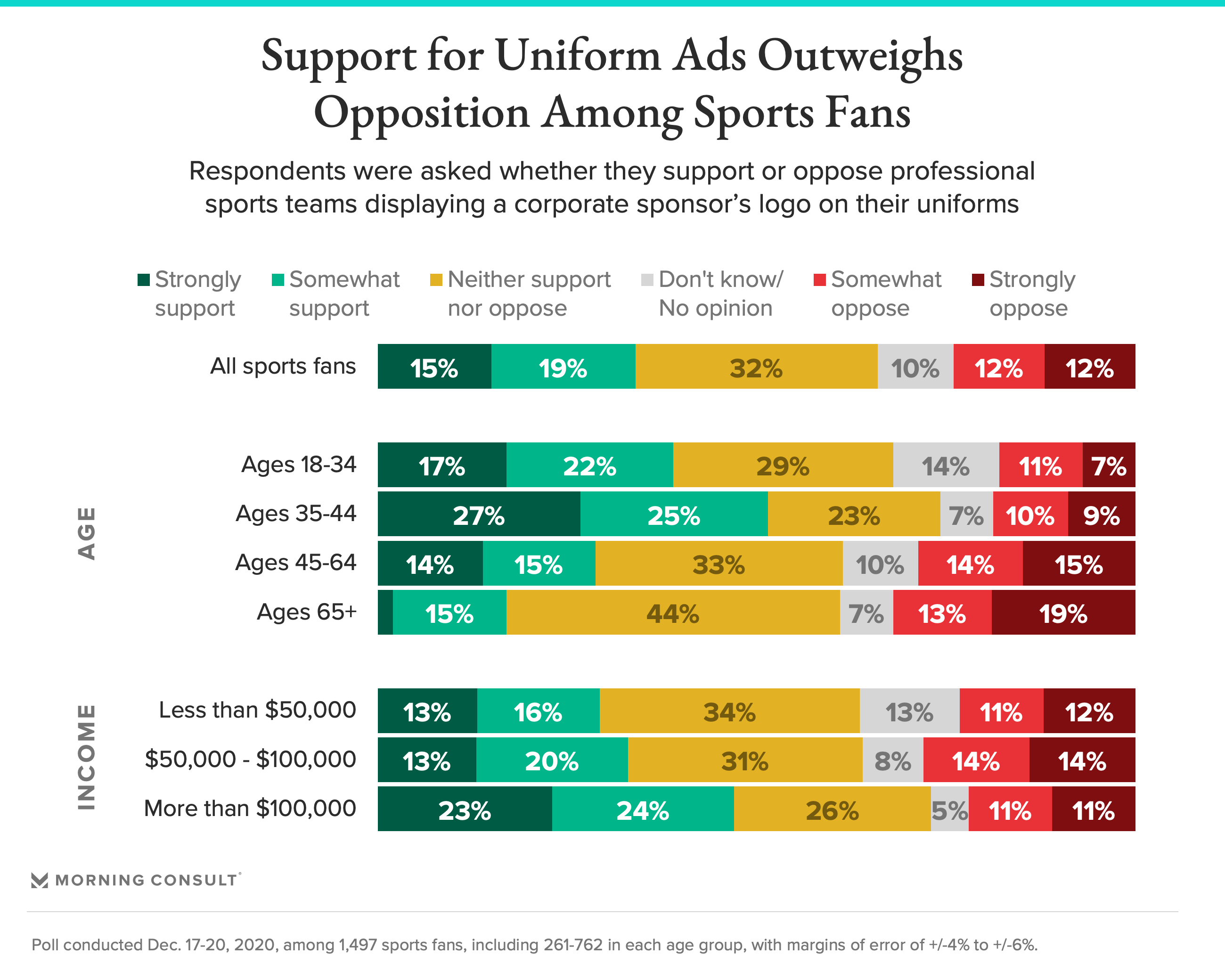 “What we once felt like might really anger the fans doesn’t really affect them,” said Jessi Sanchez, who leads consulting and valuation practice at sports sponsorship agency Premier Partnerships. “They don’t really care as much.”

That acceptance has translated to big money for the NBA, with teams reportedly receiving an average of $7 million to $10 million per season from their jersey patch sponsors, with the Golden State Warriors leading the way at $20 million thanks to a deal with Japanese e-commerce brand Rakuten Inc.

The NHL did not respond to a request for comment on how the league and teams are valuing the new sponsorship inventory, but the league reportedly hoped to raise a total of $15 million this season, with high-profile teams like the Toronto Maple Leafs and Montreal Canadiens getting around $1 million each.

While brands value the opportunity to be part of the action, the NHL’s helmet decals are unlikely to provide the same level of visibility as jersey patches, and the speed of hockey relative to other sports could also limit exposure.

“My initial sense is that the perceived value of the asset would be higher than any quantitative valuation that would be done, just based on the fact that hockey is a very fast-moving sport,” said Jason Miller, senior vice president and head of properties at Excel Sports Management, who has facilitated several NBA jersey patch deals. “Based on the size of the position and the way they tape hockey, I think it creates challenges in terms of how often the actual position would be shown.”

Michael Neuman, executive vice president and managing partner at Scout Sports & Entertainment said the league and teams will likely work with national and local broadcast partners to try and maximize the decals’ visibility during telecasts.

The value of uniform ads also goes beyond visibility during live games. Miller said the NBA initially undervalued its jersey inventory by failing to take into account the amplification of the patches on social media by star players. 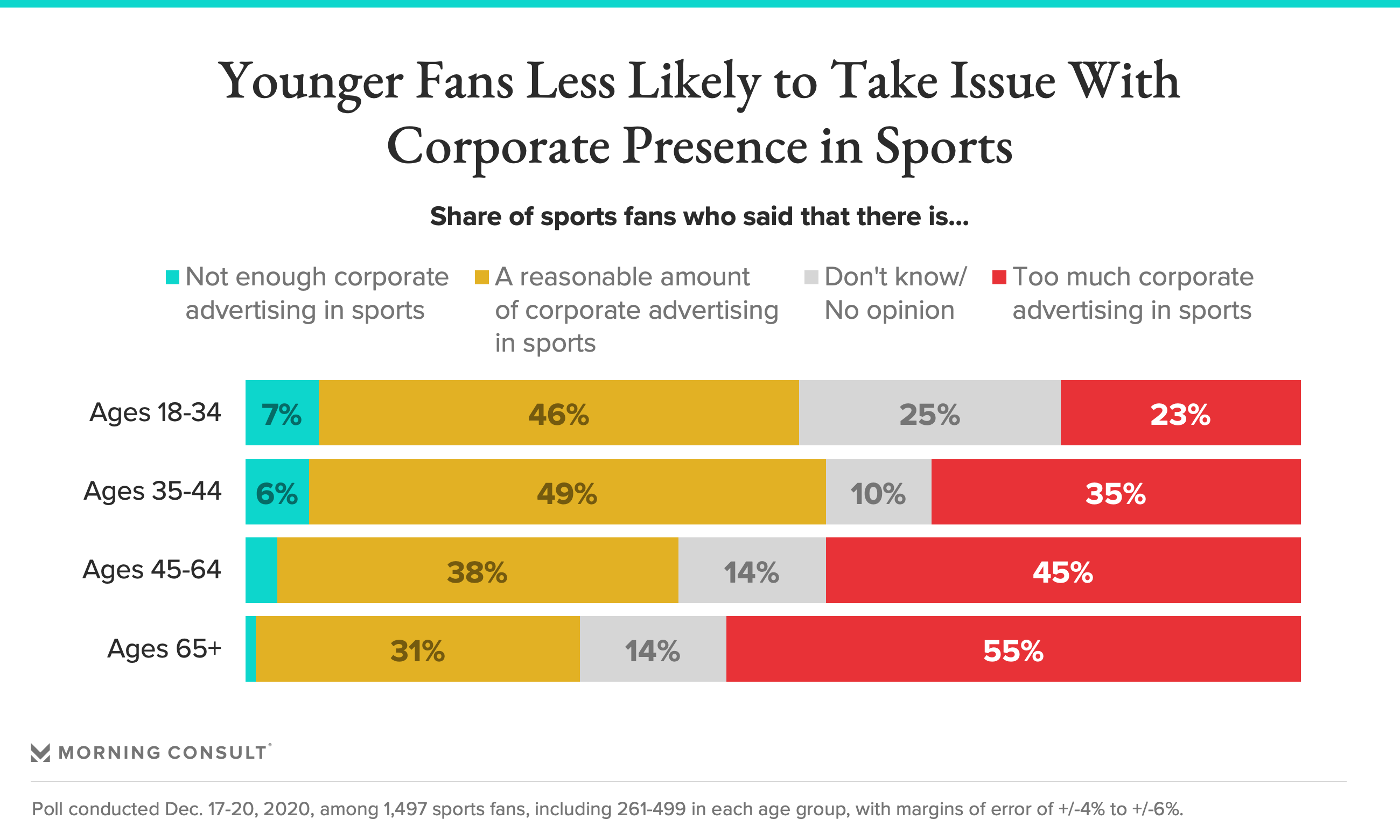 Nineteen percent of younger sports fans, ages 18-44, opposed sports teams outfitting uniforms with corporate logos. More than half of fans ages 35-44 expressed support for uniform sponsorship, while those aged 18-34 were less enthusiastic at 39 percent. Among fans ages 65 and older, 1 in 3 respondents opposed uniform ads, while only 17 percent expressed support.

The share of fans who said there is too much corporate advertising in sports overall was also greater among older respondents. Twenty-three percent of sports fans ages 18-34 said sports have become too commercial, compared to 55 percent of fans over the age of 65.

Nearly half of fans with an annual income of at least $100,000 responded positively to uniform branding, more than twice the share of high earners who expressed a negative sentiment. Eighty percent of respondents with six-figure salaries identified as sports fans, compared to 66 percent of those earning less, and were more likely to consider themselves avid fans. While fans making less than $100,000 a year were also more likely to support than oppose uniform sponsorship, the margin was much smaller and the share of fans indifferent toward the logo placement was higher.

Sports fans who identified as Democrats were nearly twice as likely to support uniform advertising than to oppose it, by a margin of 42 percent to 22 percent. Their Republican counterparts, on the other hand, were more evenly split, with 31 percent in support and 28 percent in opposition. The NHL and the MLB both have fan bases that are slightly more Democratic than Republican, although political identification varies by individual team, while the NBA fan base skews more heavily to the left. 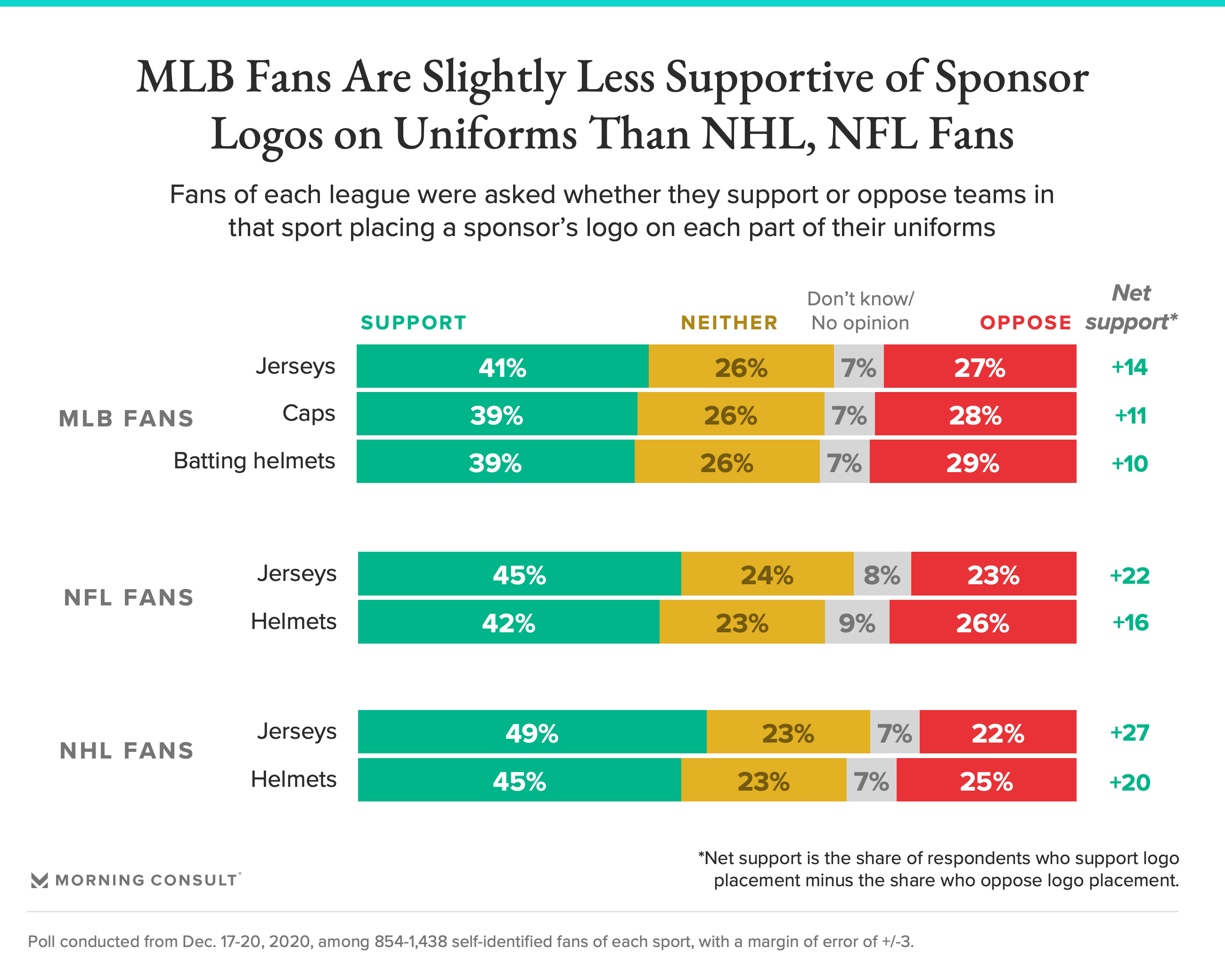 The NHL, which also sold first-time naming rights to its four divisions for the upcoming season, has been more cautious than the NBA in its uniform sponsorship foray by offering decals on players’ helmets rather than patches on jerseys.

Commissioner Gary Bettman expressed reluctance for years about selling ads on jerseys due to the “iconic” nature of what hockey traditionalists refer to as sweaters. In addition, the NHL’s first round of helmet deals are reportedly only for the 56-game 2020-21 season, while the NBA rolled out its jersey patch initiative with a three-year trial period before making the ads permanent in 2019.

About half of the NHL’s 31 teams have announced helmet sponsors ahead of the season or have been spotted wearing decals during practice. Given the lack of precedent for uniform advertising in the NHL and helmet advertising in any major U.S. sport, experts said there’s a lot of guesswork involved for teams and potential sponsors in determining what the decals are worth. Sources said the NBA conducted lengthy preliminary analysis prior to taking its jersey patches to market, and that MLB is currently doing similar due diligence on both jersey sleeve patches and helmet decals. 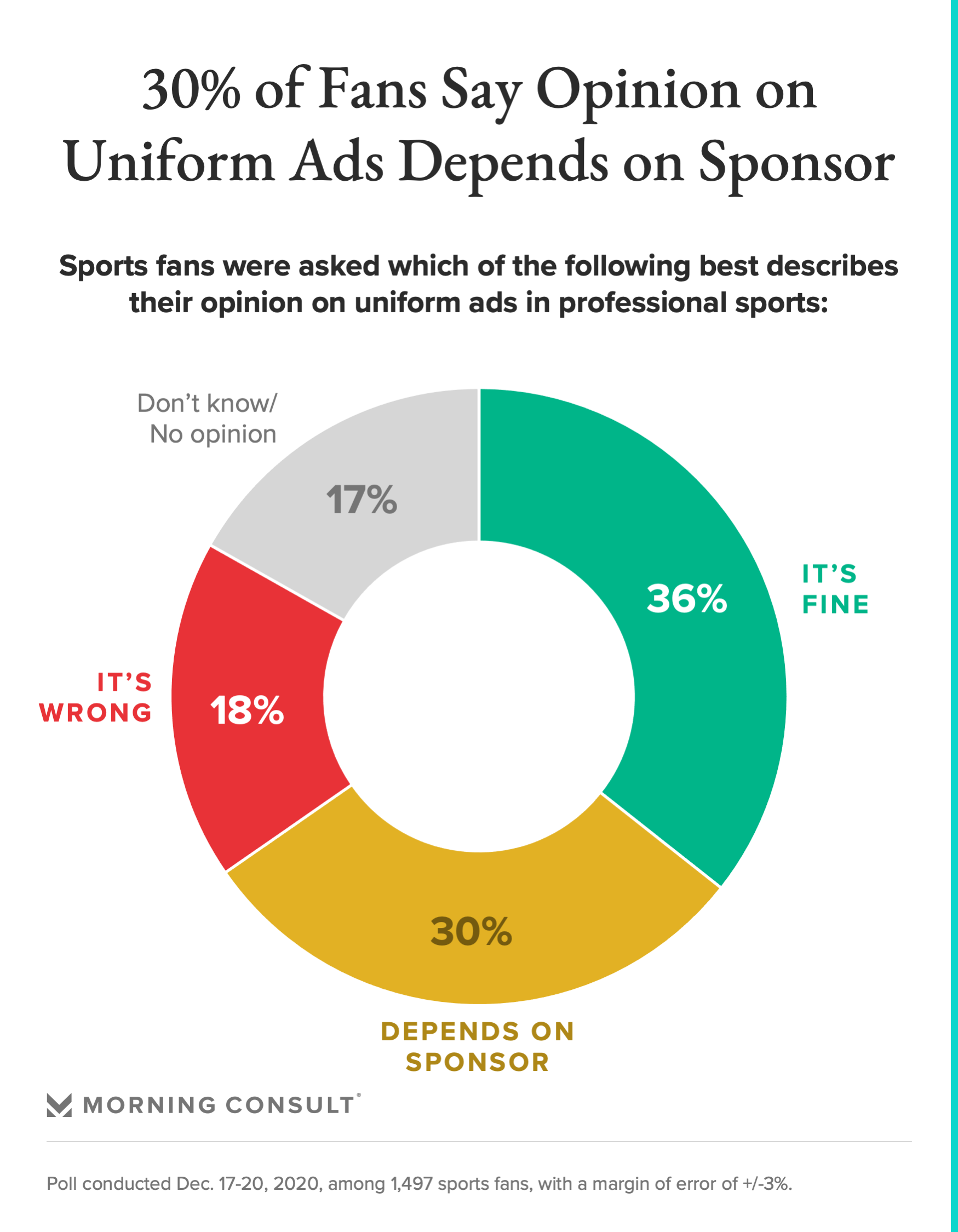 One part of this process, called “white space analysis,” uses artificial intelligence to determine how often the unoccupied part of a uniform where a logo would be placed appears during individual broadcasts and extrapolates that over the course of a season’s worth of nationally and locally televised games.

It is unclear whether the NHL, whose helmet sponsorship initiative emerged more suddenly amid the pandemic, has conducted similar research.

Many NHL teams are reportedly using the new inventory as a “make-good” to existing sponsors who haven’t received the exposure they are entitled to in their agreements due to the pandemic. The New Jersey Devils, Washington Capitals and Nashville Predators, for example, are among the handful of teams that will have athletes wear the logo of their arena naming-rights sponsors — Prudential Financial Inc., Capital One Financial Corp. and Bridgestone Corp., respectively. These companies, Sanchez said, have “lost probably the biggest chunk of value from their deal by not having fans.”

Regardless of how much revenue the helmet sponsorships generate this season, teams will likely be able to conduct a more thorough sales process following the season if the league and players’ union decide to continue the program beyond the trial period.

“They’re getting some reaction from the fan base, they’re able to measure impact from a quantitative and qualitative perspective,” Miller said. “That’s going to better inform a future sales process when they go out and do a longer-term, more impactful deal, as opposed to what it now seems is a make-good.”