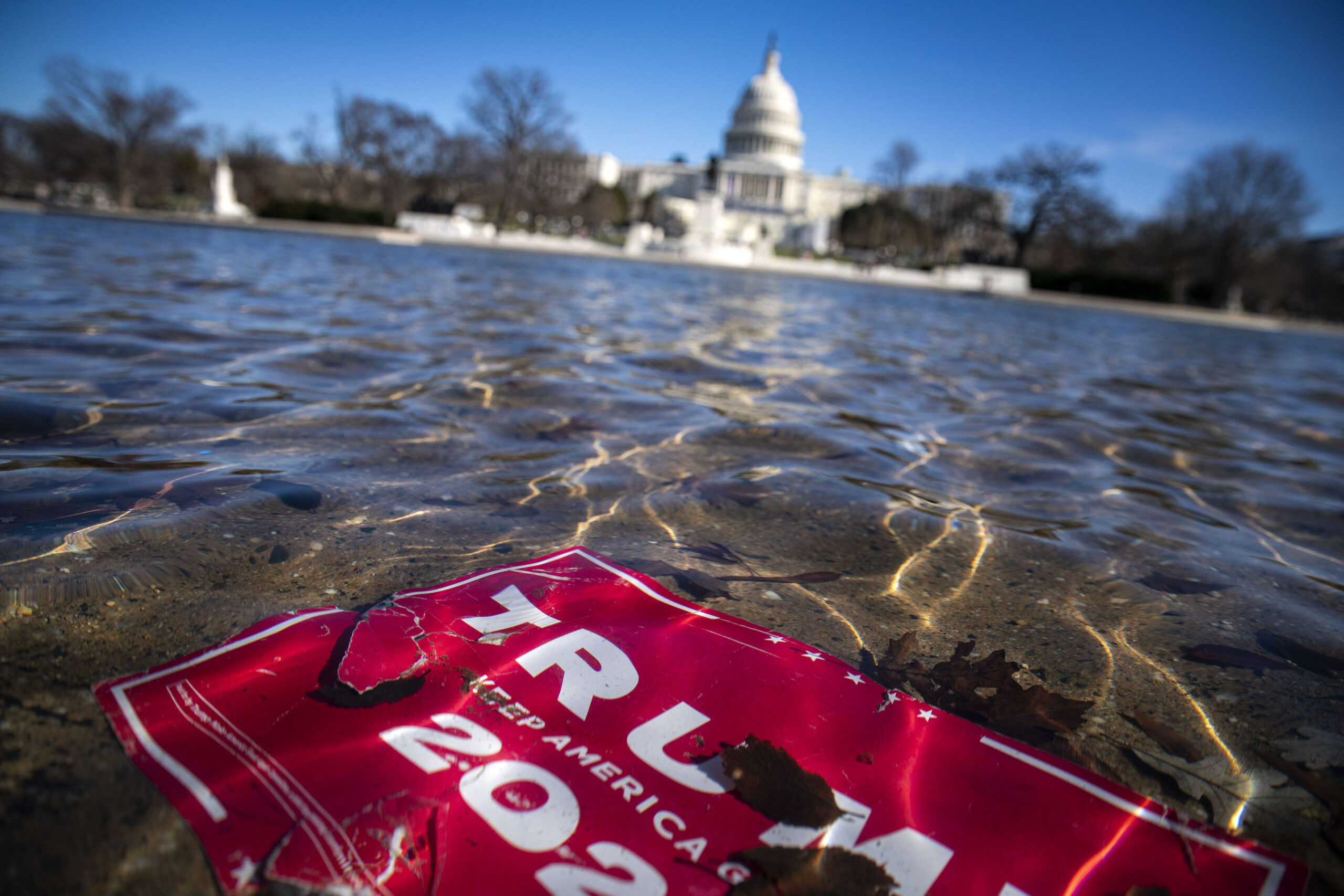 A campaign sign for President Donald Trump lies beneath water on Jan. 9 in the Capitol reflecting pool. New polling shows Trump's approval rating reaching a new low, and 55 percent of voters say he should resign before his term ends on Jan. 20. (Al Drago/Getty Images)
By Eli Yokley

Few events during Donald Trump’s presidency have drastically moved public perceptions about his job performance. But last week’s riots on Capitol Hill — incited by Trump’s attacks on the democratic process — have led to significant decline in sentiment about the outgoing leader as more voters join calls from lawmakers for his impeachment.

According to Morning Consult Political Intelligence tracking conducted Jan. 8-10, 37 percent of voters approve of Trump’s job performance, down 5 percentage points since polling conducted Jan. 3-5 before the Jan. 6 acts of insurrection prompted by Congress’ meeting to count the Electoral College votes and seal the deal on President-elect Joe Biden’s victory. The share who disapproved of Trump increased 5 points, to 60 percent, over the same time period. 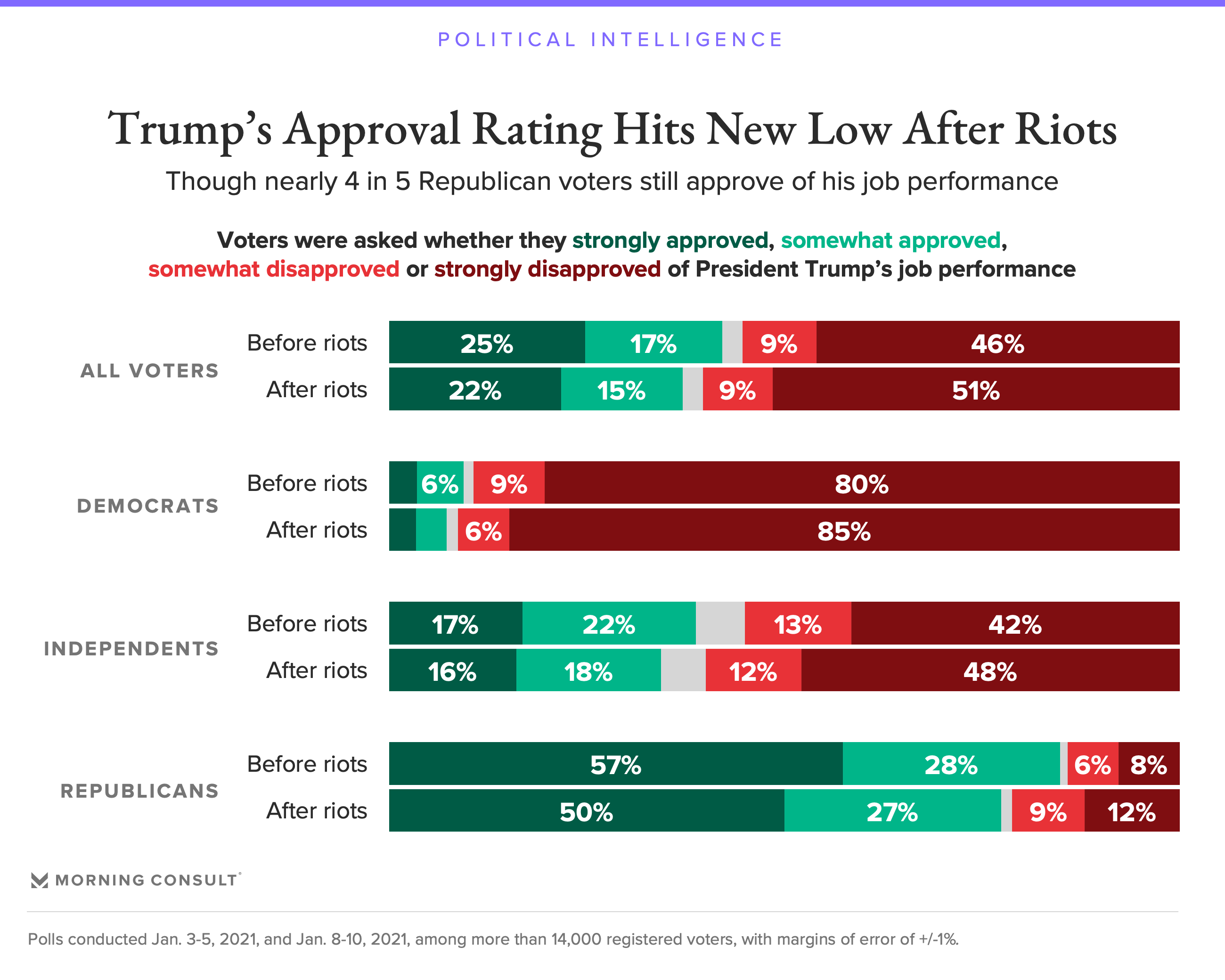 While perceptions about the president worsened among independents, the decline was largely driven by a 15-point drop in Trump’s net approval rating — the share who approve minus the share who disapprove — among Republican voters, whose support for the president has been mostly unflinching over the course of his four years in office.

Twenty-one percent of Republican voters said they disapprove of Trump’s job performance, up 7 points, while 77 percent approve of how he’s handling the job, including 50 percent who do so strongly. These numbers are some of Trump’s worst among GOP voters since taking office, surpassed only by polling conducted in August 2017 amid the uproar over his response to the fatal clashes in Charlottesville, Va., and in the aftermath of Republicans’ failure to repeal and replace the Affordable Care Act.

Related: Trump’s Popularity Declines Among GOP Voters After Brutal Week for the Country

The findings come amid almost complete radio silence from the president since remarks last week accepting his Electoral College loss to President-elect Joe Biden, enabling a void that might have been filled by missives from his now-banned Twitter account to be occupied by Trump’s critics as calls have grown for his removal from office.

In a Morning Consult/Politico poll conducted Jan. 8-11, 53 percent of voters said they would approve if Congress voted to impeach Trump and 54 percent said they would back his conviction and removal by the Senate. 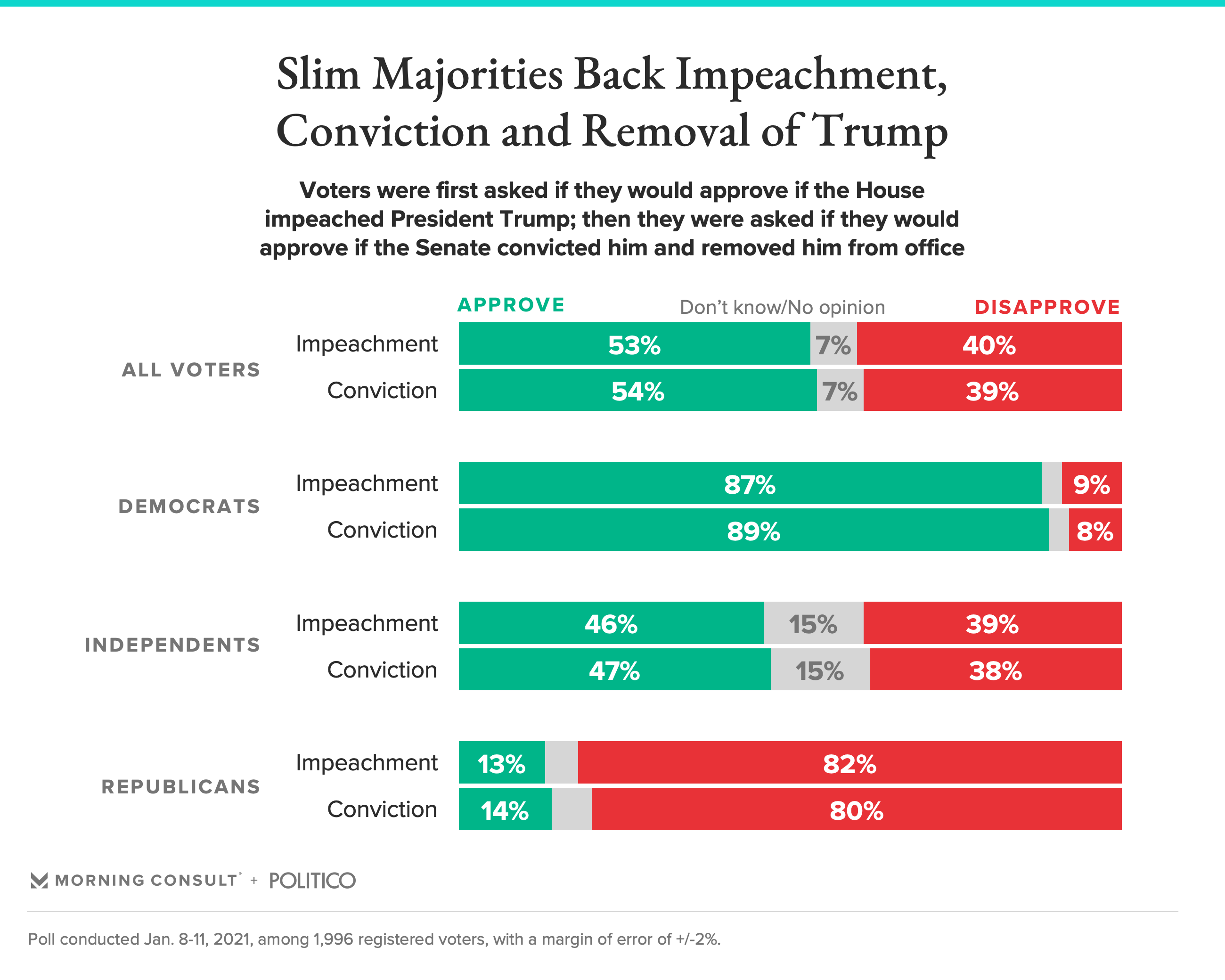 Support for the two actions fell largely along partisan lines: Roughly 9 in 10 Democrats, and pluralities of independent voters, support the moves, while more than 4 in 5 Republicans oppose Trump’s impeachment as well as his conviction by the Senate as their party leaders stake out positions on the issue.

On Capitol Hill, House Speaker Nancy Pelosi (D-Calif.) has said the House will move forward with a vote on impeachment if Vice President Mike Pence and Trump’s Cabinet do not relieve the president of his authority using provisions in the Constitution’s 25th Amendment. But Trump’s Cabinet is unlikely to turn on him, and the Senate is not expected to return to vote on his conviction and removal until the day before Biden’s Jan. 20 inauguration, leaving resignation as the only other option on the table for Trump’s ouster. 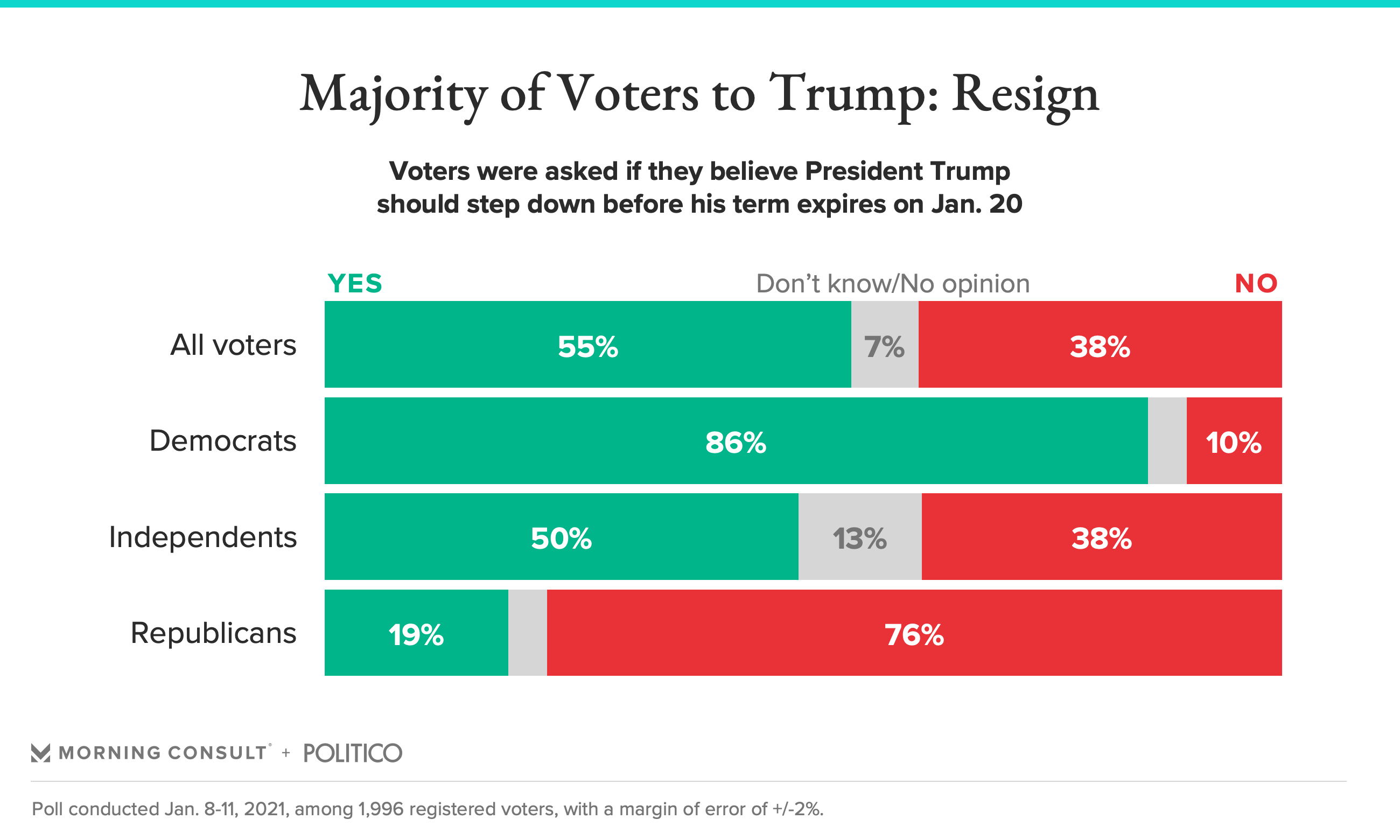 Fifty-five percent of voters said Trump should step down, including 86 percent of Democrats, 50 percent of independents and 19 percent of Republicans (larger than the share who support his impeachment and conviction). Roughly 2 in 5 voters oppose Trump’s resignation.