Discovery+ Has Star Power and Exclusive Content. But Do People Know What’s Exactly on It?

Only about 20% of U.S. adults know the service will feature lifestyle shows such as "Fixer Upper" 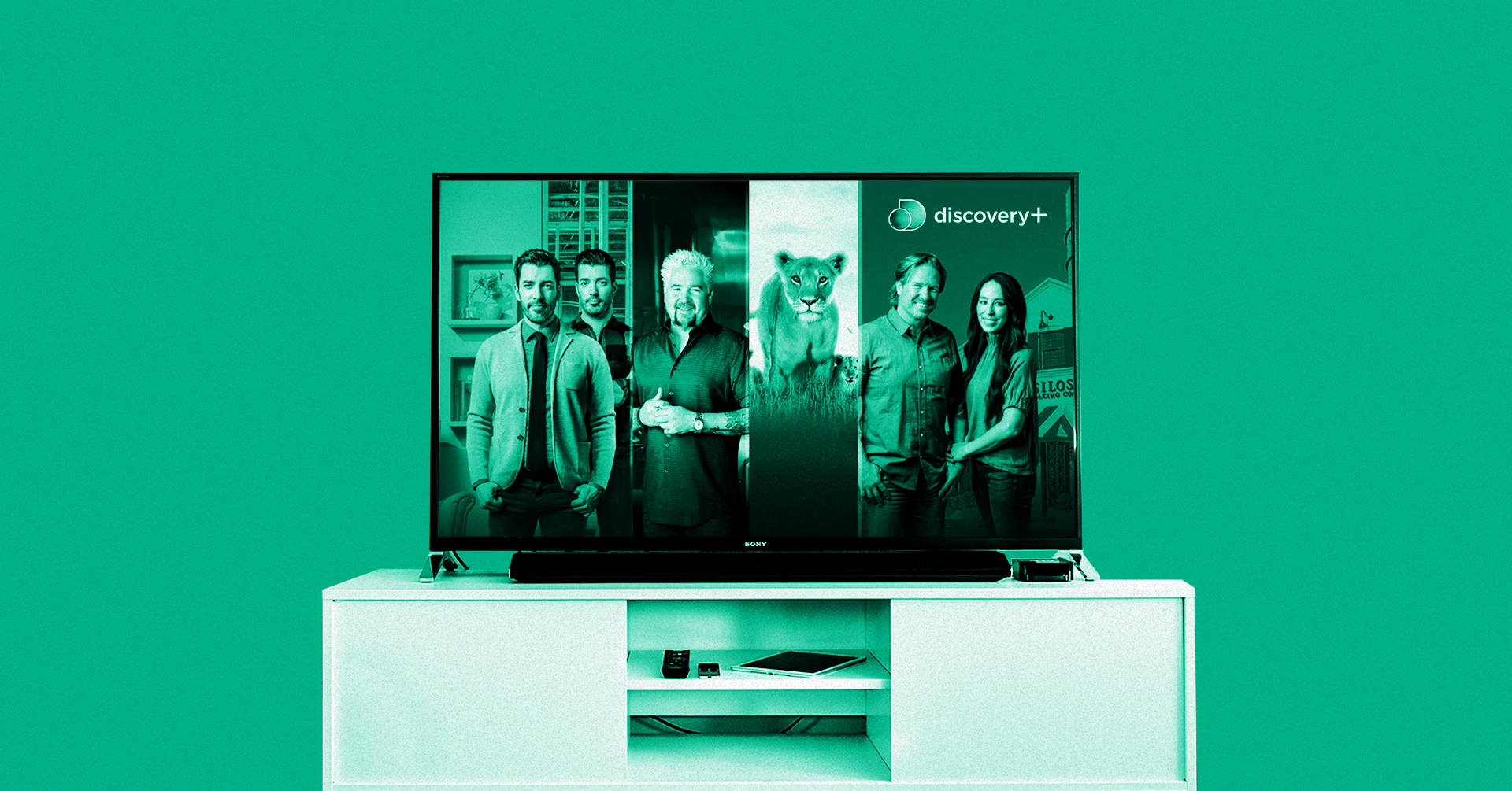 In a recent Morning Consult poll, 30 percent of respondents said they are likely to subscribe to Discovery+, which launched on Jan. 4. (Unsplash / Morning Consult artwork by Samantha Elbouez)
By Sarah Shevenock

A new year, a new streaming service. But this one comes with a bit of a twist.

When Discovery Inc.’s Discovery+ streaming service launched Jan. 4, its non-fiction programming had nary a stranger thing, a trio of dragons or a Baby Yoda in sight. What it did have was more than 55,000 episodes across 10 different genres, including food, relationships, nature and true crime.

“The unique selling point of Discovery+ is the depth and breadth of content in those categories across a variety of brands under one roof,” Steve Nason, research director at market research company Parks Associates said in an email. “Few if any can rival their content offering in that respect.” 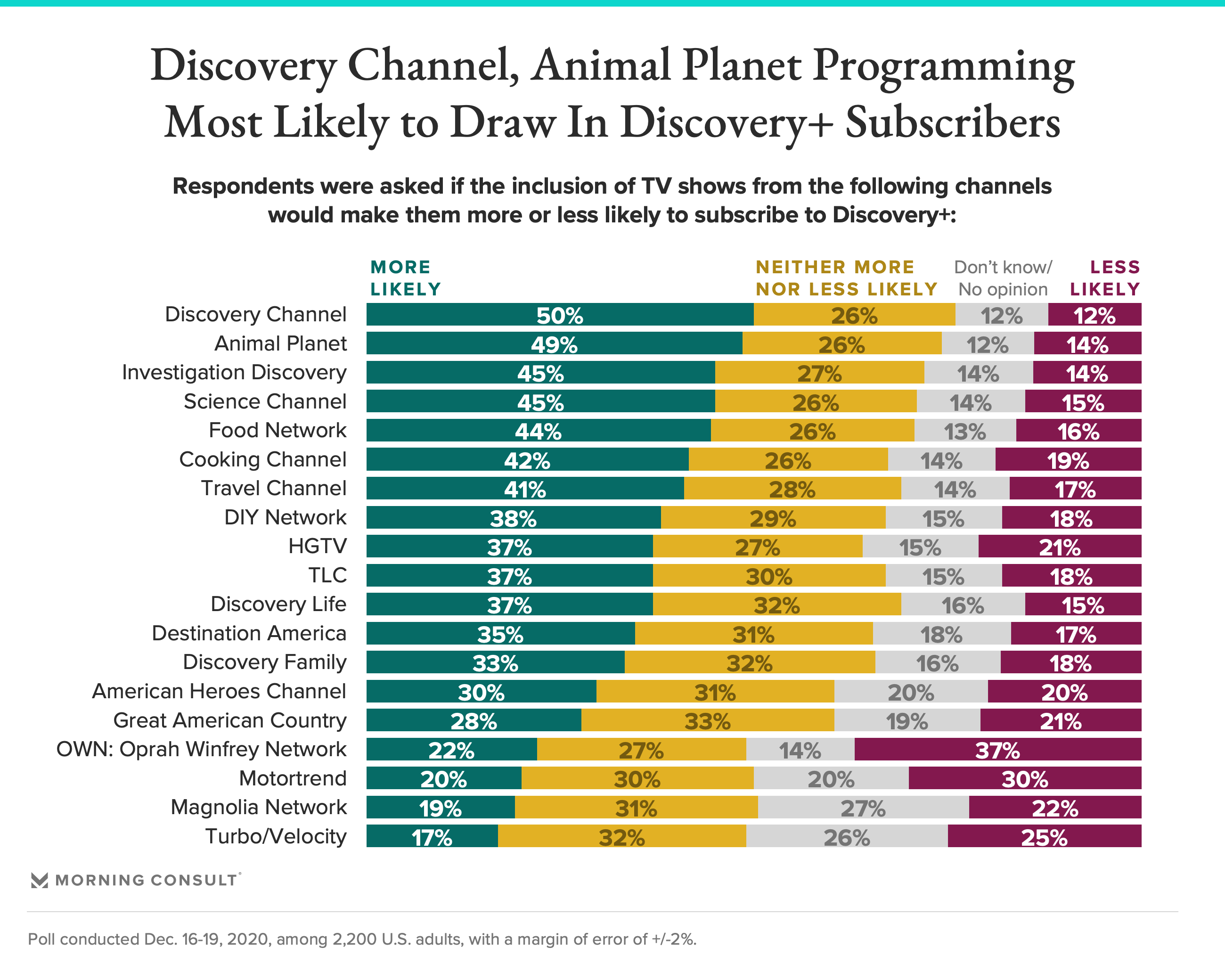 A significant share of the public is ready for that content, according to a Morning Consult poll conducted Dec. 16-19, 2020.

Thirty percent of U.S. adults said they’re likely to subscribe to the service, including 12 percent who said they were “very likely.” That pool of possible subscribers is mostly male (56 percent) and young (59 percent are Gen Zers or millennials), and more likely to make under $50,000 per year (46 percent) and live in urban spaces (49 percent) than respondents in a typical Morning Consult survey.

But no successful streaming service has launched within the last few years without an exclusive show or film: Disney+’s “The Mandalorian,” Apple TV+’s “The Morning Show” or HBO Max’s streaming acquisition of sitcoms such as “Friends” and “The Big Bang Theory.” Most recently, Peacock snagged “The Office.”

While Discovery+ relies less on a single flashy title, experts say the depth and breadth of its catalog, as well as the personalities who anchor its programming, will serve as its selling point.

In its first year, Discovery+ promises more than 1,000 hours of exclusive original content, including Chip and Joanna Gaines’ “Fixer Upper: Welcome Home” and “Magnolia Table with Joanna Gaines,” an expansion of the “90 Day Fiancé” franchise and the U.S. premiere of Sir David Attenborough’s new nature documentary, “A Perfect Planet.” 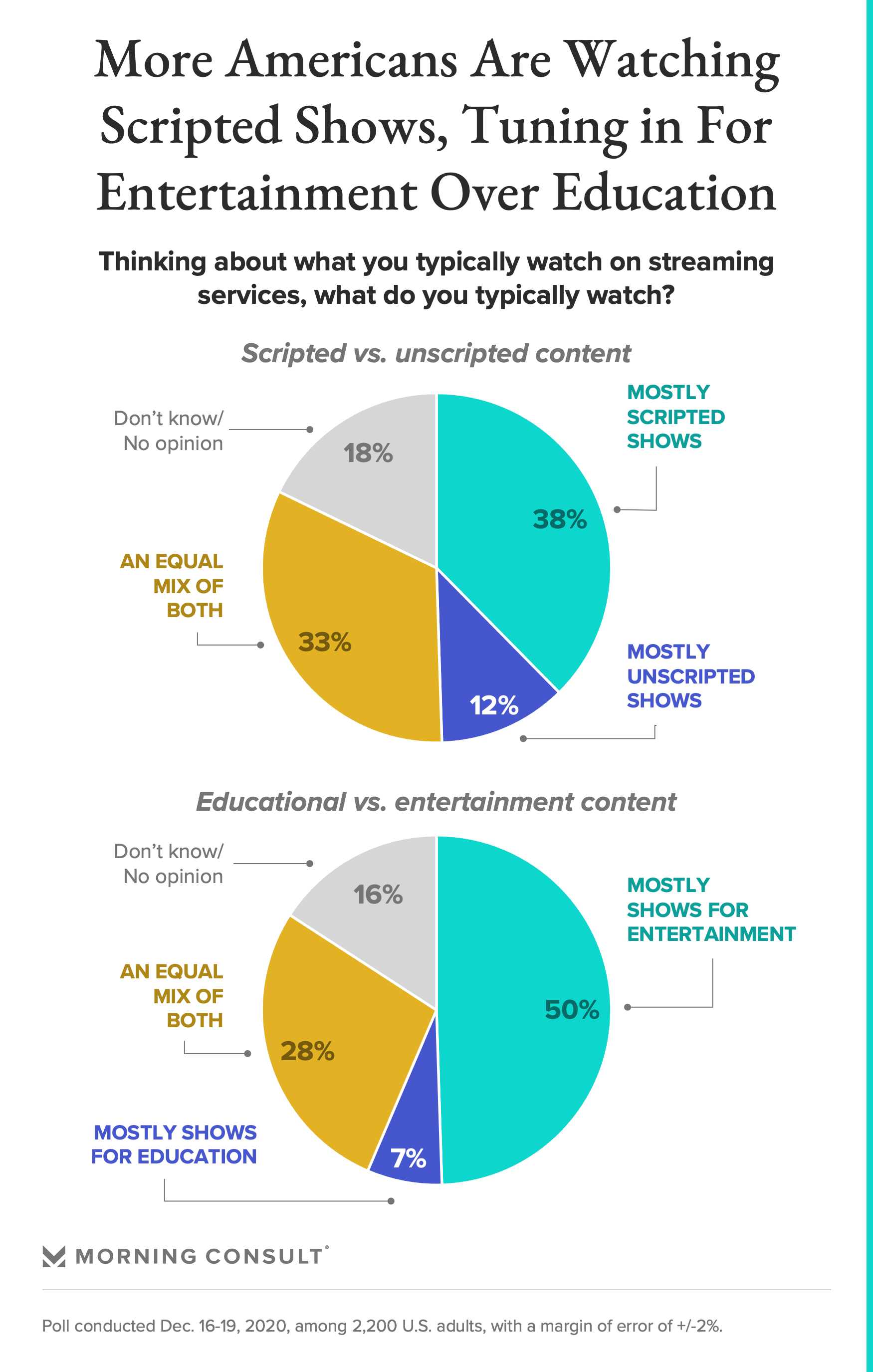 Discovery+’s education-focused catalog, however, might miss the mark for some viewers.

The poll found that, while one-third of the 2,200 U.S. adults surveyed said they watched an equal amount of scripted and unscripted programming, 38 percent said they watched mostly scripted TV shows. Twelve percent said unscripted content — such as reality shows, documentaries or home shows — accounted for the majority of their viewing. Half of respondents also said they mostly watched TV shows for entertainment rather than educational purposes.

Discovery faces the challenge of getting viewers to pay directly for content they may have only watched because it came bundled with their cable package, according to Allen Adamson, a founder and managing partner of brand marketing firm Metaforce.

“Consumers are finally having to buy each separate piece of content a la carte,” Adamson said. “When people buy packages, they don’t necessarily examine every item in the package, then make an overall decision. But when you’re being charged for every show you watch, it’s going to change the dynamics.”

Another challenge for Discovery is one WarnerMedia faced with its own streaming service, HBO Max: how to advertise all the brands in the parent company portfolio under the name of only one brand. In addition to content from the Discovery Channel, Discovery+ includes shows from networks such as Animal Planet, Food Network, HGTV, TLC and OWN: Oprah Winfrey Network.

“Any service such as Discovery+ that employs a ‘house of brands’ approach to its offering such as Disney+, HBO Max, and Paramount+ has to educate video consumers on what content will be comprised under that one roof,” Nason said. 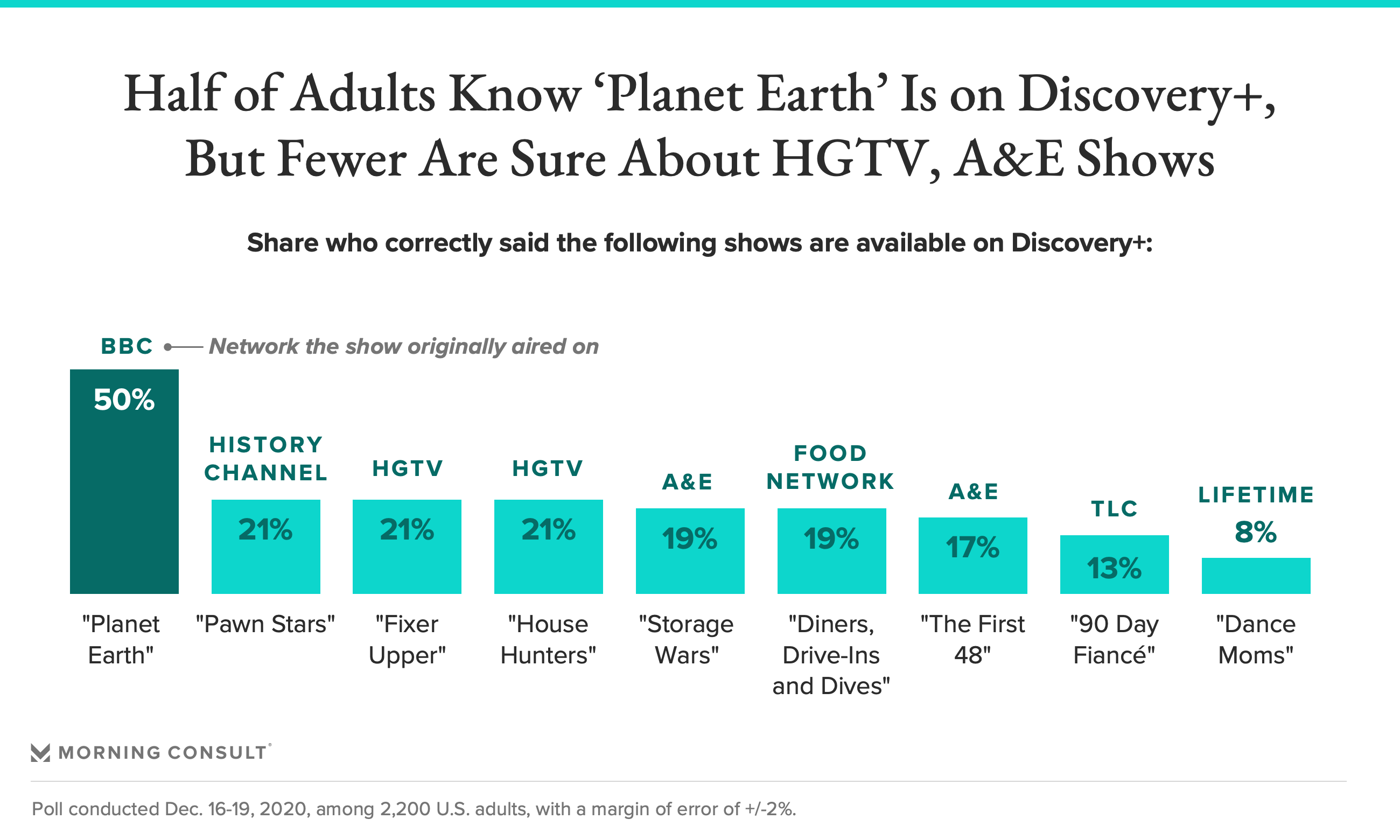 Given a list of TV shows, survey respondents were asked to identify which titles would be available on Discovery+. Half of adults knew the documentary series “Planet Earth” would be available, but just roughly one in five knew that lifestyle and reality titles including “Fixer Upper,” “Diners, Drive-Ins and Dives,” “The First 48” and “90 Day Fiancé” would be part of the Discovery+ library.

The lack of synergy between wildlife documentaries, home repair programs and reality dating shows makes it hard to include all of the brands in Discovery’s portfolio under one master brand, according to Adamson.

“Discovery is hardwired to wildlife and nature, and people value that type of programming,” he said. “Just having a ‘plus’ next to it usually just communicates that there’s lots more wildlife — it doesn’t allow people to switch channels in their head and say, ‘Oh, Discovery also includes discovering cooking and discovering how to do home repairs.’”

“No new streaming platform can successfully market all of its content right away, especially one that has a library of 55,000 video episodes,” Demas said in an email.

Across its networks, Discovery has tried to explicitly make viewers aware of its new OTT offering, including a countdown clock that ticked down the minutes until the Discovery+ launch, airing TV spots for the service on its networks and giving cable viewers a sneak peak of Discovery+ shows. Its logo is also featured in advertisements for streaming exclusive spinoffs like “Fixer Upper: Welcome Home.”

The service’s vast library and devoted fan base leads Demas to believe that Discovery+ will find success as both a core service and niche service in the long run.

“It won’t be at the scale of a Disney+, Hulu, HBO Max or Peacock,” he said. “But given its vast array of content, well-known personalities and strong distribution, Discovery+ will be one of the winners in the streaming wars.”