An Inaugural Inflection Point: Ushering in a New Era of Marketing Amid a Polarized Public

Morning Consult’s Victoria Sakal explores what increasingly divided and discerning "citizen consumers" mean for brands' role in building back better in their businesses - and in society - in the year ahead. 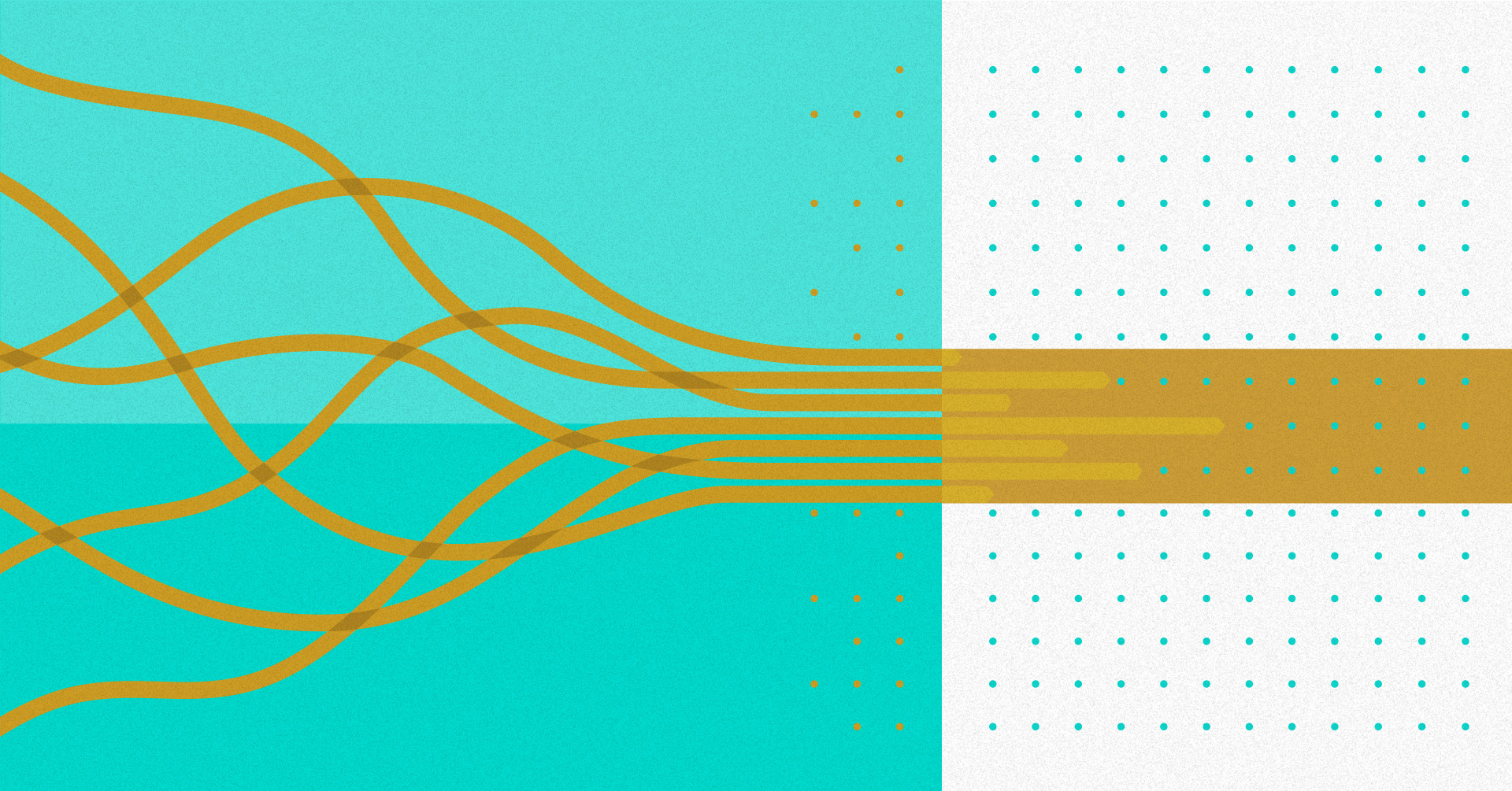 New Morning Consult analysis shows 37 percent of adults have stopped buying from a brand they liked upon learning the brand acted unethically or improperly -- a 12-point increase from the share indicating this in 2019. (Morning Consult artwork by Vladimir Gorshkov)
By Victoria Sakal

When President-elect Joe Biden takes office on Wednesday, he will be leading a country that has never been more politically polarized. And as consumers’ faith in traditional institutions falls, they are increasingly looking to brands and business leaders to shepherd them through the torrent of headlines defining our current reality to a new reality — one where greater unity leads to greater progress.

Brands and the executives that lead them now face a herculean challenge: how to resonate with a divided consumer base while also embracing their new, evolved role in society.

To be sure, the inauguration of a far more traditional commander in chief could reshape how corporate America and brands interact with politics and society in 2021 and beyond, but companies and their leaders will nonetheless wield more power than ever before.

Morning Consult’s tracking of Americans’ changing expectations around brands’ engagement in society, role in consumers’ lives, and responsibilities as the social and political environment shifts reveals what the American “citizen consumer” cares about, important nuances across different audiences, and what this far-from-united landscape means for the 2021 corporation seeking to maintain or revive growth in the year ahead.

Americans are largely united around top priorities for the year ahead: COVID-19, as reported cases hit record highs; the economy, as unemployment and financial strain remain high; health care, as coverage lapses and costs spiral; and racial justice reform, as Black and brown Americans continue to highlight the societal inequalities they face.

But Democratic trust in the election process has risen as Republican trust plummets, with just 27 percent of GOP voters saying they trust U.S. elections (down from 30 percent in late December and 72 percent in late September) and even fewer Republicans (22 percent) considering the 2020 presidential election free and fair. This has translated to waning consumer confidence among Republicans; consumer confidence also continues to drag among lower-income consumers.

Indeed, stark differences in the current state of consumers’ well-being and attitudes run deeper than political lines. Beyond the election, 77 percent of U.S. adults found 2020 worse than 2019, with 59 percent expecting 2021 to be an improvement. But important nuances exist: 11 percent said their 2020 was better than 2019, a figure roughly doubling among those with a postgraduate degree or those earning more than $100,000 annually.

Specifically, Americans’ mental health and personal finances suffered the most in 2020, though again with variances by educational attainment and financial situation.

The Changing Role of Corporations & Their CEOs

Top issues driving Americans’ votes in the 2020 election, coupled with changing attitudes toward the role of business in politics, society, and in consumers’ lives has set the stage for heightened — though nuanced — expectations of brands and their transformed responsibilities in 2021 and beyond. 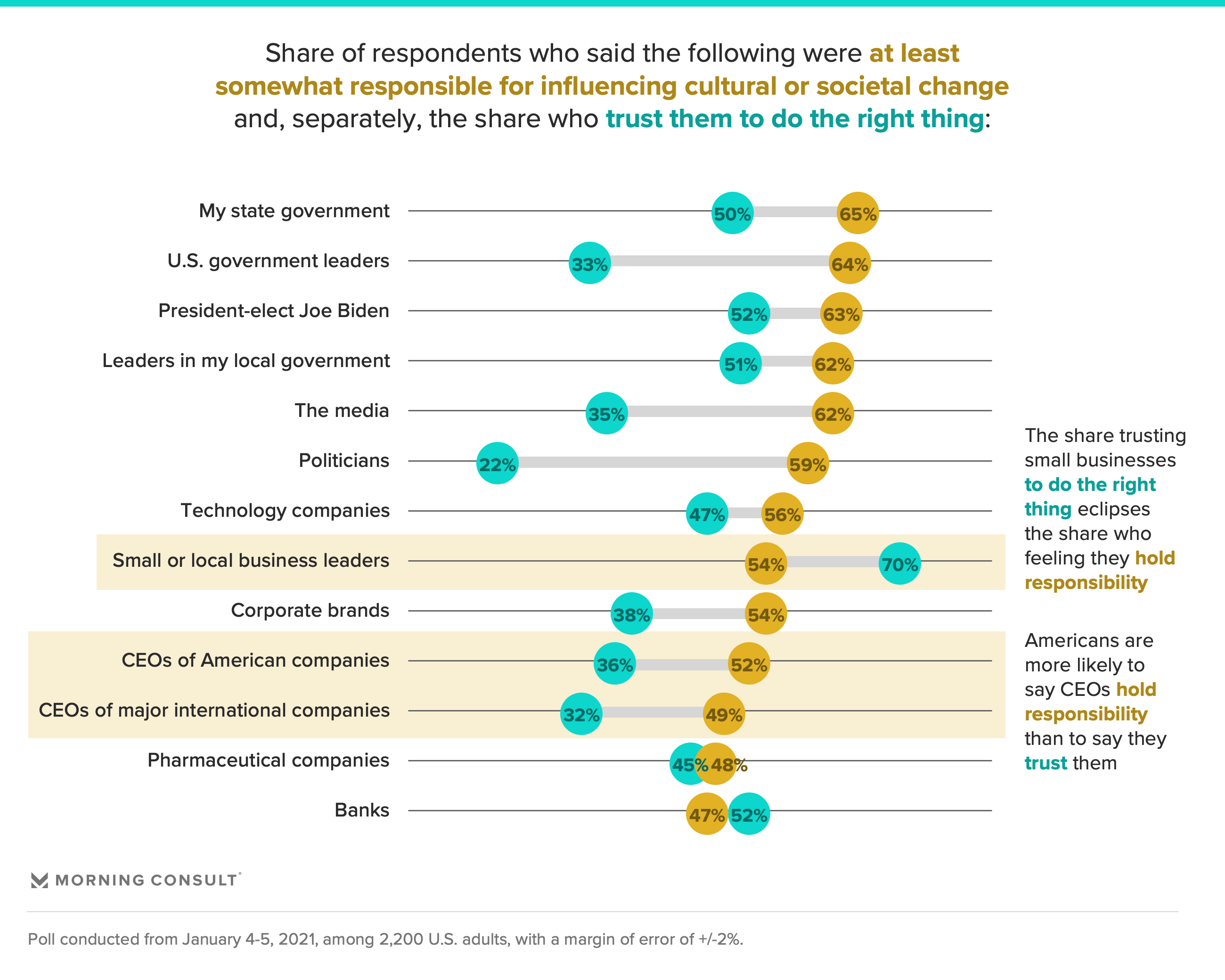 The vast majority of Americans hold corporate brands and CEOs of major corporations responsible for influencing cultural or societal change, but that doesn’t mean the public entirely trusts them. A substantial 16-point gap exists between the share holding these entities responsible and the share trusting them to do the right thing.

With trust in government institutions down and an uptick in rosier perceptions of American corporations, it’s perhaps no surprise that while most adults prefer that companies stick to what they do and not get involved in political or cultural matters, a growing share (31 percent) feels corporations should use their influence to impact important issues – a 63 percent increase from August 2019. 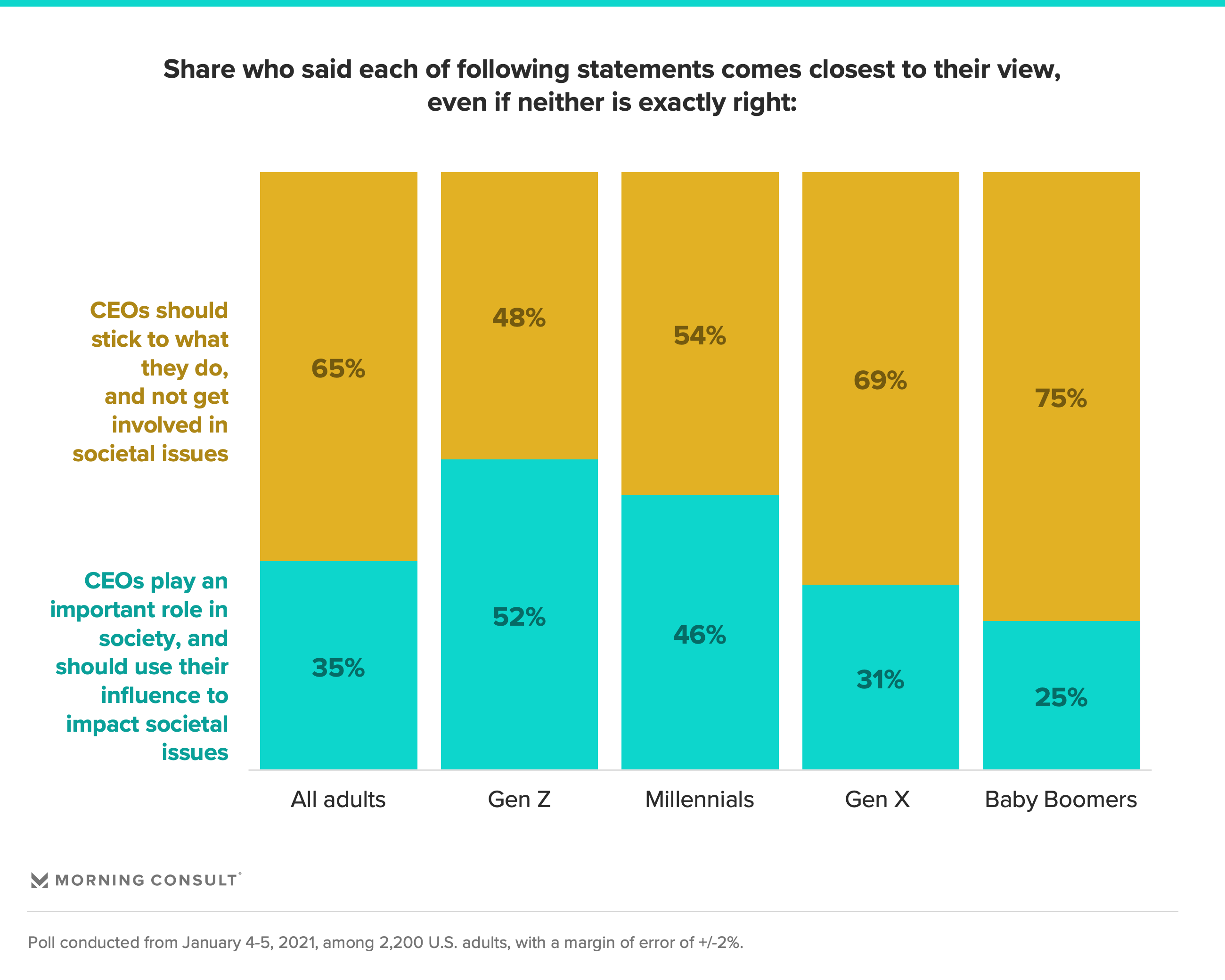 Similarly, though most consumers think CEOs should stick to their business and not get involved in political discourse, a fair share (35 percent) says the opposite, with younger consumers especially adamant about chief executives doing more than oversee their companies.

Understanding the evolving role of a company according to today’s demanding and discerning citizen consumer helps to explain these changing expectations of brands.

The national reckoning around racial injustice and the debilitating global pandemic that defined 2020 also fueled the importance of stakeholder capitalism. Forty-two percent of Americans think companies should prioritize shareholders last, a 10-point increase since May 2020, while seven in 10 believe a company’s employees or customers should be among the top two most-prioritized stakeholder groups. 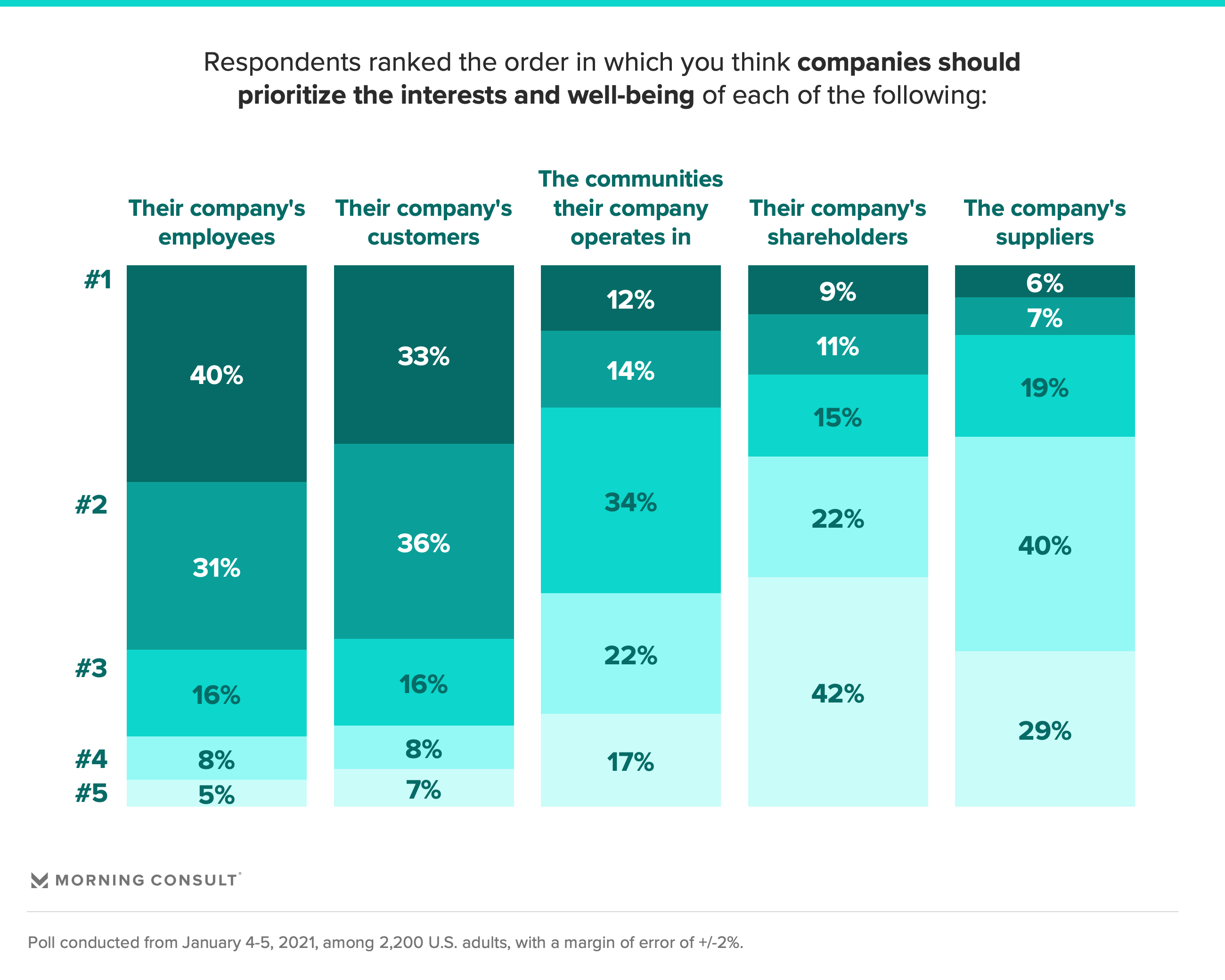 Americans overwhelmingly agree that many facets of stakeholder capitalism are within the scope of a company’s responsibility — taking care of and treating employees well, in particular. Again, perceivable differences in corporate responsibilities exist by political identification, income and education level, generation, region, community type and, in some cases, even gender, but there’s near-universal agreement on the relative importance of stakeholders. 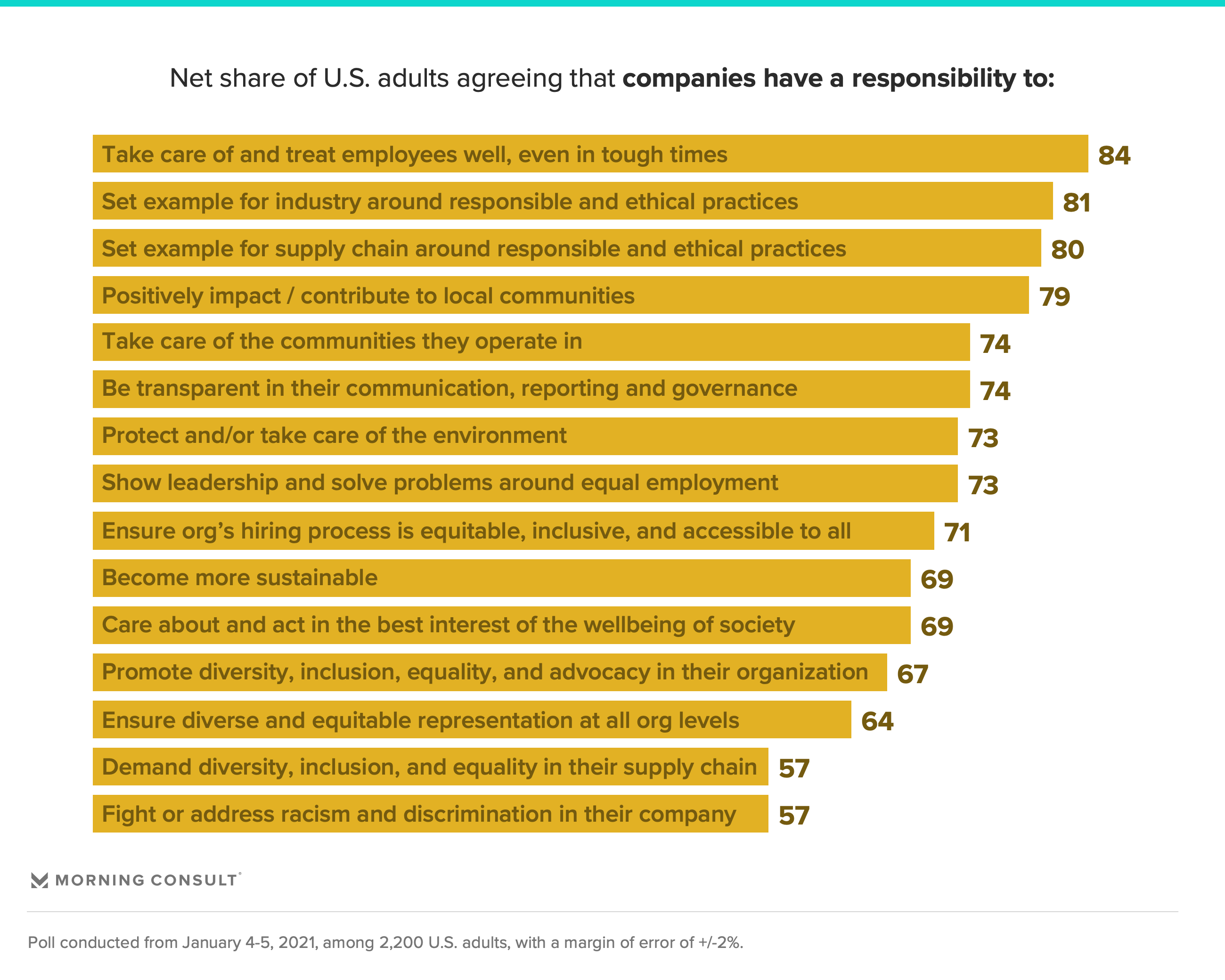 These changes in consumer and employee expectations of companies’ and CEOs’ influence on social and political matters have real implications for brand perceptions, spending decisions and the evolving role of companies.

Specifically, at least 68 percent of U.S. adults say a company’s treatment of employees, customers and society more broadly plays an important role in their purchasing decisions, though nuances exist across consumer groups: 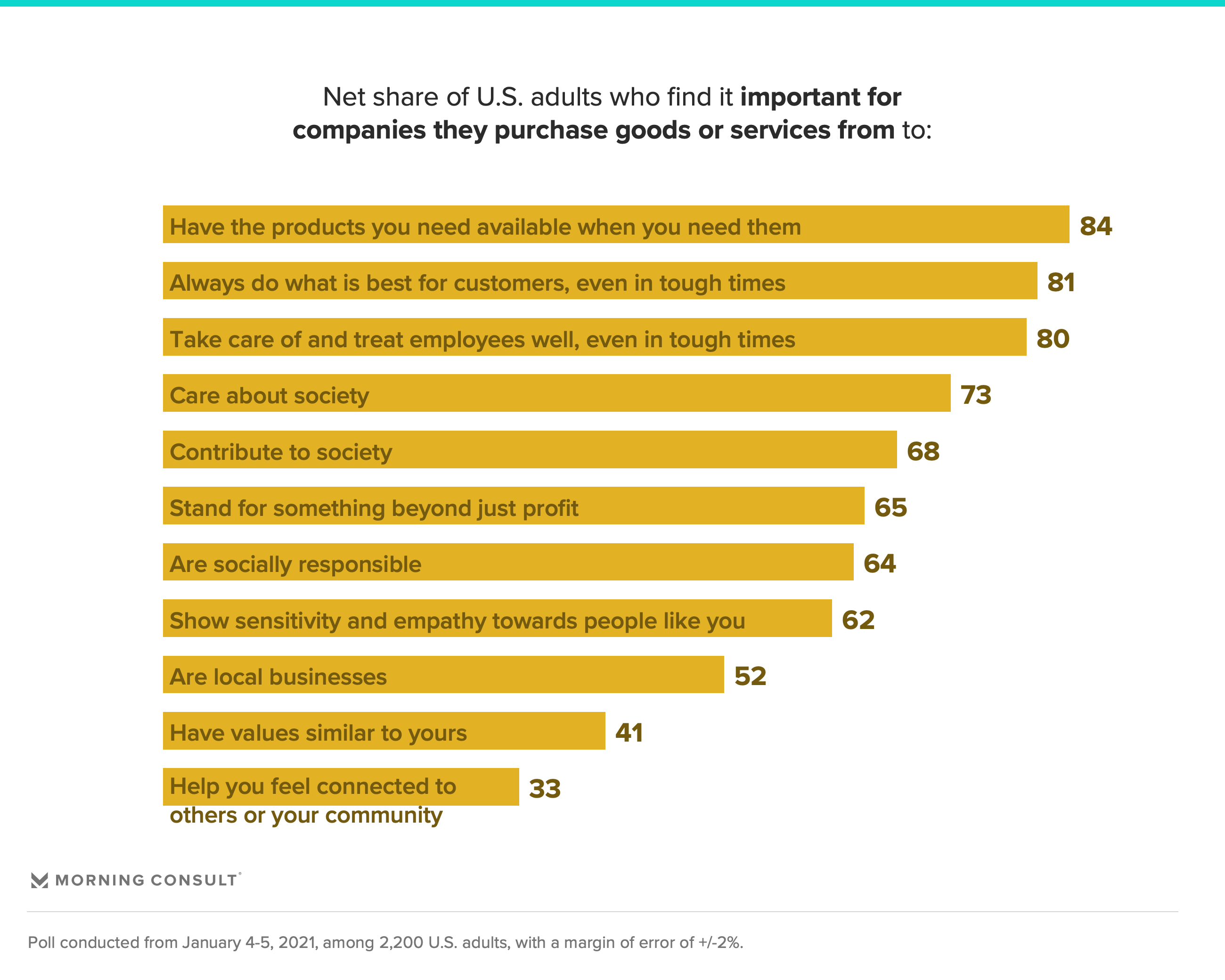 Taken together, it’s clear that few qualities are universally important and relevant to all Americans, underscoring how fractures in ideologies, backgrounds and livelihoods will translate to notably different brand engagement and purchasing behaviors. 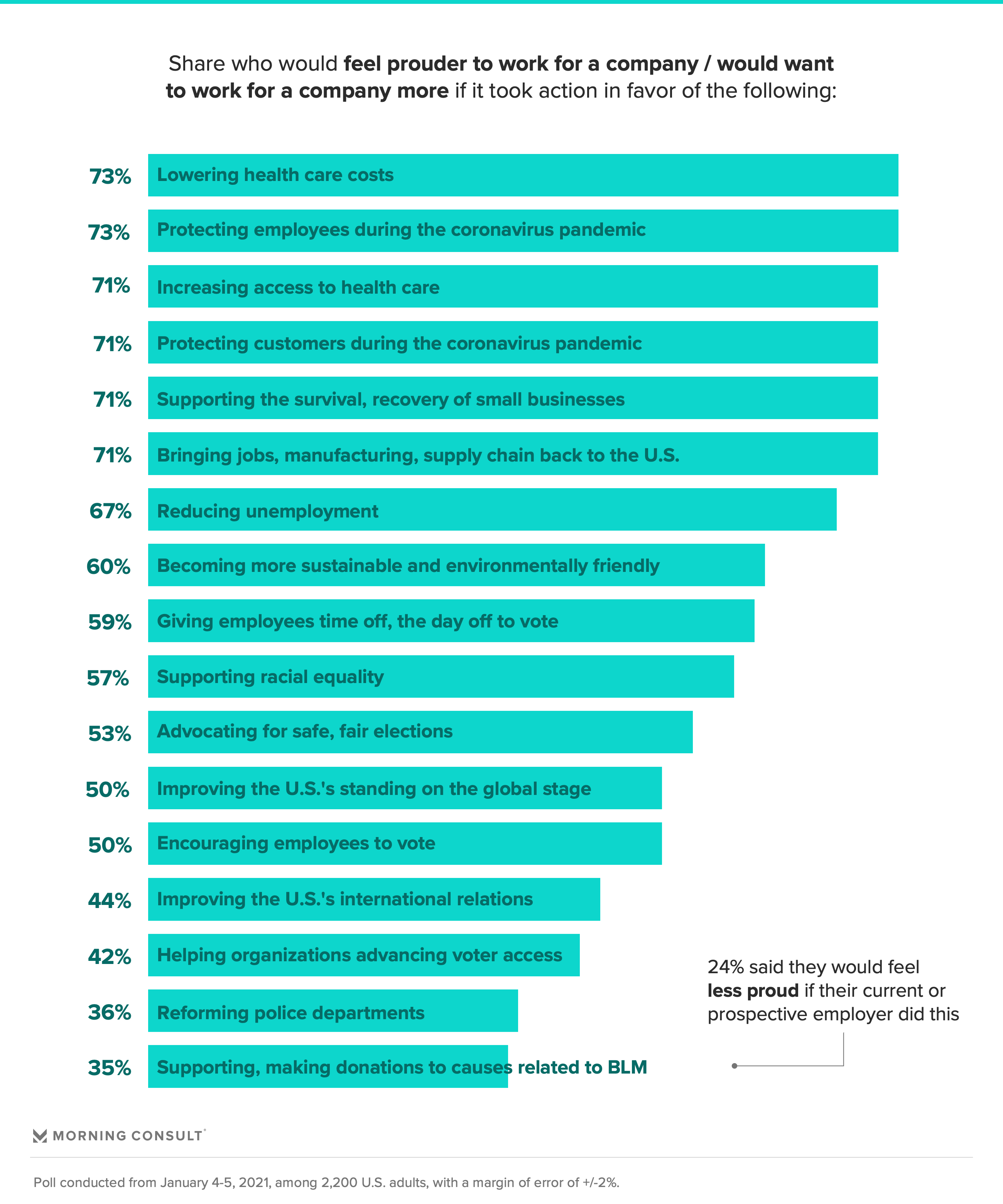 This patchwork of needs, priorities and expectations presents a complex challenge for brands. With passive consumerism a relic of pre-pandemic life, brands need a deep understanding of who their audience is and what they care about as relates to both society and consumption in order to understand how to message and position themselves around whatever is to come in 2021.

Sixty percent of Americans report paying some or a lot of attention to ethical and political matters relating to companies they buy from: Democrats (68 percent) and younger generations (68 percent) notably more so than their peers, with urbanites and those with higher incomes and education levels also twice as likely to pay a lot of attention.

To be sure, most (59 percent) would prefer companies act responsibly and ethically but are ultimately willing to overlook some issues for an item they like at the right price.

Thirty-seven percent of adults report having stopped buying from a brand they liked upon learning the brand acted unethically or improperly — a 12-point increase from the share indicating this in 2019. Other reasons behind consumers quitting brands further reflect deep fault lines in priorities and the degree of consumer activism shoppers will engage in: 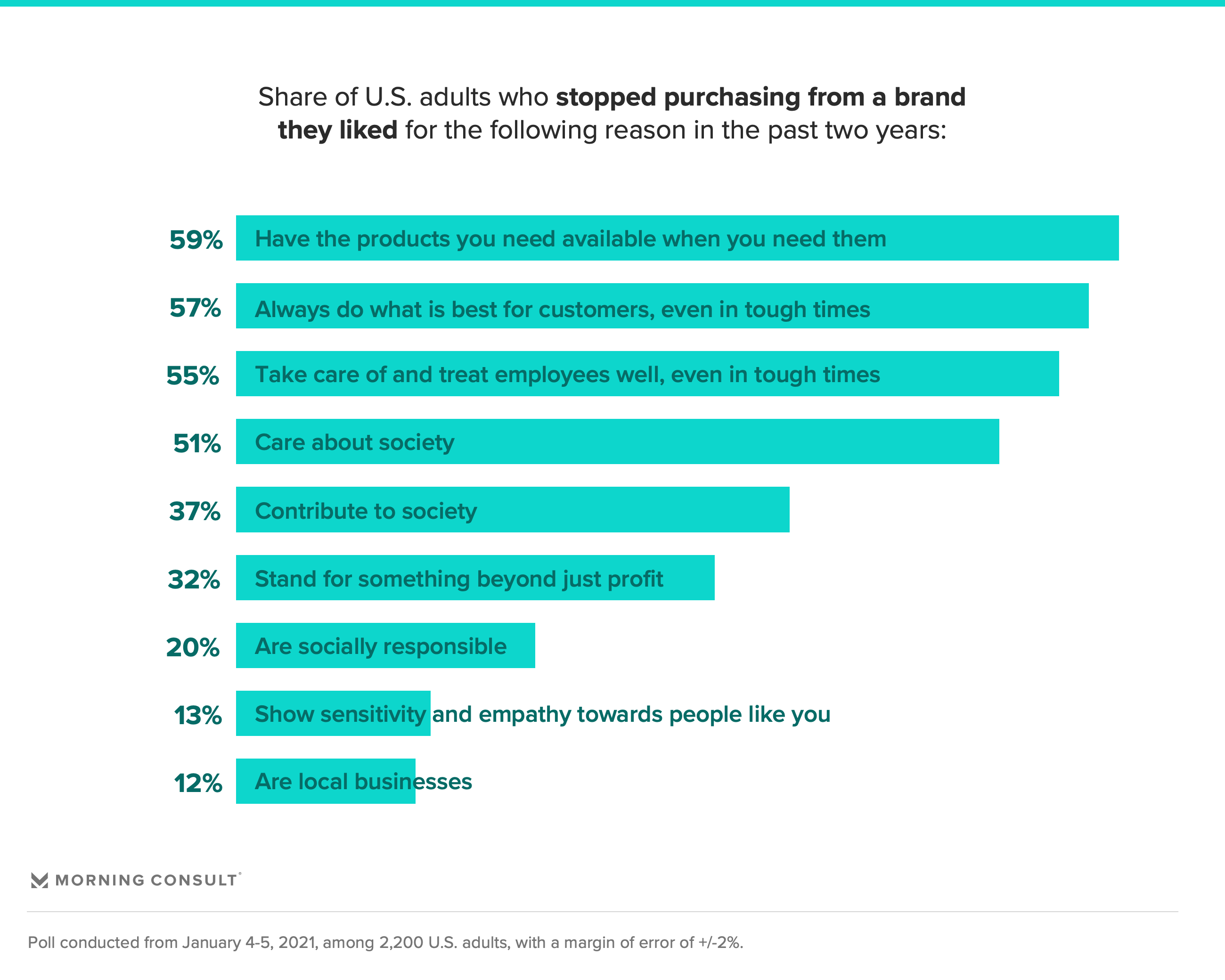 Still, majorities of Americans have neither spent money to support a company (83 percent) nor boycotted one because of a political stance in recent years (77 percent). And, while 27 percent of Americans say environmental, social and corporate governance matters are a major factor they consider when deciding whether or not to buy from a company, a sizable plurality (49 percent) rate this as only a minor factor at best.

Taken together, and noting that no significant differences in sentiment exist across demographic groups, marketers can be reassured that though consumer sentiments may be strong and disparate, their bark may be louder than their bite with some of the especially pressing issues companies are facing in 2021.

Overall, these trends and underlying nuances confirm that 2020 left consumers more conscious of their power to influence, discerning in their decisions and willing to vote with their wallets — though the issues that different consumer groups are willing to rally around often vary widely.

Corporate leaders were increasingly pushed into the public spotlight in 2020, and that spotlight will only grow in 2021.

With Biden, corporate leaders around the world will have a new administration to engage with and a new geopolitical environment to navigate, while also managing the fragmented expectations and nuanced needs of a more polarized consumer base. And while there is certainly a sigh of relief with an incoming president that won’t encourage consumers on Twitter to boycott their brand, these partisan divisions will make 2021 anything but relaxing.

As we wait to see what this year will bring, brands can only win in the short term by remaining consistent in their purpose and staying close to their audiences: Understand what is important to customers, support and relate to the fundamental values that define them, and embrace their expanded remit in the fabric of society.