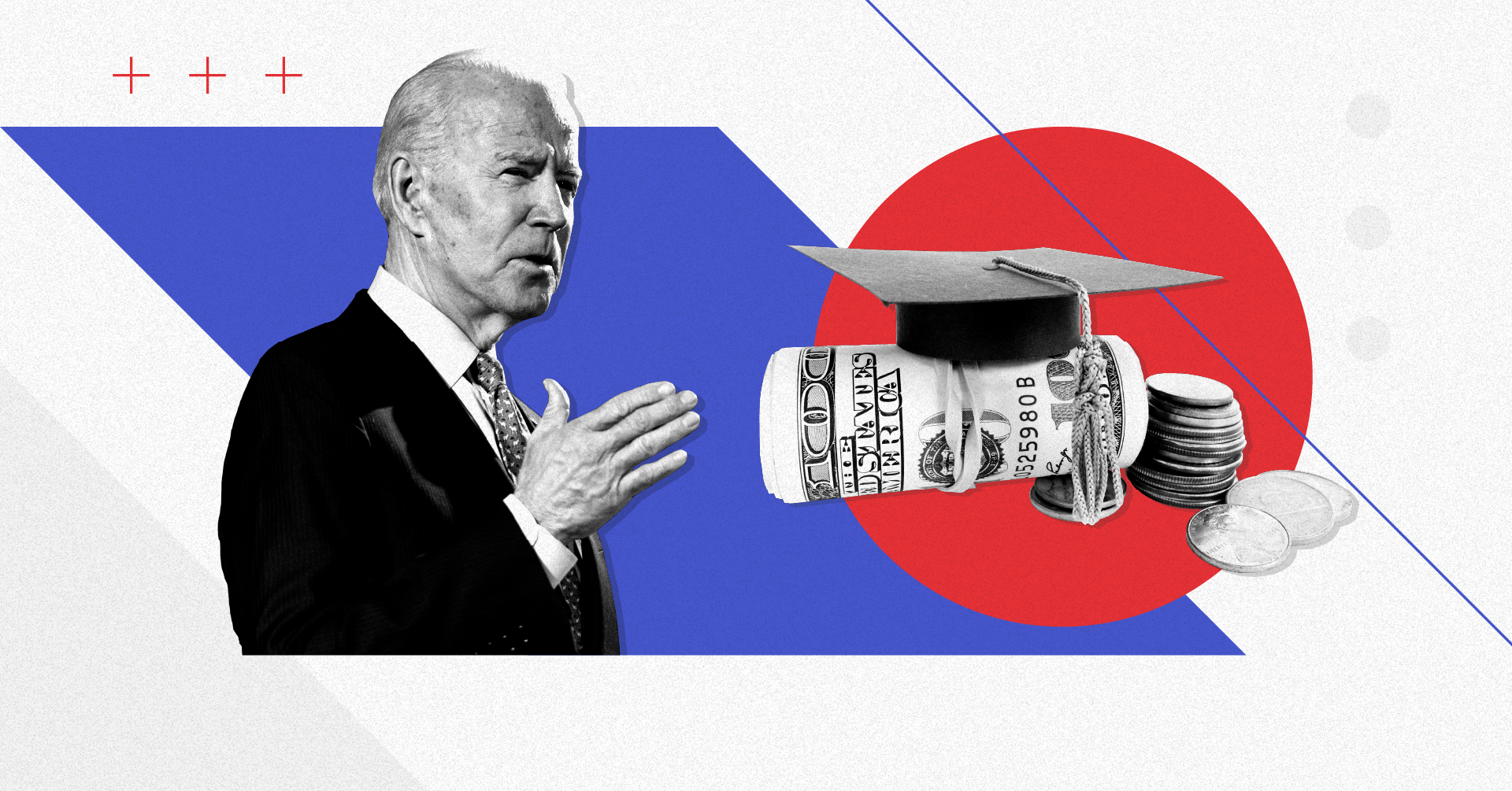 This is part of a suite gauging Americans’ priorities for the incoming administration on a variety of pressing issues in the political, policy and business spaces. See our other work analyzing voters’ preferences on health care, the environment, the economy, finance and the general approach to governing, as well as how marketing leaders can look to flourish in a political landscape that is growing increasingly divided.

President-elect Joe Biden is inheriting an electorate in debt. Unlike his last tenure in federal office, much of that debt is in student loans, and how to grapple with that will be one of the most significant economic policy issues his administration will face in the next four years.

Since the 2008 financial crisis, student loans have grown more than any other kind of consumer debt, reaching nearly $1.6 trillion. Delinquencies for student loans also run much higher than other kinds of loans, and unlike other debt, borrowers can’t shrug it off, even if they go through bankruptcy.

Not only is this a problem for borrowers, but proponents for student loan forgiveness have argued that policies geared toward relieving student debt burdens would help the economy overall. During his campaign, Biden said he would sign legislation that canceled $10,000 in student debt for borrowers who make less than $125,000 a year. And in the runup to his inauguration, the first concrete promise Biden made for his incoming administration was centered on student loans — a transition official said that on “Day One,” the president-elect would direct the Department of Education to extend the pause on federal student loan payments.

So far, Biden’s $10,000 proposal, along with the idea of student debt relief, has proved popular among the public, according to a new Morning Consult poll. 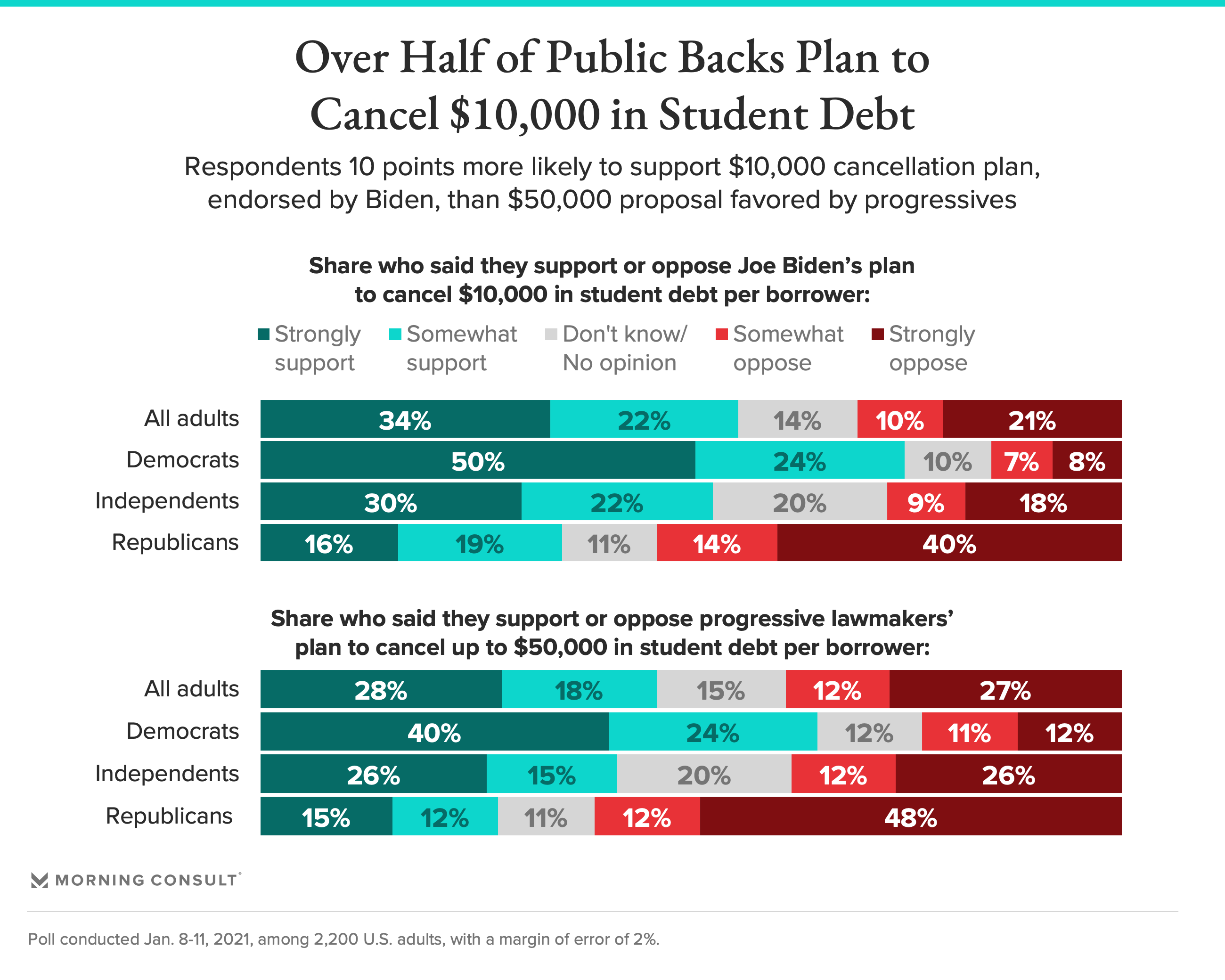 Independents swayed more toward backing the student debt relief plan at 52 percent versus 27 percent opposing it.

But fulfilling the more opaque pledge to address student debt could be a tricky political prospect. With an unexpectedly split Senate, passing some form of long-term relief is suddenly a more realistic possibility, and Biden will likely have to balance the calls from progressives in his party to seek more ambitious levels of forgiveness, with caution from moderates.

Progressives in Congress, including Sen. Elizabeth Warren (D-Mass.) along with Minority Leader Chuck Schumer (D-N.Y.), have advocated for high levels of debt forgiveness, up to $50,000 per borrower — likely a higher figure than Biden will want to pursue. Others, meanwhile, have argued that student loan forgiveness would be an expensive bailout for some individuals, particularly the wealthy and well-educated.

Party split trends were similar for the more ambitious student debt relief plan: A combined 64 percent of Democrats support canceling up to $50,000 in student debt per borrower, compared to 27 percent of Republicans and 41 percent of independents.

There could, however, be some argument that criticisms of student debt relief are resonating with Americans.

More than half (52 percent) said they somewhat or strongly agreed that student debt relief would largely help those who are already better off economically, including 47 percent of Democrats and 58 percent of Republicans. Forty-eight percent of adults disagreed with that statement.

A larger share thought that student debt relief would offer broader economic benefits. Sixty-five percent said that forgiving some student debt would improve the economy, compared to 35 percent who disagreed with that idea.