What Voters Want From Biden’s First Term, in Their Own Words

Written responses reveal that while economy and pandemic are top of mind, many would prefer to see the president-elect fail 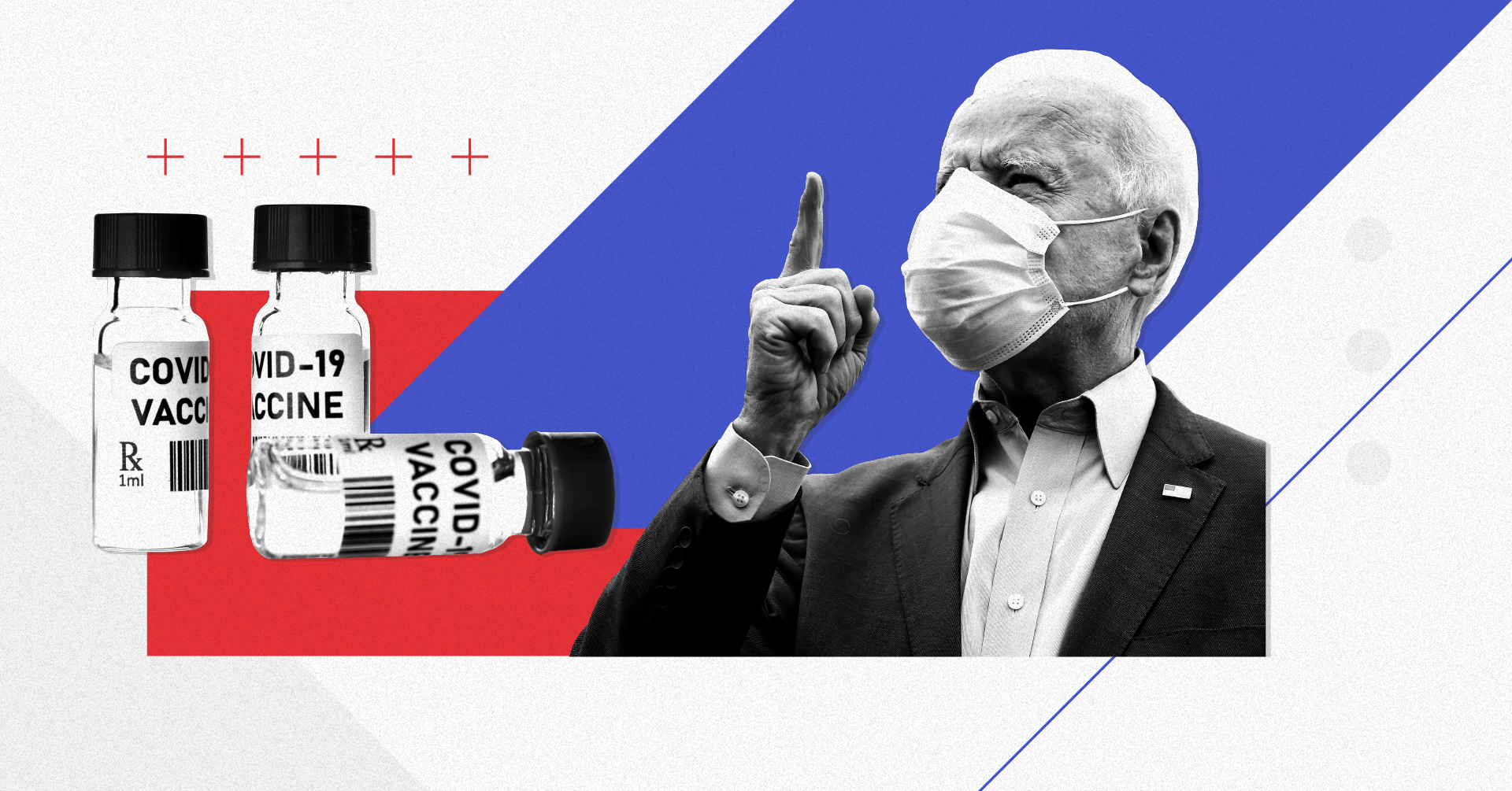 This is part of a suite gauging Americans’ priorities for the incoming administration on a variety of pressing issues in the political, policy and business spaces. See our other work analyzing voters’ preferences on health care, the environment, the economy, finance and housing, as well as how marketing leaders can look to flourish in a political landscape that is growing increasingly divided.

When President-elect Joe Biden takes office on Jan. 20, he’ll have to contend with some voters’ obvious expectations regarding what he should tackle during his presidency: getting the coronavirus pandemic under control and reviving the economy.

But a new Morning Consult analysis of open-ended responses from voters captures a sense of national acrimony that is sometimes belied by typical issue polling on Americans’ priorities for the government, with a number of Republicans offering up unfounded claims that the election was rigged and other anti-Biden sentiments, while many Democrats called for a unifying voice and restoration from 1600 Pennsylvania Ave.

The Dec. 29-30 survey, which gave 1,984 voters a blank slate to describe their top priority for Biden’s agenda during his first term as president, found that Americans were more likely to raise issues of a broader political nature than to seek resolution on COVID-19 and economic concerns, some of which are rooted in the downturn prompted by the pandemic. 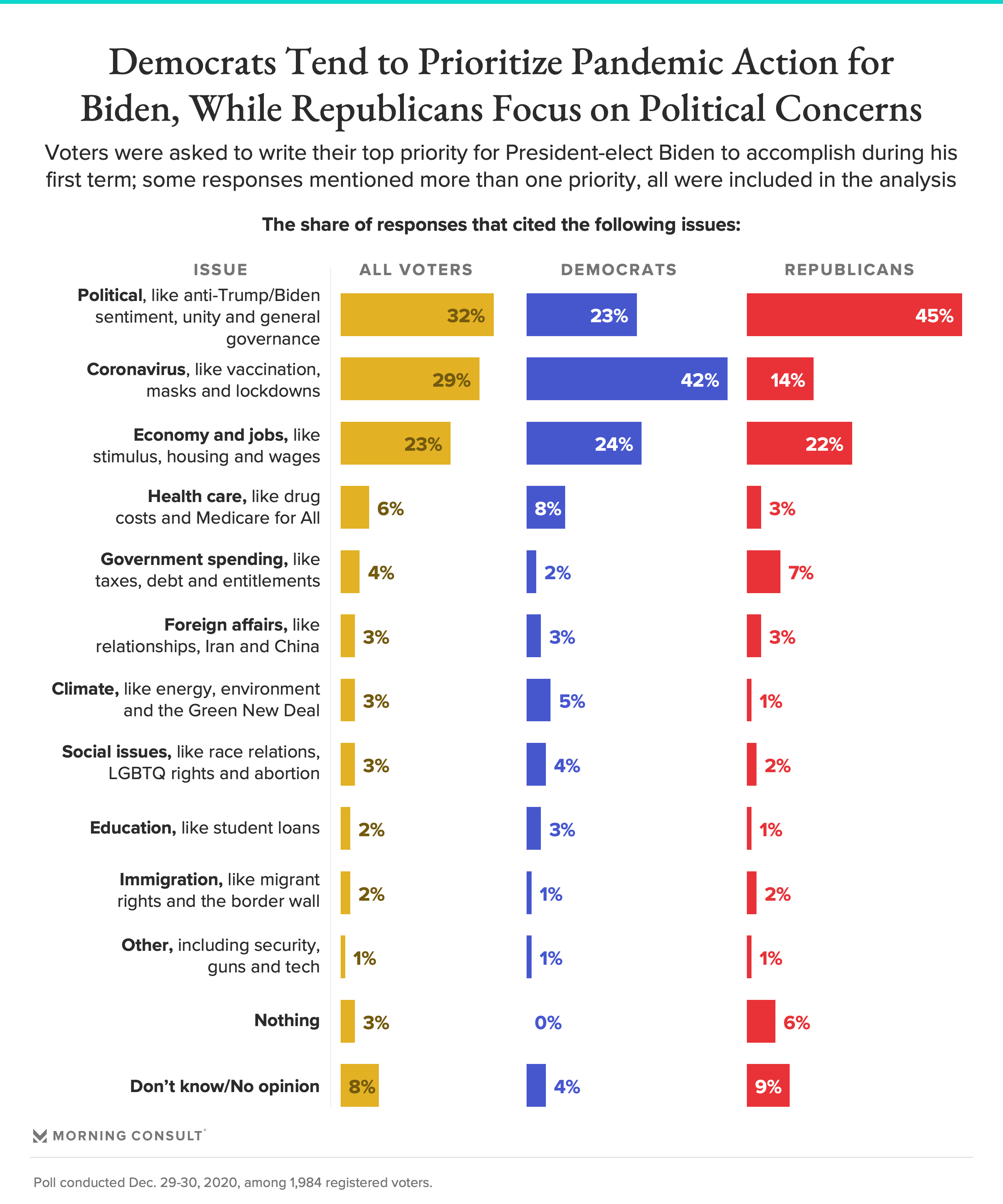 Among the 32 percent who used the space to offer general thoughts on governing and the state of politics, about a third were fairly general. Some called for normalcy after Donald Trump’s presidency, or — among a handful of Democrats — for Biden to accomplish “everything” or “a lot.”

Roughly 1 in 10 respondents with broader concerns about politics used words like “restoring,” “fixing,” and “unity” or suggested working or coming “together.” It was driven largely by Democratic respondents, but not exclusively: One Republican respondent wrote that he wished Biden “luck in attempting to unite America” but indicated that it was a long shot, citing “too much discord between parties to accomplish much.”

Bipartisan well-wishing, however, was an extreme outlier in the survey, which found an ample number of GOP voters echoing Trump’s unfounded claims of a “stolen” election, using such words as “rigged,” “cheat” and “fraud.” In the survey, which was conducted before the fatal riot on Capitol Hill and the congressional certification of Biden’s victory, many Republicans also expressed hopes that Biden would resign, get impeached or not live through his term. One respondent went further, explicitly mentioning a desire for Vice President-elect Kamala Harris and House Speaker Nancy Pelosi (D-Calif.) to go down with him. 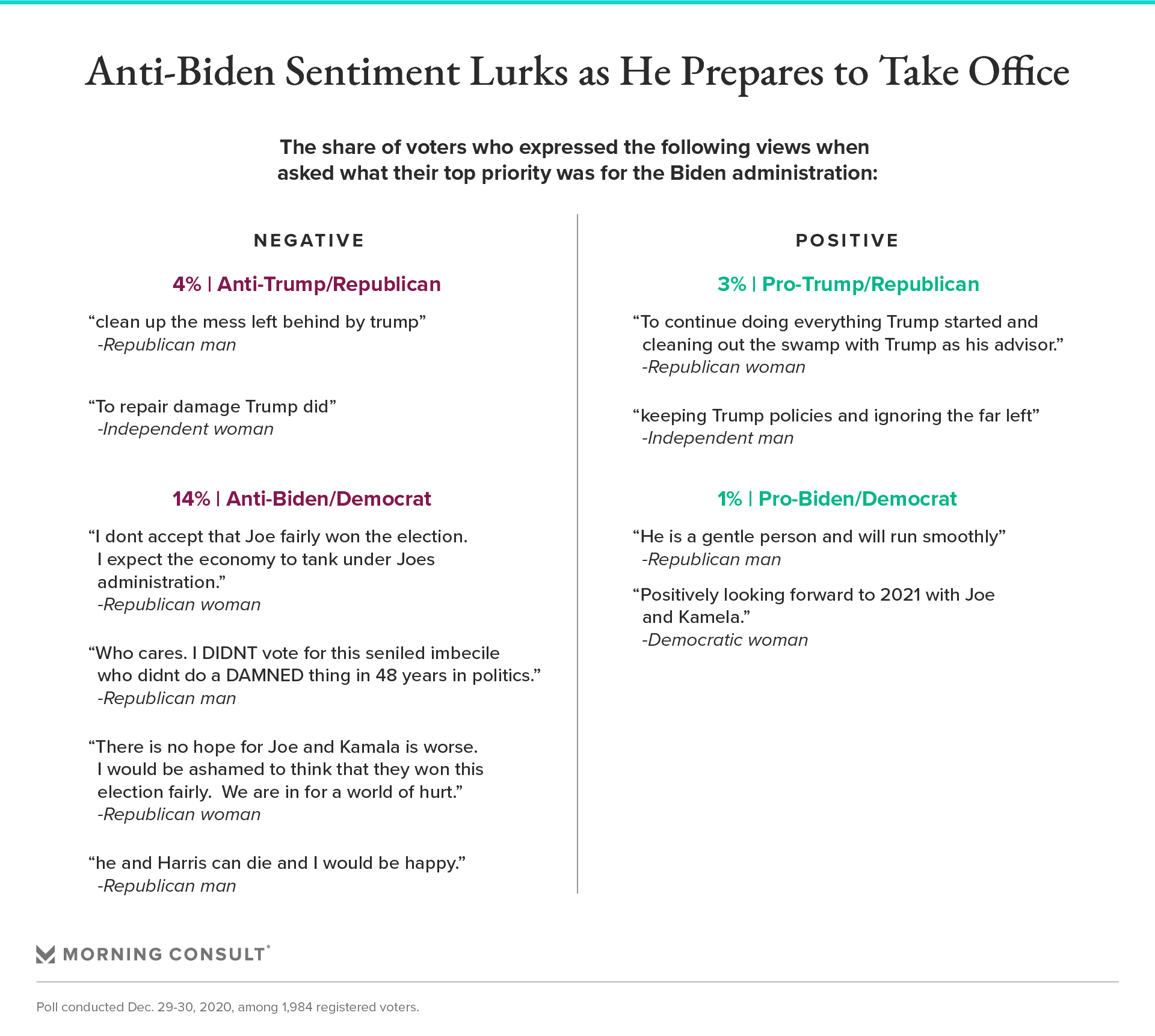 Overall, just about 1 percent of respondents expressed positive sentiment about Biden and the Democrats, compared with 14 percent who espoused negative thoughts about the incoming president and his Democratic administration – often wrapped in talk about socialism and the “radical” left, reflecting campaign messaging efforts led by Trump.

The findings are similar to a pre-Election Day analysis showing that issues of partisanship took as much prominence as pressing concerns such as the pandemic and the economy when considering their vote in the Trump-Biden contest. Topics such as health care, foreign affairs, climate change, social issues and immigration garnered far less attention, the latest analysis found.

Since the online survey gave respondents space to write out whatever they wanted in response to the prompt about their top priority for Biden to accomplish over the course of four years, many responses spanned multiple categories.

In a single response, a Democratic woman called for Biden to “give a bigger stimulus, legalize marijuanna and most of all bring back Medicaid for all and increase the minimum wage to $15,” while in another response, a Republican woman said she wants Biden to address the pandemic before turning to financing infrastructure projects.

“It seems like our roads have really taken a hit in the last decade,” she wrote. “This man has a lot to get under control, that is for sure.”

Among them are the top priority concerns in more traditional quantitative polling, where voters are asked to select priorities from a number of options. In the open-ended survey, roughly 3 in 10 voters – including 42 percent of Democrats and 14 percent of Republicans – said issues involving the COVID-19 pandemic, such as vaccinations and restrictions, should be the top priority for Biden’s term, while about a quarter (23 percent) raised economic concerns. 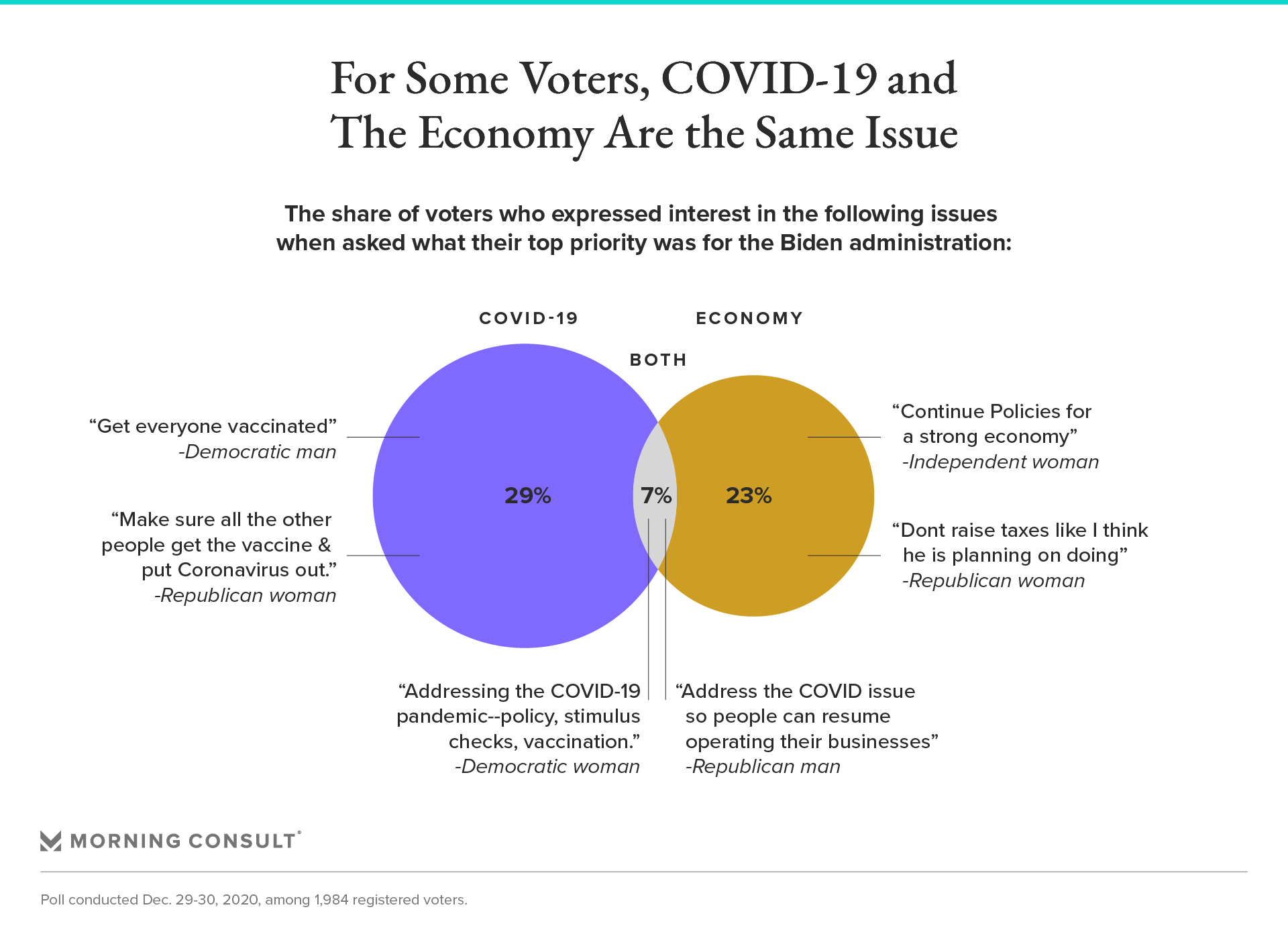 In 7 percent of responses, voters directly tied the pandemic and the economy together. “Mask mandate, more stimulus,” said a woman who identified as an independent, while one Republican man urged Biden to “tackle COVID 19 pandemic without crippling the future US economy.”

Voters’ priorities for the economy individually were generally broad, through roughly a quarter of the responses focused on things like jobs and wages. They were more specific when it came to the pandemic. 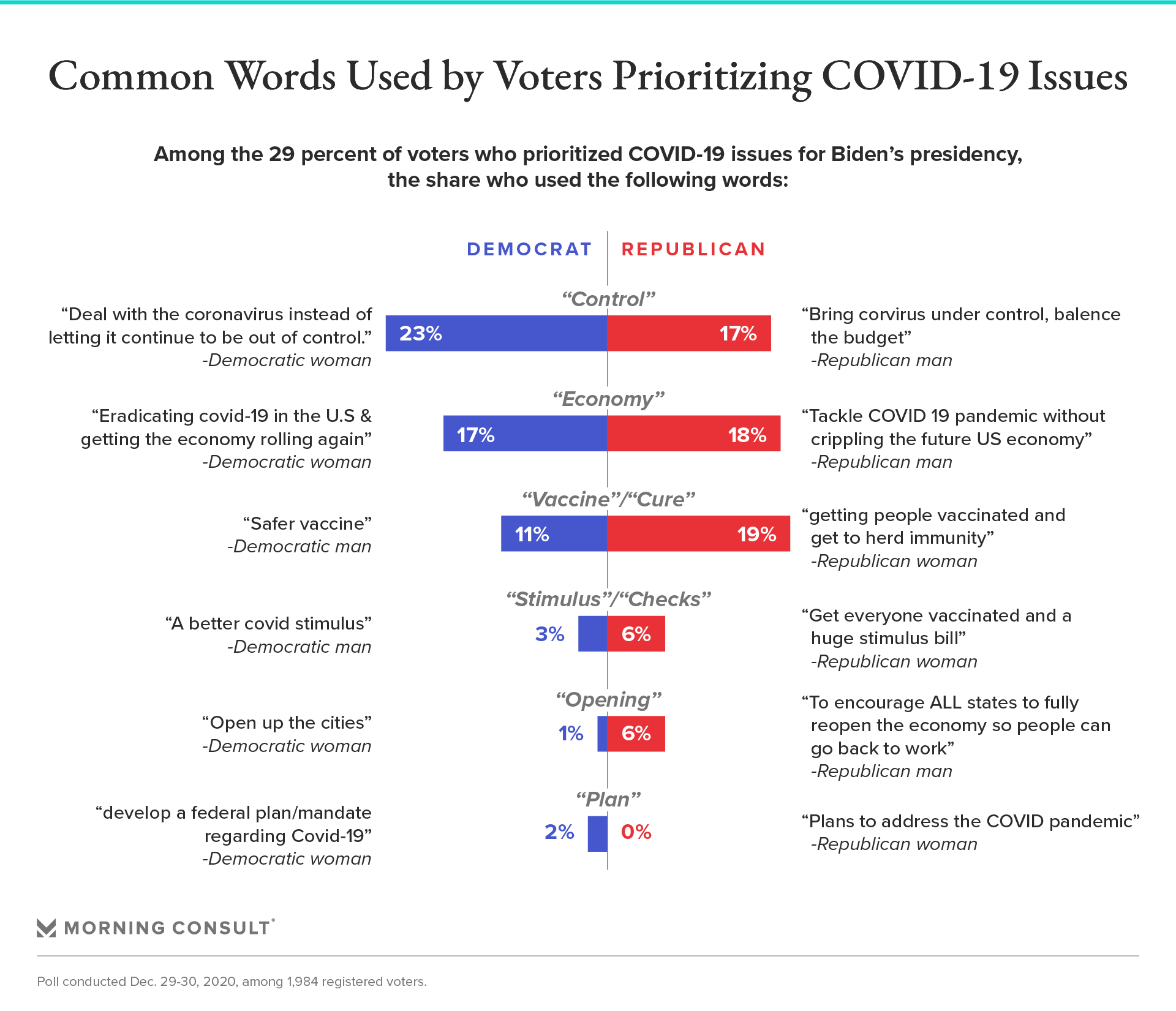 Among Democratic voters who prioritized coronavirus-related issues, 23 percent used the word “control,” alluding to efforts to “flatten the curve” of the pandemic, as Biden’s promised national mask mandate sets out to do. Republican voters, on the other hand, were most likely to prioritize vaccinations, with one woman suggesting it would get the country “to herd immunity.” 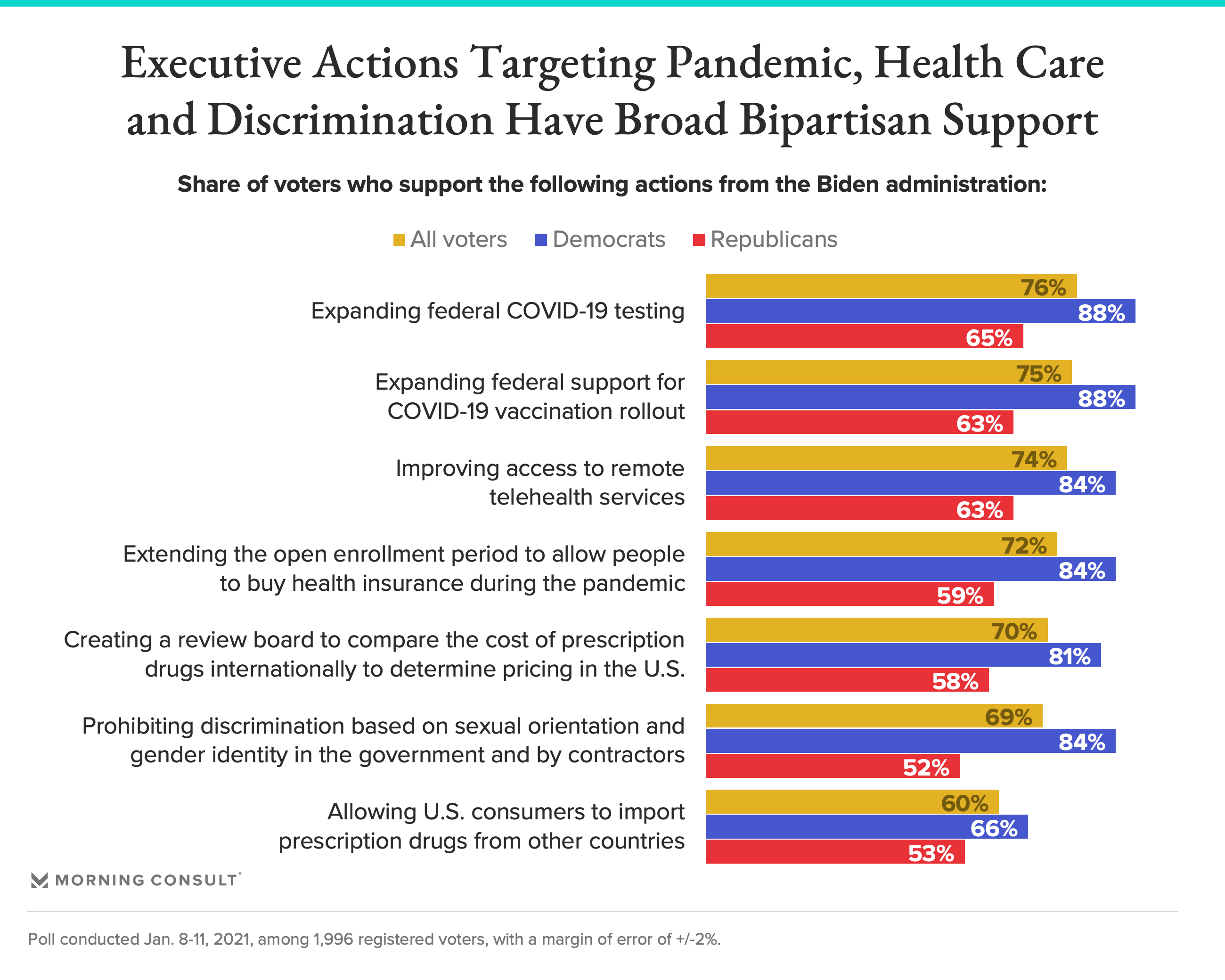 According to the Jan. 8-11 poll, 75 percent of voters would support Biden’s use of executive action to expand federal support for COVID-19 vaccination roll-out, including 88 percent of Democrats and 63 percent of Republicans. By comparison, voters are 15 percentage points less likely, at 60 percent, to support a national mask mandate, a measure that has the backing of 82 percent Democrats but just 36 percent of Republicans.

The survey examining support for 51 potential executive actions found that voter backing for more federal involvement in the vaccine rollout was only topped by support for the expansion federal COVID-19 testing (76 percent), another step that could help slow the spread of COVID-19 and put the country on track for an eventual recovery.