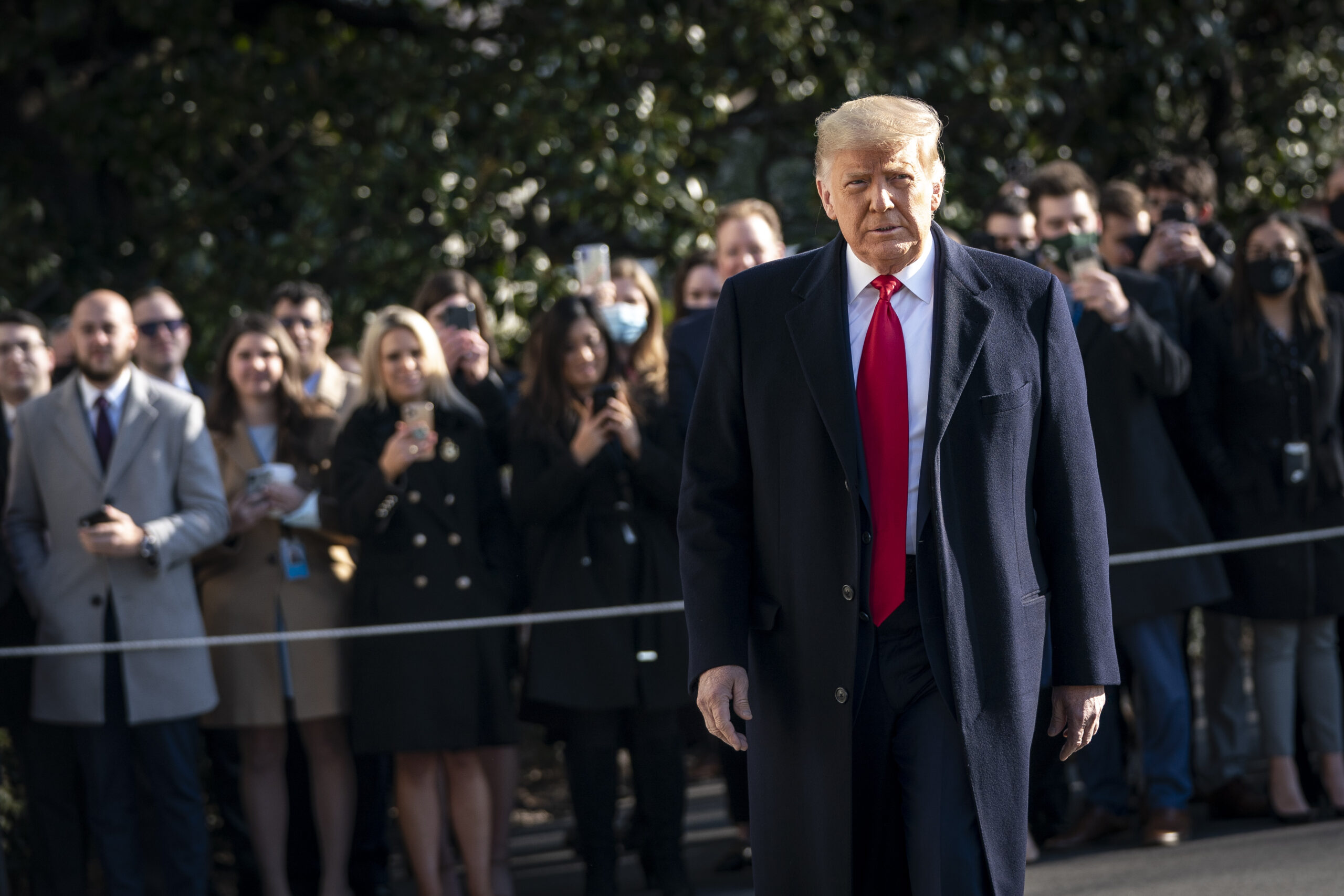 President Donald Trump turns to reporters as he exits the White House on Jan. 12. Trump's approval rating fell among GOP voters in the aftermath of the Jan. 6 riot at the Capitol, it has ticked back up in recent days. (Drew Angerer/Getty Images)
By Eli Yokley

President Donald Trump’s approval rating among Republican voters is back on the uptick after it dropped earlier this month following the deadly Jan. 6 attack on the U.S. Capitol by a group of Trump supporters, underscoring the political risk facing Senate Republicans who are set to decide the president’s fate in their chamber’s upcoming impeachment trial.

Morning Consult Political Intelligence tracking conducted Jan. 15-17 found 79 percent of Republican voters approve of the outgoing president, up 3 percentage points from 76 percent in polling conducted Jan. 10-12, before 10 House Republicans joined all Democrats in voting to impeach Trump on a charge of inciting the insurrection that resulted in the deaths of five people, including a Capitol Police officer. 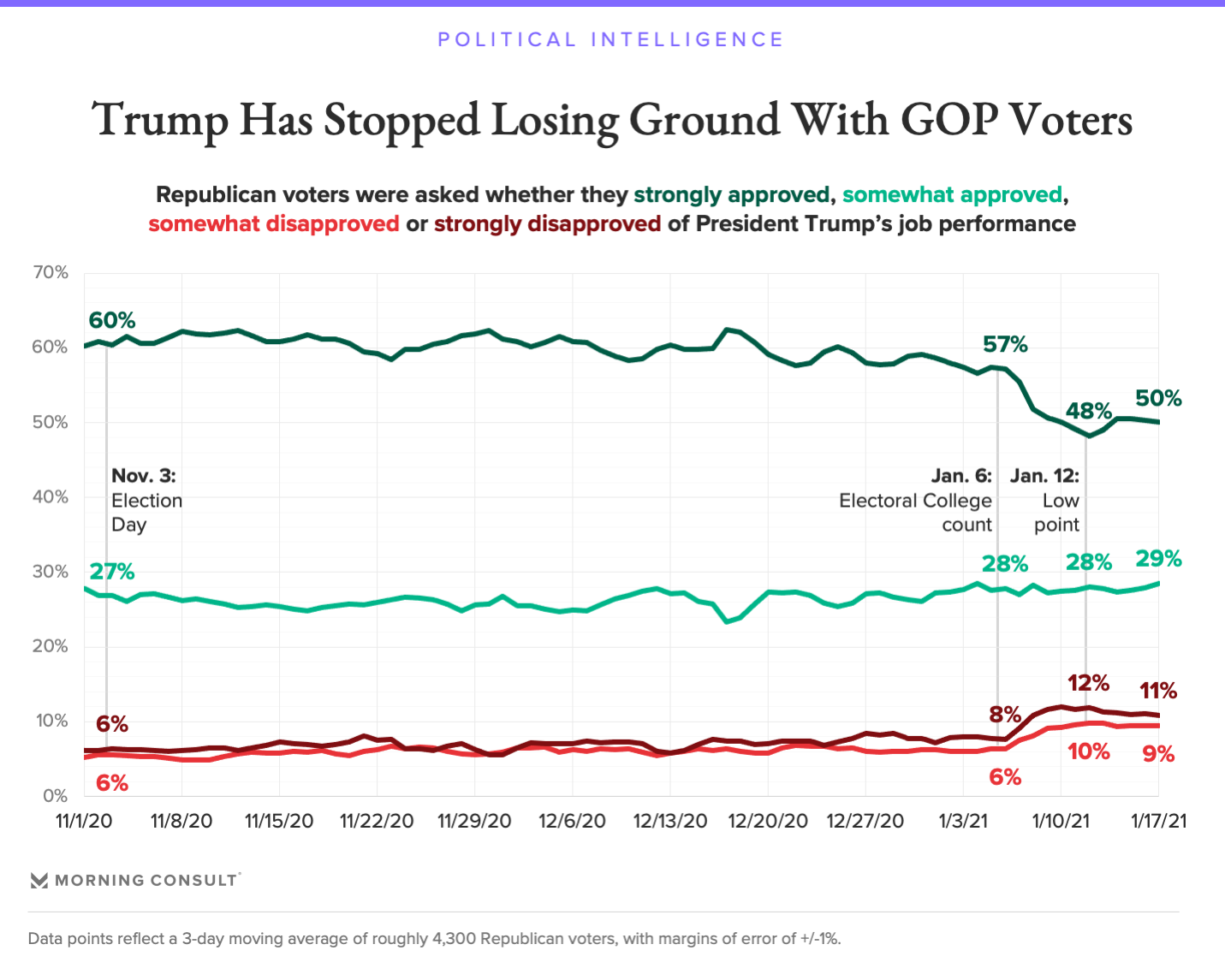 The samples included responses from more than 4,400 Republican voters, with margins of error of 1 point.

The numbers do not constitute a full recovery for a president whose approval had hovered in the mid- to upper-80s among party faithful for much of his tenure, but they do indicate that roughly 3 in 4 Republican voters will back the president through it all — including about 50 percent who “strongly” approve of him in the latest tracking. Similar numbers appeared in a new Morning Consult/Politico poll conducted Jan. 15-17, which showed the president’s intraparty standing had recovered to pre-Christmas levels.

According to both measures, about 1 in 5 Republican voters disapprove of Trump’s job performance — the same share as those who said they approved of the House’s move to impeach Trump and who would support a Senate conviction. 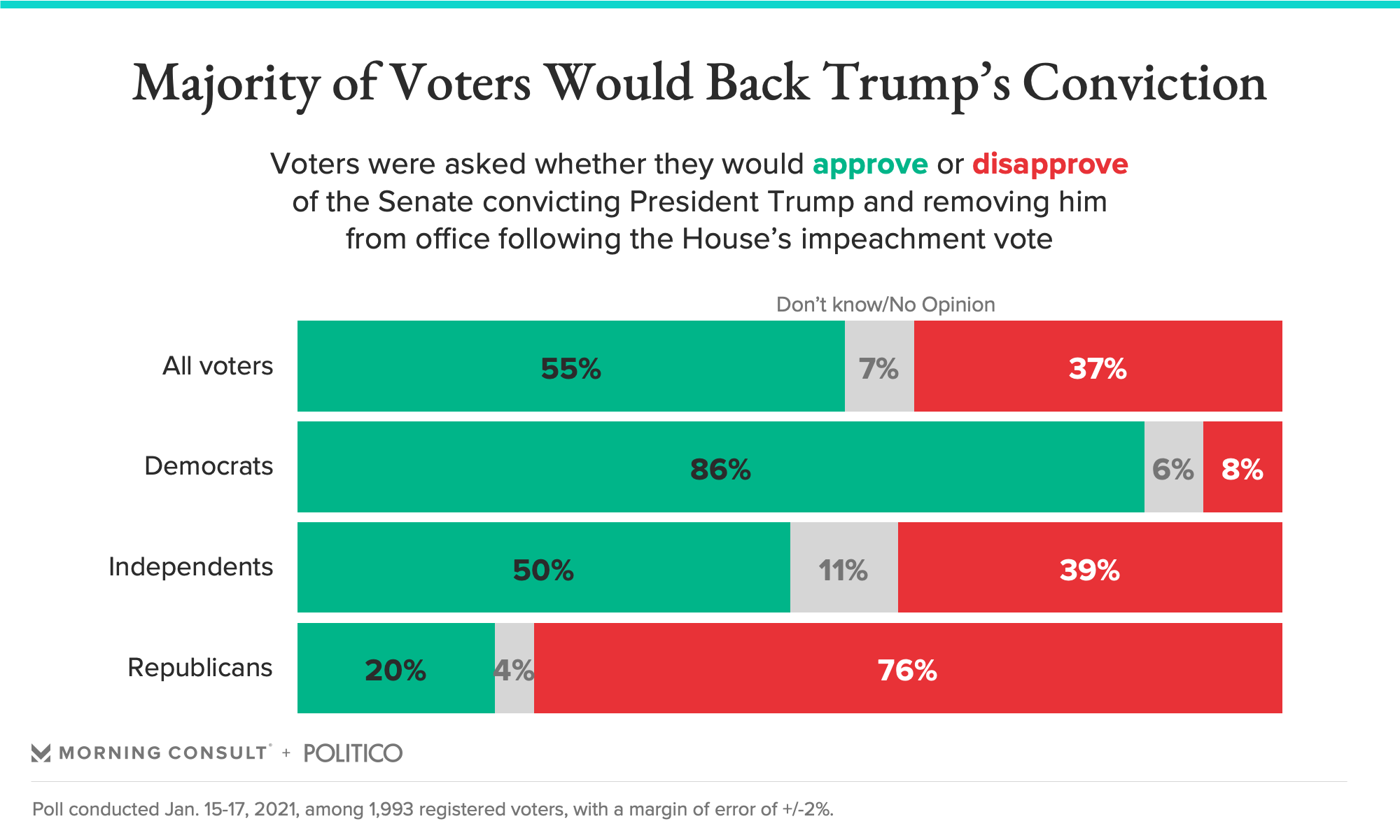 The Morning Consult/Politico poll highlights the political crosswinds facing Senate Republicans: 55 percent of voters overall — including 86 percent of Democrats and half of independents — said they would support Trump’s conviction, 5 points higher than the share who said the same in Morning Consult/Politico polling conducted ahead of the Senate’s February 2020 vote to acquit Trump from impeachment charges stemming from the Ukraine scandal. Both polls were conducted among roughly 2,000 registered voters, with 2-point margins of error.

Public support for conviction was nearly identical when voters were told that a Senate conviction could lead to Trump’s permanent disqualification from political office, a move that would only require a simple majority compared to the two-thirds required for conviction.

Republicans in power are largely getting low marks for their handling of the impeachment proceedings: 34 percent of voters back Trump’s handling, 30 percent back the approach taken by Republicans in Congress and just over a quarter support the posture of Senate Majority Leader Mitch McConnell (R-Ky.), who is said to privately believe that Trump deserves impeachment, but has not said how he will vote in the Senate trial.

Nearly half of Republican voters (47 percent) disapprove of McConnell’s approach to impeachment, while 32 percent approve of how he’s tackled the issue.