Analysis: The State of Americans’ Finances as Biden Begins His Presidency 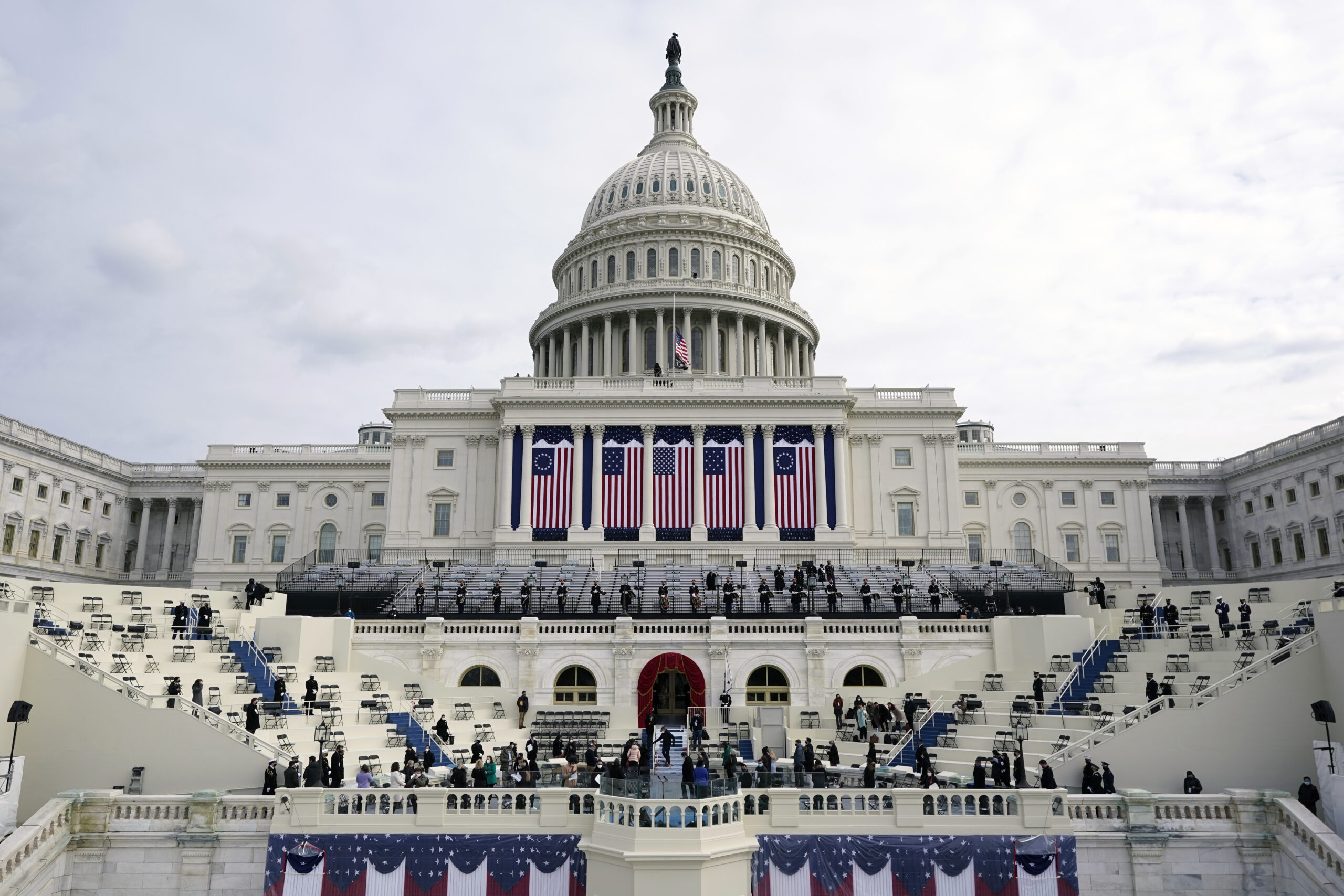 The Capitol during preparations for Joe Biden's inauguration on Jan. 18 in Washington. Biden will preside over an economy in which lower-income Americans are bearing a disproportionate burden of the pandemic-induced downturn, Morning Consult's John Leer says. (Patrick Semansky-Pool/Getty Images)
By John Leer

On Inauguration Day, President-elect Biden will inherit an economy under tremendous strain, as seen in the weekly unemployment claims, which remain elevated by historical standards, and in the drop in monthly payrolls in December.

These decreases in income and employment income have taken a toll on Americans’ personal finances, but aggregate monthly statistics from the government can mask weaknesses and vulnerabilities in Americans’ finances. This analysis provides a snapshot of Americans’ finances at the micro level on the eve of President-elect Biden’s inauguration. It asks whether Americans have enough money coming in to pay their bills and adequate savings to cover their expenses. It also reports how Americans feel about their financial condition compared to a year ago.

What the data shows: President-elect Biden will inherit an economy characterized by financial weaknesses and vulnerabilities concentrated at the low-end of the income spectrum. The majority of middle- and high-income Americans are able to set money aside at the end of the month to build their savings and reverse the financial harm they experienced as a result of the pandemic, but the same is not true for low-income Americans.

From a policy perspective, this analysis is the first step toward measuring the likely impact of the stimulus checks included in Biden’s proposed economic rescue plan. Given the current state of American’s finances described in this report, economic policy responses to the ongoing pandemic should target those Americans most financially vulnerable, most of whom are low-income Americans.

Incomes fall short of expenses for 15 percent of Americans in December, and low-income consumers are the most likely to report a shortfall. In December, 15 percent of Americans did not earn adequate income to cover their monthly expenses, which means that they would have needed to rely on savings, debt or charitable gifts to pay their bills. An additional 24 percent had no income left over to save after paying their expenses.

There are significant differences in the finances of Americans across the income spectrum: 22 percent of low-income Americans did not earn adequate income to cover their monthly expenses in December, compared to 9 percent and 7 percent of middle- and high-income American adults, respectively. 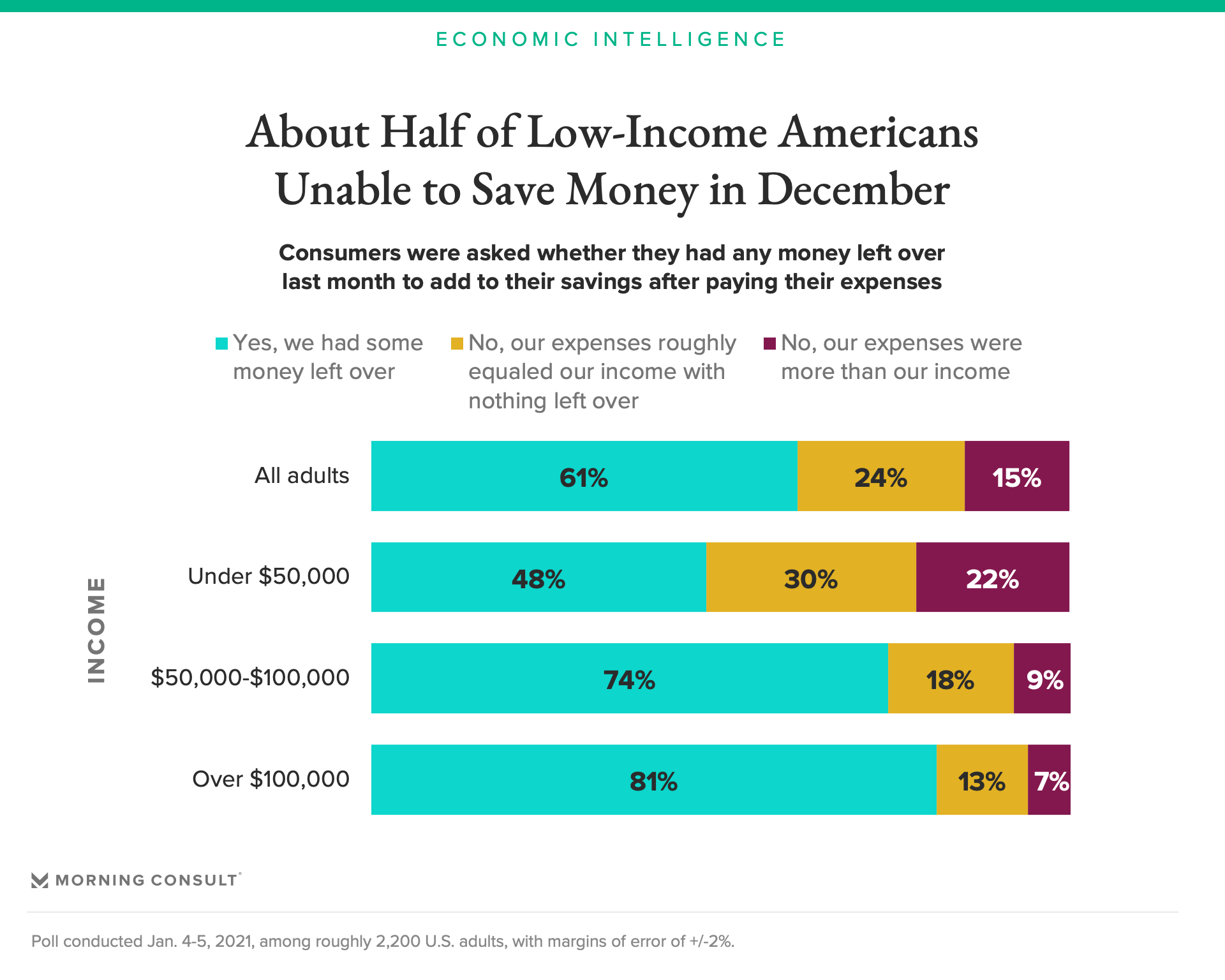 In addition to experiencing increased financial insecurity, Americans who do not have money left over at the end of the month after paying their expenses are unable to save or invest, thereby limiting their ability to benefit from rising stock and home prices.

How to measure the severity of the problem: The distribution of monthly income shortfalls in December was heavily skewed to the two extremes. One-third of Americans with incomes below their expenses fell short in December by less than $100, while 19 percent fell short by over $500. In other words, there are significant differences in terms of the strength of Americans’ finances even among people who are unable to pay their expenses with their incomes. 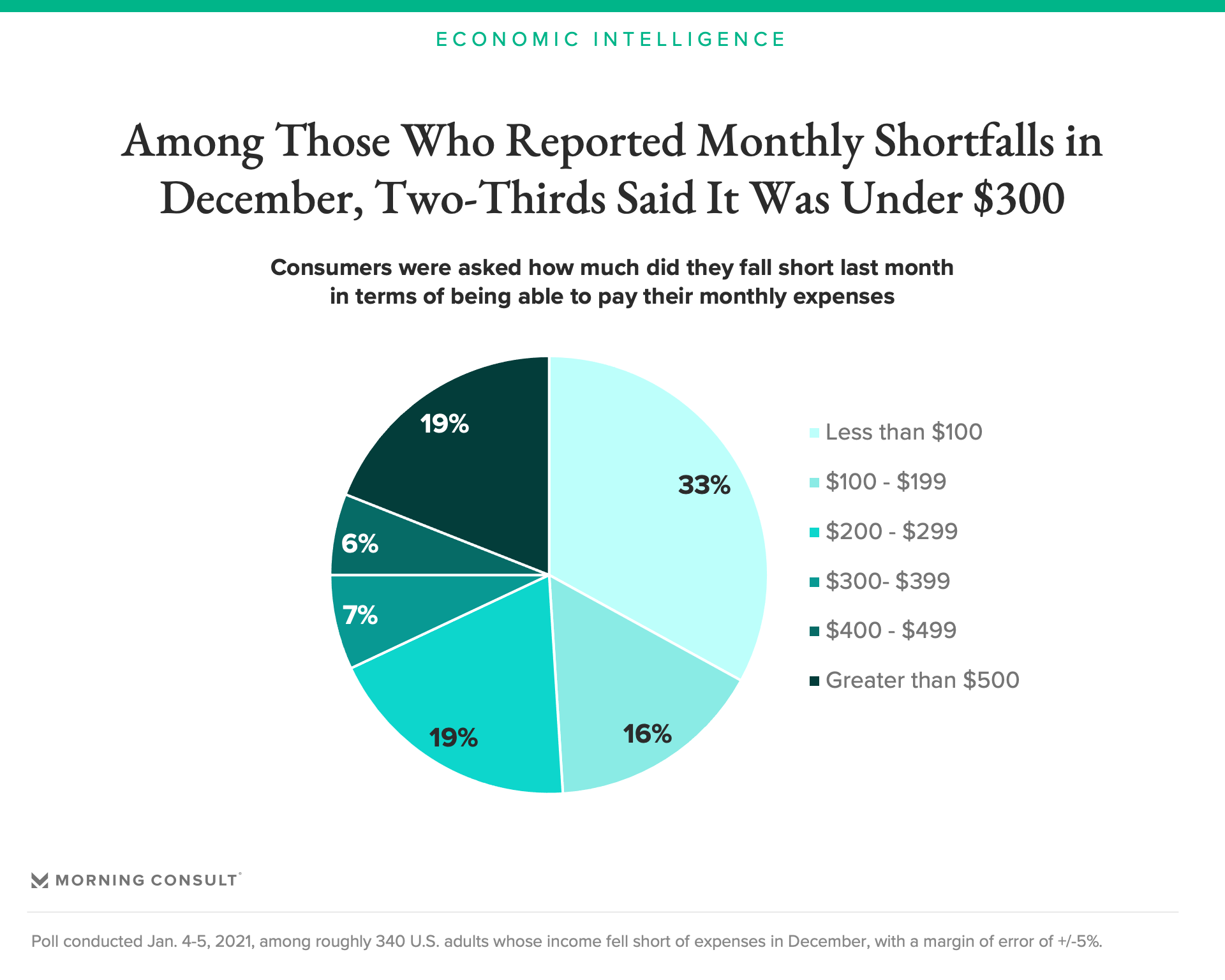 For those Americans whose incomes fell short of their expenses in December, the average dollar value they fell short was $273.

The way this was calculated: Consumers who previously indicated that their incomes fell short of their expenses in December were asked in follow-up questions to indicate the range of the budget shortfall and then in an open-ended question to list the amount of their budget shortfall. Histograms of the open-end responses confirm that the dollar values are normally distributed within each of the value ranges, and that $700 is the outlier-adjusted average in the top dollar value category.

Thus, the average income shortfall in December reflects the share of respondents in each of the ranges multiplied by the midpoint of the dollar value ranges and the average in the top value category (e.g., $50, $150, $250, $350, $450 and $700). This average value is roughly consistent with the graph above that shows 68 percent of this group fell short in December by less than $300.

Savings are unlikely to provide a backstop for consumers who can’t cover their monthly expenses. Low- and middle-income Americans have eaten into their savings to pay their monthly expenses over the past five months. As of December, 32 percent of low-income Americans lack adequate savings to pay their basic expenses for a full month, up from 25 percent in June. In other words, Americans who are most likely to be unable to pay their expenses using their incomes are also the most unlikely to have savings they can use to help them pay their expenses. 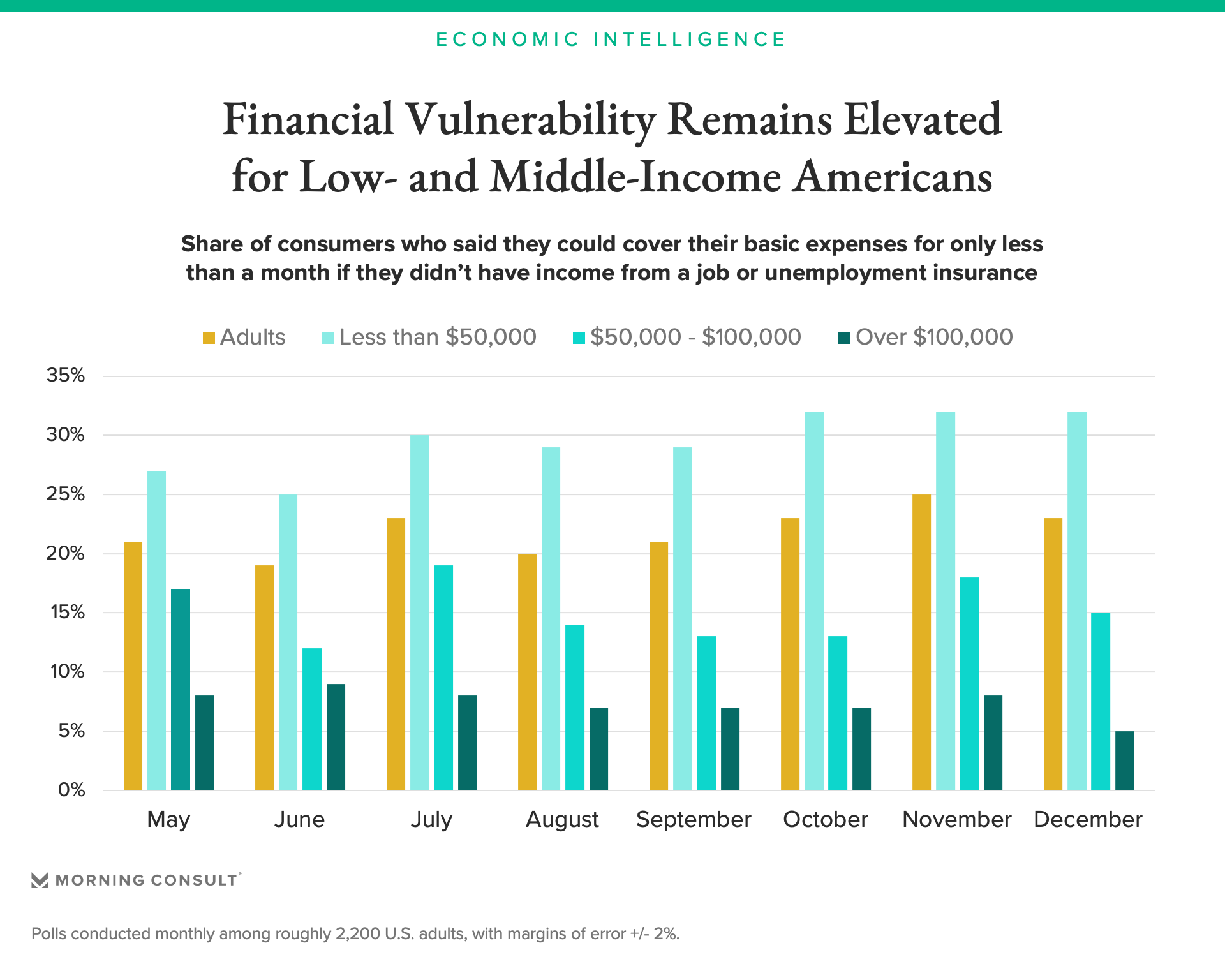 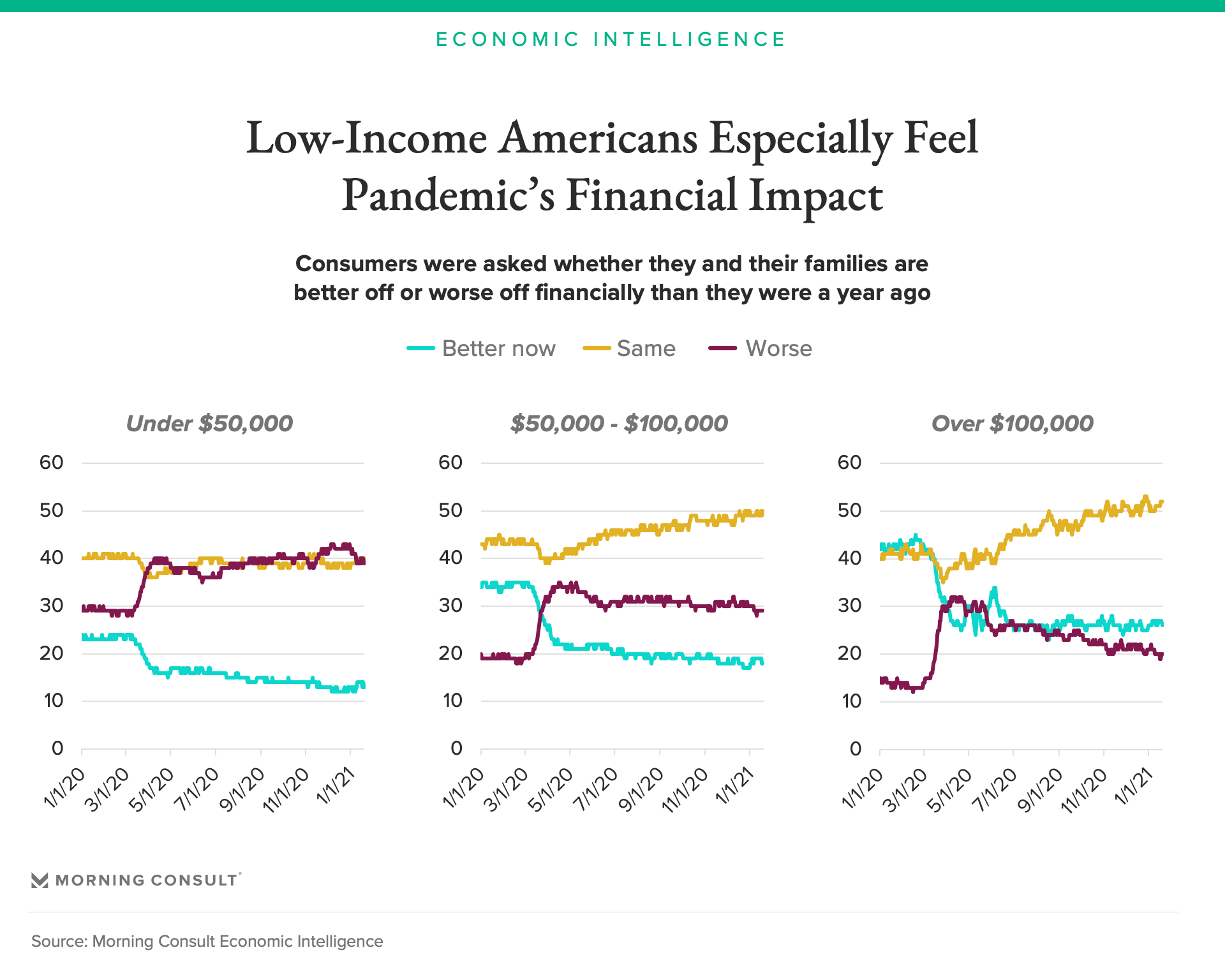