Most Voters Say Trump Did Not ‘Make America Great Again’

46% classify Trump as “one of the worst” American presidents 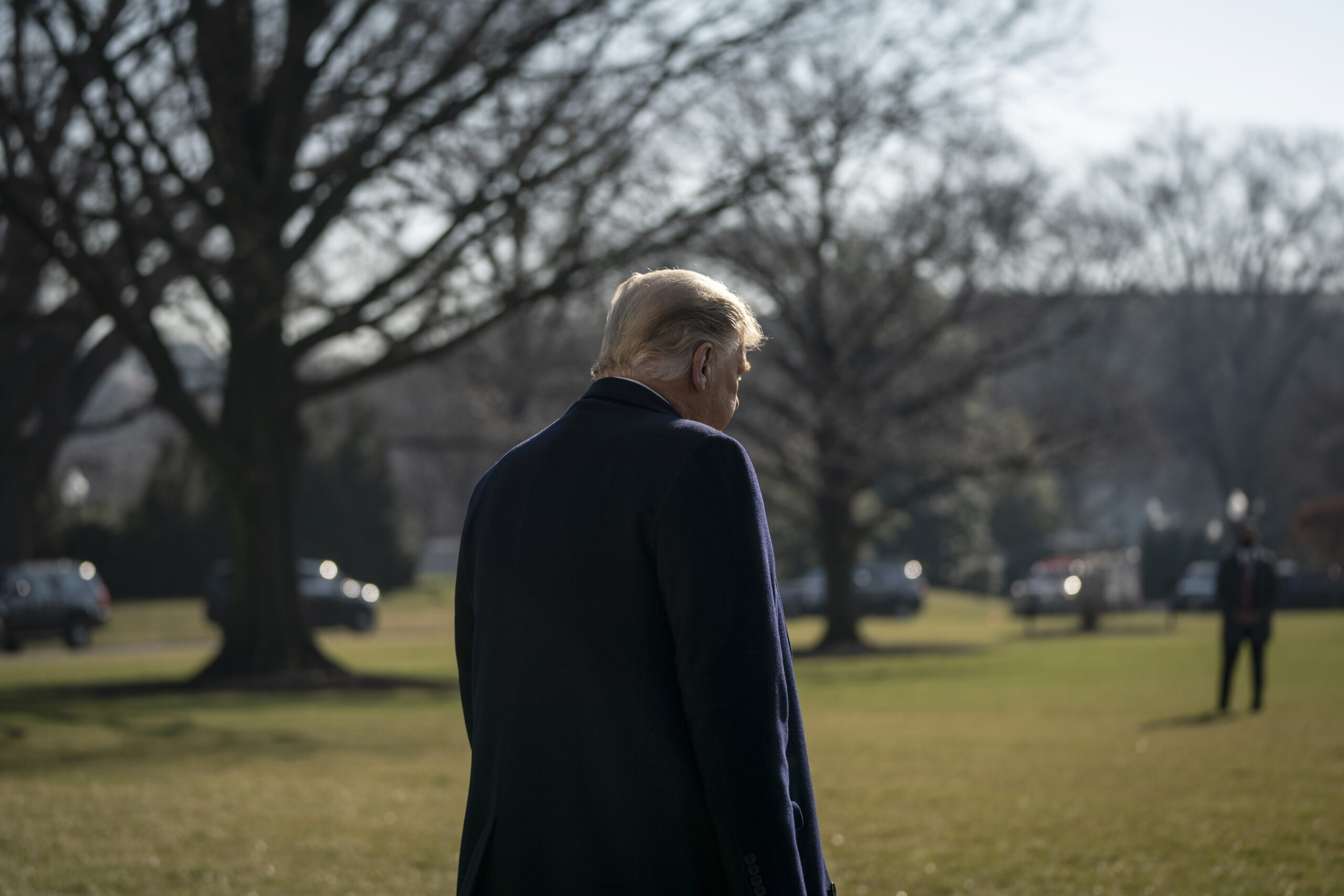 President Donald Trump walks toward Marine One on the South Lawn of the White House on Jan. 12. As he prepares to leave the White House, new polling shows most voters feel he has failed on his 2016 promise to "make America great again." (Photo by Drew Angerer/Getty Images)
By Eli Yokley

President Donald Trump leaves the White House as a disappointment to a majority of voters, who say he failed to fulfill the 2016 campaign promise that resonated so deeply with his supporters: to “make America great again.”

According to a new Morning Consult/Politico poll, 57 percent of voters — including 85 percent of Democrats and 57 percent of independents — say Trump did not restore America’s greatness during his time as president. Roughly 2 in 5 voters say Trump delivered on his slogan — driven by 80 percent of Republican voters who hold that view. 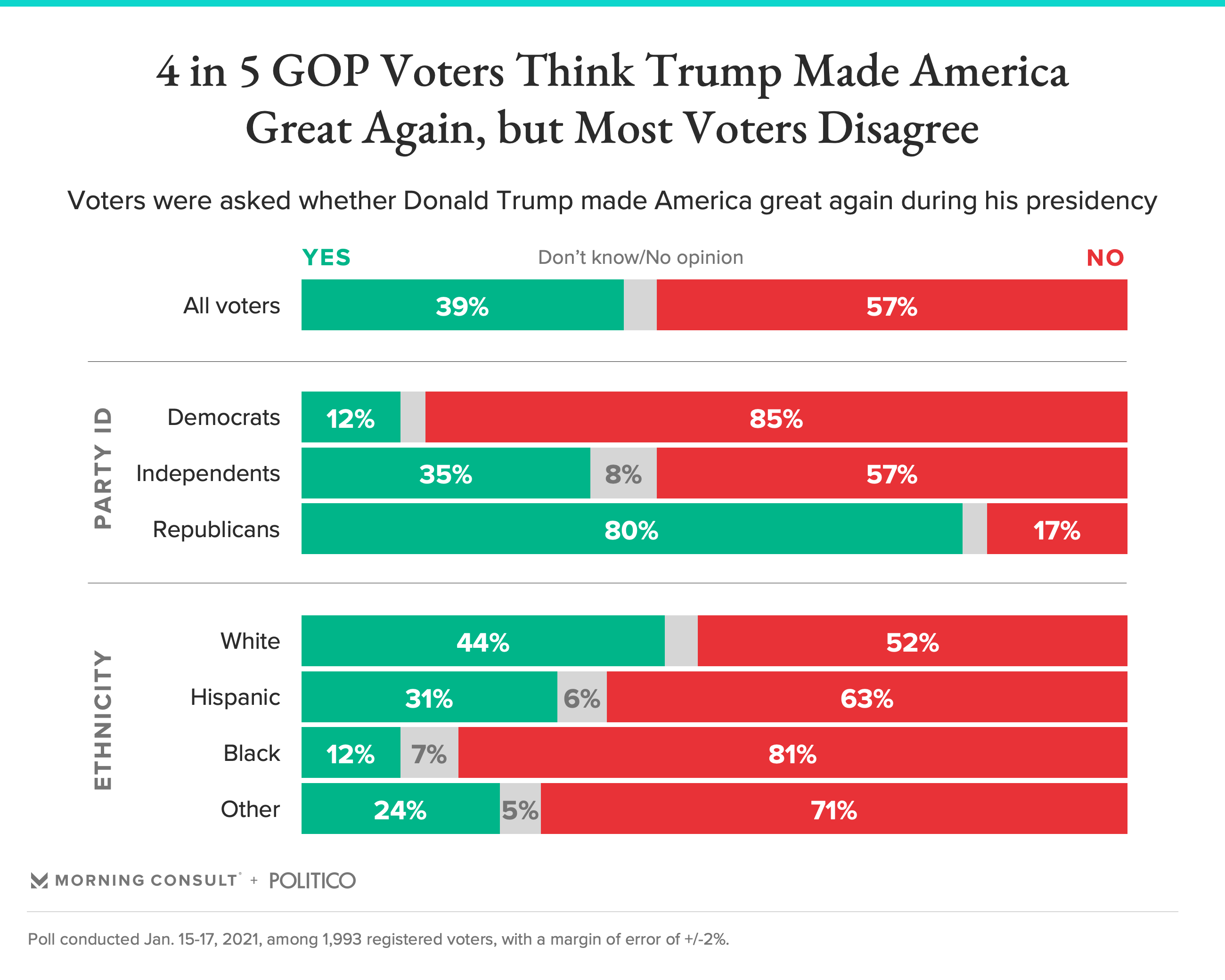 Since the phrase, previously used by Ronald Reagan in his 1980 presidential campaign, was reintroduced several years ago, critics have accused Trump of wielding it to tap into nostalgia among white Americans for a period of time that was decidedly worse for people of color. Those differences in opinion were borne out by the survey findings: While 44 percent of white voters said Trump achieved his campaign promise, less than a third of nonwhite voters said the same.

Among voters who prioritize the economy, the largest voting bloc by issue, 45 percent said Trump made America great again, while 50 percent said he did not.

In a sharp break from historical norms, Trump used the lame-duck period to try to convince Americans that he didn’t actually lose the election, rather than taking the time to make a positive case for any triumphs of his presidency. That decision helped create the climate for the fatal Jan. 6 insurrection attempt at the U.S. Capitol — for which nearly two-thirds of voters hold him responsible —  and as he leaves office, most voters believe he was, at best, a subpar president. 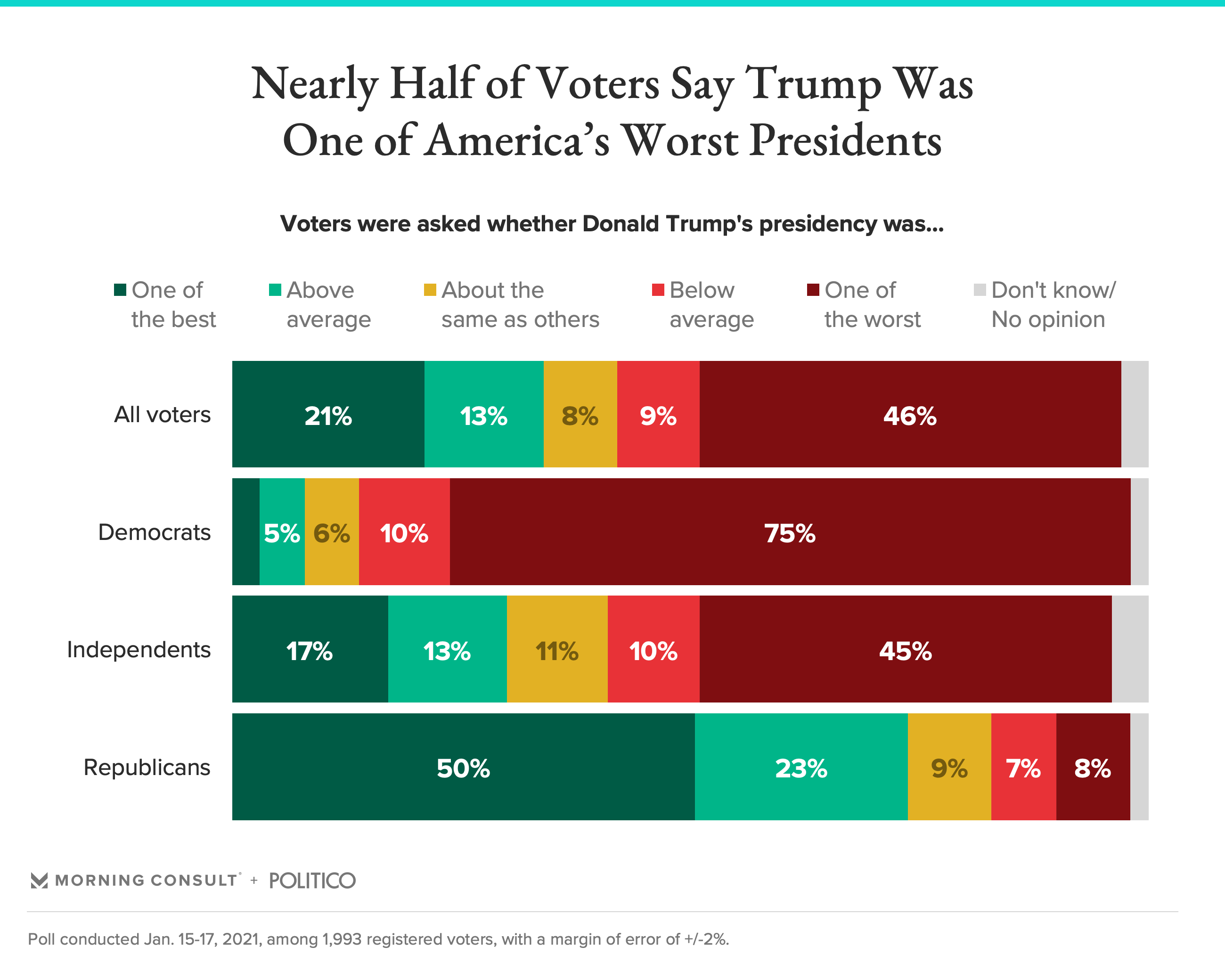 Overall, 46 percent of voters said Trump is “one of the worst presidents” to lead the United States, including 3 in 4 Democrats and nearly half of independent voters. Another 9 percent say Trump was below average.

Among Republican voters, 15 percent describe Trump as either below average or one of the worst presidents to lead the United States. The sentiment aligns closely with GOP voters’ views of Trump’s job performance: Half say he was one of America’s greatest leaders, close to the share who hold “strongly” positive views of the outgoing leader in the same survey.