3 in 4 voters back call to end political division, even if their policy goals aren’t met 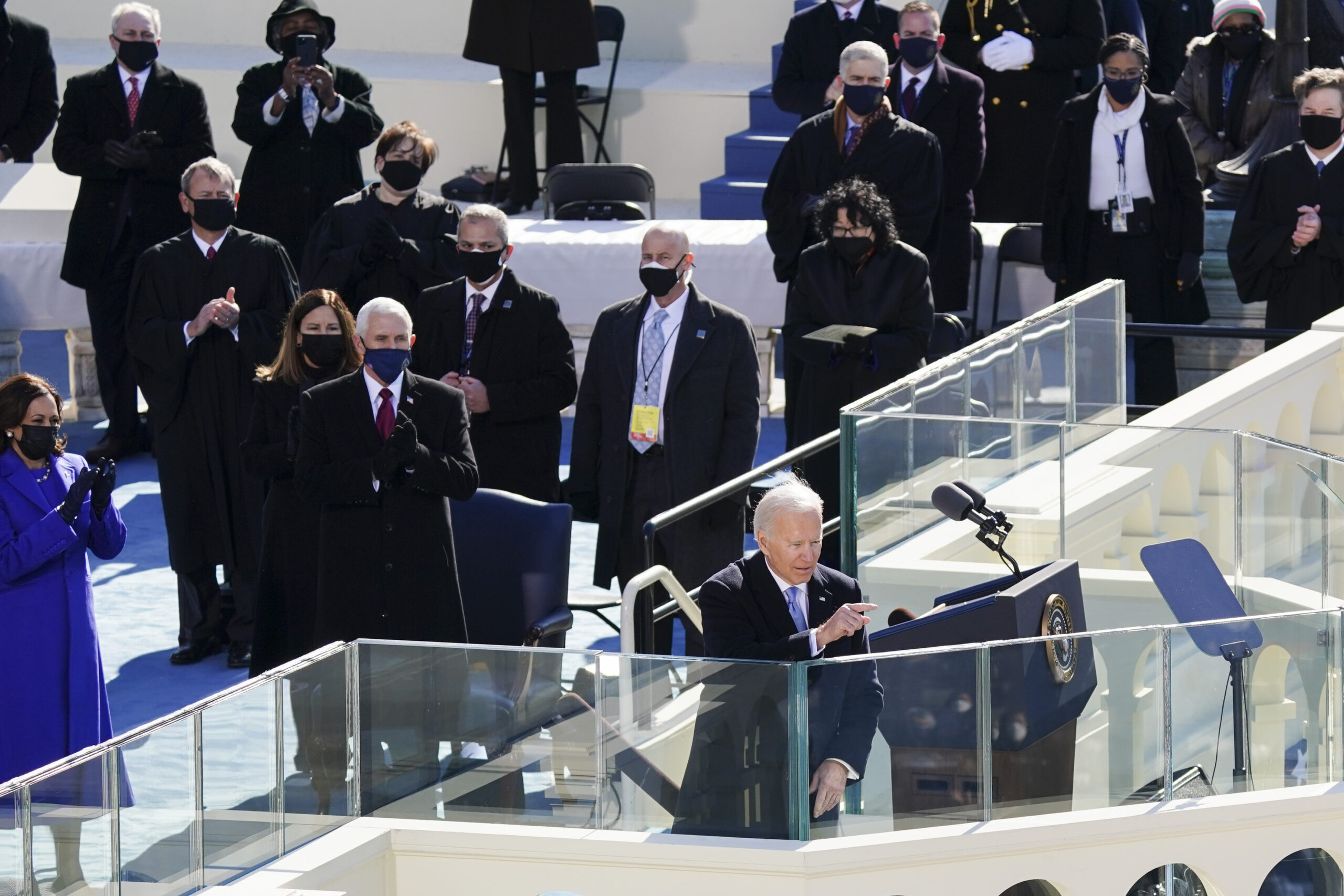 President Joe Biden waves after delivering his inaugural address on the West Front of the U.S. Capitol on Wednesday. Biden's call for an end to the political and cultural divisions that have increasingly defined American life resonated with voters, new polling shows, especially among those who tuned in for the speech. (Kevin Dietsch-Pool/Getty Images)
By Eli Yokley

President Joe Biden’s inaugural pitch for Americans to come together and stem the country’s widening political and cultural divisions is popular with voters of both parties.

A new Morning Consult poll conducted after Wednesday’s speech found large majorities of voters back the new president’s call to end the political division in the United States, and agreed that having a leader who will bring the nation together is more important than having one who represents their preferred policy positions and values – a notion that will be put to the test when Biden takes his policy agenda to Capitol Hill.

At the dawn of his presidency, Biden’s message to the nation was bare on policy, focusing instead on offering Americans a prescription for an end to the kind of divisive politics that led to a riot — fueled in part by his predecessor’s anti-democratic rhetoric — on the very platform from which he spoke.

“We must end this uncivil war that pits red against blue, rural versus urban, conservative versus liberal,” he said. “We can do this if we open our souls instead of hardening our hearts – if we show a little tolerance and humility.”

The poll found most voters are receptive to the message. 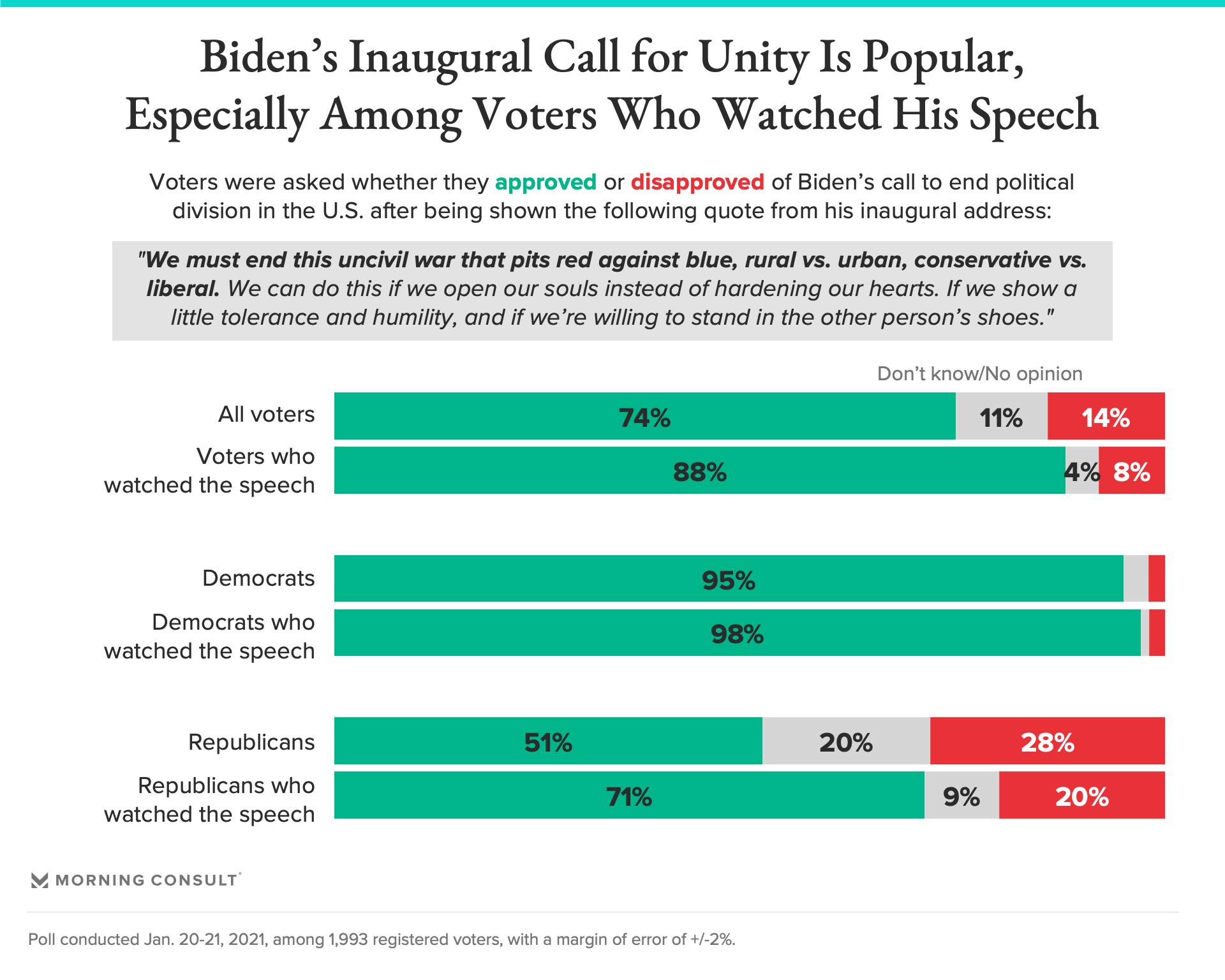 Even before Biden’s inauguration, voters’ receptiveness to tighter American bonds was apparent: An analysis of open-ended responses from a survey of voters last month found several responses prioritizing concepts like “restoring,” “fixing,” and “unity,” or Washington working or coming “together” for Biden’s first term. Throughout his campaign against President Donald Trump, Morning Consult/Politico polling found Biden with double-digit advantages over the incumbent when voters were asked whom they trusted more to unite the country.

According to the latest survey, voters are at least willing to say they will shirk their preferred policy outcomes in exchange for less division. 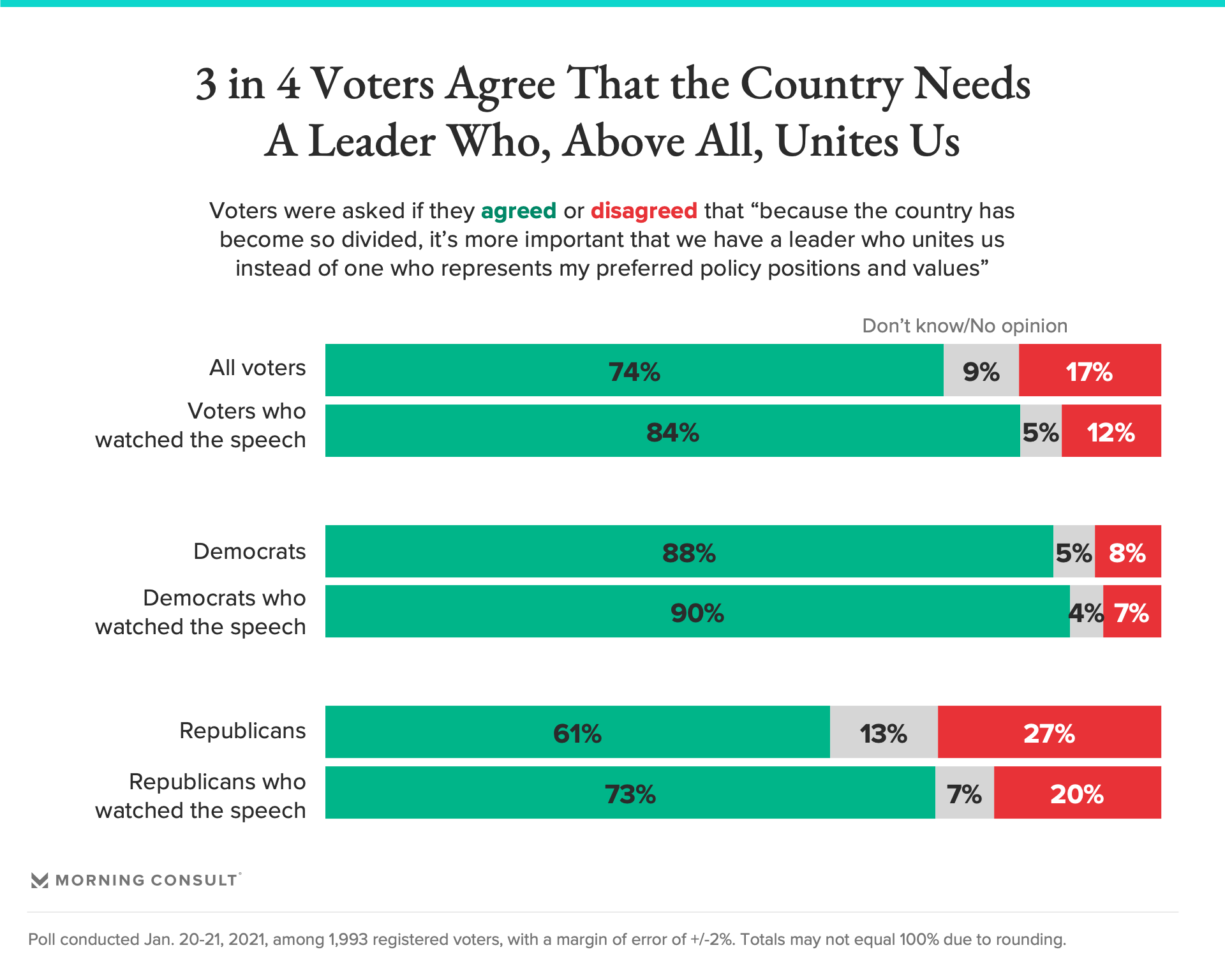 Three in 4 voters said they agreed that it is more important for America to have a leader who unites the country than it is to have one who represents their preferred policy positions and values. Nine in 10 Democrats aligned with the statement, along with 61 percent of Republicans — and 73 percent of Republicans who watched Biden’s midday address.

The majority of voters (58 percent) said they watched some or all of Biden’s speech. The figure was driven by the 80 percent of Democrats who said they tuned in, but also included 47 percent of self-described independents and 39 percent of Republicans. 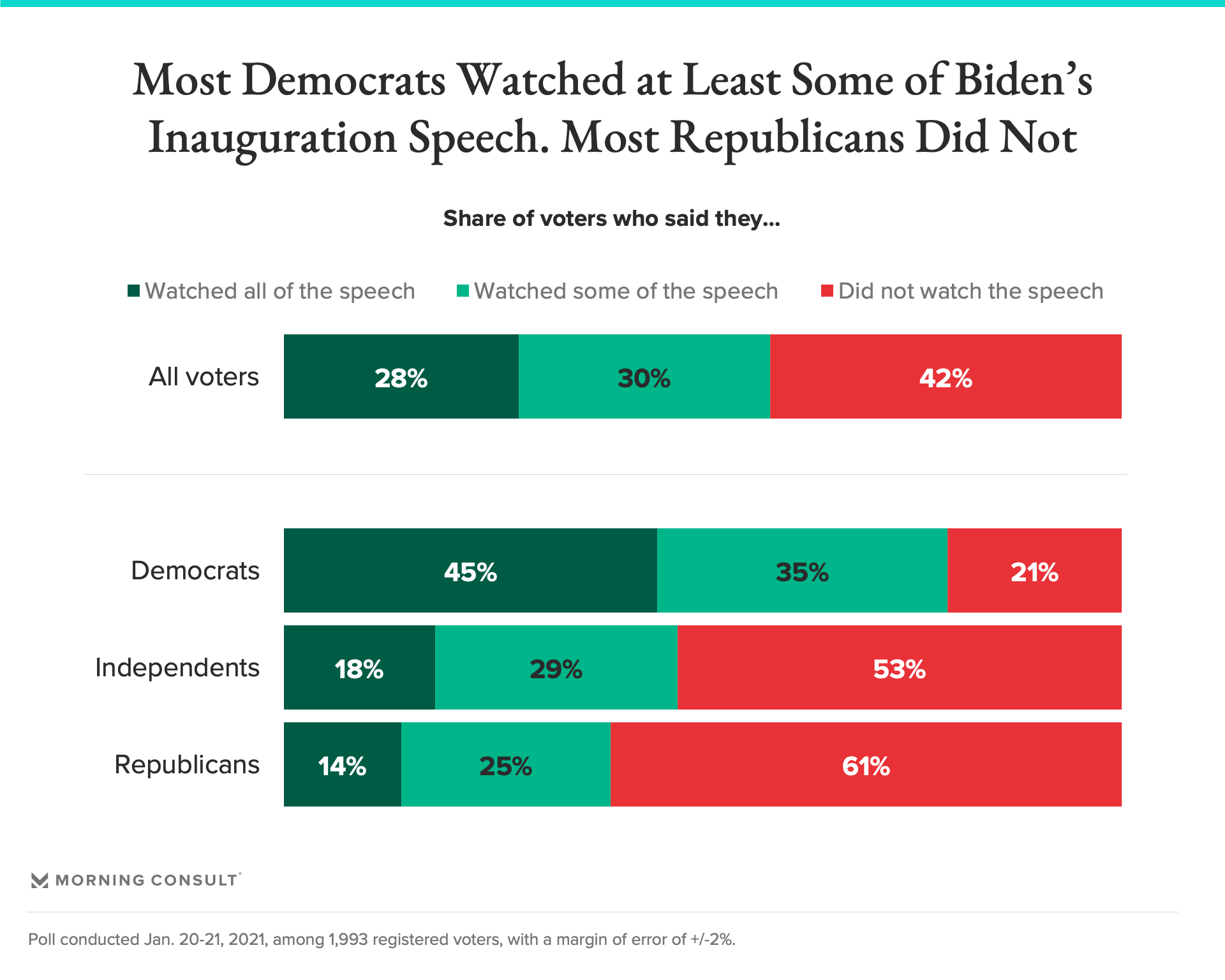 Those Republicans who tuned in are not necessarily less conservative than their peers who opted against watching, at least when it comes to policy: They are about as likely as the broader pool of GOP voters to oppose Biden’s move to block construction of the Keystone XL pipeline or end restrictions on immigration and travel from several predominantly Muslim countries, according to the survey. Rather, their response to Biden’s calls for unity suggests the new president’s speech may have resonated with them.

Among the voters who watched, 84 percent said the speech was “excellent” or “good,” including nearly all of the Democrats surveyed and 57 percent of Republicans.

Watchers were most likely to characterize the speech as presidential (84 percent), hopeful (83 percent) and optimistic (81 percent), each of which were among the top descriptors used by both Republicans and Democrats. Another 71 percent of voters who tuned in — including 80 percent of Democrats and 49 percent of Republicans — said the speech was unifying.

The survey has an overall margin of error of 2 percentage points, while margins of error for responses from voters who watched the speech range from 3 points to 6 points.

Along with Biden’s ascension at a pivotal moment for the country, Inauguration Day also featured several historic firsts. The bulk of voters said positive terms like hopeful, inspired and proud described how they felt about the inauguration of Vice President Kamala Harris — who along with being the first female vice president is also the first Black and South Asian American to meet that mark — but the question yielded significant breaks when accounting for race. 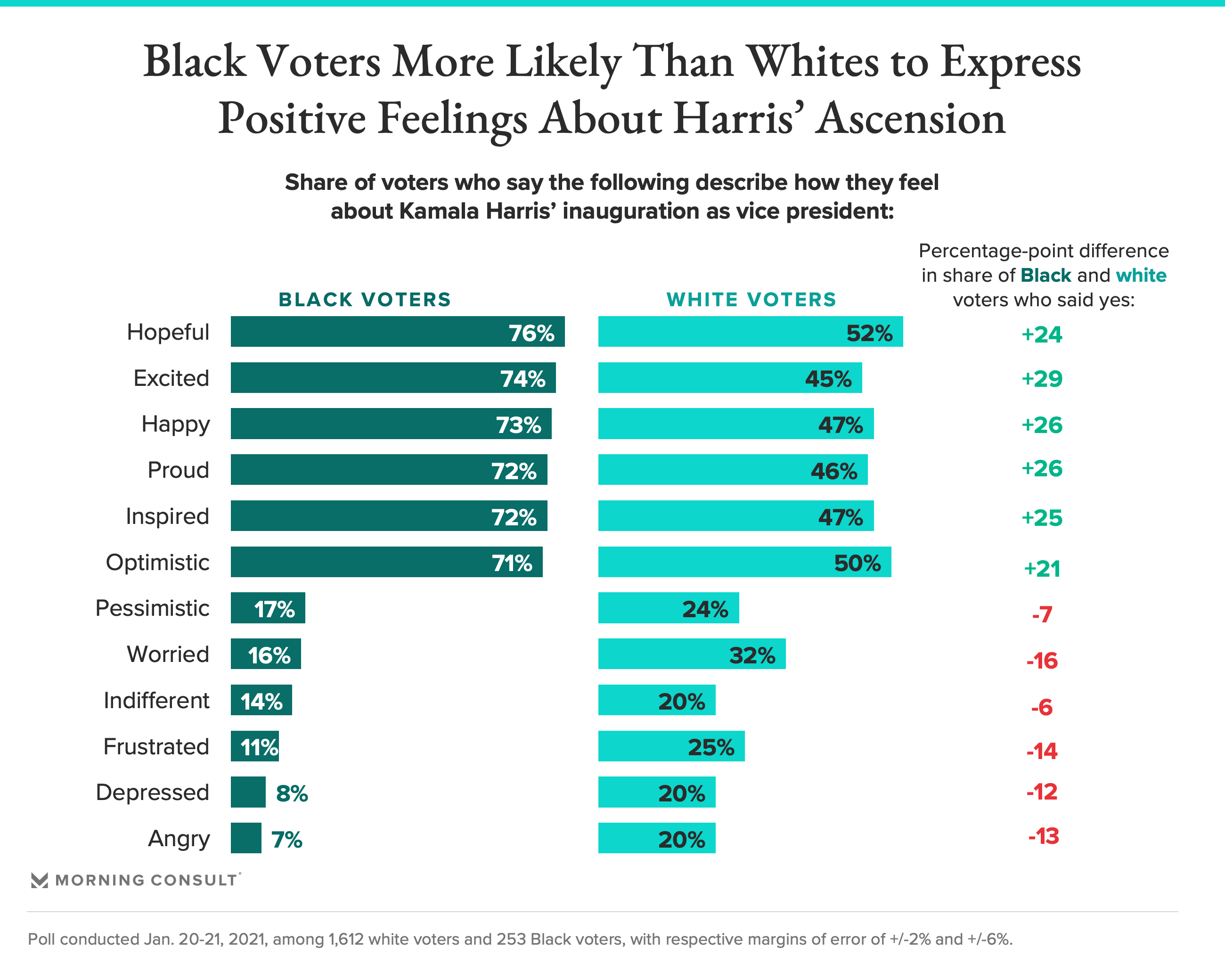 According to the survey, Black voters were more than 20 points more likely than white voters to use positive descriptors to describe their feelings about Harris’ elevation — including a 29-point gap on expressing excitement. By double digits, white voters were more likely than Black voters to say they were angry, frustrated or worried about Harris’ new position.